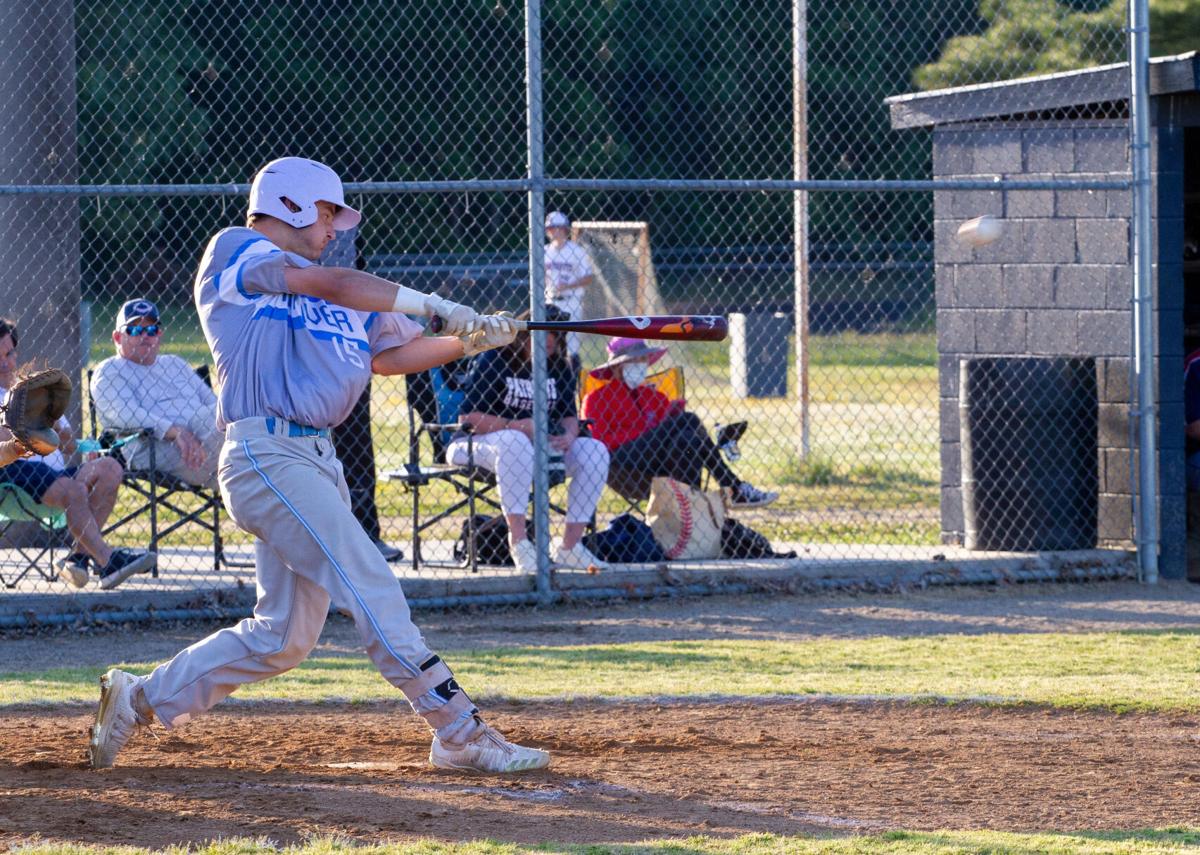 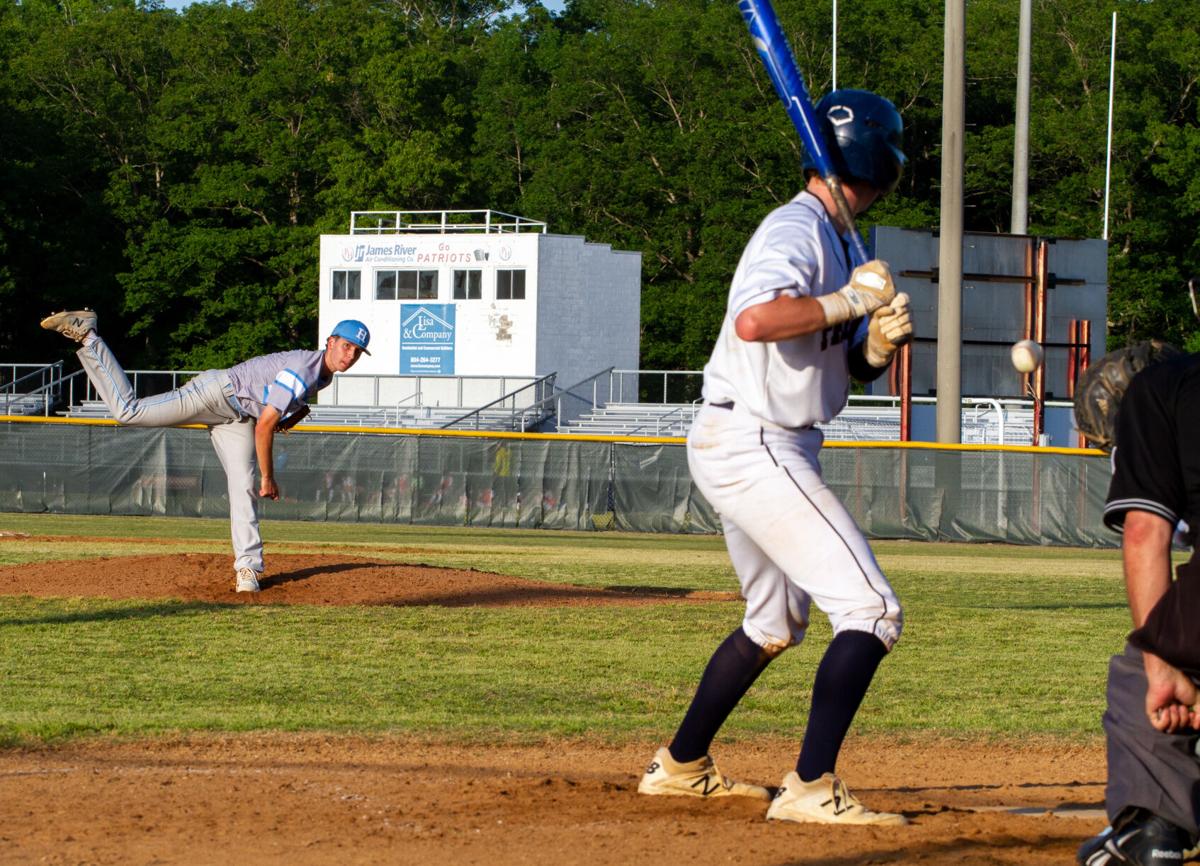 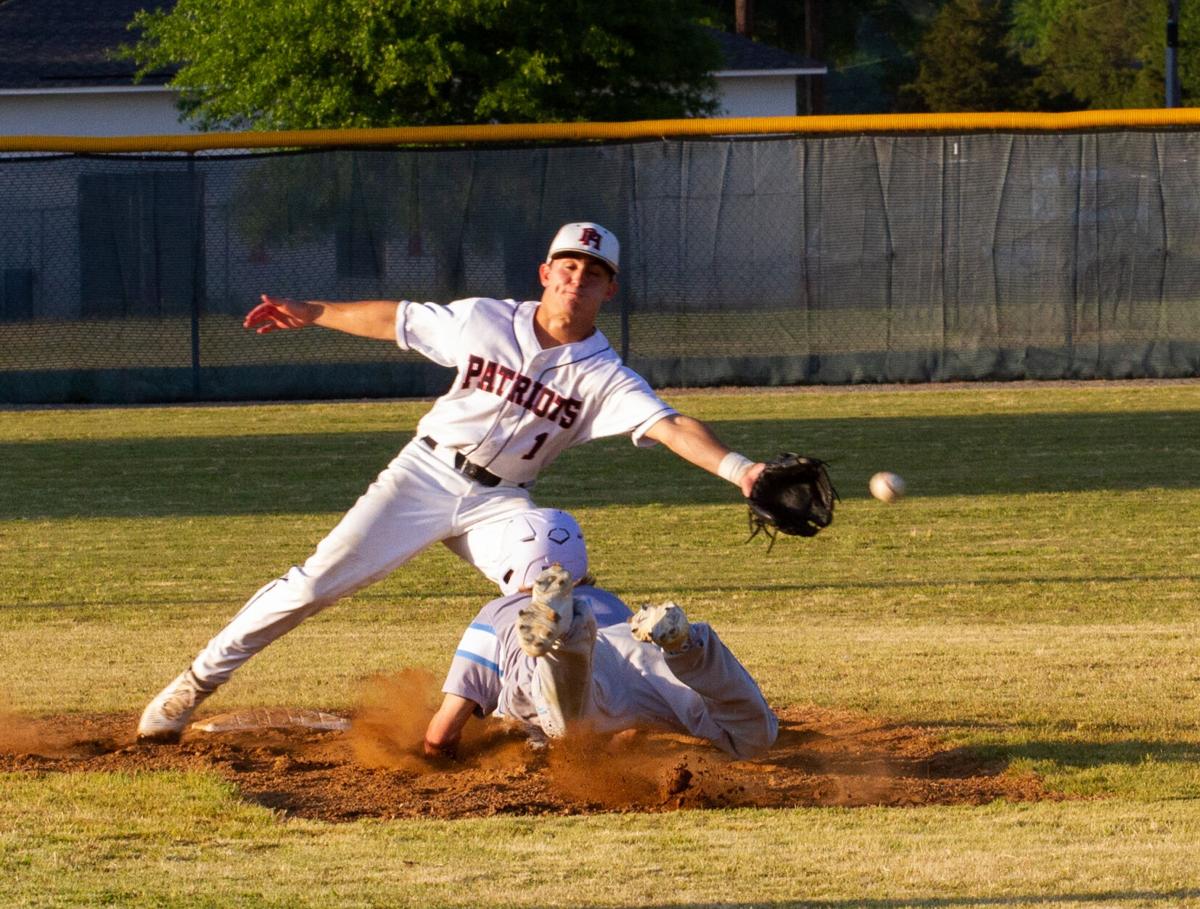 ASHLAND, Va. -- Hanover's William Flora steals second as Patrick Henry shortstop Cole Mallory tries to haul in the pickoff throw in the Hawks' 14-6 win over the host Patriots on Tuesday, May 18, 2021.

Alvis belted a three-run home run to put the Hawks ahead for good in the second inning and knocked in another run with a double in the fourth to give his team most of the runs it needed for a 14-6 victory over the Patriots.

His second-inning home run ignited a Hanover offense that went down in order in the first inning.

“We had a couple of bad at-bats in the first inning,” Alvis said. “Then we finally got some guys on base.”

Patrick Henry starting pitcher Eoin Rossman got the first two Hawk batters of the second inning out. But then he gave up back-to-back walks to Charlie Rohr and Nolan Williamson. That set the table for Alvis, who wasted no time pouncing.

“I just kind of stuck with my approach, sat on the first pitch and drove it,” Alvis said. “It was a pretty good pitch.”

The energy level changed in the Hanover dugout after Alvis’ big blast.

“After the top of the first we were kind of flat, didn’t have a lot of energy,” Alvis said. “[Hanover starting pitcher] Chase Hustead did his thing and got three outs pretty quick, so we were kind of feeling a little bit better. After the home run, I just felt like everything was up from that point.”

Alvis finished the evening perfect at the plate, going 2-for-2 with two walks in his four appearances at the plate in the game.

Two other Hanover hitters hit for extra bases: Caden Plummer and Charlie Rohr each went 2-for-4 with a double and two RBI.

But the Patriots had their share of highlights. Rossman went 2-for-3 with a triple, a double, and an RBI, and Cole Mallory went 2-for-4 with a double and two RBI.

“Patrick Henry gave us everything we wanted coming in here,” said Hanover head coach Tyler Kane. “They made all the routine plays and their pitchers threw enough strikes to keep us off-balance with some good off-speed pitches as well.

“It kind of got away from us at the end, but I thought we competed through six innings of baseball tonight,” Hart said. “That’s all you can ask as a coach.”

The headline in the May 26 print edition of the Mechanicsville and Ashland-Hanover Locals erroneously said "Alvis powers Hanover to win over Raiders." I have no idea what I was thinking. I regret the error — Dave Lawrence.

ASHLAND, Va. -- Hanover's William Flora steals second as Patrick Henry shortstop Cole Mallory tries to haul in the pickoff throw in the Hawks' 14-6 win over the host Patriots on Tuesday, May 18, 2021.