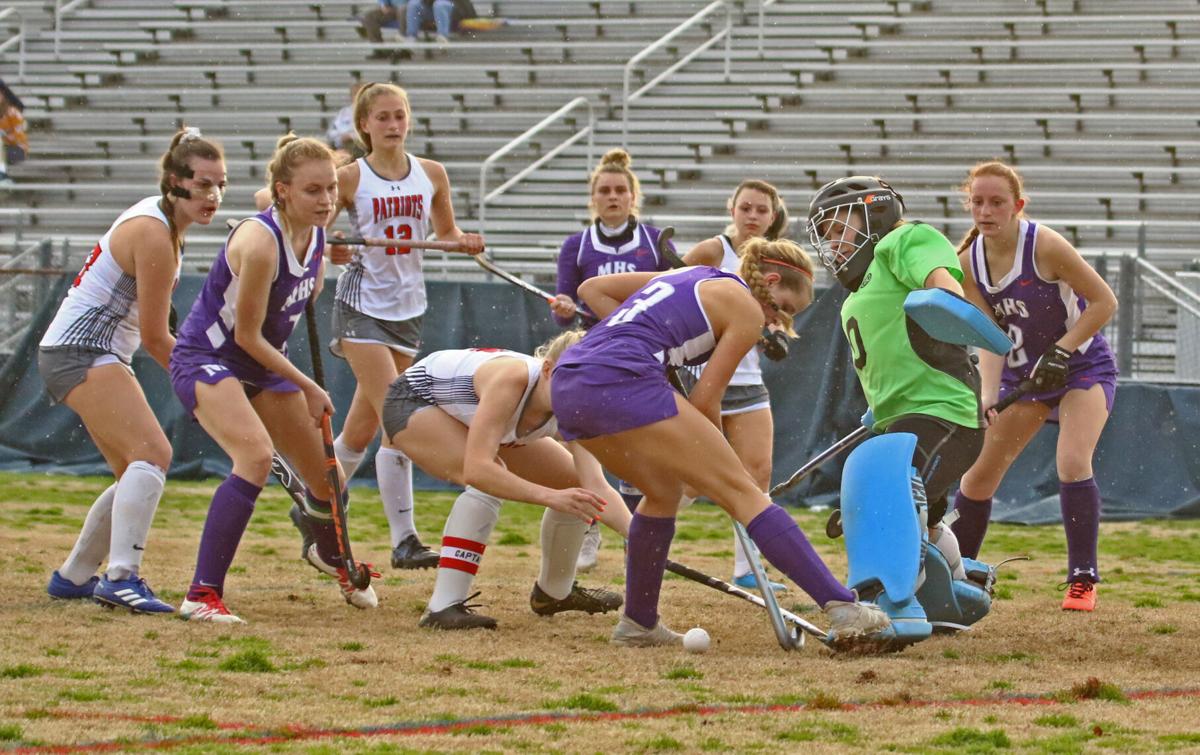 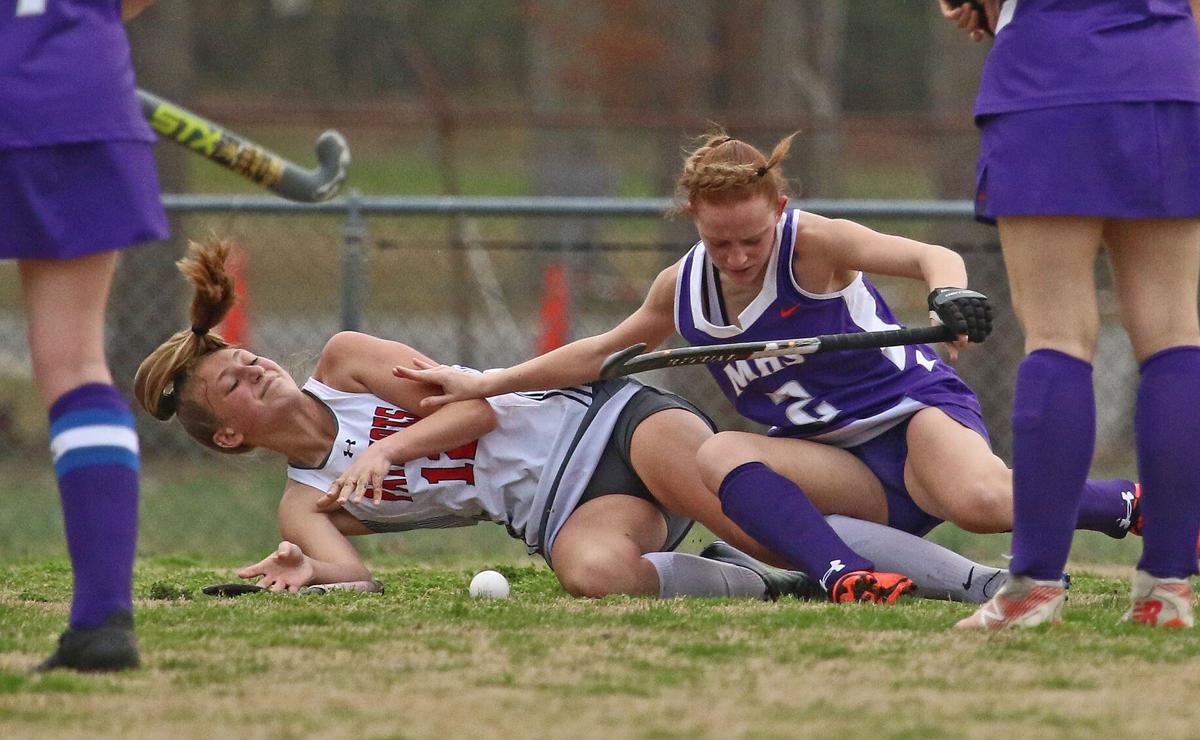 Patrick Henry's Maddie Just and Mechanicsville's Ansley Deal tumble in the Mustangs' 2-1 win over the host Patriots on Thursday, March 25, 2021. 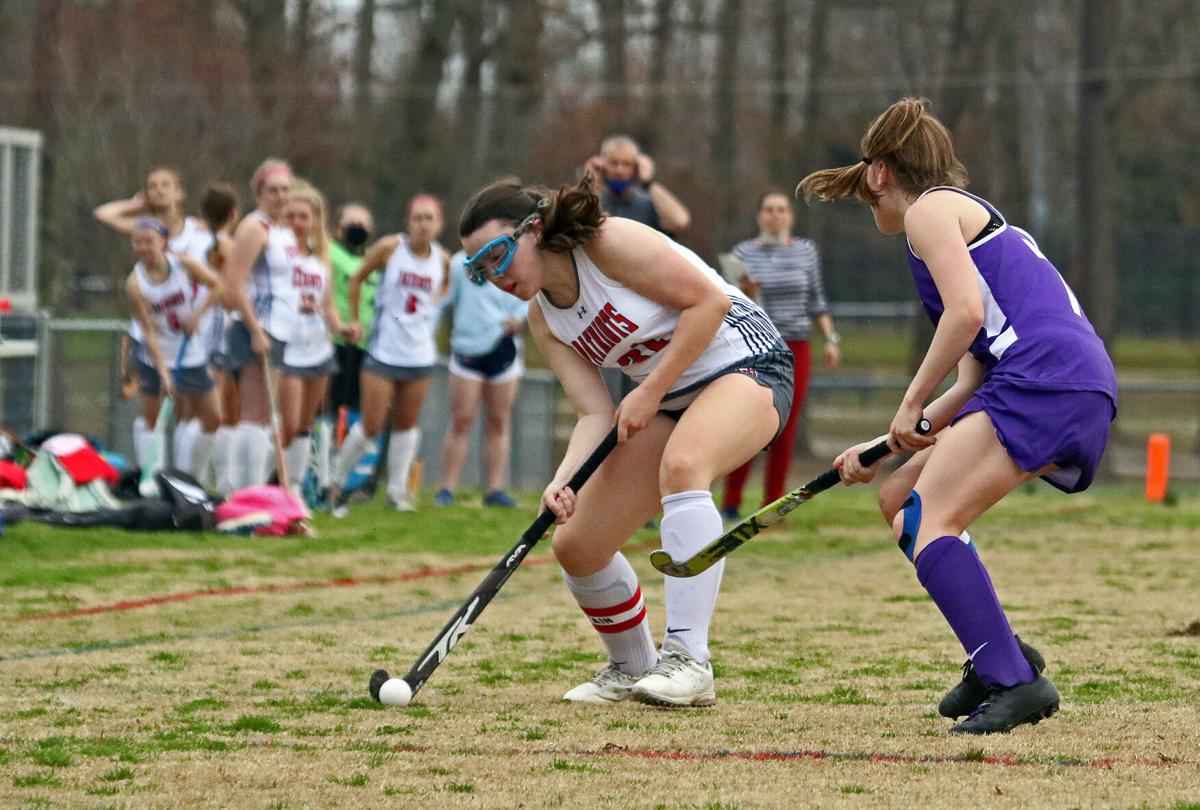 MECHANICSVILLE – It has most certainly been a strange season for the county’s high school field hockey teams. At times, though, it has been a bit grueling.

This past week was one of those grueling weeks, especially for Mechanicsville and Atlee, teams with shallower benches than usual coupled with busier schedules than normal. When the two teams met Friday at Mechanicsville, they were in their third game of the week. The girls played hard, but the fatigue was taking an effect.

The Raiders, however, mustered enough energy to earn a 5-0 win.

Both Atlee head coach Heather Hodges and Mechanicsville head coach Merridee Gibson said that a lack of depth – both teams are fielding fewer players than normal on their varsity rosters – contributes to weary legs at the end of a long week.

“Everybody’s getting a lot of playing time, which is good for their development,” Hodges said. “But it can be hard on their legs for sure, especially having games back-to-back like we had this week.”

The previous night, Atlee had thrashed Hanover 7-1. The Mustangs, however, eked out a tough 2-1 win at Patrick Henry. With one of their key players out with an injury, the back-to-back battles took a toll.

“It’s been so hard because we’re so short on numbers,” Gibson said. “We added only one sub recently and then we lost Carsyn [Poppa]. Carsyn broke her ankle at Atlee stepping in a hole. That’s a tough loss, losing your center-mid.

“It’s just been up and down. We’ve had our triumphs – we beat [Atlee] last week – and then we had a rough game tonight. We were exhausted.”

While the Raiders won 2-0, the game looked a more even contest for much of the time. Atlee took a 2-0 lead into intermission. But, as they added additional scores in the second half, the Raiders’ energy level improved. The Mustangs could not keep up.

While all “fall” sports have been experiencing something of a Twilight Zone season because of the timing and pandemic-era adjustments, it has had benefits.

“We have a great group of kids. We have great leadership from our seniors,” said Patrick Henry head coach Abbie Rossman. “They are just hard workers. They lead by example both in word and in deed I couldn’t ask for three more valuable leaders than those.

“Other than that, we're young. We start six players who made the transition from JV to varsity. So we're playing with several players who were much younger than our opponents and who are learning things and making gains day by day. We have just meshed very well on the field as well as off the field. I can't say enough about their composure, their patience, their willingness to try new things and to really work hard.”

Dave Lawrence can be reached a dlawrence@mechlocal.com.

Patrick Henry's Maddie Just and Mechanicsville's Ansley Deal tumble in the Mustangs' 2-1 win over the host Patriots on Thursday, March 25, 2021.