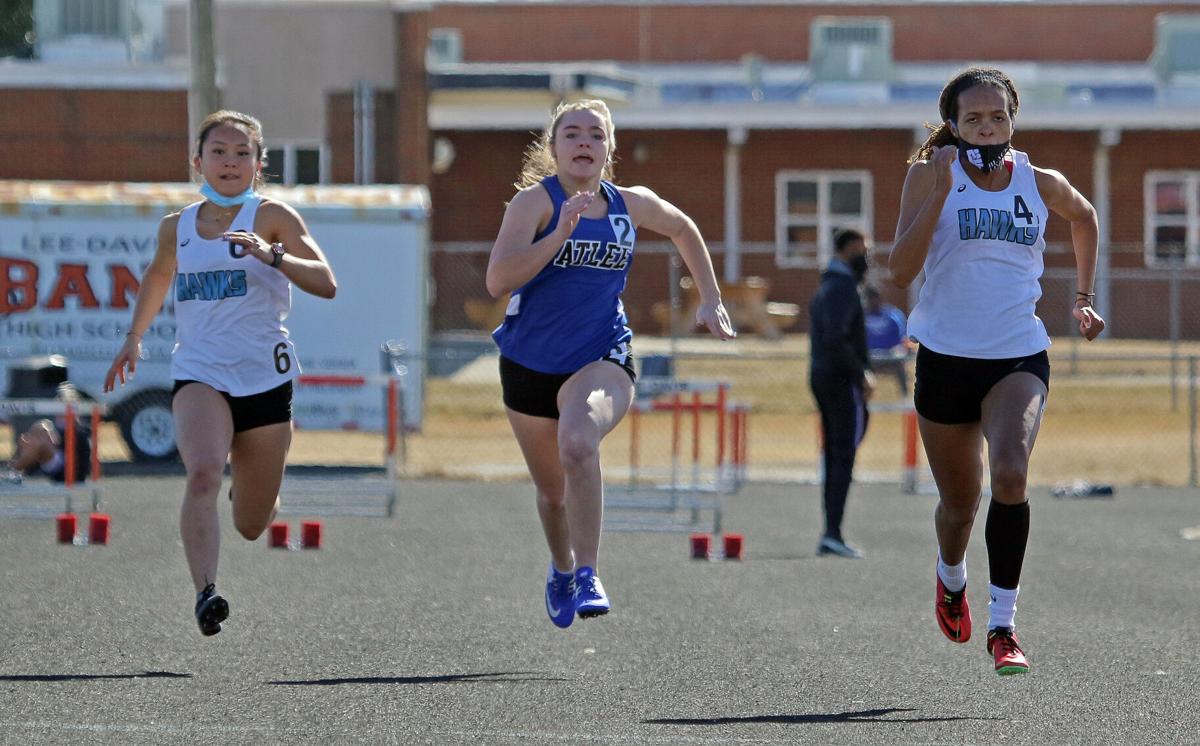 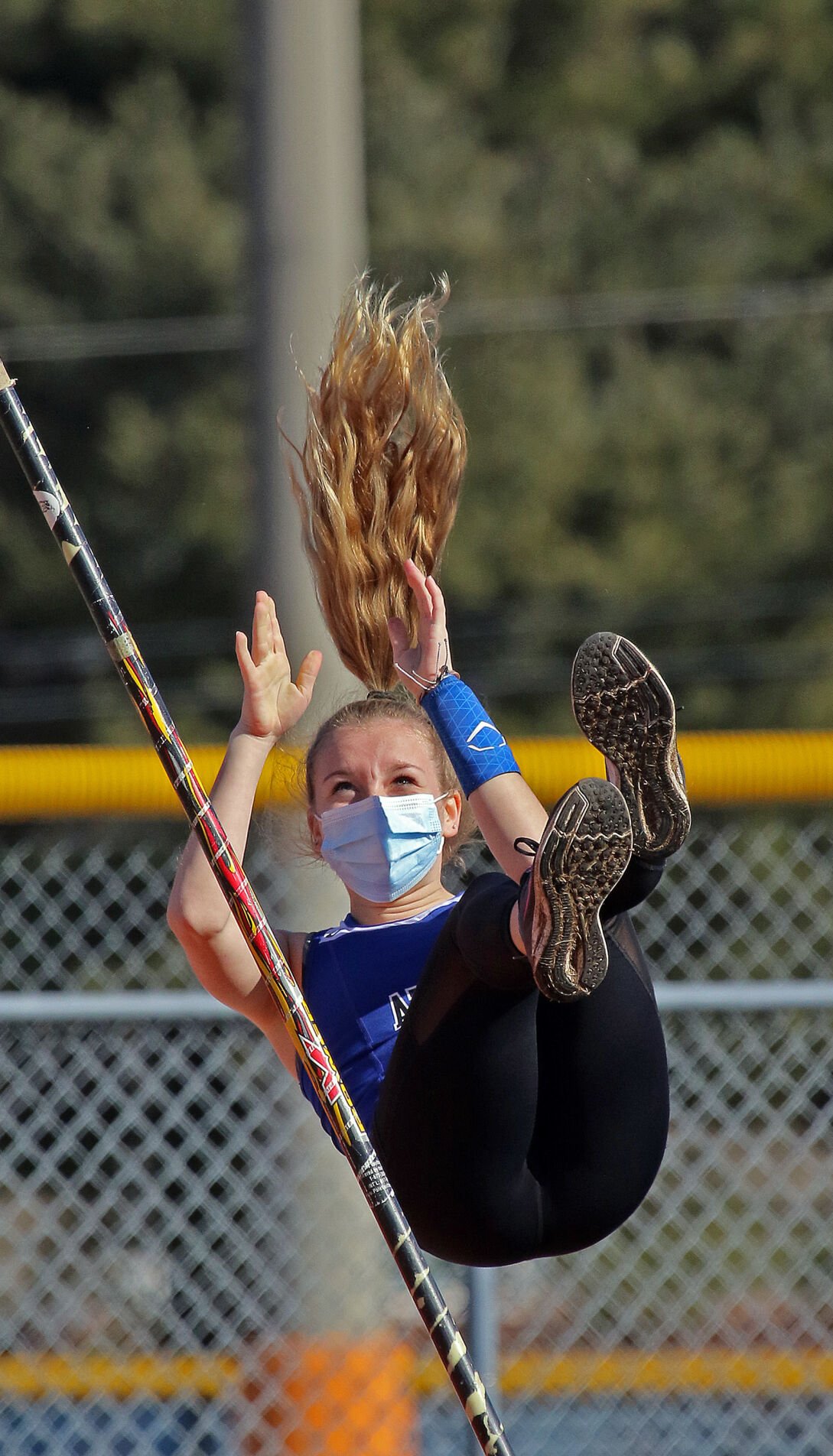 Atlee's Lora Chandler keeps her eyes on victory as she claims the girls pole vault title with vault of 9 feet, 6 inches in the Hanover County Quad at Mechanicsville High School on Saturday, Feb. 6, 2021. 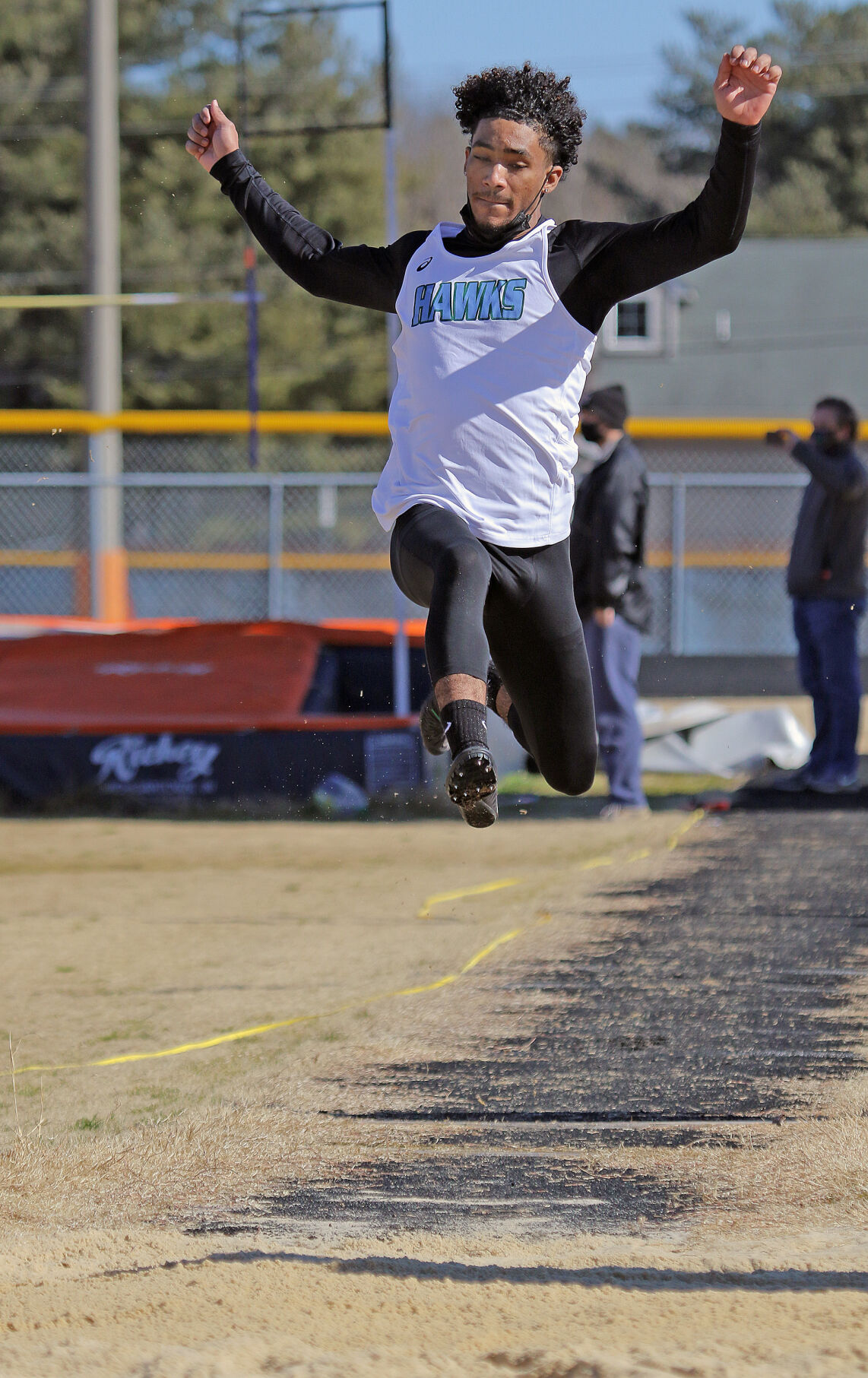 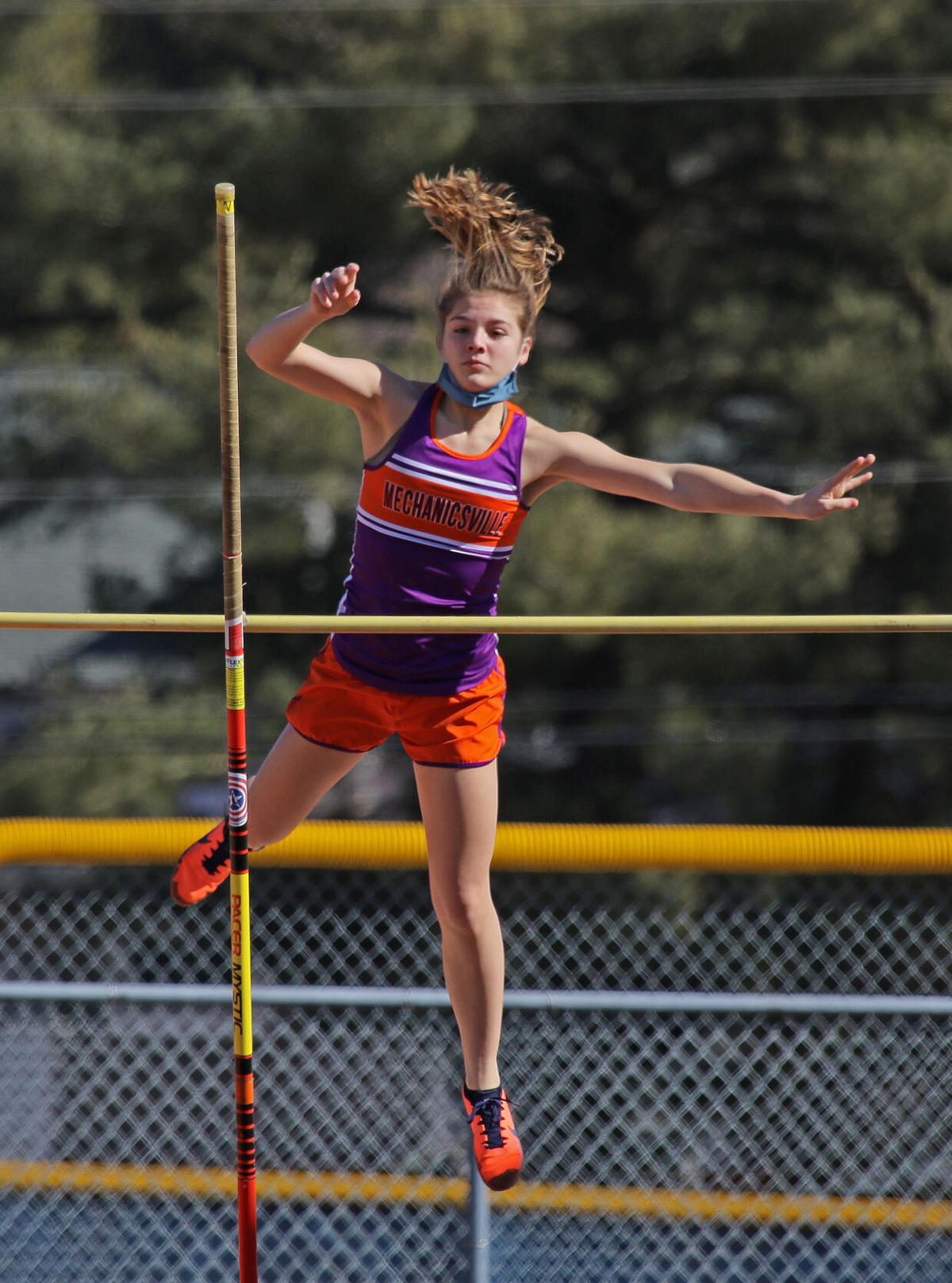 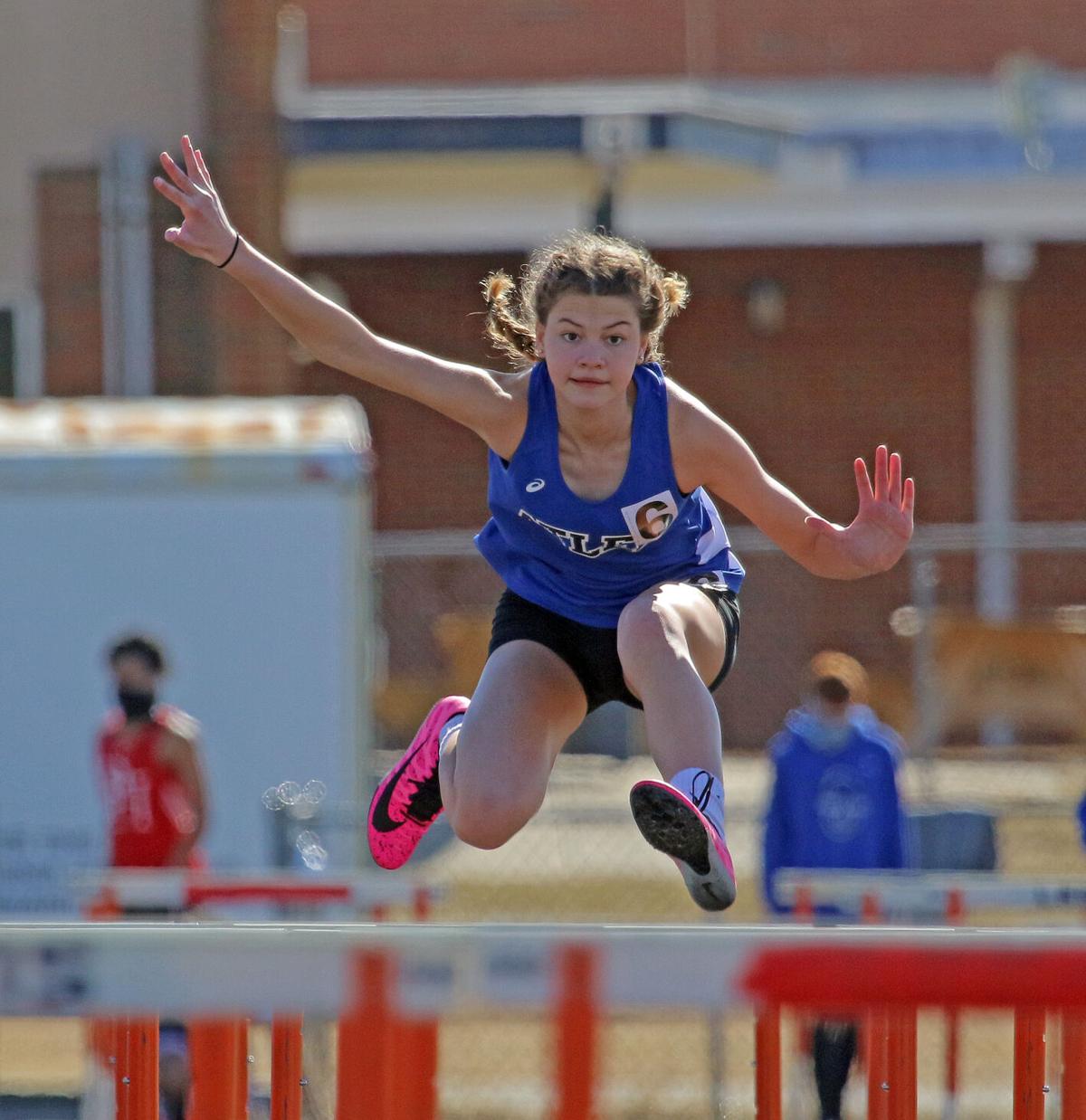 MECHANICSVILLE – The problem for schools with indoor track and field programs is that most of them have to hold their meets outdoors. That proved a problem when wintry weather on Jan. 30 forced Hanover’s four teams to postpone the county quad.

But the delay was just for a week. The weather cooperated, and on Saturday Hanover County’s four schools gathered at Mechanicsville High School to compete. While winning was certainly on the agenda, the focus was on prepping for the forthcoming Region 4B and Region 5B championships.

“It's really for us. We're just looking for a tune-up before regions, and we're still trying to figure out what we have in this trunk this season,” said Hanover head coach Rich Firth. “So it’s another chance to compete for the kids, to have a chance to get a little bit better. And that's all we're really looking for.”

In many ways, it is about all the coaches can look for given the highly compressed season.

“It's tough playing such a short, compressed season,” said Atlee head coach Neil Mathews. “We didn't have a lot of time to prepare. . . . We were kind of thinking we'd have the month of December to go. But then we were shut down for the month of December, which really, you know, put us behind the track and field. You’ve got to be consistent and do it on a daily basis, and all of a sudden we had to go from basically doing nothing to running meets.”

Hanover’s girls put on an especially strong performance, although the results of one of their best performers won’t count this year: Jaelynn Joiner – sister of former Hanover and current William & Mary star Makenzie Joiner – won the girls long jump and the 500-meter dash. But she’s an eighth grader.

“Believe it or not, she would be number one in the region in the 500 if she were eligible,” Firth said. “But she's not until next year.”

Other Hanover winners included Emma Sell in the long jump, Rachael Turner in the shot put, Ella Bakeman in the 55 hurdles, and Khia Holloway in both the 55 and 300 dashes. The Hawks ‘A’ team also won the 4x800 relay.

Atlee athletes won the other girls events: Kelsey Lee in the high jump, Lora Chandler in the pole vault, Rachel Mudd in the 1,000 run and the Raiders’ ‘A’ team in the 4x200 relay.

Atlee’s and Patrick Henry’s boys each had a trio of winners. For the Raiders, Greg Durgin won the pole vault, Caleb Warren the 55 dash, and Ian Sellors the 1,000 run. For the Patriots, Camden Byrd won the shot put, Manny Jackson the 55 hurdles and Trevor Mason the 3,200 run.

Hanover, Mechanicsville, and Patrick Henry athletes will compete in the Region 4B championships, currently slated for Saturday at Louisa County High School. Atlee will host the Region 5B meet Tuesday.

But the weather and the pandemic could scramble all those plans. It has been a most unusual season because of all the challenges and uncertainty. Nevertheless, the season, no matter how challenging, has been valuable.

“The kids, they’re just fine. They're fine with it. I think the coaches are the ones that are struggling a little more than the kids. We're learning a little bit about being happy with what you’ve got. At least you're getting to play right now and getting to run a little bit. And more important to me, we don't lose a year of development just sitting on the sideline. . . . We get to train and work hard and learn what's important for the development of the player or the runner. We're not losing that that year of development that we thought we potentially could lose.”

Firth is proud of how all the athletes have adapted.

“This is probably the one of the best group we've ever worked with as far as coachability, willingness to be flexible, working with us and, you know, dedication,” Firth said. “The kids have been great. I'm real, real proud of how they handle everything. Normally, we're traveling all over the state and sometimes out of state for meets this time of year. But they've been great, and they are meeting taking every challenge that's thrown at them.”

Atlee's Lora Chandler keeps her eyes on victory as she claims the girls pole vault title with vault of 9 feet, 6 inches in the Hanover County Quad at Mechanicsville High School on Saturday, Feb. 6, 2021.