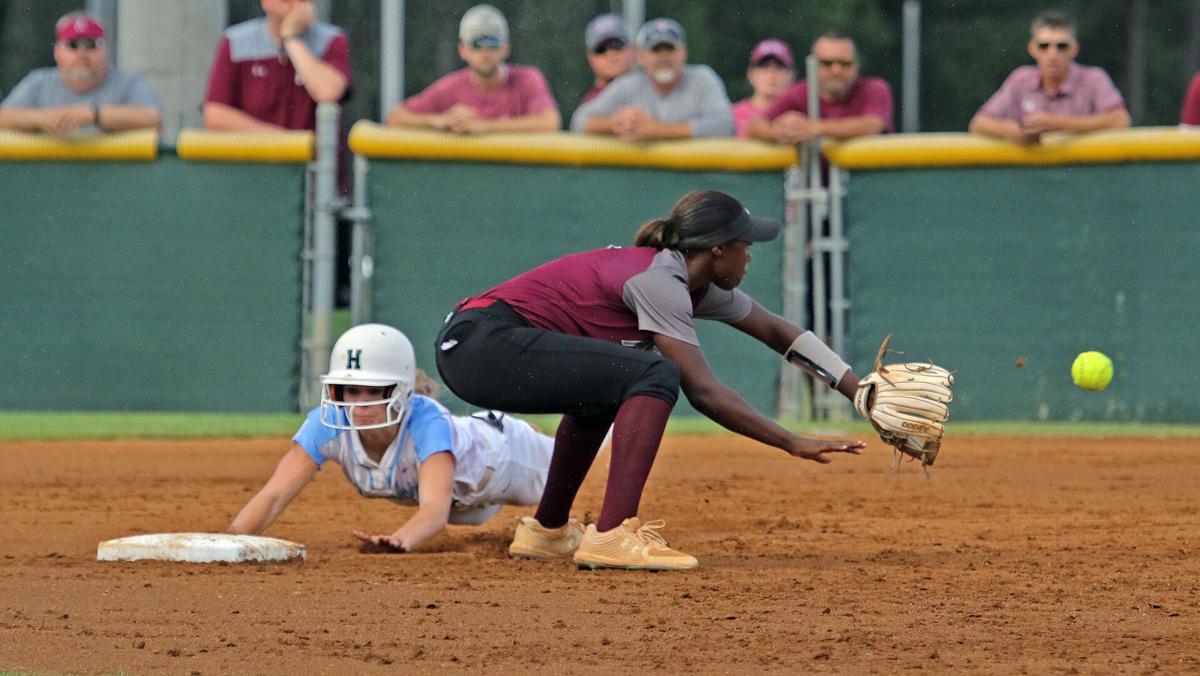 Hanover’s Alexis Currie steals second base as Amherst shortstop Tyah Charlton fields the throw in the Hawks’ 2-0 loss in the VHSL Class 4 title game at Hanover on Saturday, June 26, 2021. 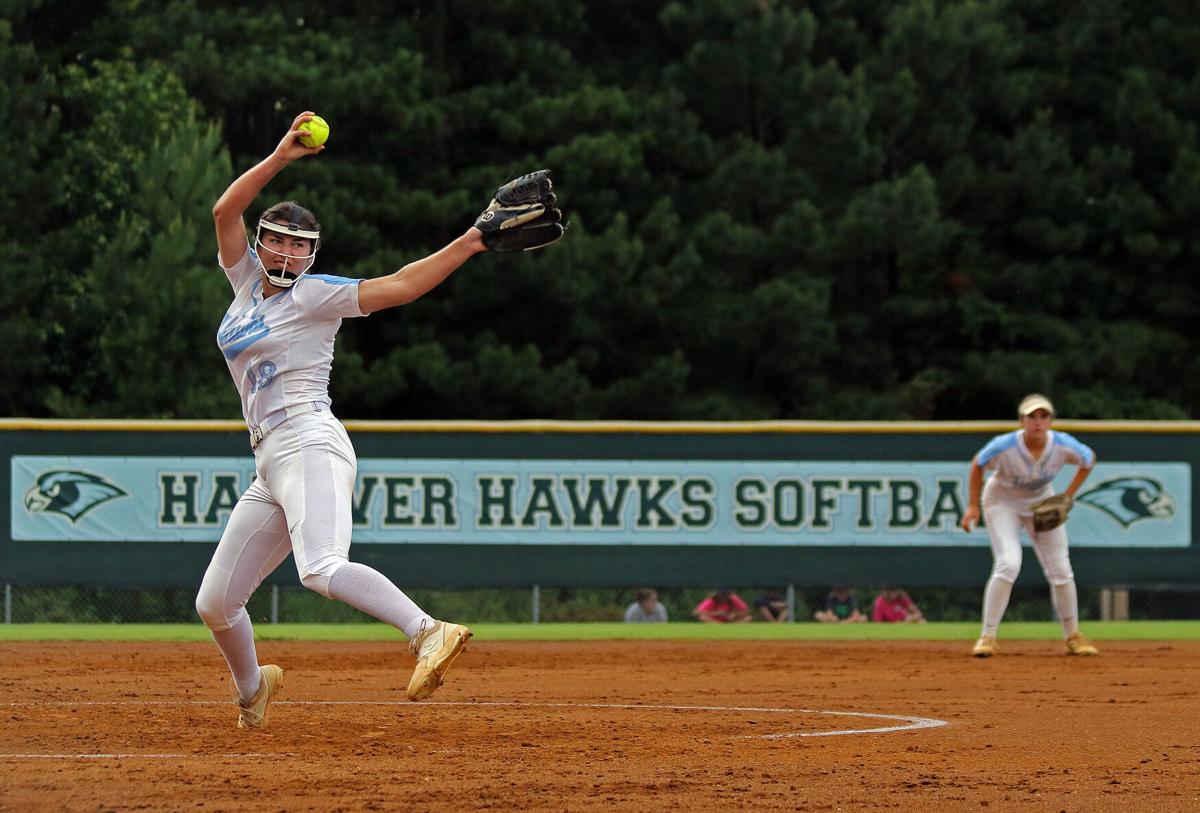 Hanover starting pitcher Julia Cuozzo would strike out the first nine Amherst County batters she faced in the Hawks’ 2-0 loss in the VHSL Class 4 title game at Hanover on Saturday, June 26, 2021. 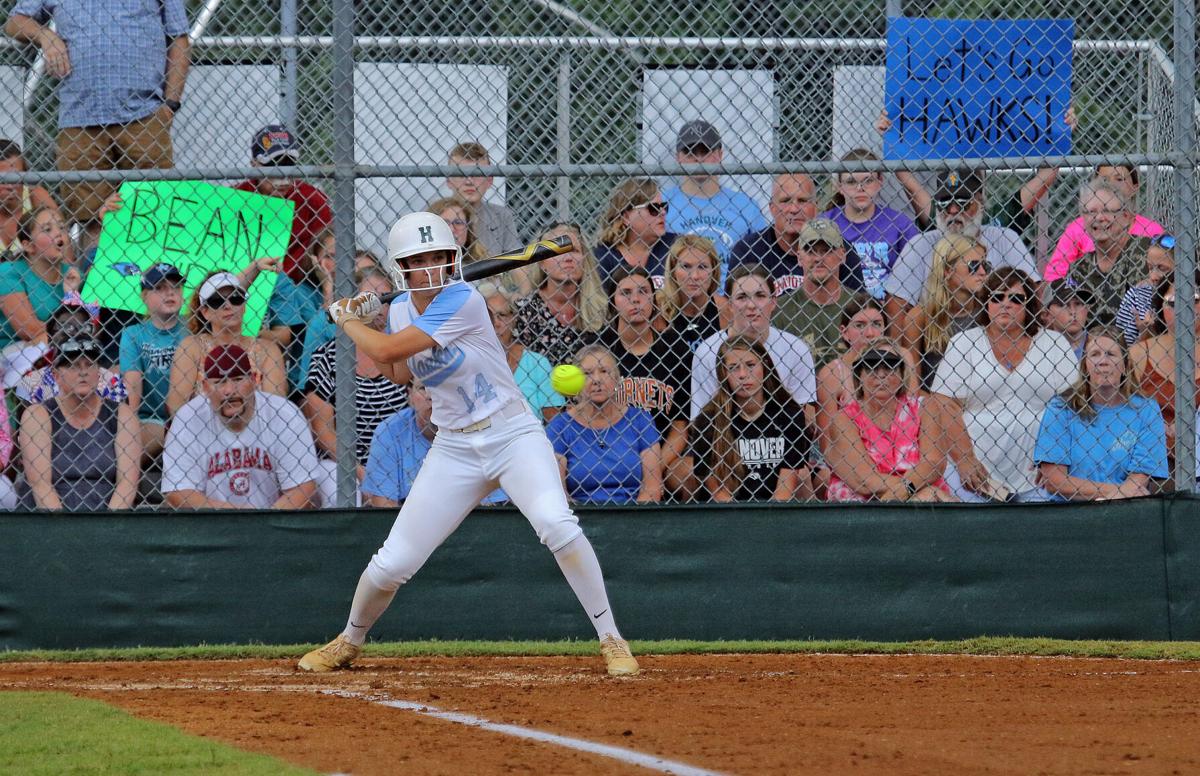 By Rob Witham For the Local

MECHANICSVILLE – All season long, during a 15-game winning streak that brought the Hanover Hawks softball team to its first Virginia High School League state title game in 14 years, it relied on the superior pitching of sophomore Julia Cuozzo, timely hitting, and tough defense.

Saturday night, hosting Amherst County, opportunities on the base paths passed Hanover by, and, in one extra inning, their defense fell apart, opening the door for the Lancers to win the Class 4 state title with a 2-0 victory.

“That’s very uncharacteristic of us,” said Hanover head coach Michael Rohr after his final meeting with the team after the game. “I wasn’t prepared for that speech. I had to make it up as I went.”

Hanover (15-1) seized momentum early, as Cuozzo struck out the first nine batters she faced, the final three of them after a 52-minute rain delay forced the tarp onto the field and a sea of volunteers helped to get it game-ready once again.

In the fourth, the Lancers got their first hit, a two-out double from K.K. Ramsey. Cuozzo calmly fanned the next batter, bringing the Hawks up for what turned out to be their best chance to score.

With one out, a pair of walks to Bella Pastore and Lilly Parrish brought up Reagan Hill, who popped out to catcher Maddie Jennings. Amherst starter Dylan McNerney, who struck out 10, issued a walk to Cuozzo to load the bases, but Jenna Currie popped out to shortstop to end the threat.

On the night, the Hawks stranded seven runners, and had an eighth thrown out to end the third inning while trying to advance to third base on a bunt.

Cuozzo and McNerney matched each other pitch for pitch, combining for 27 strikeouts. Cuozzo ended the night with 17, only allowing three hits, while McNerney surrendered just two: an Alyssa Broaddus single in the third, and a double from Beanie Acors to lead off the fifth.

Cuozzo’s final strikeout opened the eighth. Afterwards, it was the Hanover defense which failed them. Three errors, including a wide throw to first on what would have been the final out with runners still on base for Amherst, and a wild pitch, allowed two Lancers to score.

In the Hanover eighth, Pastore reached on catcher’s interference with two out, and Parris walked. But on the first pitch to Reagan Hill, McNerney induced a pop out to third baseman Sienna Fielder to end the Hawks’ dream of their first state championship since 2006.

Rohr said the mistakes down the stretch will not define the team. Hanover loses three starters to graduation in Pastore, shortstop Julia Mardigian and Broaddus, who drove in the winning run in the Region 4B title game against Orange County last week. Cuozzo will lead the rest of the Hawks into what is hoped to be a normal season in 2022.

The softball fan in Rohr briefly came out through the bitter disappointment, but so did his optimism.

“That was a fun game, man. Both teams had a couple of chances. I thought even offensively, we had times where we should have gotten a couple of runs, but we didn’t get it done, which is something we’ve been doing all year,” he said. “We’ll be back.”

There is no joy in Mechanicsville

Hanover’s Alexis Currie steals second base as Amherst shortstop Tyah Charlton fields the throw in the Hawks’ 2-0 loss in the VHSL Class 4 title game at Hanover on Saturday, June 26, 2021.

Hanover starting pitcher Julia Cuozzo would strike out the first nine Amherst County batters she faced in the Hawks’ 2-0 loss in the VHSL Class 4 title game at Hanover on Saturday, June 26, 2021.