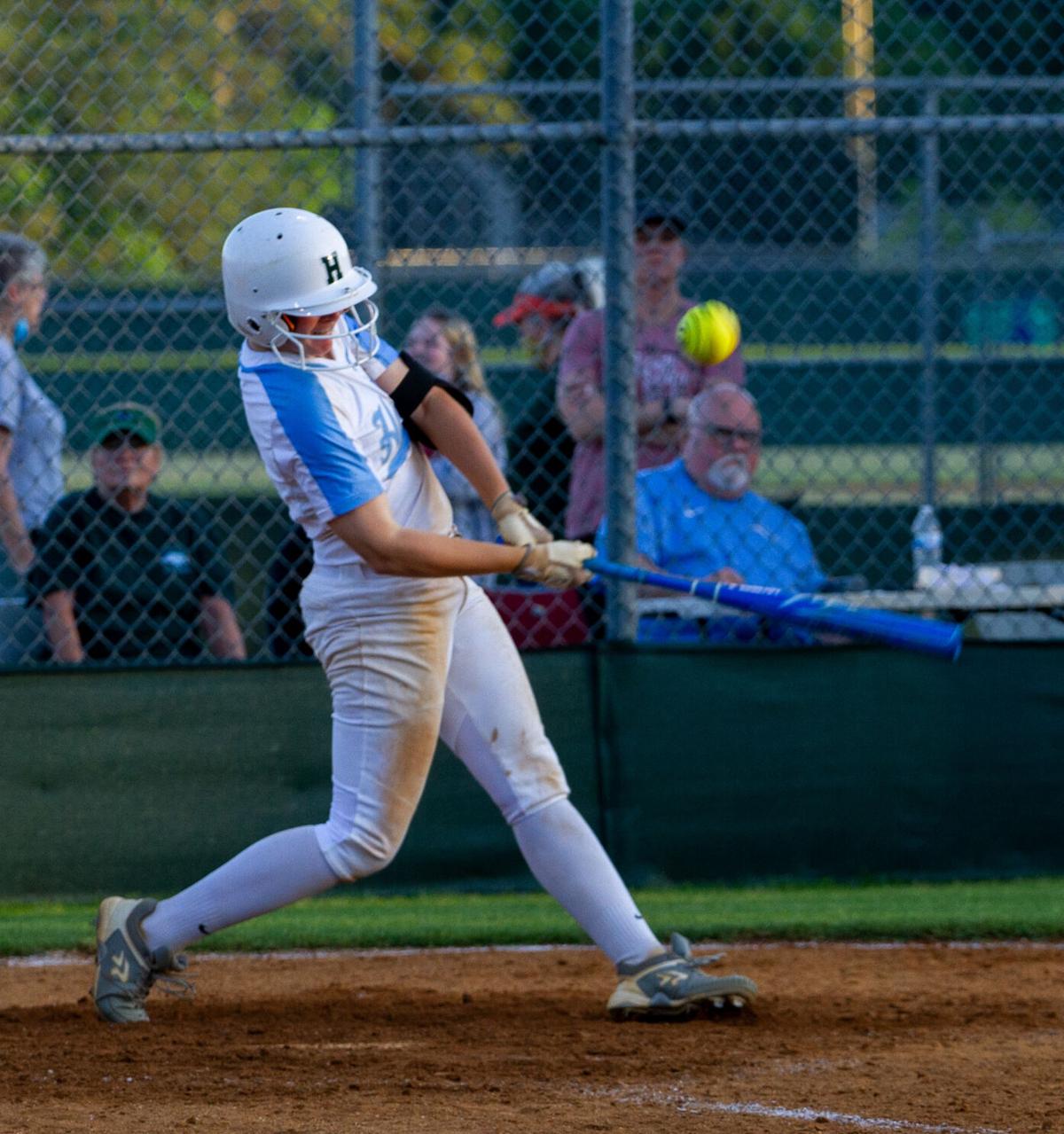 MECHANICSVILLE, Va. -- Hanover's Lilly Parrish bloops a single into right field that drove in two runs in the Hawks' 3-0 shutout of visiting Atlee on Friday, May 21, 2021. 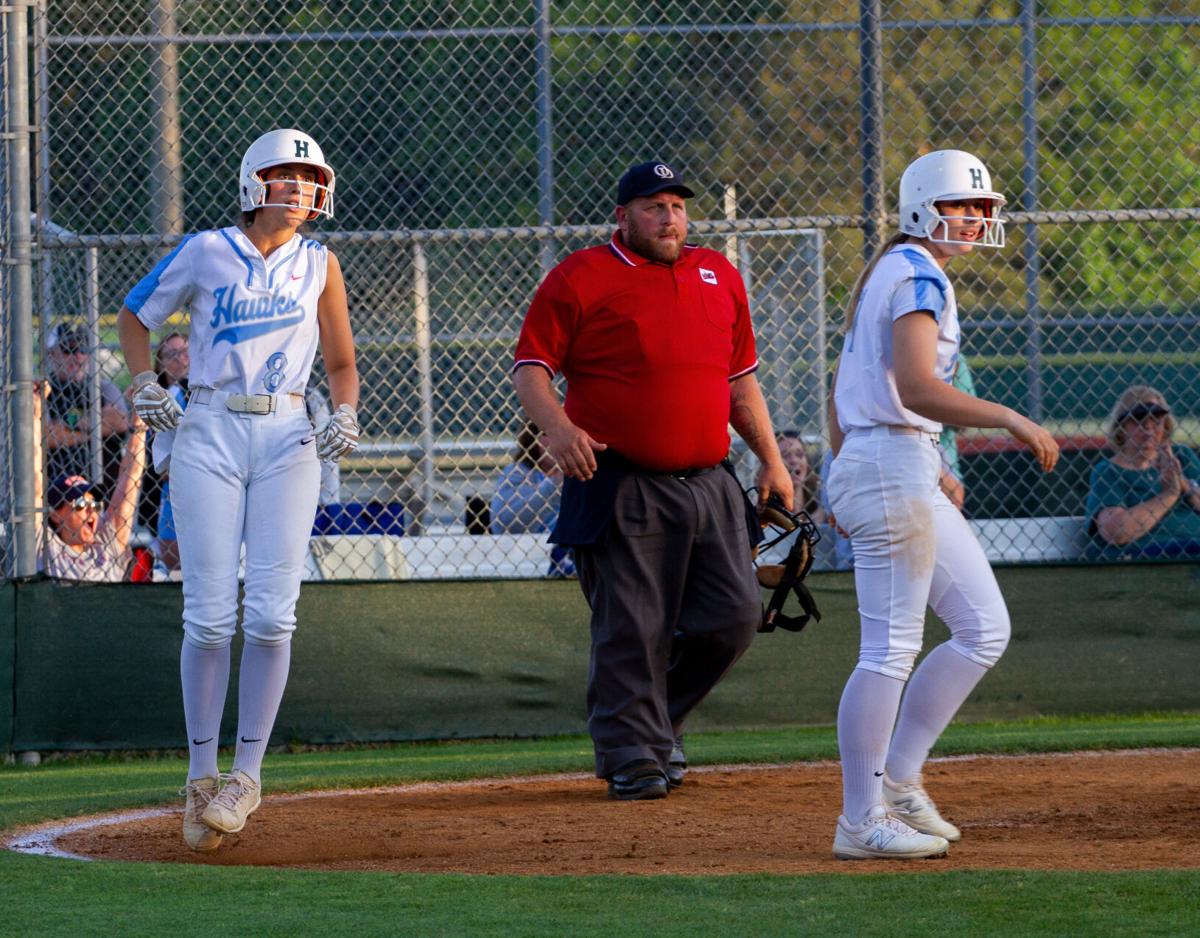 MECHANICSVILLE, Va. -- Hanover's Julia Mardigian (8) and Alyssa Broaddus check to see if teammate Lilly Parrish reached first safely after they scored on Parrish's single in the Hawks' 3-0 shutout of visiting Atlee on Friday, May 21, 2021. 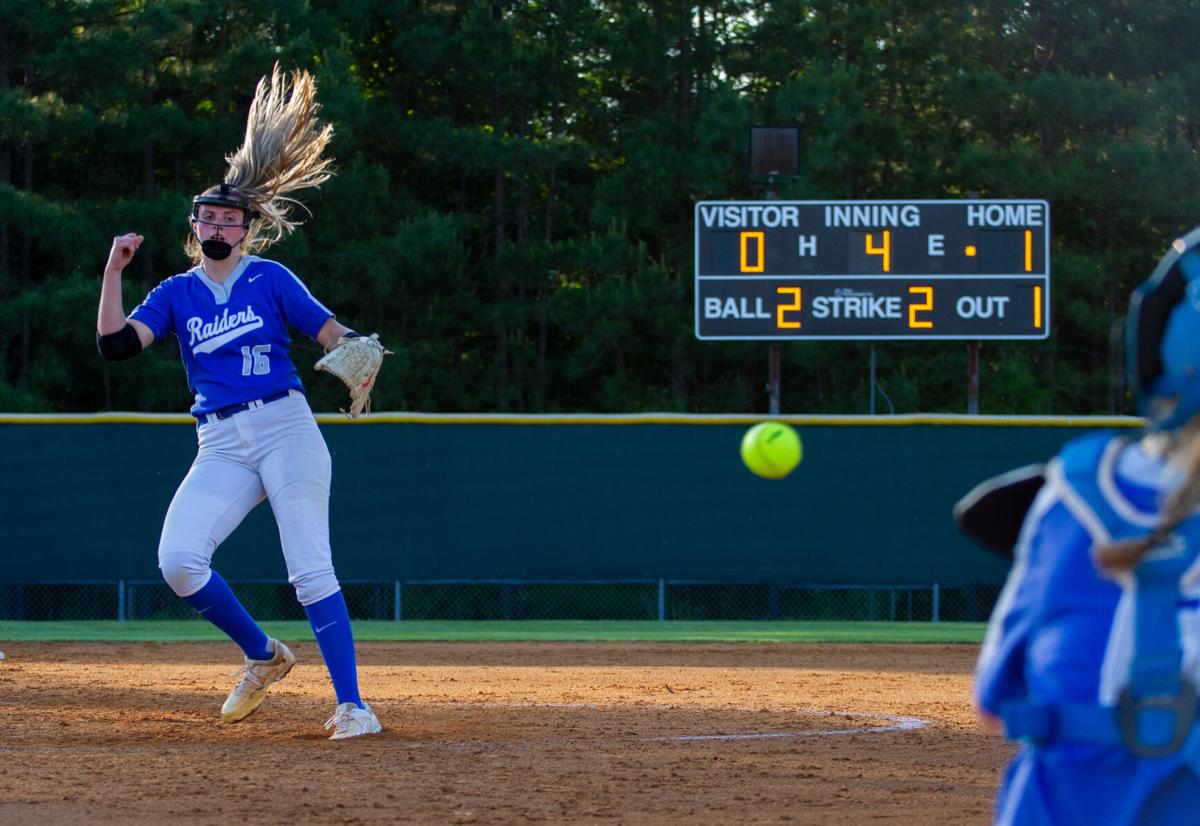 MECHANICSVILLE, Va. -- Atlee pitcher Kara Hammock throws a strike in Hanover's 3-0 shutout of the visiting Raiders on Friday, May 21, 2021.

MECHANICSVILLE – When the Atlee and Hanover softball teams meet, each team expects to be tested. Friday night at Hanover, each team found their expectations met.

Both pitchers, Atlee’s Kara Hammock and Hanover’s Julia Cuozzo, turned in solid performances. Hammock struck out four, Cuozzo nine. The defenses behind them made no errors. Each pitcher gave up one walk and five hits.

But Hanover made sure more of its hits did damage, beginning with Julia Mardigian’s solo home run in the fourth inning and ending with Lilly Parrish’s bloop single that drove in two runs in the sixth that paced the Hawks to a 3-0 victory.

“They’re a really good team, and Kara does a really good job on the mound. She’s tough,” said Atlee head coach Mike Rohr. “I didn’t think we did a really good job with our approach at the plate the first four innings. The second time around, I thought we did much better and we started getting something out of it. Our three games have been like that – each one of them.”

“I told the team at the end there that they executed our game plan exactly how we asked them to do it,” McIntyre said. “You have a very talented pitcher on [Hanover’s] side. You have a very good team on that side.”

Atlee’s leadoff batter, Kelly Ayer, wasted no time getting in the hit column with a single in the first at-bat of the game. But none of the batters following her could get her home. It was a scenario that seemed stuck on repeat for both teams.

“We were in a great game and a tight game,” McIntyre said. “We had several opportunities to score. We just didn’t quite get that timely hit to push a run in. If we had, it could have been a different game.”

Hanover’s Mardigian broke the stalemate by knocking herself in. With one out in the fourth inning, she got around on a Hammock pitch and drove it over the center field fence.

The pitch she hit was a good one.

“It was a good drop ball,” McIntyre said. “When Hammock came out, she looked right at it and said, ‘Man, I threw a great drop.’ Mardigian just hit it. . . . She just reached down there and got one. It was a great pitch. It was a great spot for the pitch. It was everything that we wanted out of it. Great hitters hit pitcher’s pitches sometime.”

Hammock didn’t let the dinger rattle her, setting down the Hanover side in fifth inning. But Hanover’s No. 9 batter, Alyssa Broaddus, opened the Hawk sixth with a single and was sacrificed to second by Alexis Currie, and advanced to third on a wild pitch. Mardigian walked and advanced to second on defensive indifference.

One out later, Parrish blooped a singled down the right foul line between Atlee’s first baseman and right fielder. Broaddus and Mardigian scored to make it 3-0.

MECHANICSVILLE, Va. -- Hanover's Lilly Parrish bloops a single into right field that drove in two runs in the Hawks' 3-0 shutout of visiting Atlee on Friday, May 21, 2021.

MECHANICSVILLE, Va. -- Hanover's Julia Mardigian (8) and Alyssa Broaddus check to see if teammate Lilly Parrish reached first safely after they scored on Parrish's single in the Hawks' 3-0 shutout of visiting Atlee on Friday, May 21, 2021.

MECHANICSVILLE, Va. -- Atlee pitcher Kara Hammock throws a strike in Hanover's 3-0 shutout of the visiting Raiders on Friday, May 21, 2021.