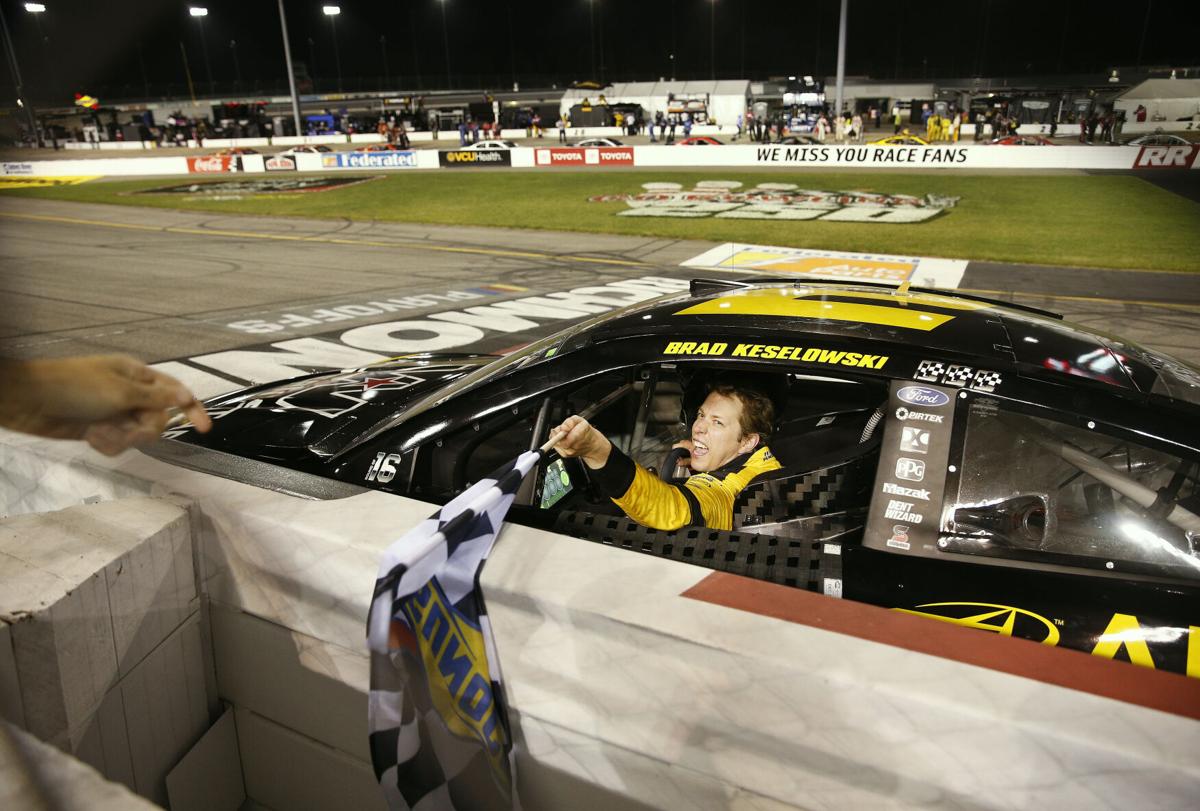 Brad Keselowski collects the checkered flag at the finish line at Richmond Raceway after winning the 63rd Annual Federated Auto Parts 400 Saturday night. Keselowski predicted earlier last week that he would do big things in Richmond — and he delivered.

He did not have to search for recipes for crow for his post-race meal.

Keselowski, in his No. 2 Western Star/Alliance Parts Ford, led for 192 laps – nearly four times as many as Austin Dillon, who was next on the number of laps lead list with 55 – and, more important, slipped past Dillon on Lap 352 for the final lead change of the night to claim his 34th career Cup Series win, fourth win of the season and 20th top-10 finish this season.

Keselowski said it was not easy to back up his words with results.

“These are some of the best drivers in the world and they're not easy to beat,” Keselowski said. “I knew we were going to have a great car. I knew I had put a lot of work into what I needed to do as a driver to be really good here and to find a really strong rhythm, and if I could pair those things with an execution race, a race with great execution, I felt like we could win it – and we put all those three together, and here we are. That feels really incredible. It's hard to find the right word for it, to be honest, but I'm going to enjoy it for sure.”

One might think Keselowski would have been so thrilled by the win to celebrate with a good burnout, but no. Keselowski was thinking long-term. He used the car twice this season – once at New Hampshire – and won both times.

“I want this car for Phoenix. It's 2-for-2,” Keselowski said. “I'm really pumped about this performance and the way we've run on short tracks. Man, this thing was awesome!”

Keselowski said he was feeling good about the playoffs as the regular season came to an end.

“I just feel like things are coming together. I know that's probably hard to make much out of, but it takes so many little pieces to come together to win and to be great,” he said. “Good – I've run really good here on the Cup level for probably the last eight to 10 years, but I've had a couple seasons that were great, and the difference between good to great is just all the tiny little things and the details, and I feel like a lot of those details are going our way.”

But Keselowski knows he has more work to do to get to the season finale Phoenix. Still, the win Saturday night in Richmond earned him a ticket to the second round of the NASCAR playoffs.

Local favorite Denny Hamlin started out strong, leading for 45 laps early in the race. But a pit road-speeding penalty on Lap 84 sent him to the back of the pack, and he never quite recovered, finishing in a frustrating 12th place.

Dillon was also dinged for speeding in pit road at that time.

“I wish I wouldn’t have had the speeding penalty, but we overcame that,” Dillon said. “I should have been a little bit more patient getting to pit road there. . . . Either way, what a great night for our team.”

The Cup Series playoff field gets narrowed down to 12 Saturday at the Bass Pro Shops Night Race at Bristol Motor Speedway. The race starts at 7:30 p.m. and will be broadcast on NBCSN and streamed on the NBC Sports App.

The Mechanicsville Local Letters to the Editor: Week of 10/21/20

Wittman: broadband relief could be headed to Hanover

HANOVER – In what might turn out to be an historic turnout in voting Tuesday, Hanover County was seeing plenty of activity at the Director of …

EDA to help restaurants and breweries with outdoor heating

ASHLAND – In an attempt to boost restaurants and breweries impacted by COVID-19, the Ashland Economic Development Authority agreed last Thursd…

The Downtown Ashland Association is yelling “All aboard!” as the organization solicits donations to match a grant to establish a Railroad Park…

The Mechanicsville Local Letters to the Editor: Week of Oct. 28, 2020

Brad Keselowski collects the checkered flag at the finish line at Richmond Raceway after winning the 63rd Annual Federated Auto Parts 400 Saturday night. Keselowski predicted earlier last week that he would do big things in Richmond — and he delivered.