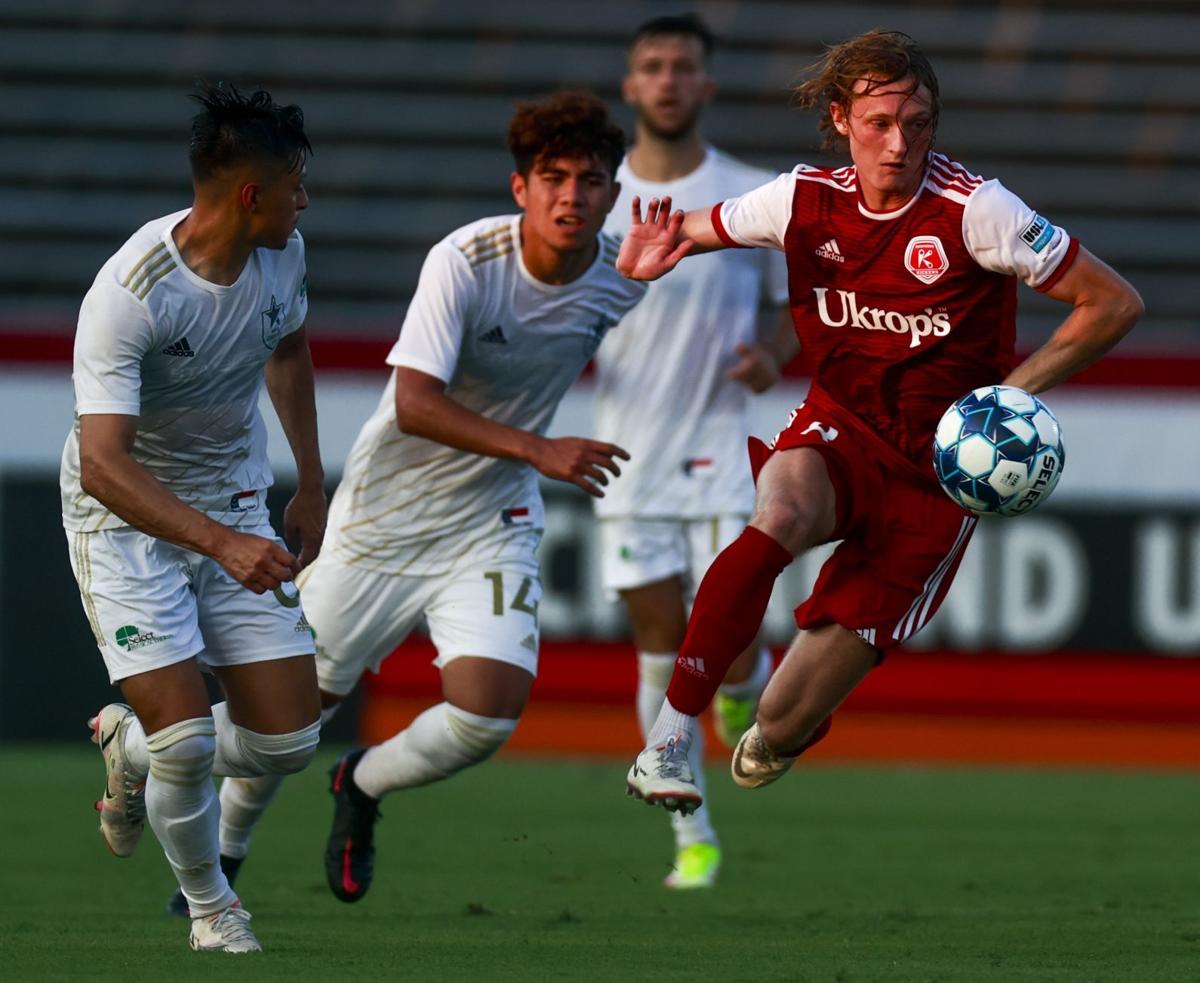 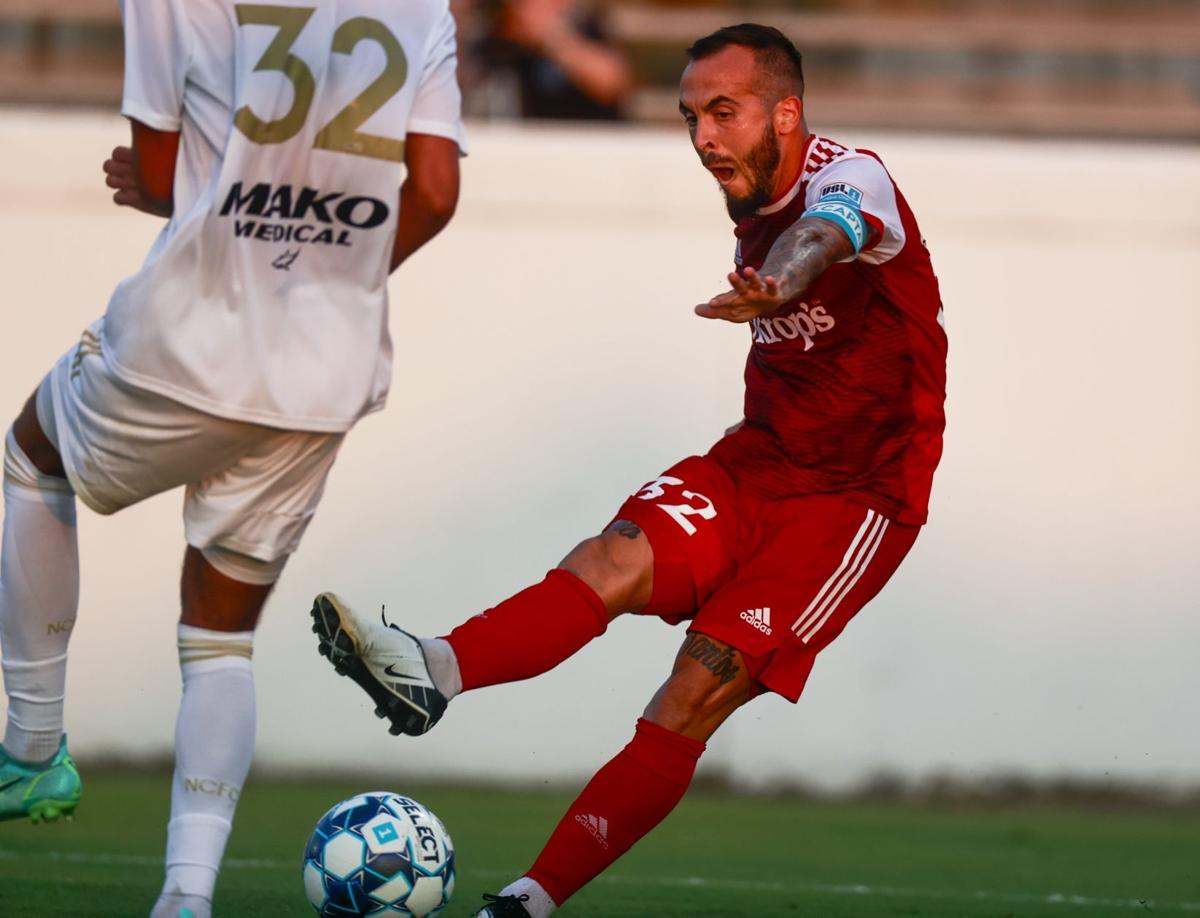 Kickers forward Emiliano Terzaghi takes a shot during a USL League One match against North Carolina FC at City Stadium on Aug. 28.

The Richmond Kickers were hoping for a win against North Carolina FC at City Stadium Saturday night. Unfortunately, they had to settle for two ties, a 0-0 score, and a tie for the league lead in clean sheets with seven.

North Carolina dominated the night in possession time, with control of the ball 62% of the time compared with 38% for Richmond. Such an imbalance in possessions has been a fairly common theme running through the Kickers’ matches this season.

“I haven’t looked at it yet, but if that’s the statistic, we probably didn’t do as well as we should have,” said Richmond head coach and chief athletic officer Darren Sawatzky. “I think there are sequences and periods of time we do very well on the ball, and there are periods of time that, when we gain possession, we give it back to easily.

“The interesting thing is that we’ve been consistently inconsistent in our possession percentage. There are times we do a really great job and times when we give the ball back. When we defend too much, we don’t have the legs at the end of the game to chase that goal.”

Despite those challenges, Sawatzky said possession isn’t the primary factor in winning.

“I believe in the next few games that we’ll improve on that, but possession never won anything,” Sawatsky said. “Goals win everything. I’ll give up possession for goals. We just didn’t do it well enough tonight.”

Despite the lack of goals, the Kickers played one of their best defensive games of the year. North Carolina had a number of near breakthroughs, but the Richmond defense repeatedly condensed around the goal to prevent the visitors from scoring.

Probably the most critical defensive play came in stoppage time when Richmond keeper Akira Fitzgerald dove to his left to punch North Carolina striker Robert Kristo’s header away from the goal, and a defender was nearby to block an open shot on the rebound. The North Carolina shot went into the side of the net instead.

“Going into the match I wanted to be pretty aggressive in terms of being aware of Kristo, being aware of where he was, and then coming off my line as much as possible to help our center-backs,” Fitzgerald said. “There might have been opportunities there to come out and possibly win the ball, but we had bodies around him.

“So for me it was just a matter of dropping back on my line quickly, getting set, balanced, so that – knowing his header wasn’t going to have a ton of pace on it because he was obviously just kind of flicking it – just being able to have my feet ready, I was able to leap forward and get a good push on it.”

The Kickers were supposed to host FC Madison Wednesday at City Stadium, but concerns over storms related to the remnants of Hurricane Ida forced the postponement of the match until Oct. 6.

In recent months, Hanover School Board meetings have been dominated by a set of issues that focused on mandatory mask policies and the treatme…

BRANDON, Mary Lois, 96, of Mechanicsville, passed away peacefully on November 23, 2021. She was preceded in death by her parents, Thomas and B…

The Mechsnicsville Local Letters to the Editor: Week of 12/1/2021

The Mechanicsville Local Obituaries - week of 11/10/21

CHANDLER, Milton Dalton, 93, of Henrico, went to be with the Lord on October 30, 2021, after a period of declining health. He was born in Wyll…

A Patrick Henry High School Memorial Brick Ceremony has been rescheduled to 4:15 p.m. on Dec. 3. Unforeseen issues resulted in the bricks not …

Kickers forward Emiliano Terzaghi takes a shot during a USL League One match against North Carolina FC at City Stadium on Aug. 28.