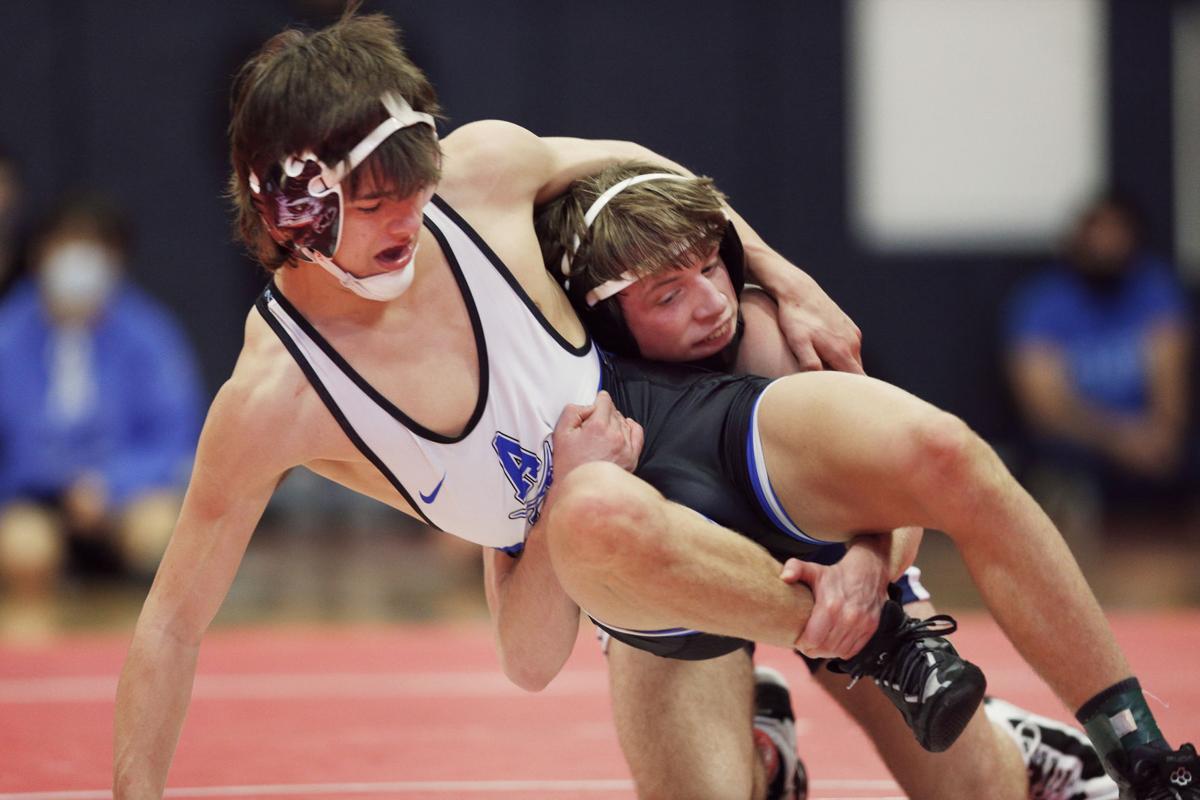 Jackson Foldes of Midlothian, shown competing against Atlee’s Tyler Bosher (left) in a second-round match of the Class 5, Region B wrestling tournament at Matoaca High School on Saturday, went on to register the decisive team points for the Trojans’ title with a pin of Matoaca’s Brian Emerson in the 132-pound class. 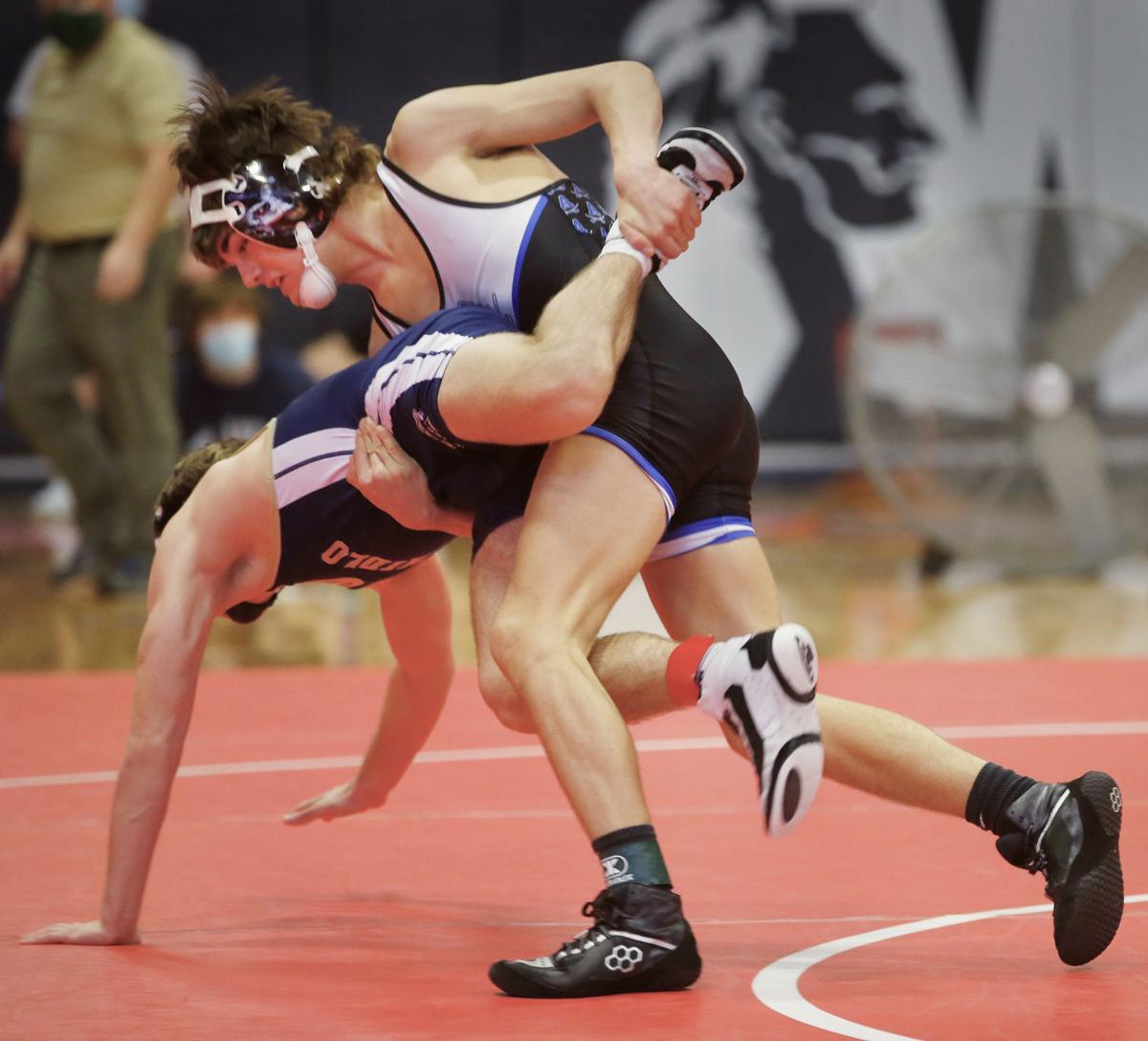 Second round of the Class 5, Region B wrestling tournament at Matoaca High School, Saturday 2/6/2021. Tyler Bosher of Atlee, right, completes against Jackson Foldes of Midlothian. 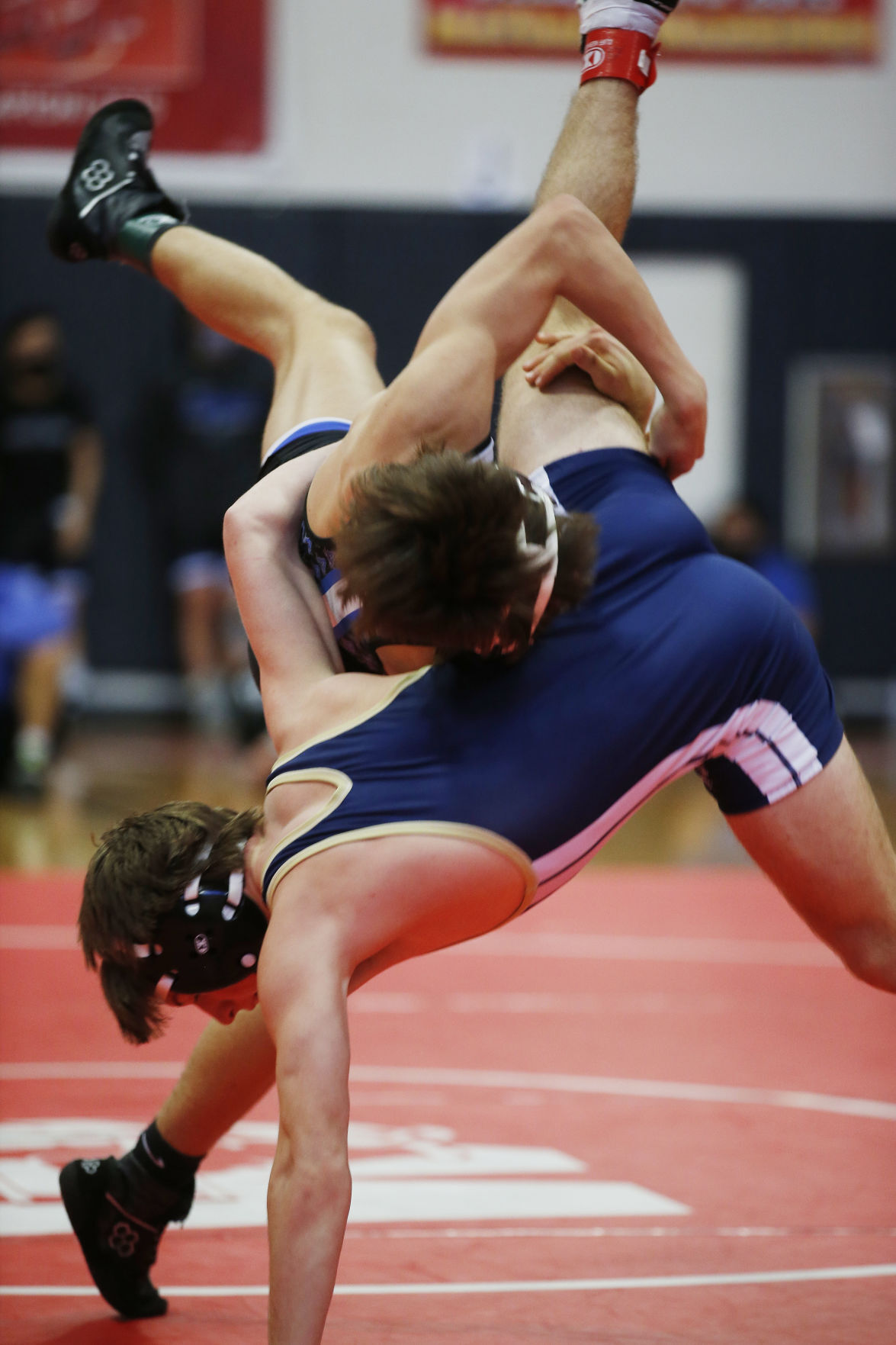 Second round of the Class 5, Region B wrestling tournament at Matoaca High School, Saturday 2/6/2021. Tyler Bosher of Atlee, top, completes against Jackson Foldes of Midlothian.

CHESTERFIELD – Midlothian wrestling won its first team regional championship since 1987 on Saturday at the Class 5, Region B meet at Matoaca.

Trojans coach Christopher Burks said the way the meet was playing out, they knew the team title would come down to the last few matches. Prince George finished second with 218 points to Midlothian’s 220. Atlee placed third with 170 points.

“It literally came down to our next-to-last match,” Burks said, speaking of the second-place match at 132 pounds. The Trojans’ Jackson Foldes pinned Matoaca’s Brian Emerson in 1:34 to give Midlothian the decisive team points.

“It took us a few minutes to put the math together to figure out that we were going to win. We knew when he [Foldes] won that, that was big, but we weren’t quite sure until a couple matches later.”

Burks has been the head coach at Midlothian for three years, and said he’s not sure what classification that 1987 regional title was in. An old banner in the gym says that’s the last time it happened, so Saturday’s title would appear somewhat historic. Burks did say this is “absolutely” the program’s most significant accomplishment in his memory.

“We keep taking strides forward, it’s very good team-wise,” Burks said, adding that the big accomplishment last year was finishing in the top 10 at the state meet. “This year, we get the regional championship, and hopefully, we finish even better at states [Feb. 18]. And keep building on that, keep growing.”

Burks said Painter’s victory at 152 pounds stood out to him. It took Painter triple overtime to overcome Atlee’s Will Rittenhouse in the title match. Painter got a key escape in the third overtime and won 5-4. “It was quite an intense match, two good guys wrestling, went into the overtime, which made it a lot of fun,” Burks said.

Harris beat Prince George’s Alex Noblin in the 138-pound title match by a 10-0 major decision. The win was a moment of redemption for Harris, who failed a concussion test last year while he was winning his regional finals match and had to drop out.

“The title match was a big thing for me this year, considering that I had a really unfortunate ending last year,” Harris said.

“I just went out there looking for team points. It was big for myself, but it was more of a team thing for me. We won it last year, and I wanted to make sure we’re still doing well this year.”

Frowert is Harris’ workout partner, and the two trained hard together during the past year alongside VMI wrestling’s Robbie Adelstein. Throughout the offseason, they put in extra work, pushing each other toward the goals of regional and state titles. Harris finished third in the state, and Frowert fourth last season. Those two are also close with Haynie, who finished third last year. Harris said the three have their sites set on state titles this time.

“We all came up just a bit short last year, so for all three of us to win a regional title was big,” Harris said. “But we’re looking for bigger here in the next couple weeks.”

Harris added he can’t say enough about the impact young Raiders coach Gabe LaVey — the 2010 All-Metro wrestler of the year while at Hanover — has had on Atlee wrestling.

“He’s really transformed this program, from almost nothing to a lot of great, great wrestlers coming out of the area,” Harris said. “The team is going to do well this year at states, and work isn’t stopping now.”

Burks said the meet’s environment was strange compared to years past — there were only seven teams competing, and no fans in attendance.

“But it was good, it was fun, you’ll take a championship any way you can get it,” Burks said with a laugh.

SPOTSYLVANIA – Champion Powhatan and runner-up Eastern View may have dominated the Region 4B wrestling championships at Spotsylvania High School Saturday but Hanover County’s three teams made their presence felt in the team scores and one wrestler brought home a region title.

Hanover’s Aden Halsey was the county’s only Region 4B champion, winning the 220-pound title by pinning Eastern View’s Lance Deane in 4:10. Three of Halsey’s teammates – Luke Hart with a second-place finish in the 152-pound class, Jacob Epperly with a fourth in the 195-pound class and Simon Siler with a sixth in the 285-pound class – also scored to lead the Hawks to an eighth-place finish.

Despite not having any champions, Mechanicsville High School finished better than Hanover in the team standings with scoring performances in 11 of the 12 weight classes in which the Mustangs competed. They were led by two third-place finishes: Jacob Koenig in the 120-pound class and Wyatt Mesco in 160 pounds.

Zach Joachim can be reached at zjoachim@timesdispatch.com.

Mechanicsville Local sports editor Dave Lawrence contributed to this report. He can be reached at dlawrence@mechlocal.com.

Jackson Foldes of Midlothian, shown competing against Atlee’s Tyler Bosher (left) in a second-round match of the Class 5, Region B wrestling tournament at Matoaca High School on Saturday, went on to register the decisive team points for the Trojans’ title with a pin of Matoaca’s Brian Emerson in the 132-pound class.

Second round of the Class 5, Region B wrestling tournament at Matoaca High School, Saturday 2/6/2021. Tyler Bosher of Atlee, right, completes against Jackson Foldes of Midlothian.

Second round of the Class 5, Region B wrestling tournament at Matoaca High School, Saturday 2/6/2021. Tyler Bosher of Atlee, top, completes against Jackson Foldes of Midlothian.