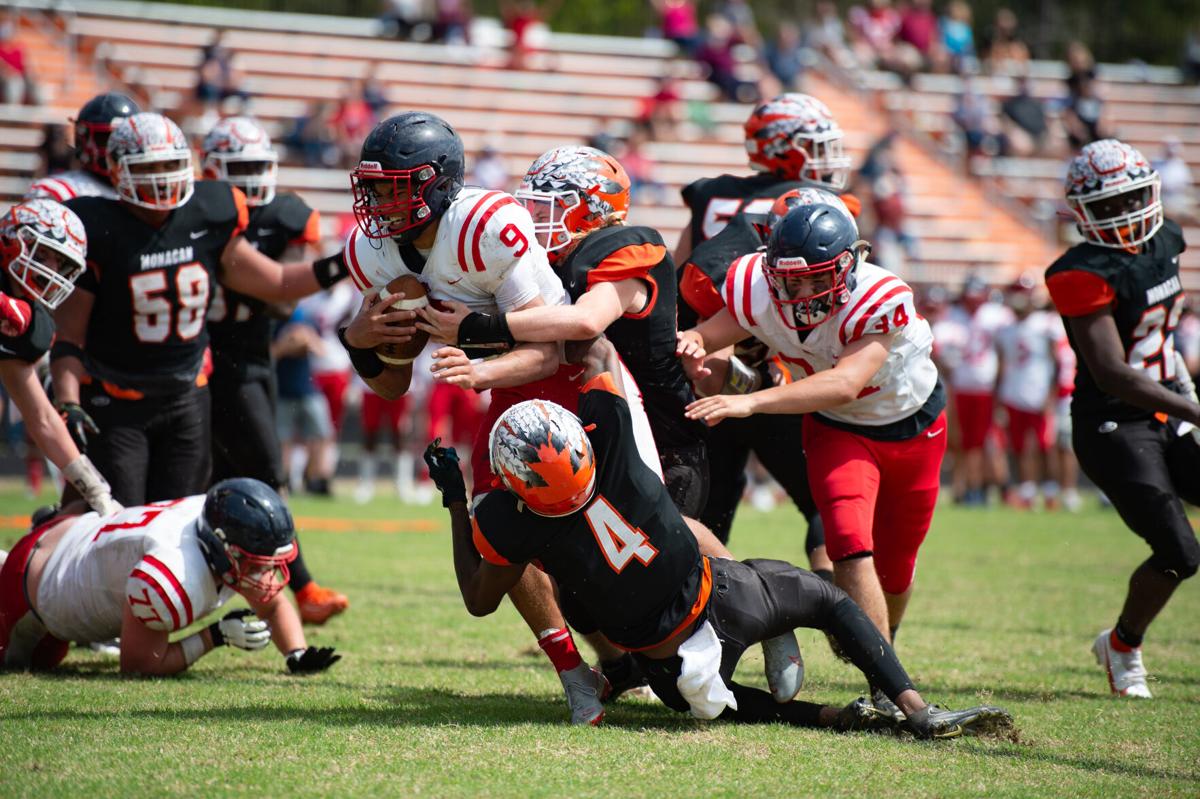 Patrick Henry quarterback Jordan Allen (9) uses his legs to drive for the Patriots’ first touchdown, running over Monacan’s Kyjuan Pettus (4) in the process. But the Chiefs held on for a 28-19 victory in a Region 4B semifinal at Monacan on Saturday, April 10, 2021. 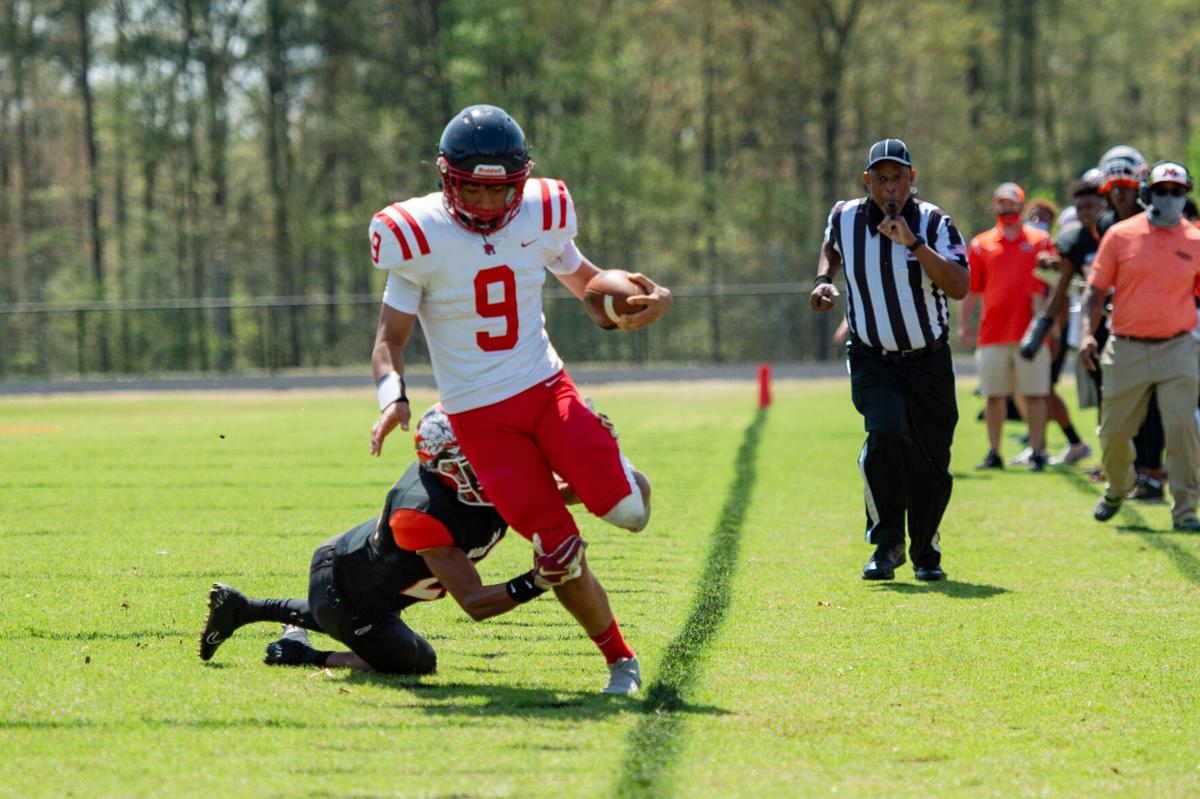 Patrick Henry quarterback Jordan Allen (9) tiptoes down the sideline on a quarterback keeper for a first down in a 28-19 loss to host Monacan in a Region 4B semifinal on Saturday, April 10, 2021. 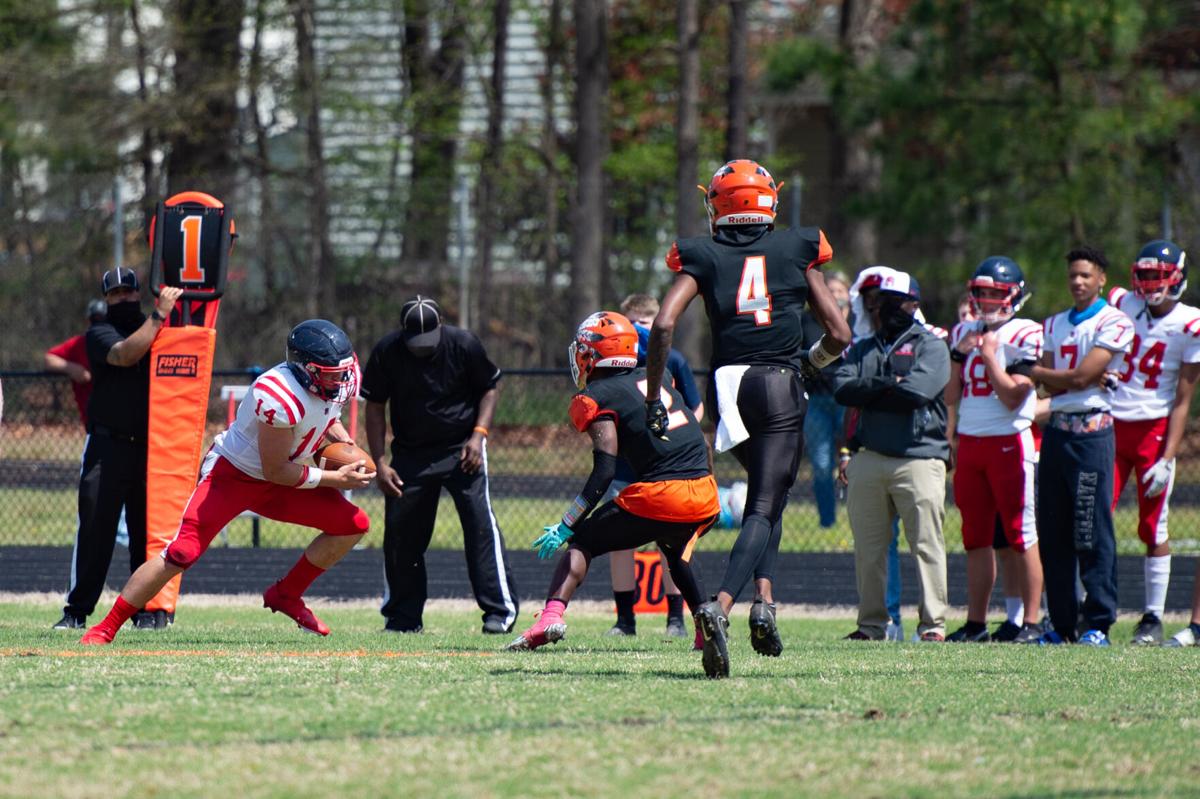 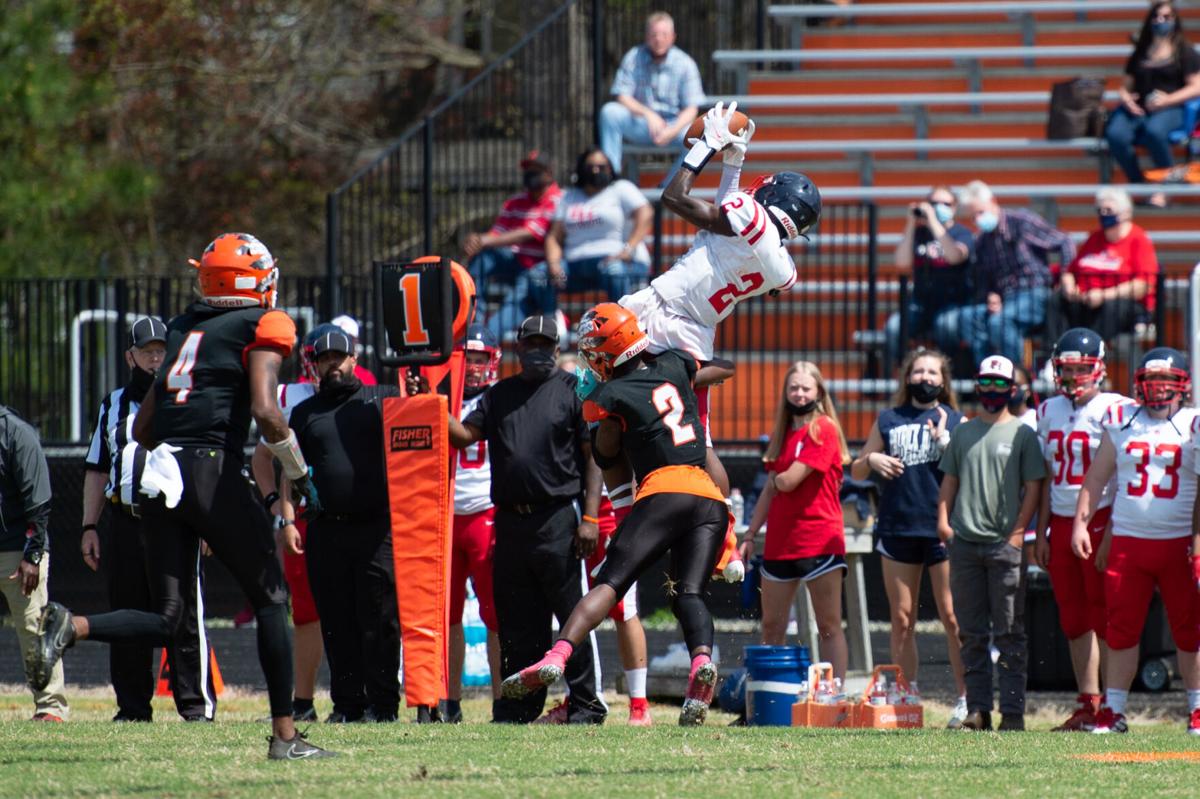 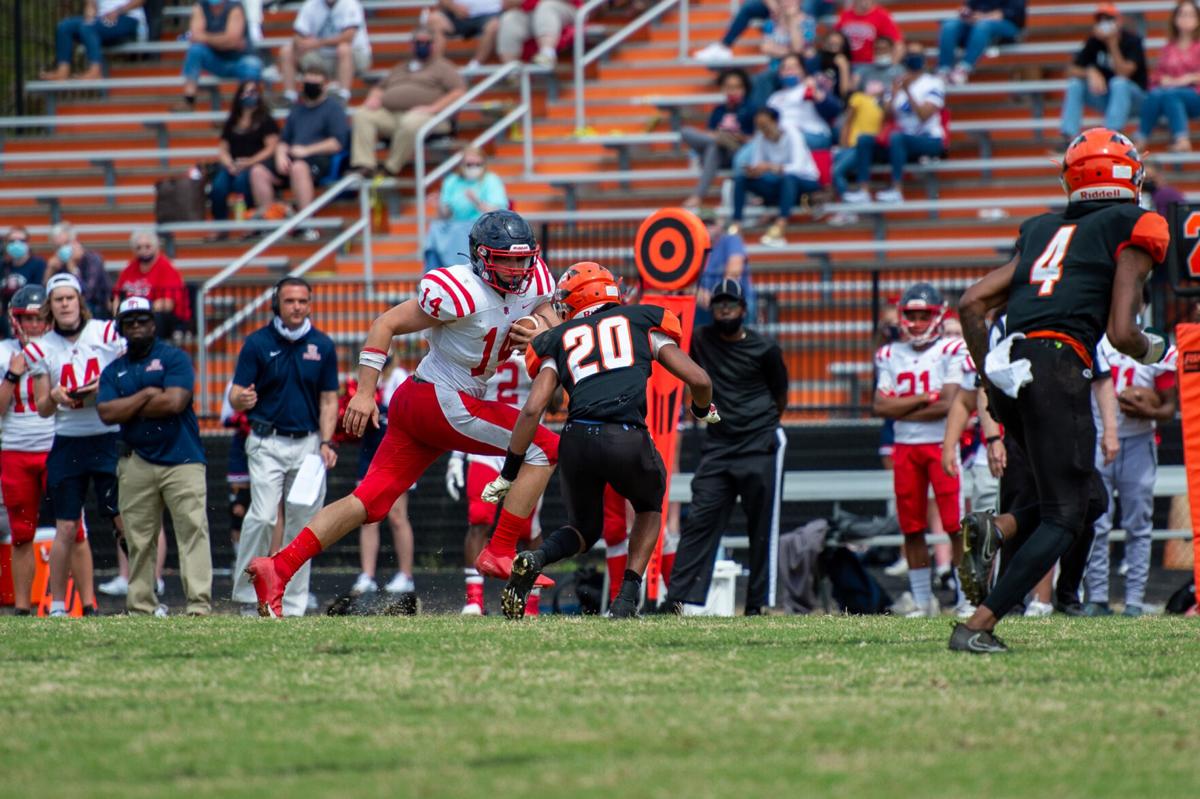 MIDLOTHIAN – When he put up his Twitter account after his junior season, Monacan High senior quarterback Tyler Hensley included a hashtag: #TheBombSquad.

The Chiefs have multiple dimensions on offense. They can run behind back Keshawn Jefferson. And they can throw it all over the field with Hensley and a stable of fast receivers.

They like to wind up and throw it deep, too, something they did several times in a 28-19 victory over Patrick Henry in a battle of unbeaten teams in the Region 4B semifinals Saturday at Monacan.

Top-seeded Monacan (7-0) will play No. 2 King George (7-0) in the region championship game next week. The game tentatively is scheduled for Friday at 7 p.m. at Monacan.

He finished 17 of 21 for 232 yards, with three TDs and one interception. He had two TD passes to McLeod.

“We want to throw deep,” Hensley said. “I thought [The Bomb Squad] was a fitting name.

“My favorite thing is to throw deep, but we can do anything.”

Patrick Henry (6-1) took away Monacan’s running game early. So the Chiefs did the other thing and went to the air.

Monacan coach Jim Henderson set an aggressive tone on the first drive, going for it on fourth-and-7 at the Chiefs’ 43. Hensley found McLeod for 10 yards.

Then Budu made a terrific catch of a ball that was deflected on the 62-yard completion, setting up Jefferson’s 2-yard TD run.

The Patriots used the legs of quarterback Jordan Allen and back James Epps to tie the game.

Monacan regained the lead when Hensley dropped a ball over coverage into McLeod’s hands for a 29-yard TD. McLeod had five catches for 70 yards. Pettus had seven for 82 yards.

“That’s what makes our passing game so strong,” said McLeod, who also had an interception. “Everyone in our receiving corps can do something with the ball, get down the field and get under it.”

The Chiefs increased the lead to 21-7 after Domonic Moreno forced a fumble on a sack and Daveon Gray recovered it in PH territory. Hensley found Pettus open for the 40-yard TD. He’s scored at least one touchdown in every game.

Getting good protection from his offensive line for the most part, Hensley completed his first nine passes in a penalty-filled contest. He went into the game with 1,182 yards, 13 TDs and two interceptions.

“He loves chucking it deep, and I love calling plays chucking it deep,” Henderson said. “That’s a match made in heaven. The kicker is it would be a lot better if we didn’t get first-and-30 or second-and-25 and wouldn’t be in a lot of situations where we had to do that.”

Patrick Henry, turning some short passes into long gains and pounding away with its running game, scored on Allen’s 9-yard run on the opening drive of the second half to cut Monacan’s lead to 21-13.

A 33-yard run from Jefferson (18 carries, 110 yards) helped get the Chiefs to the PH 10 on the ensuing possession. Hensley scrambled around before humming a bullet to McLeod in the back of the end zone for a TD.

“They were able to capitalize on big plays,” said Patrick Henry head coach Ken Wakefield Sunday. “We put them in some situations third-and-long. I think actually the first one was fourth-and-long and they completed a long, some long passes – if not for a touchdown, it definitely got them down to the red zone and that was really the big story of the game.

“We knew that they had athletes going in but, you know, we gave up some key big plays and we had a couple of costly turnovers that ended up kind of biting us at the end.”

Patrick Henry didn’t let Monacan get comfortable. The Patriots put together an 89-yard TD drive, capped by Allen’s 1-yard run. PH went for the 2-point conversion. After being backed up by a false start, Allen was taken down well short by Jefferson.

A last-gasp drive reached the Monacan 10 with 1:05 left. Allen was sacked by Danny Johnson on third down, pushing the ball back to the 19, and a field goal attempt was blocked by Lloyd Williams.

Allen had 63 yards rushing and was 7 of 13 passing for 186 yards with an interception. Epps had 70 yards rushing, and Camden Byrd was a force on both sides of the ball. He had four catches for 104 yards and three carries for 14 yards.

Despite the disappointment of the loss, Wakefield felt good about the season overall and about what his Patrick Henry athletes achieved.

“It’s a great year. There's no doubt. They accomplished a lot,” Wakefield said. “You know, we had to play each (Hanover County) team twice and we were looking to come away with wins. The kids really fought hard right up until the end yesterday. Things just didn't go our way.”

And Wakefield looks forward to the future.

No injuries reported in fire

The Mechanicsville Local Letters to the Editor: Week of April 28, 2021

Primaries not the place for negative ads

ASHLAND – For over a year, Senior Connections has been providing groceries to its senior sites and others in need. In Hanover County, grocerie…

From the managing editor: Who we are and what we do at Richmond Suburban News

While we enjoy speaking to and helping our readers and advertisers, I’ve realized it’s time to reintroduce the staff of Richmond Suburban News…

GRADUATION DAY - 2021 ceremonies to be held at Meadow Event Park

BLEDSOE, Patricia “Pat” Bottoms, 79, of Mechanicsville, Va., passed away on March 30, 2021. She is now reunited with her infant daughter, Susa…

Patrick Henry quarterback Jordan Allen (9) uses his legs to drive for the Patriots’ first touchdown, running over Monacan’s Kyjuan Pettus (4) in the process. But the Chiefs held on for a 28-19 victory in a Region 4B semifinal at Monacan on Saturday, April 10, 2021.

Patrick Henry quarterback Jordan Allen (9) tiptoes down the sideline on a quarterback keeper for a first down in a 28-19 loss to host Monacan in a Region 4B semifinal on Saturday, April 10, 2021.