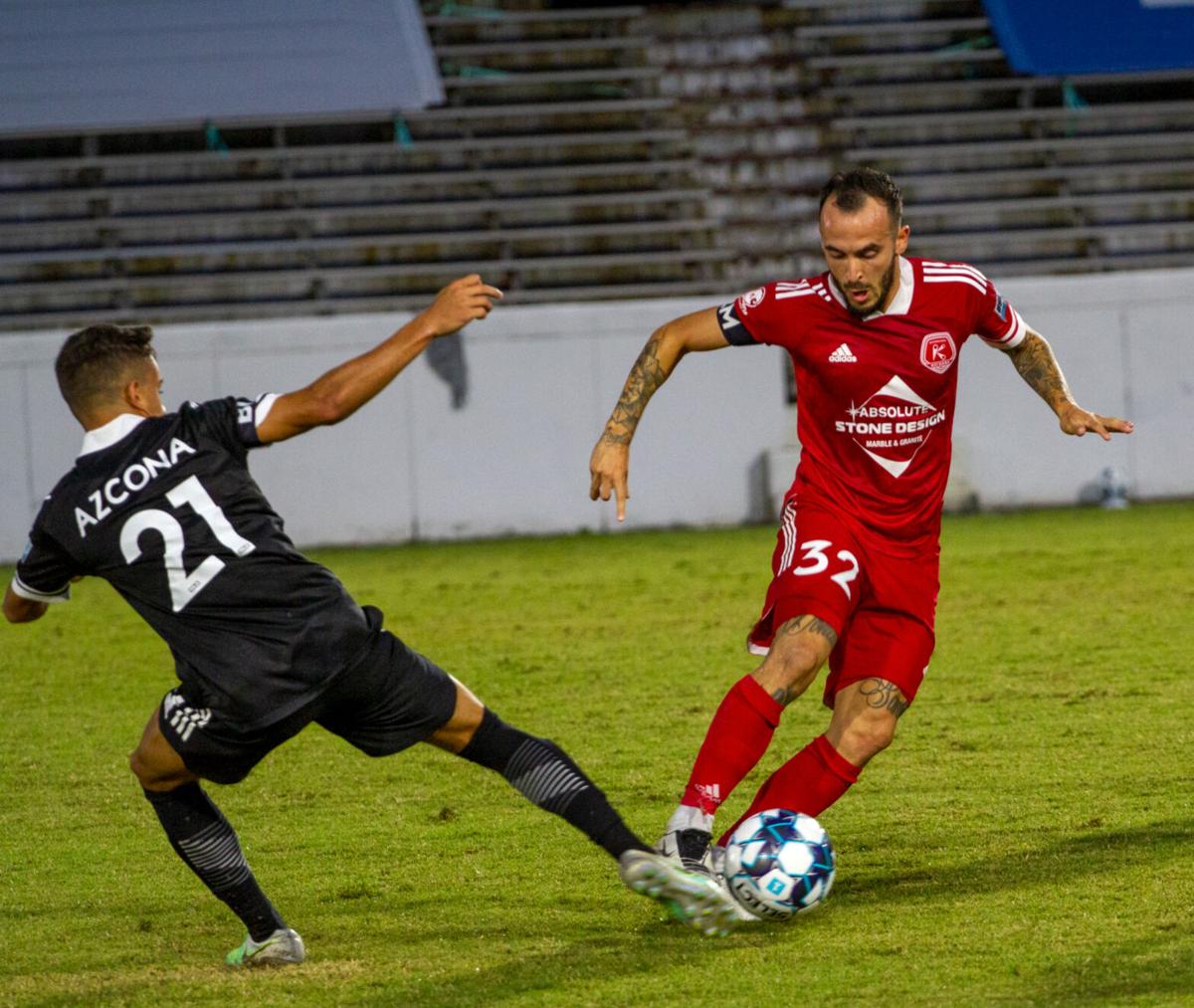 RICHMOND, Va. -- Emiliano Terzaghi (32) wins a ball from Fort Lauderdale's Edison Azcona in the Kickers' 2-1 win in a makeup against Fort Lauderdale CF on Wednesday, Sept. 23, 2020. Terzaghi scored both of Richmond's goals. 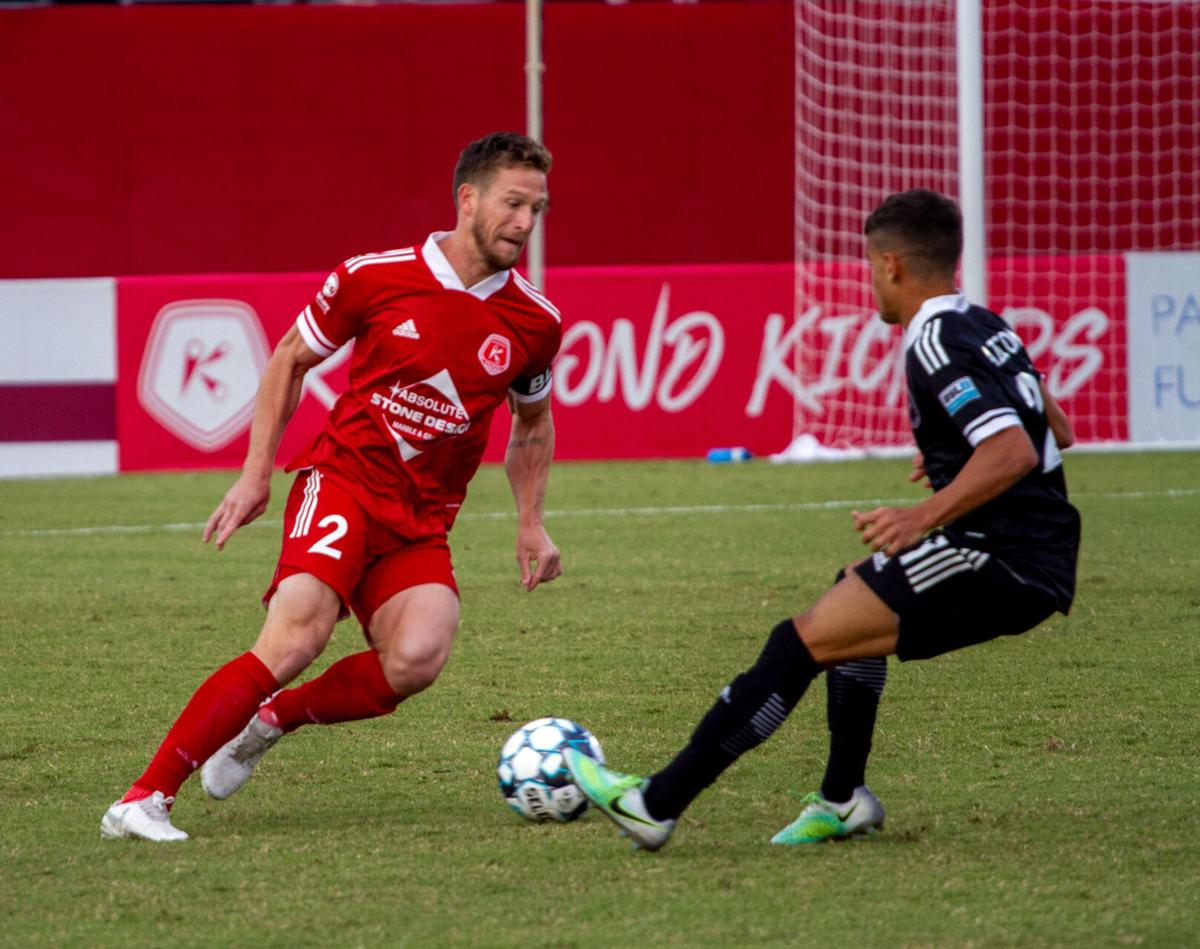 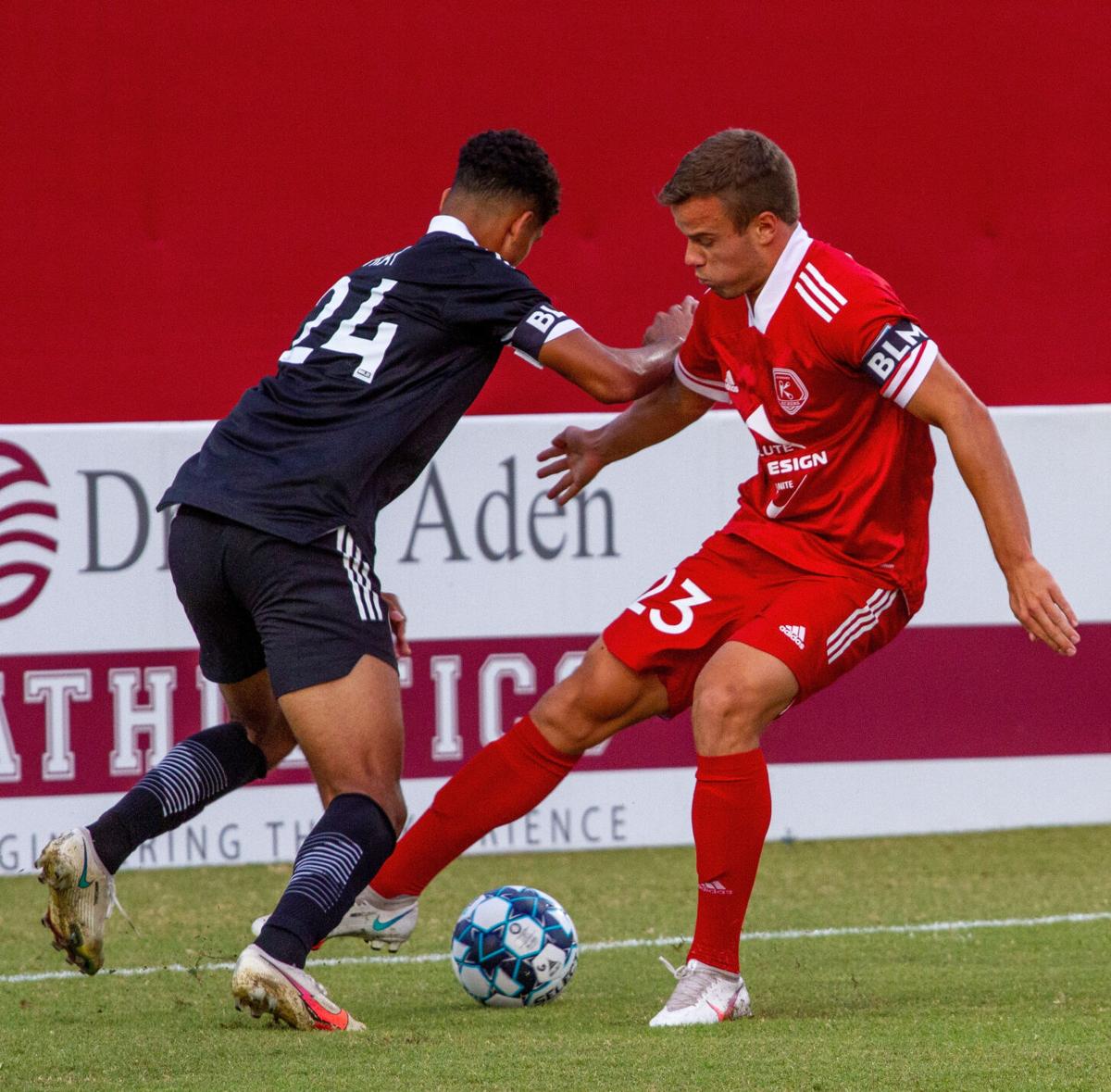 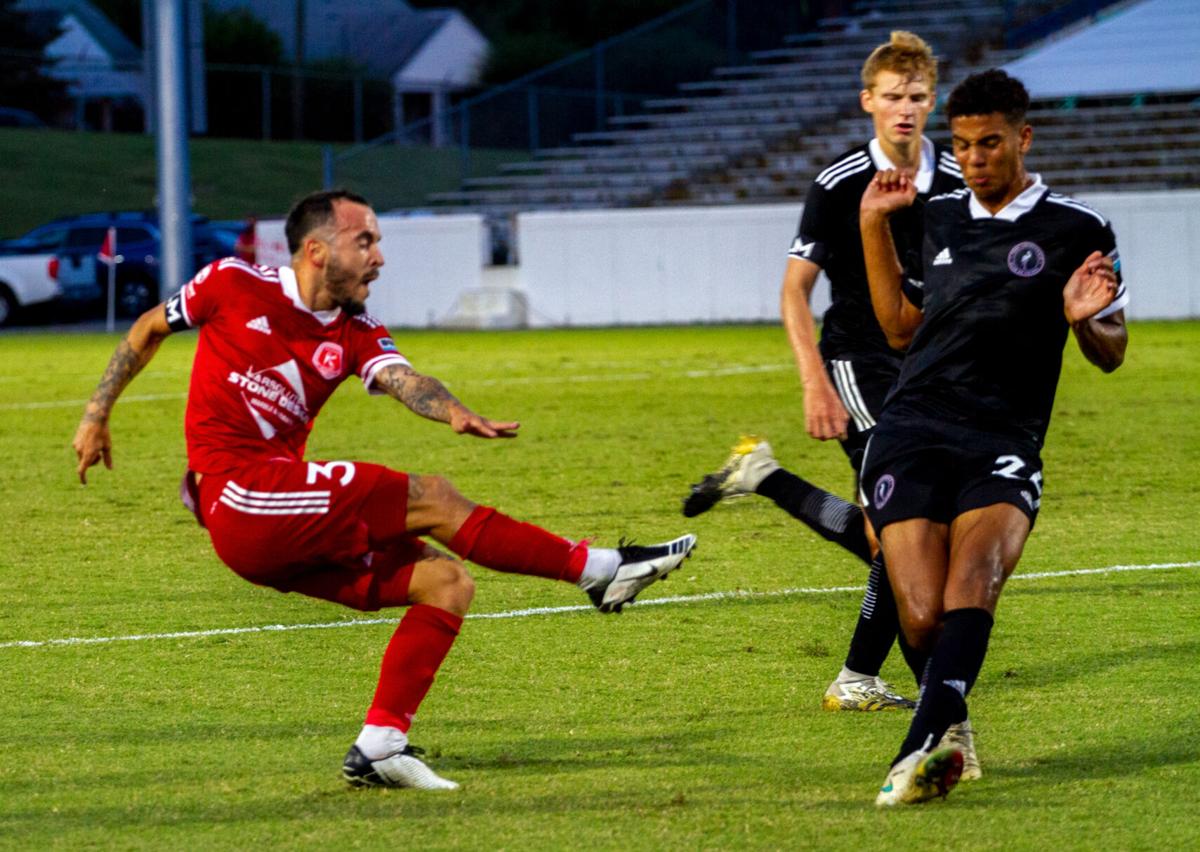 RICHMOND, Va. -- Richmond's Emiliano Terzaghi (left) fires away for an equalizer in the first half of the Kickers' 2-1 win in a makeup match against Fort Lauderdale CF at City Stadium on Wednesday, Sept. 23, 2020.

RICHMOND – The Richmond Kickers, after clawing to the No. 2 spot in the USL League One standings, stumbled a bit after a 2-2- tie at Tucson on Sept. 5 and a 2-1 loss to the Chattanooga Red Wolves on Sept. 12. Then their home match against Orlando City B had to be postponed because of a positive COVID-19 test within the Orlando organization.

The patch allowed the Red Wolves to leapfrog the Kickers into second place in the league, a critical spot as only the top two teams will make the postseason – the only playoff will be a championship game.

With two games – a makeup at City Stadium against Fort Lauderdale Wednesday and an away game Saturday at Union Omaha, the Kickers needed a good week to get back behind the league-leading Greenville Triumph. A two-goal performance by Emiliano Terzaghi in a 2-1 win Wednesday night and a goal from Ivan Magalhães in a 1-0 victory Saturday gave Richmond exactly the week it needed.

Wednesday’s win against Fort Lauderdale at City Stadium was a comeback affair. The visitors took a 1-0 lead in the fifth minute after Ricky Lopez-Espin, with an assist by Ian Fray, scored through a crowd in front of the Kickers’ net.

But Richmond did not give up, and after spending the early part of the first half on its back foot, equalized in the 26th minute when defender Ian Antley found Terzaghi open at the corner of the box to the right of the Fort Lauderdale net. Terzaghi fought around a pair of opposing defenders to find an opening and expertly put the ball into the far side of the goal.

It was a nice bit of redemption for Antley, who had been suspended for the game against Tucson after drawing a red card in the Kickers’ 2-1 win over Greenville on Aug. 29.

“I made a costly mistake and missed the game against Tucson this road trip, and then last time out I didn’t play as well as I wanted to play,” Antley said. “Getting back into the game at home was huge, especially to get a result against a really good Fort Lauderdale team. We knew they were going to come in and battle us hard.

“To come back, especially down 1-0, just shows a lot of resiliency within the group, you know. We’re going to come back and win games no matter what. Fight to the end.”

Kickers’ head coach Darren Sawatzky was pleased with his team’s performance overall, but noted they needed to make some course corrections in the first half.

“One of the things we needed to do better in the first half was to pass guys on [on defense],” Sawatzky said. “The communication from the defensive line and the midfield line wasn’t as quick as it needed to be. That young [Fort Lauderdale] team is very good. That’s a very good soccer team. They played great soccer. We needed to move guys quicker and pass guys on. We just weren’t doing it quick enough. I think in the second half we did a much better job of that. That’s credit to Kyle Venter, Ivan [Magalhães] and Viktor [Falck] talking more.

Saturday night, Richmond and Omaha were in a bitter, scoreless scrap until Magalhães found an opening in the 71st minute. The shutout was Kickers’ goalkeeper Akira Fitzgerald’s third shutout of the season.

Local runners get back on course in 5K

MECHANICSVILLE – Local high school runners have had a long time off, but that doesn’t mean they have spent the months in isolation as a result…

RICHMOND, Va. -- Emiliano Terzaghi (32) wins a ball from Fort Lauderdale's Edison Azcona in the Kickers' 2-1 win in a makeup against Fort Lauderdale CF on Wednesday, Sept. 23, 2020. Terzaghi scored both of Richmond's goals.

RICHMOND, Va. -- Richmond's Emiliano Terzaghi (left) fires away for an equalizer in the first half of the Kickers' 2-1 win in a makeup match against Fort Lauderdale CF at City Stadium on Wednesday, Sept. 23, 2020.