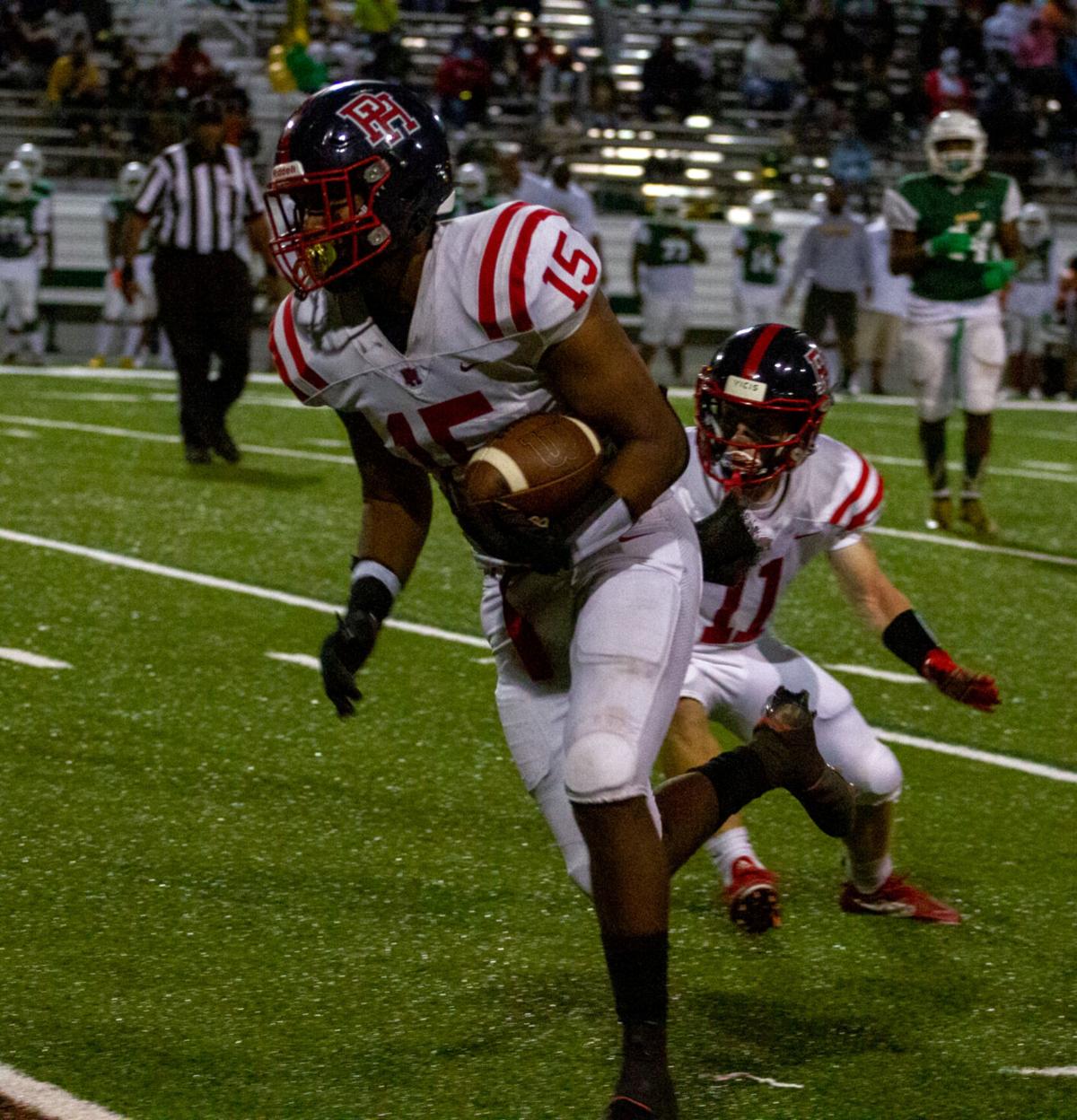 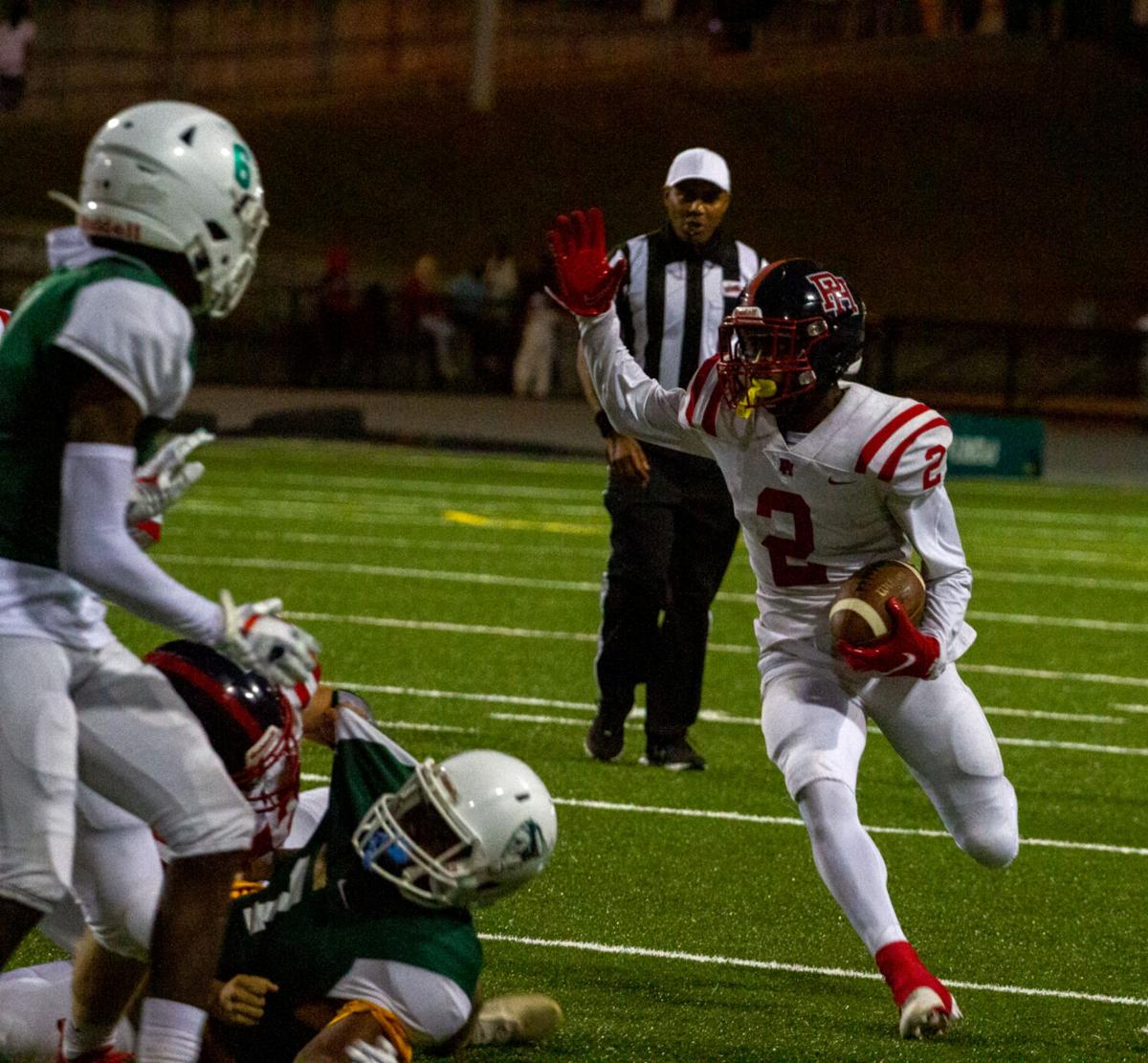 HENRICO, Va. -- Patrick Henry's Jayden Mines (2) seems to grab some air for leverage as he cuts toward midfield around some Henrico defenders in the Patriots' 30-12 victory over the host Warriors on Friday, Oct. 2, 2021. 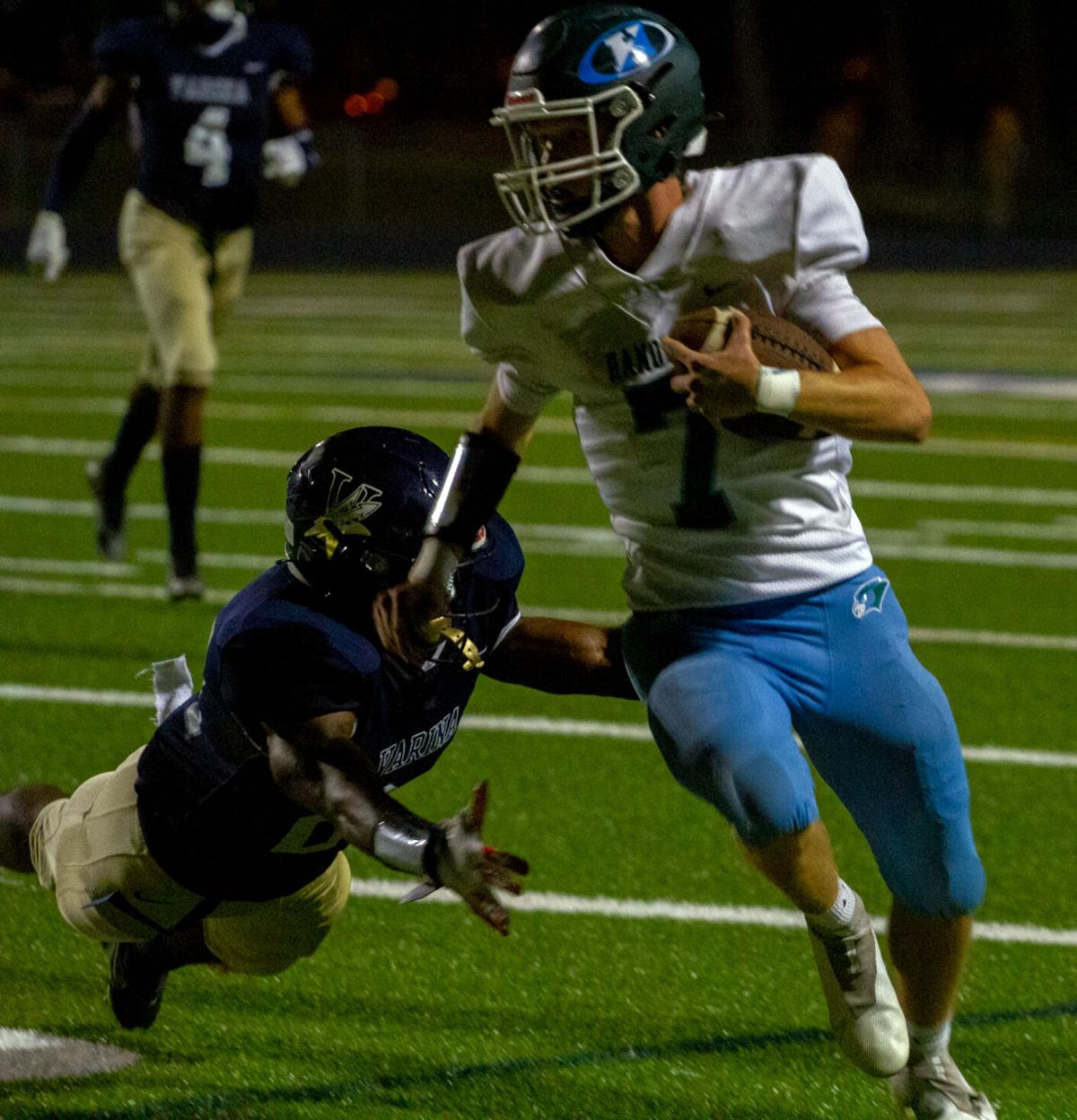 HENRICO – Patrick Henry was clearly the better team Friday night, but the Patriots also seemed to be vying for an Oscar for the team most likely to get in its own way. The team pulled off a 30-12 victory over host Henrico, but the number of penalties it was assessed did not suggest the kind of play that will yield an advantage over its next opponent, Highland Springs.

“It’s frustrating,” said Patrick Henry head football coach Ken Wakefield. “Penalties . . . a lot of things that we just didn’t do to the best of our abilities – that’s the part that’s disappointing.”

When the Patriots were on their game, they were almost unstoppable. They were led by quarterback Jordan Allen, who had 12 carries for 104 yards and three touchdowns and who completed 7 of 11 passes for 92 yards.

The Patrick Henry defense was, for the most part, suffocating, keeping the Warriors out of the end zone until the second half. Unfortunately, Patriot penalties contributed significantly to the two Henrico scores.

“We’ll clean that up. We’ll get better,” Wakefield said. “Things got chippy at different times and, you know, sometimes when the emotions get the best of you, you start playing undisciplined and uncharacteristic of yourself. Those are the things we have to grow and get better at.”

All three of Allen’s touchdowns came on the ground on runs of 24 yards, 2 yards and 1 yard. The remaining Patrick Henry touchdown came on a 3-yard run by Corenzo Green.

VARINA – For a while, it looked like Hanover might hold its own against host Varina, ranked No. 4 in the Times-Dispatch poll.

But that appearance only lasted as long as it took the Blue Devils to get up some steam. Once they did, they controlled land and air in a time-consuming attack en route to a 34-12 Varina victory.

Hanover quarterback Cole Elrod had a hand in both Hawk scores. The first came on a 16-yard pass from Eldrod to Beau Sahnow. The second was a 3-yard run by Elrod.

Varina quarterback Myles Derricott had a hand in three Blue Devil touchdowns: a 15-yard pass to Kamaree Wells, a 35-yard pass to Anthony Fischer and a 10-yard toss to Kaveion Keys.

HENRICO, Va. -- Patrick Henry's Jayden Mines (2) seems to grab some air for leverage as he cuts toward midfield around some Henrico defenders in the Patriots' 30-12 victory over the host Warriors on Friday, Oct. 2, 2021.