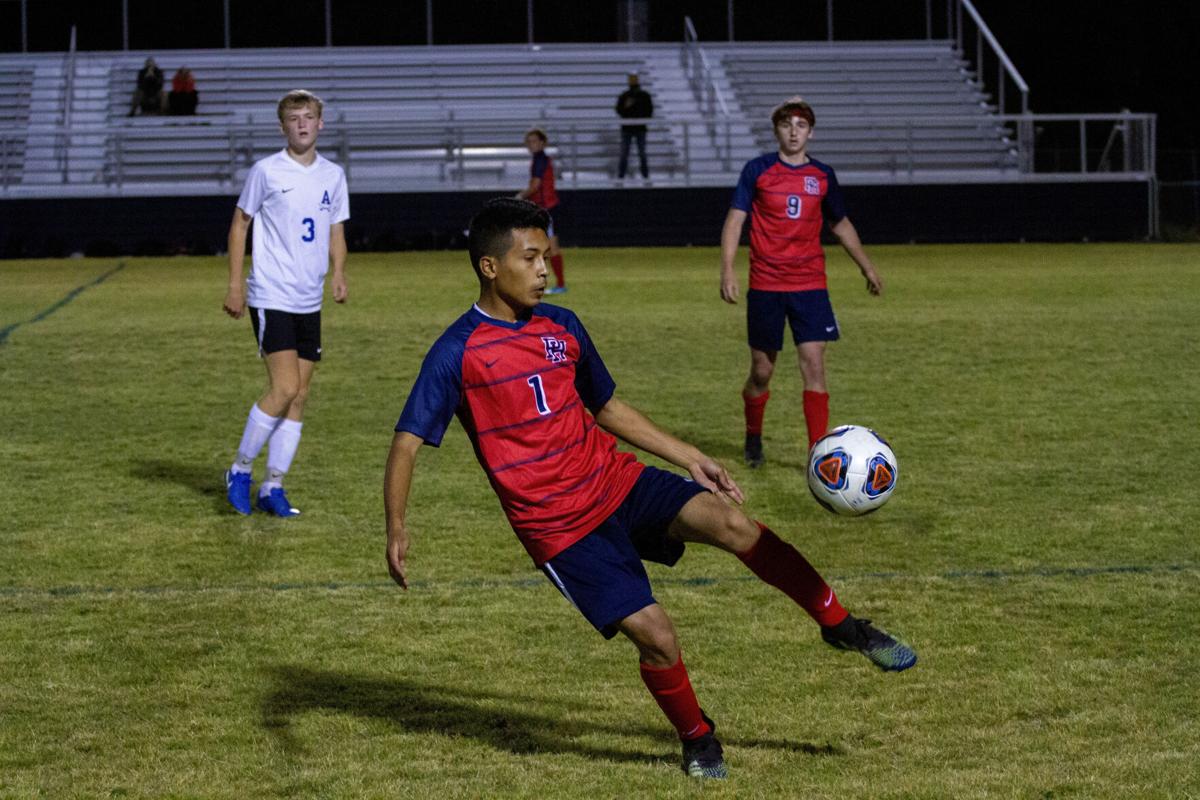 ASHLAND, Va. -- Patrick Henry's Alejandro Tuarz-Delcon (1) turns the ball away from the Patriot goal in Patrick Henry's 2-nil shutout of visiting Atlee on Friday, May 14, 2021. 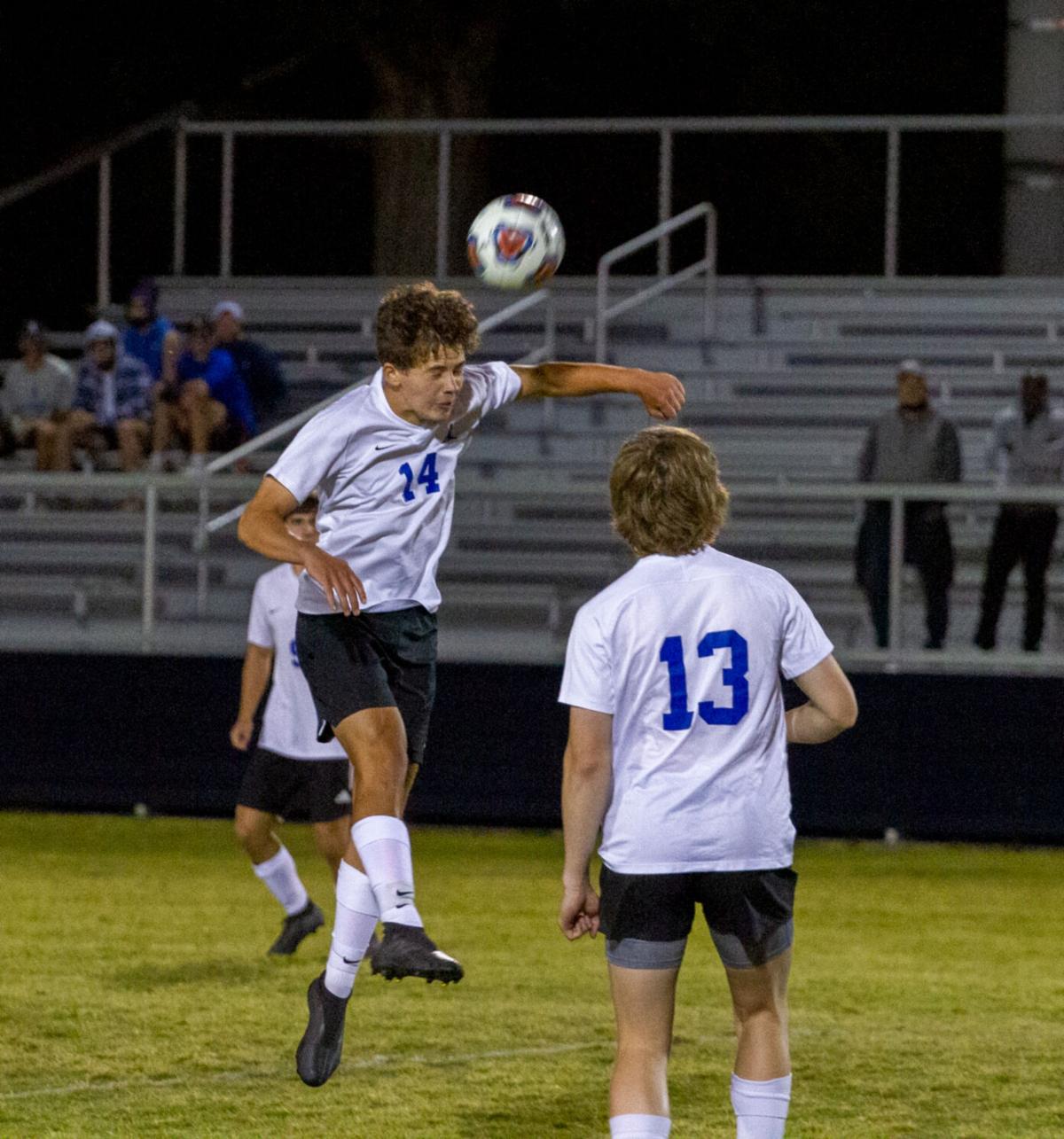 ASHLAND – For much of the 80 minutes on Patrick Henry’s pitch, Atlee and the Patriots battled themselves to a standstill. It was a pitched battle, too, with plenty of contact – pushing, pulling, aggressive tackles – and also with plenty of pleading to referees for sympathetic calls.

Each team got its share of calls, and resultant penalty kicks and yellow cards.

But only one of the teams got what it needed most: goals. The Patriots defeated their visitors 2-0.

Thirty-six minutes in, Patrick Henry’s Will Werner got the only goal the Patriots really needed.

“It was a beautiful goal,” said Patrick Henry head coach Chuck Altizer. “High ball, came down to his feet, and one-time cracked it. We work on in practice and he took it to the game today. It was a great goal for him, good feeling for him. I was very proud of that.”

The Patriot fans were as well. The cheer from the stands could be heard with ease near Patrick Henry’s baseball and softball diamonds.

The significance of getting the first goal did not escape anyone.

“Last time out – we played [Atlee] Monday – we didn’t get that first goal,” Altizer said. “We had to rally. We had to rally back to get the lead. When you fall behind, teenagers are going to press. They’re going to make mistakes and we did that a couple of times.”

With Werner’s goal, the Patriots could be more assured as they walked back on the pitch for the second half.

We got that early [goal] and were able to relax and play a good second half,” Altizer said.

The Patriots did not have to wait until late in the second half for an insurance goal. Greg Cover put the ball in the corner of the Raider net in the 57th minute to make it 2-0.

“Again, it’s things we work on in practice: one-twos, be quick, be smart, relax in the final third. We did that,” Altizer said. “We played a beautiful one-two between [Cofer] and my wing, Julio Osorio. Both of them are dangerous strikers and they turned the defense around one-two and [Cofer] was able to find some space and punch in a goal.

“Greg is one of our top scorers and whenever he can get a chance to put a foot on the ball, we’ll take it in the box in that situation.”

Cofer had to thread the ball through a crowd of Atlee defenders.

“He’s got that capability,” Altizer said. “Sometimes you want to shoot in crowds because you deflections. We teach that, ‘Get that shot on!’ We tell the rest of the guys to stay on their toes in case the ball comes back around – maybe we get a second shot. Especially within shooting range, about 20 yards, we want our guys shooting the ball. Anybody who’s on that field in that situation, they’re all capable of putting the ball in the net.”

Cofer’s goal all but sealed the coffin for the Raiders, but they were not inclined to fold. They pressed aggressive attacks throughout. Neither team held an obvious advantage in terms of possession time.

But Patrick Henry’s stubborn defense, anchored by goalkeeper Austin Anderson, kept the ball out of the Patriot net.

Patrick Henry improved to 2-1-1 with the win.

“We talked about it today,” Altizer said. “We felt like we played really well in the loss and the tie and didn’t get the result we wanted. But one of the things we talked about today, the reason for that, is that we didn’t take care of the little things in those games. Today I thought we did a better job of mentally focusing and taking advantage of the little things and that helped us out here.”

ASHLAND, Va. -- Patrick Henry's Alejandro Tuarz-Delcon (1) turns the ball away from the Patriot goal in Patrick Henry's 2-nil shutout of visiting Atlee on Friday, May 14, 2021.