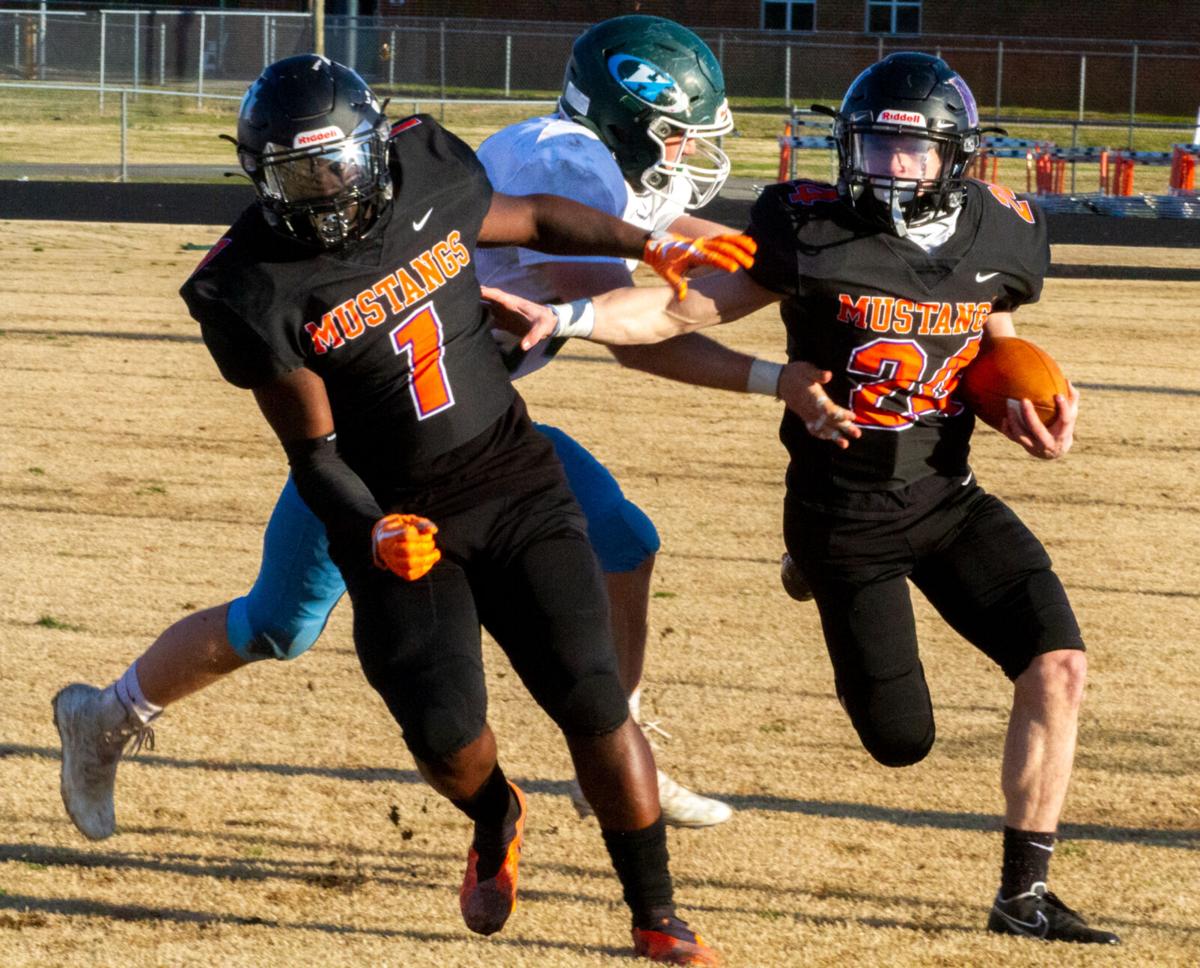 MECHANICSVILLE, Va. -- Mechanicsville running back Cole Varner (24) tries to get away from Hanover's Jackson Currie in the Hawks' 17-14 victory over host Mechanicsville on Friday, March 19, 2021. 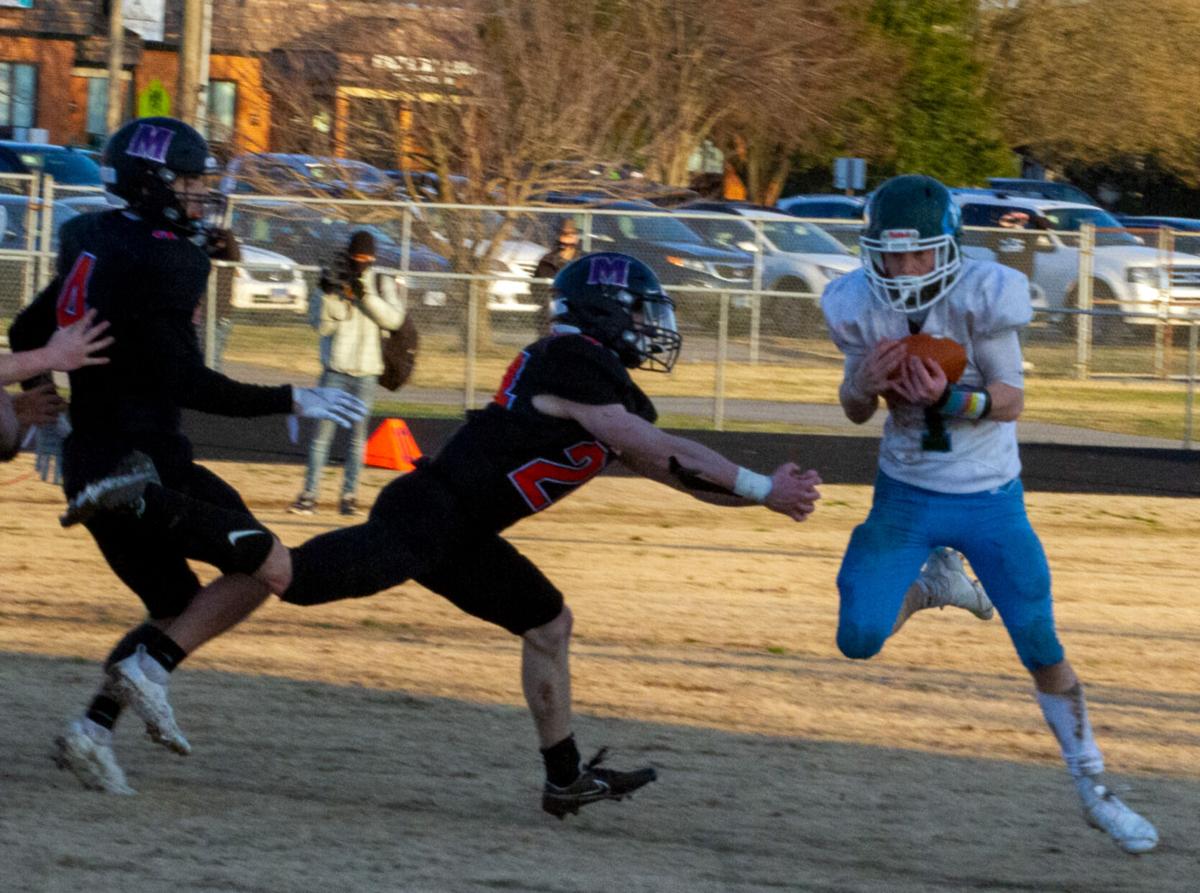 MECHANICSVILLE, Va. -- Hanover's William Flora (1) hauls in an interception late in the first half of the Hawks' 17-14 victory over host Mechanicsville on Friday, March 19, 2021. The turnover set up the first score of the game, a 24-yard field goal by Hanover's Ethan Samardge.

MECHANICSVILLE – Placekickers rarely attract the plaudits given to other skill positions in football, like quarterbacks, running backs, receivers and the like, but that doesn’t mean their jobs are any less important for the success of their teams. Friday night, Hanover placekicker Ethan Samardge more than earned his stripes.

With less than a minute before the first half expired, the game scoreless and the Hawks with the ball on fourth down at the Mechanicsville 6, Hanover called a timeout to prepare for a field goal attempt. The Mustangs then followed with three timeouts of their own to see if they could rattle the Hawk kicker.

The ploy didn’t work. With a wisp of a second remaining, Samardge launched a 24-yard lob toward the goal posts. It didn’t look like it would make it. The ball started to fade short and drifted right – but it just found its way through the uprights. Those three points proved the winning margin in Hanover’s 17-14 win.

“Three points on the board, that’s what won the game, but it was the entire team, the entire unit,” Samardge said. “I couldn’t have done it without them. It was 100% team effort.”

But there comes a time where the burden is all on Samardge – and his ability to tune all the distractions out.

“It’s just me and the ball,” he said. “They tried to throw me off mentally with those three timeouts, I think it was. It don’t work. I stay locked in almost like we do in practice. You’ve got to stay calm. You’ve got to block out all the noises and everybody yelling at you.”

No matter how locked in he may be, he can still feel stress – as he did as the ball drifted toward the upright.

“You better bet I was praying. I was, like, ‘Please go in!,’ ” Samardge said. “My left foot slipped a little bit because the ground was a little muddy, but that’s no excuse. I still was praying for it to go in. It was a close one.”

The Mustangs went ahead in the third quarter on an 8-yard run by quarterback Logan Harris, but the lead did not last long. The Hawks responded with a pair of touchdowns in the fourth quarter, both on runs by Hanover quarterback Levi Huesman of 8 and 12 yards, respectively.

Huesman led the Hawk offense, completing 15-of-29 passes for 125 yards and carrying the ball 23 times for 68 yards and his two touchdowns.

Mechanicsville got the final score of the game in the final minute on a 1-yard run by Avant Johnson. The Mustang placekicker, Thomas Richman, was steady as well, providing both Mechanicsville extra points.

The victory is further evidence that Hanover head coach Sam Rogers’ efforts to instill a winning mentality at Hanover is paying off.

“We’ve been at it since February of last year,” Samardge said. “The coaching staff, all the kids, everything has changed. The culture is completely different at Hanover. It’s on its way back to where it once was. We’re on a roll. I could not be more proud of the coaches and the entire team.”

MECHANICSVILLE, Va. -- Mechanicsville running back Cole Varner (24) tries to get away from Hanover's Jackson Currie in the Hawks' 17-14 victory over host Mechanicsville on Friday, March 19, 2021.

MECHANICSVILLE, Va. -- Hanover's William Flora (1) hauls in an interception late in the first half of the Hawks' 17-14 victory over host Mechanicsville on Friday, March 19, 2021. The turnover set up the first score of the game, a 24-yard field goal by Hanover's Ethan Samardge.