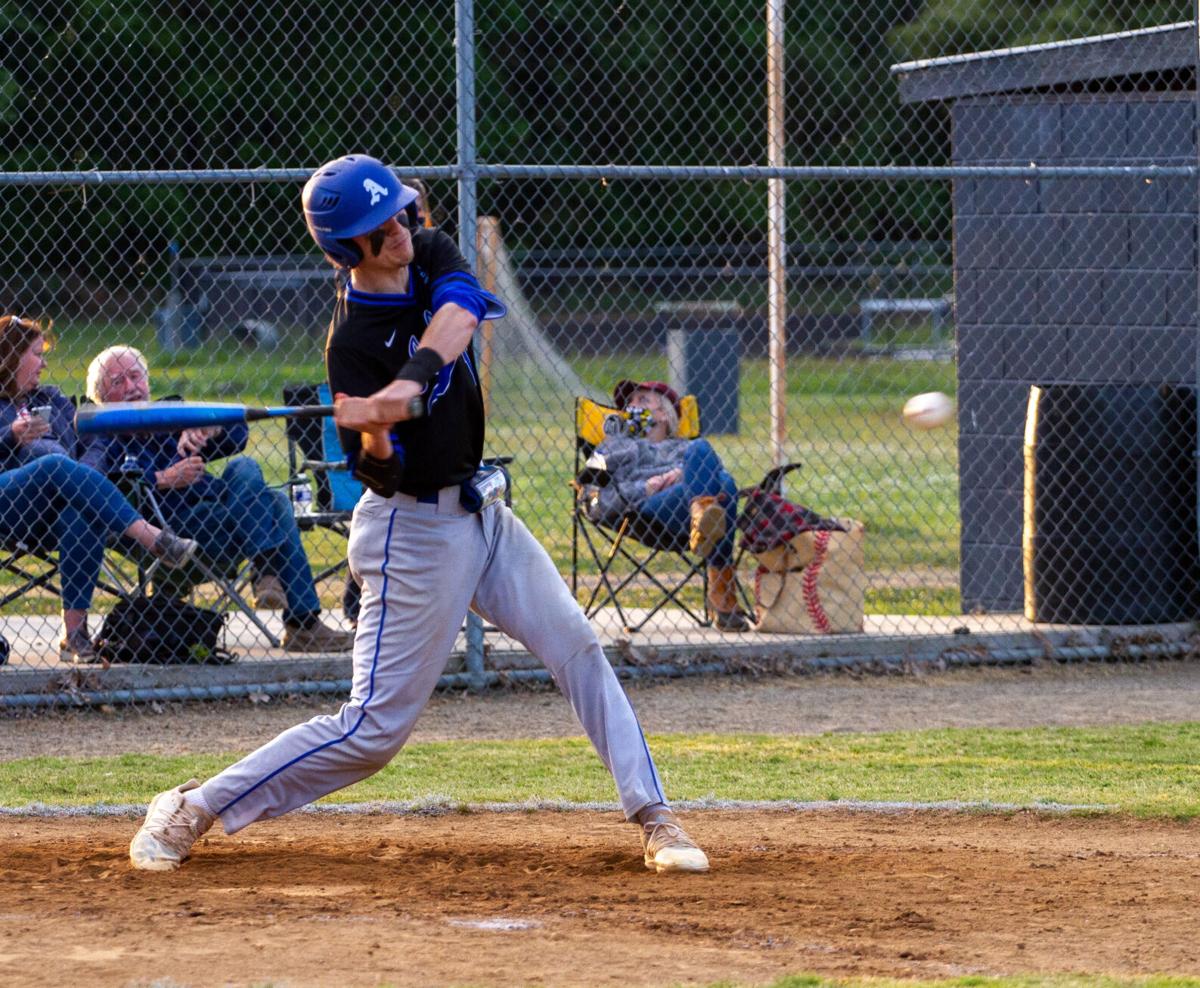 ASHLAND, Va. -- Atlee first baseman Aaron McKeever gets the bat around for a two-run double in the Raiders' 10-0 shutout over host Patrick Henry on Friday, May 14, 2021. 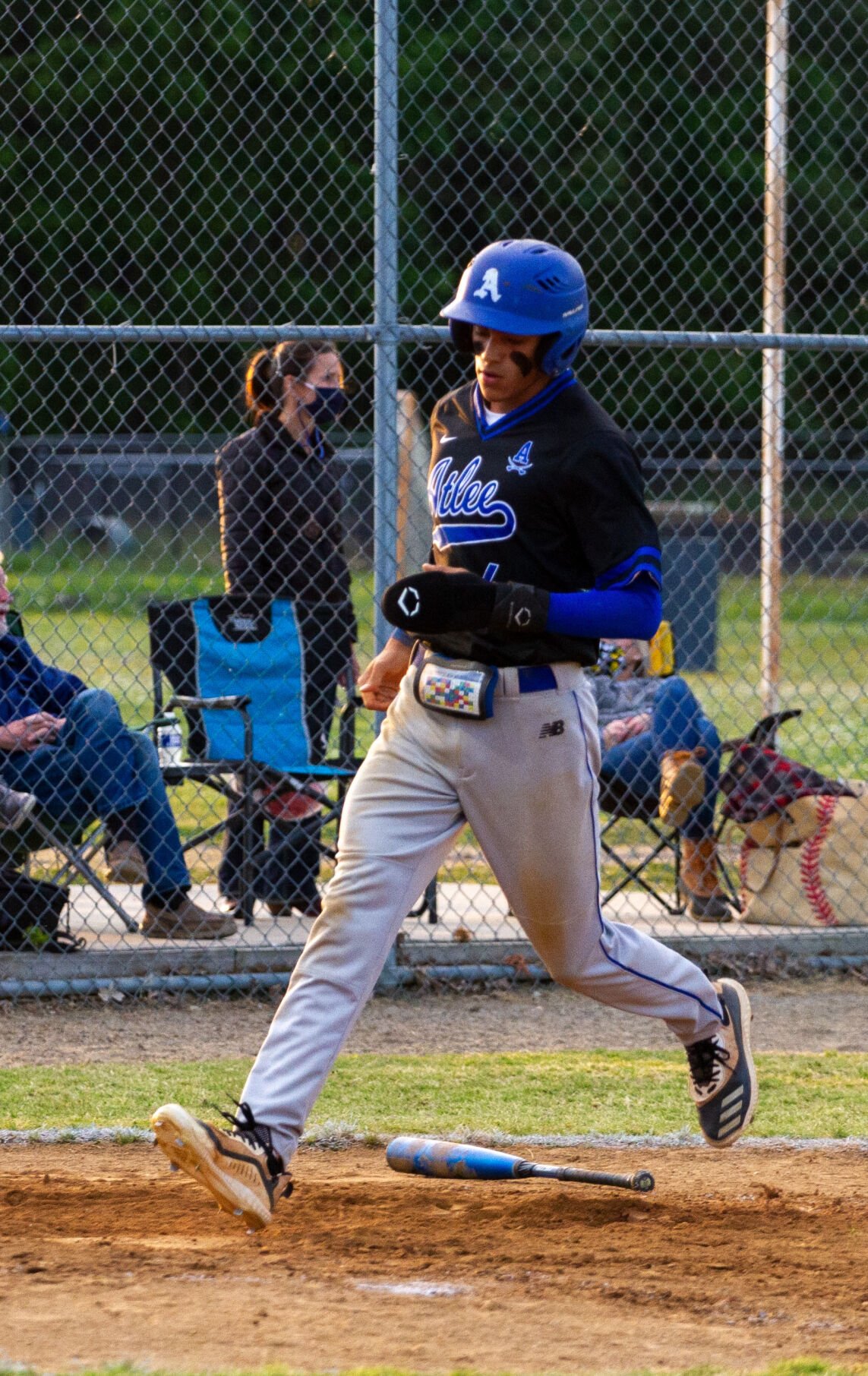 ASHLAND, Va. -- Atlee center fielder Miguel Montoya scores on a double by Aaron McKeever in the Raiders' 10-0 shutout over host Patrick Henry on Friday, May 14, 2021.

In a county with strong baseball tradition, it is not difficult to see all four Hanover high school baseball teams beat up on one another. So far this season, Hanover and Mechanicsville have been doing most of the beating. Atlee and Patrick Henry had been doing all of the getting beaten.

That changed last week when both the Patriots and Raiders each picked up their first victory.

Patrick Henry got into the win column first with an 9-4 win over the Mustangs on May 11. The Patriots benefitted from 16 gimmes from the Mechanicsville pitching staff.

“Thirteen base on balls and three hit batters – and three hits. That scored nine runs,” said Patrick Henry head baseball coach Sam Hart. “That helped us out. We had some good at-bats. We had a lot of traffic through the bases by being selective in the (strike) zone.”

While the platoon of Mechanicsville pitchers struggled – only two of the five, starter Brett Allen and closer Cole Nicely, kept the Patriots they faced from reaching home – Patrick Henry’s two pitchers, starter Eoin Rossman and close Patrick Brizendine – both turned in strong performances.

“Eoin Rossman pitched a great ball game for us and hit a three-run home run for us there at the end,” Hart said. “The sophomore Patrick Brizendine came in and got the last six outs for us.”

The COVID-19 pandemic has contributed to Patrick Henry’s diamond woes this year. Most of its players were due to get their first varsity experience last year, but the season was cancelled. All but one of the Patriot players – including a large number of seniors – are essentially playing their rookie season now.

“We have a lot of seniors, but they’ve never played varsity baseball,” Hart said. “We have one person out of 16 that’s played varsity baseball at Patrick Henry, and that was Eoin. He led us on the mound and led us with the home run (on May 11) – in fact, he had two hits that night. He’s been a good leader for us, a quiet leader.”

Rossman did what he could against Atlee Friday, but the pitching bugs that gave the Patriots a boost against Mechanicsville bit them against the Raiders.

“We took a lot of bases on balls Tuesday night and gave a lot tonight,” Hart said.

Patrick Henry gave up 10 walks on the night. Brizendine started the game, but fortune was not on his side. Brizendine pitched a scoreless first inning. His second inning began with the first batter he faced reaching on an error.

Were it not for that error, Brizendine might have pitched a scoreless second inning, too. All four of the runs he gave up that inning came across after two outs. Brizendine finished the inning with a strikeout to his counterpart, Atlee starting pitcher Mike Joyce.

While the Patriot pitchers struggled, Joyce pitched a gem for the Raiders, giving up two hits, two walks and no runs in a complete-game five innings of work.

Friday’s win was a nice turnaround for Atlee after a frustrating 19-7 loss to Hanover on May 11.

“We had a good week of practice after the debacle against Hanover,” said Atlee head coach John Corbin. “The kids responded well. They’re starting to stick to the game plan and execute when they’re called upon.”

Corbin also praised his defense and offense, beginning with Joyce’s performance on the mound.

“We played solid defense. Mike Joyce on the mound got it done, got ahead of a lot of hitters,” Corbin said. “We had some timely hits, finally, that went our way. So all around, it’s be best game we’ve played all year.”

ASHLAND, Va. -- Atlee first baseman Aaron McKeever gets the bat around for a two-run double in the Raiders' 10-0 shutout over host Patrick Henry on Friday, May 14, 2021.

ASHLAND, Va. -- Atlee center fielder Miguel Montoya scores on a double by Aaron McKeever in the Raiders' 10-0 shutout over host Patrick Henry on Friday, May 14, 2021.