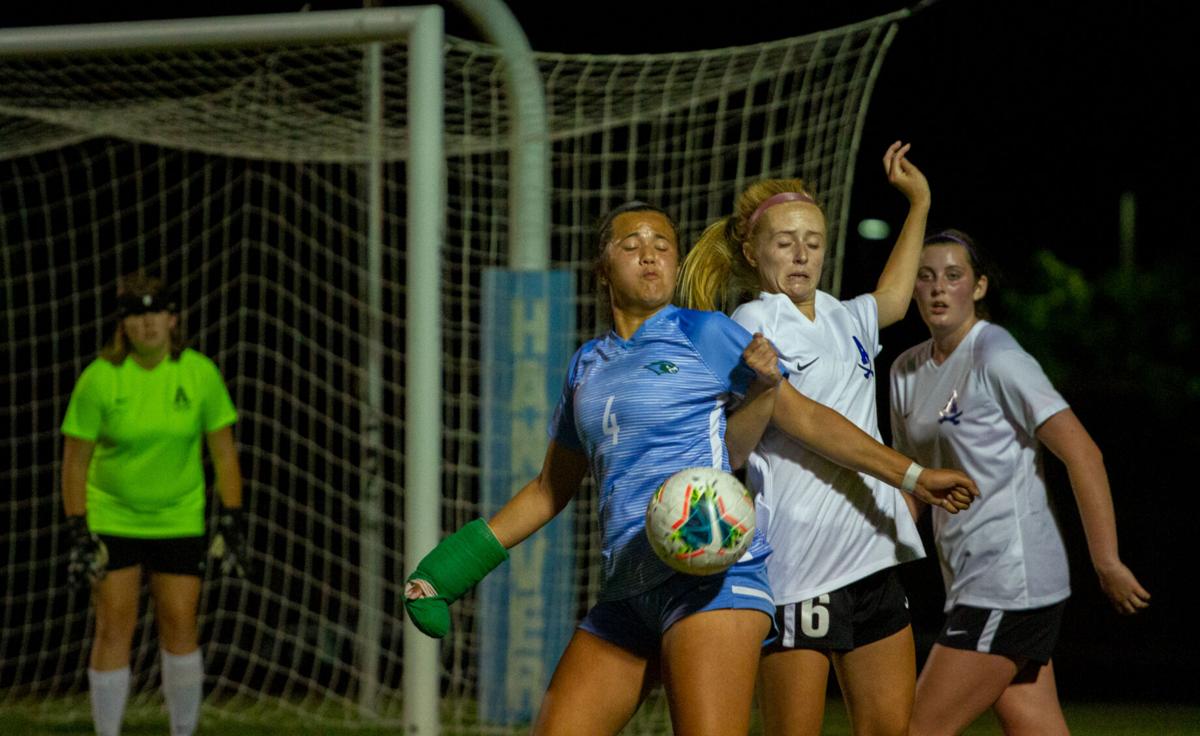 MECHANICSVILLE, Va. -- Hanover forward Ronin von Ofenheim (4) and Atlee midfielder Emily Neff (6) battle for the ball near the edge of the box as Raider goalkeeper Sarah Robinson (far left) keeps watch in the Hawks' 0-0 draw with visiting Atlee on Friday, May 21, 2021. 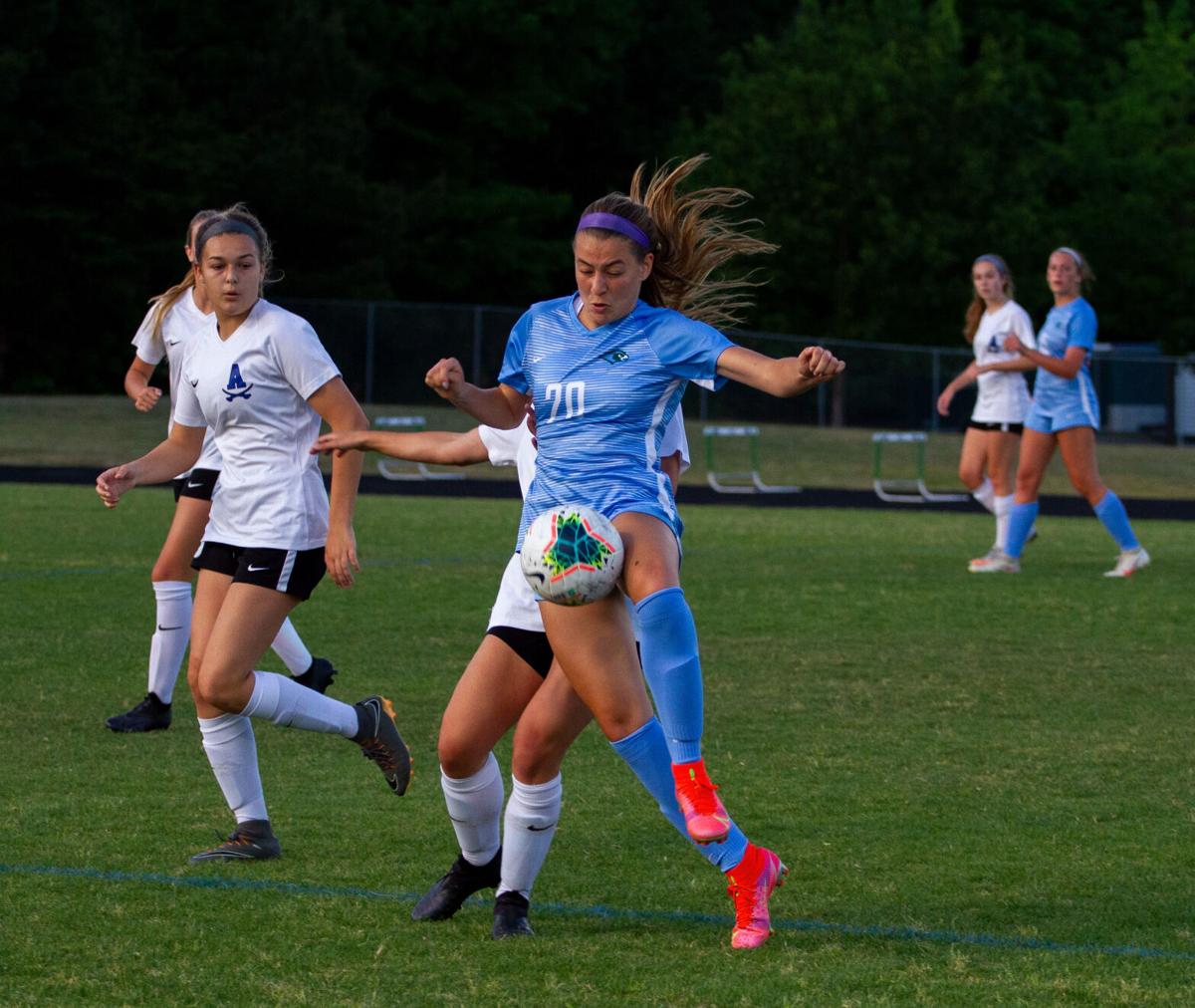 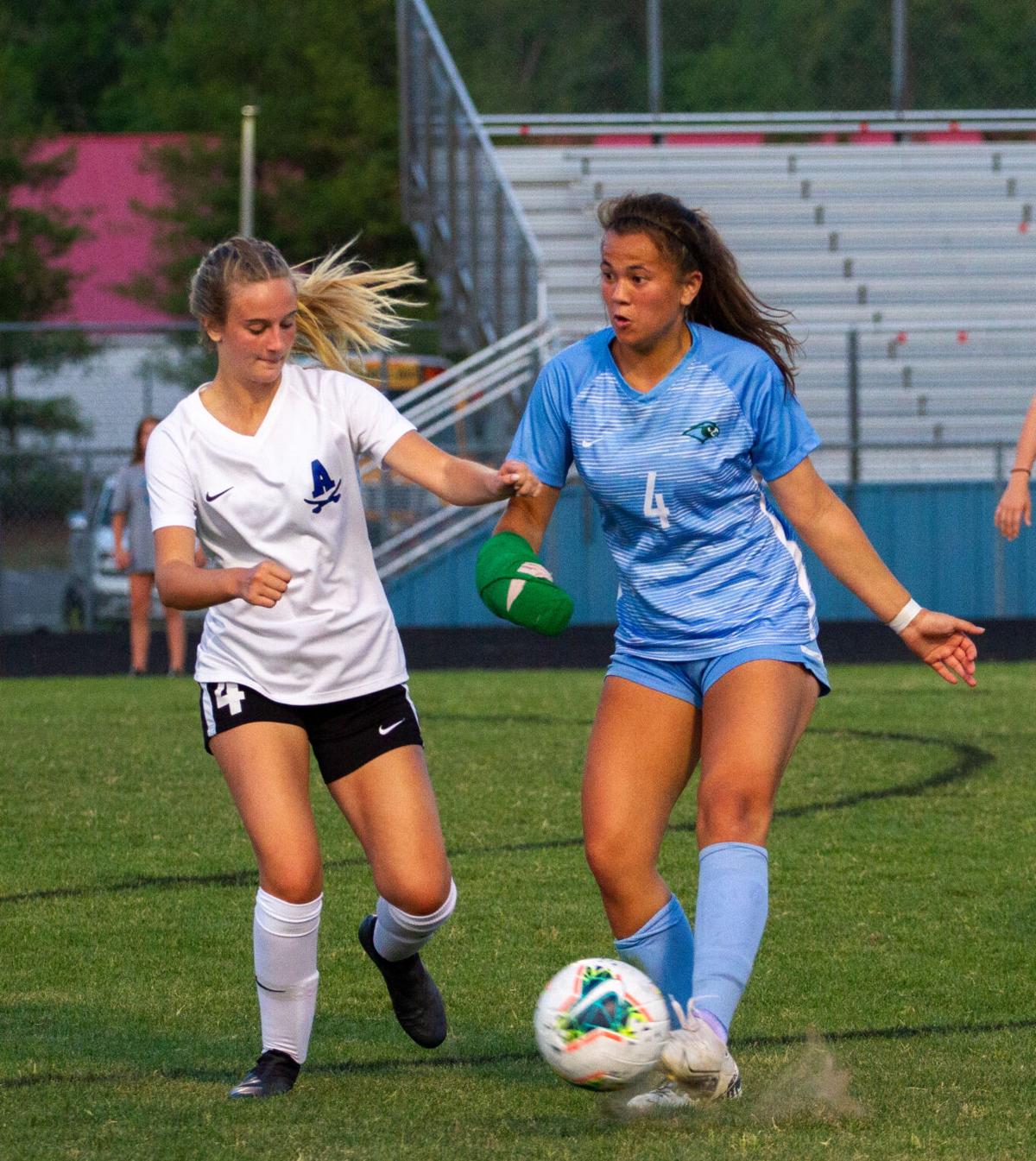 MECHANICSVILLE, Va. -- Hanover midfielder Ronin von Ofenheim gets a pass past Atlee midfielder Lauren Fescina in the Hawks' 0-0 draw with visiting Atlee on Friday, May 21, 2021. 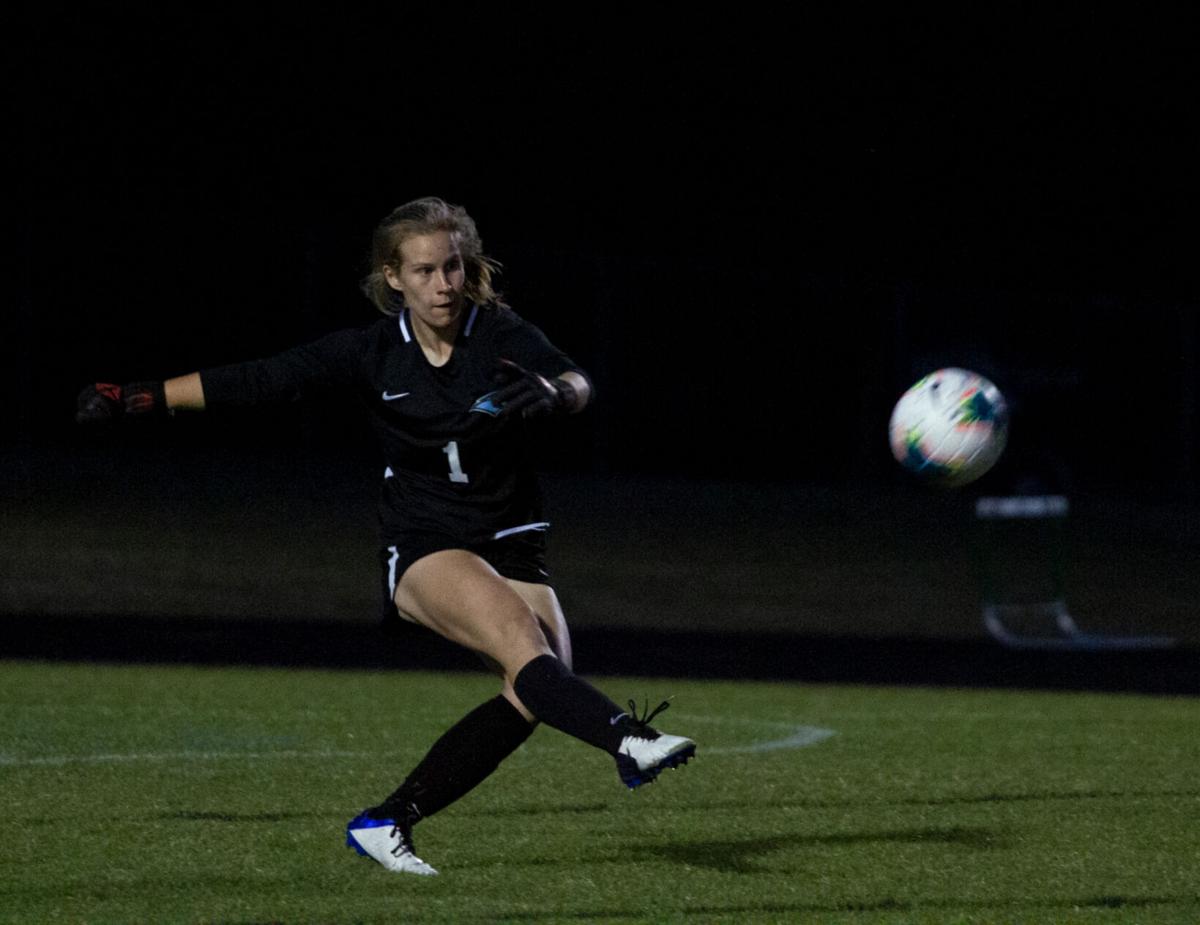 MECHANICSVILLE, Va. -- Hanover goalkeeper Tallulah Miller launches a goal kick in the Hawks' 0-0 draw with visiting Atlee on Friday, May 21, 2021.

MECHANICSVILLE – There may have been a dearth of goals in Atlee’s girls soccer fixture at Hanover Friday night, but there was no shortage of action, especially in front of each team’s respective goals.

Atlee’s freshman goalkeeper Sarah Robinson and Hanover’s senior goalkeeper Tallulah Miller proved the death knell for their respective opponents’ offenses – the teams totaled 24 shots between them – in a 0-0 draw.

By the time it was over, Robinson finished with 11 saves and Miller four.

“It was it was a pretty contested contest,” said Hanover head girls soccer coach Manny Tavares. “I think I think we had a better run of play but you know anyone could have said either way – but I I do feel we had the better run of play. We just couldn't finish. . . . If we had gotten more shots on target it might have been a little bit better.”

Atlee coach JoEllen Jacobs was proud of her team’s efforts.

“It was a good game. I’m proud of the girls, proud of the effort,” Jacobs said. “Sometimes it’s just hard to get that ball over the line.”

The defenses locked down like a vice in the box. Neither keeper shied away from onrushing attackers. They leapt, they dove, they scrambled on the ground when need be. And when they couldn’t quite get their hands on the ball, their back line stepped in, clearing ball after ball from the box.

Both teams also had their share of shots just off target.

“We were peppering them the first half pretty bad,” Tavares said. “Mainly we were just not even getting them on target.”

But some were on target, and there were plenty of balls that were near misses – even in the two five-minute overtime periods that followed regulation. Both teams had hard shots toward goal that went just a bit wide.

The action see-sawed throughout the night. Sometimes Hanover seemed in control, sometimes Atlee.

“We were dominant in certain parts of the game, but I think in the second half was it was even,” Tavares said. “Right in through overtime it was even. We might have had a slighter edge, but still, I would not call either side dominant.”

Tavares said both sides had their chances, but excitement may have prevented either team from making good on them.

“Where we faltered yesterday was, again, shots on target,” Tavares said. “I think the excitement of the game, and knowing that we were knocking on the door, we just couldn't get the more precise shots on goal.

“I feel that was a big factor in the game but it goes for both because I think we've all had chances and neither team scored. They were so wound up in the speed of the game. If they had slowed down a bit, you know, both sides could have capitalized on their chances.”

That excitement is what one should expect from the two rivals, Jacobs said.

“Every time we play them, it’s just a big rivalry – a good, hometown rivalry,” Jacobs said. “It’s fun to play them, and a challenge.”

MECHANICSVILLE, Va. -- Hanover forward Ronin von Ofenheim (4) and Atlee midfielder Emily Neff (6) battle for the ball near the edge of the box as Raider goalkeeper Sarah Robinson (far left) keeps watch in the Hawks' 0-0 draw with visiting Atlee on Friday, May 21, 2021.

MECHANICSVILLE, Va. -- Hanover midfielder Ronin von Ofenheim gets a pass past Atlee midfielder Lauren Fescina in the Hawks' 0-0 draw with visiting Atlee on Friday, May 21, 2021.

MECHANICSVILLE, Va. -- Hanover goalkeeper Tallulah Miller launches a goal kick in the Hawks' 0-0 draw with visiting Atlee on Friday, May 21, 2021.