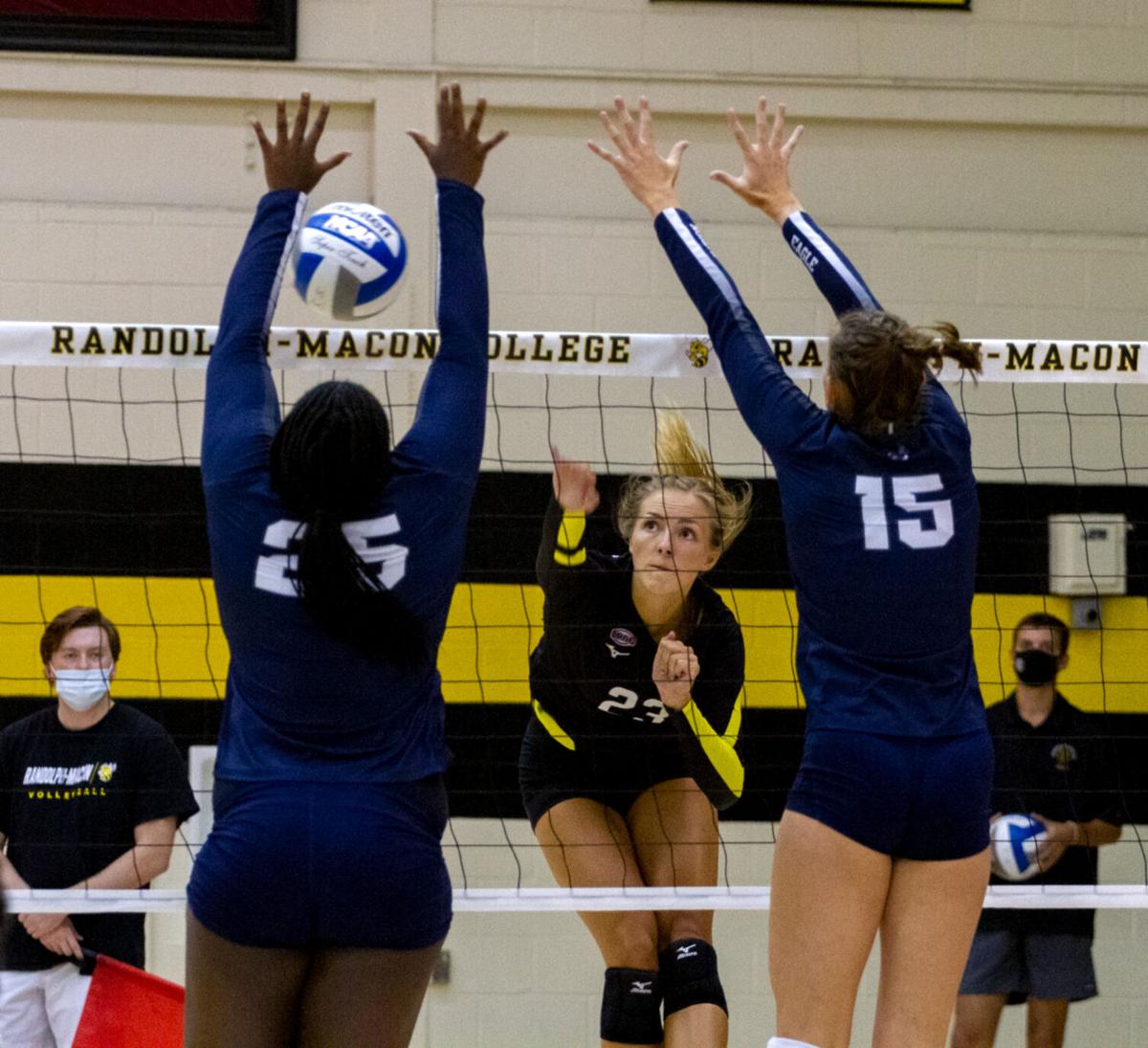 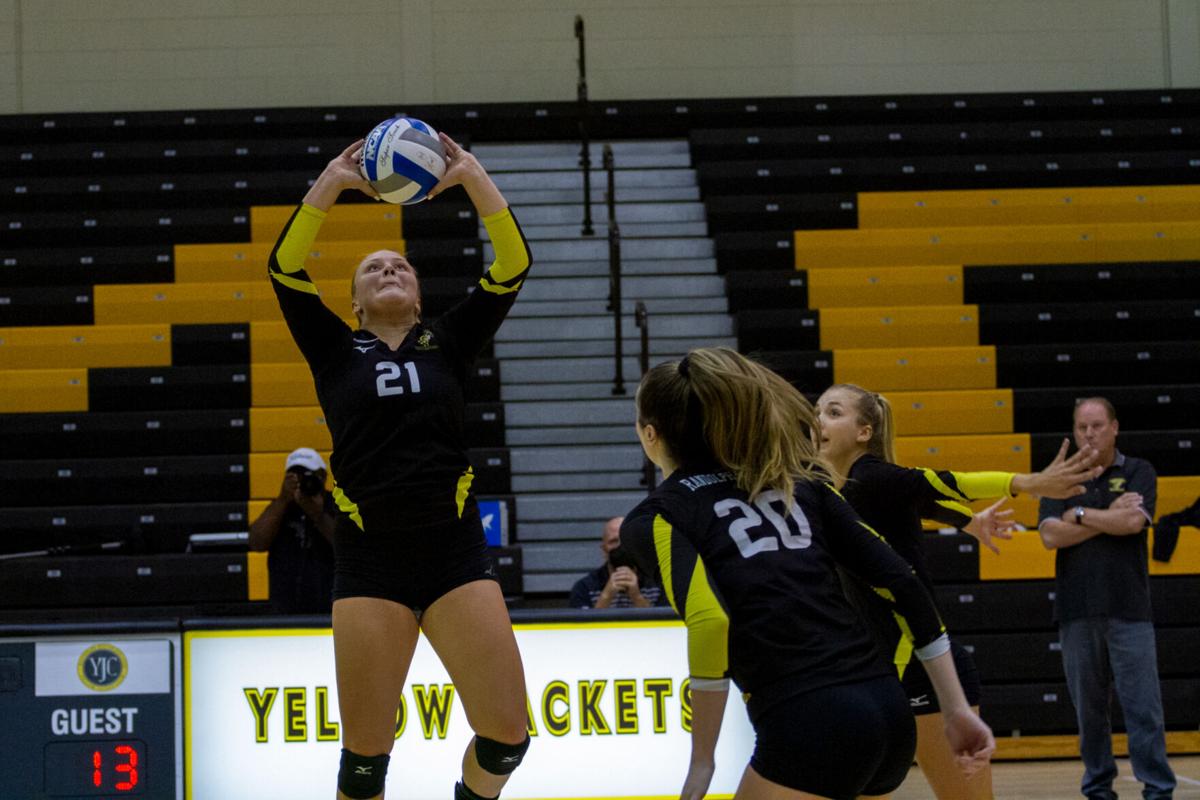 By Rob Witham for The Local

The Yellow Jackets managed to complete a 13-game season in the early spring, finishing sixth in the Old Dominion Athletic Conference and placing runner-up in the conference tournament to Washington and Lee. Meanwhile, the Eagles took the court for their first competitive match in nearly 22 months.

It would be Randolph-Macon who picked up where they left off, storming through the first two sets with offensive precision at midseason form as the Yellow Jackets swept the Eagles 25-15, 25-13, 25-22.

The second set was highlighted by a service run from Warlick, turning a 2-2 tie into a blistering 10-2 advantage, as Koch and company turned in a .400 kill percentage.

“Our biggest thing was staying consistent,” Koch said. “There were a lot of nerves. We have five new freshmen, so we looked to stay calm and build on that.”

The Eagles, who played several freshmen during the match, began to find their stride in set three, matching the Yellow Jackets point for point, leading 15-14 before an attack error by Caitlyn Burch gave Yellow Jacket freshman Laura Walton a chance to use an impressive service to score the next four points, prompting a Mary Washington timeout and giving Randolph-Macon the lead for good.

“I think our defense, our serve-receive is top notch,” noted Macguire Gubba, who had 33 assists for the Yellow Jackets. “If I can give the hitters just a decent ball, they can find the floor.”

Randolph-Macon committed just two attack errors in the first two sets, committing six in the third, but offsetting that with a 15-kill performance. Danielle LaRosa had eight kills, while Ashlynn Knott added four and Gubba three.

As usual, head coach Bill Rogers has created a challenging schedule for his team as they attempt to return to the top of the conference. The last time the Yellow Jackets won the ODAC Tournament championship was 2017, but earned an at-large bid to the NCAA Championship in their last full season of 2019 after winning the conference’s regular season crown.

The Yellow Jackets hit the road to Huntingdon, Pennsylvania, to face Juniata, Franklin and Marshall, and Arcadia at the ASICS Invitational this Friday and Saturday before beginning conference play at Hollins on Wednesday, Sept. 15. They’ll return to Crenshaw a week later to welcome Shenandoah.

“It’s going to be a long three weeks, but having the upperclassmen stay positive, and let that feed down to the underclassmen. I have full confidence in them,” Gubba said.

Back-to-school numbers do tell a story

The Mechanicville Local Obituaries week of 9/22/21

BARNES, Janie Dunn, 75, of Mechanicsville, went to be with the Lord Friday, September 10, 2021. She was preceded in death by her son, Bubba Ra…

Hanover County continues its 300th anniversary celebration this weekend with Hanover AutumnFest at Hanover Tavern from 10 a.m to 3 p.m. this S…

The Mechanicsville Local Calendar of events week of 9/22/21

On any given Saturday evening traveling down Route 301 in Hanover County, it’s hard to predict how many or what kind of vintage vehicles you m…

AYERS, Serita, 57, of Mechanicsville, went to be with the Lord Wednesday, September 8, 2021. She is survived by her husband, Carl; two daughte…

The Mechanicsville Local Obituaries - Week of 9/8/21

Board moves forward with broadband initiative

With a quickly approaching deadline, Hanover officials are considering partnering with two companies to complete an application for Virginia T…

GLEN ALLEN – One could make a lot of money selling the close shave at the finish of the Hanover County Quad Wednesday.