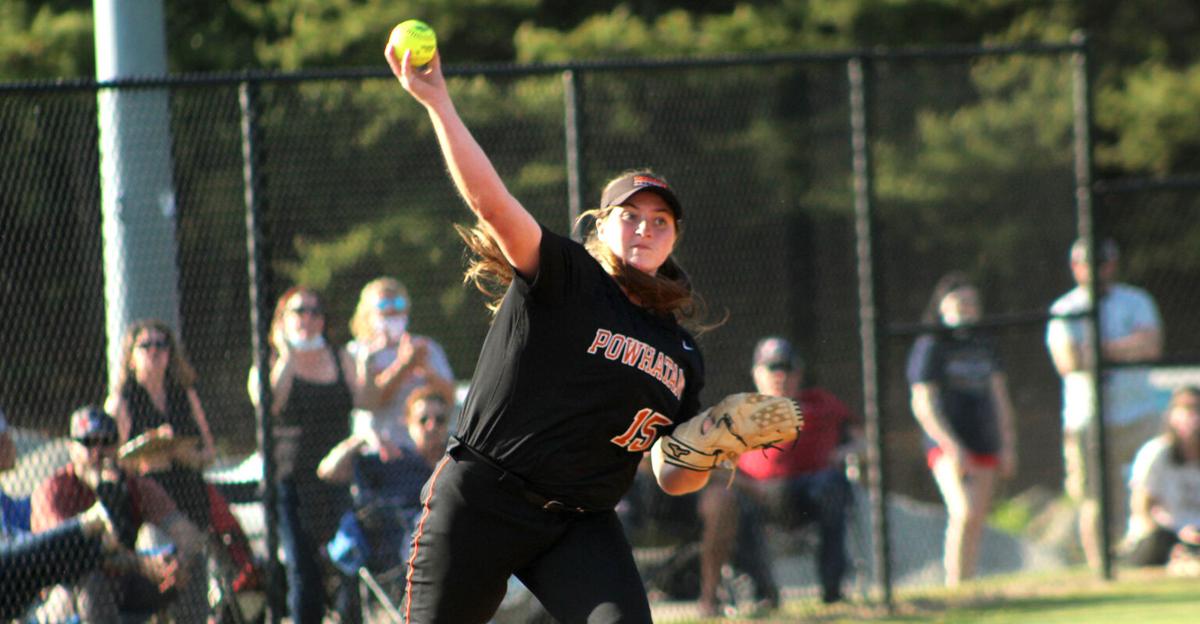 Powhatan High School senior Autumn McMillen from third base attempts to throw out a runner headed to first in Powhatan varsity softball's 2021 season opener at home versus Cosby on April 27, 2021. 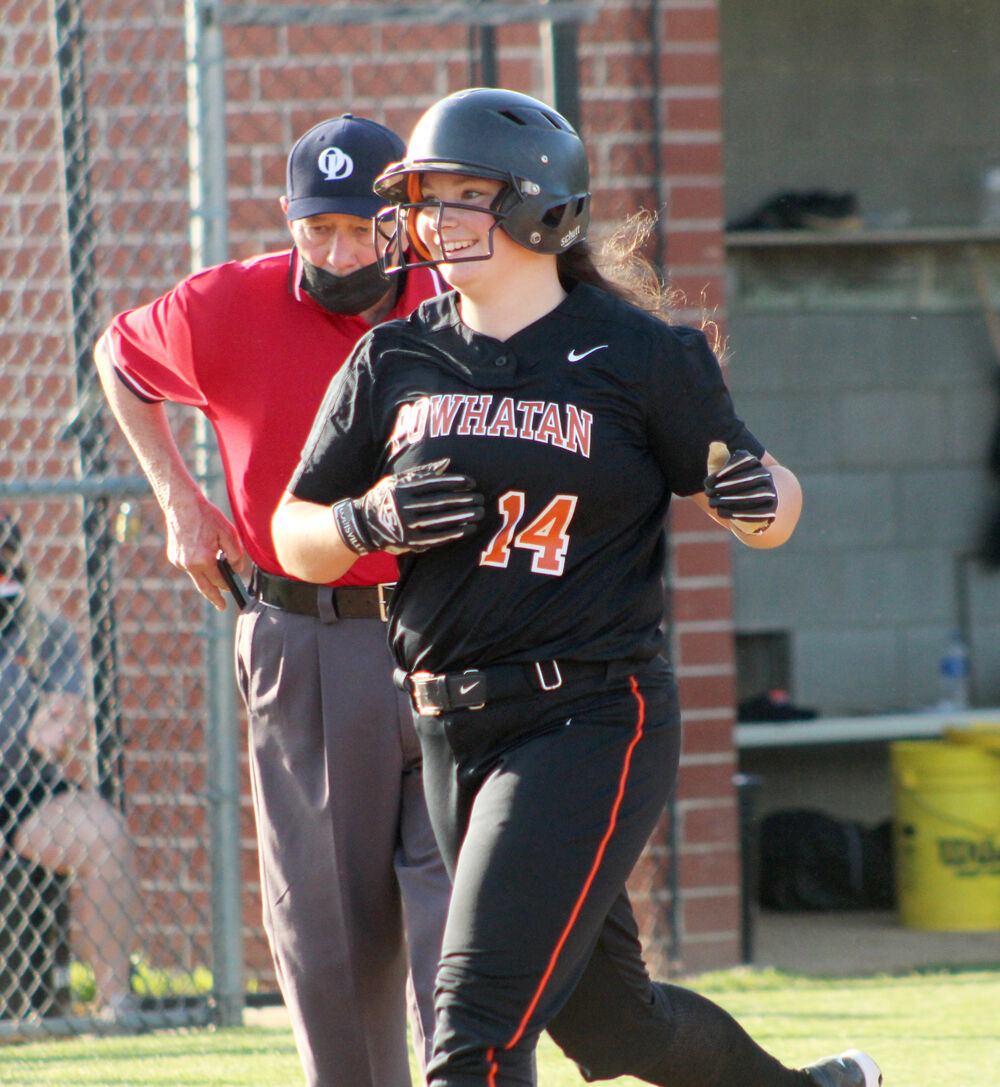 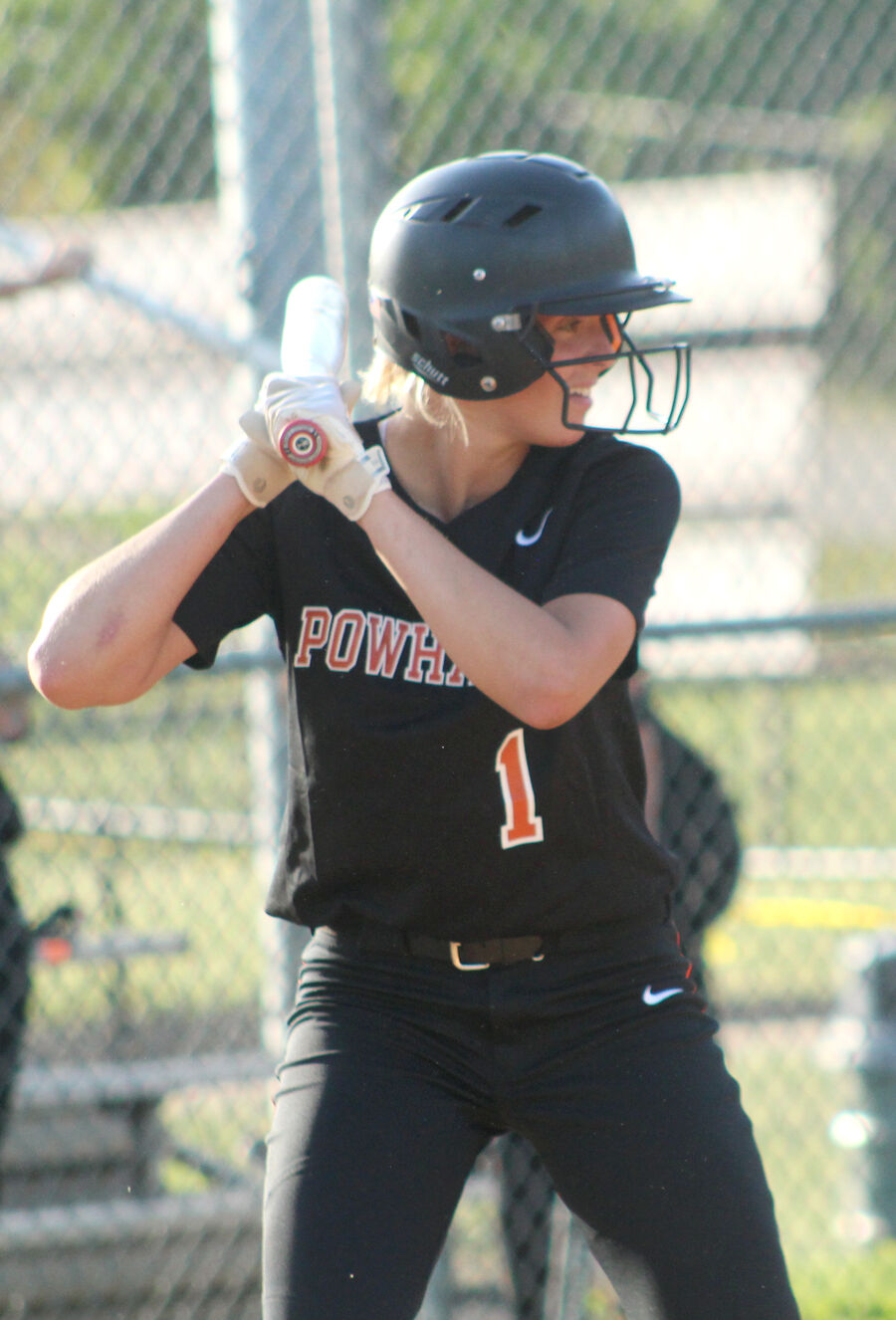 Powhatan High School senior Sarah English lines up for her first at-bat of the season in Powhatan varsity softball's 2021 season opener at home versus Cosby on April 27, 2021. 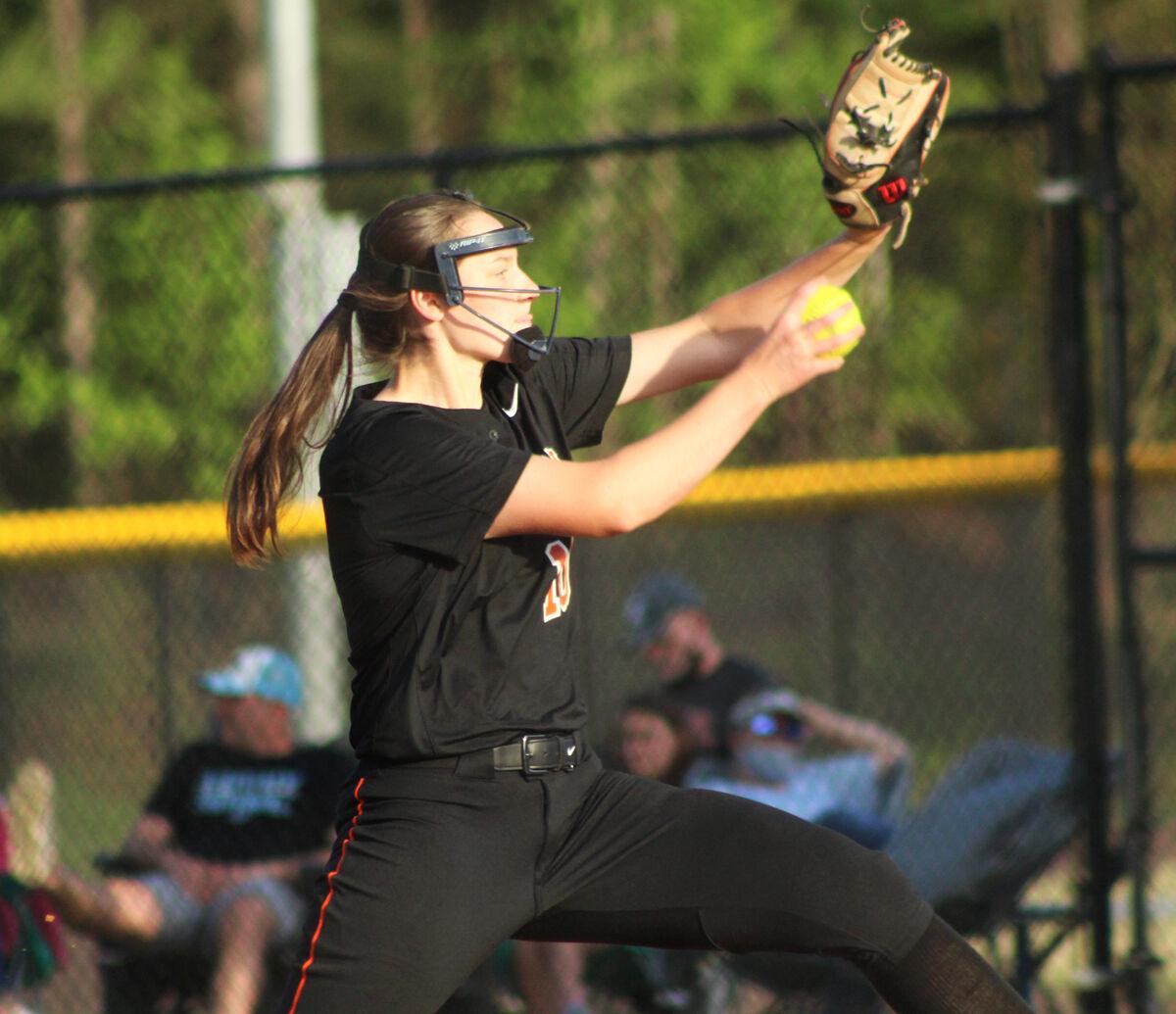 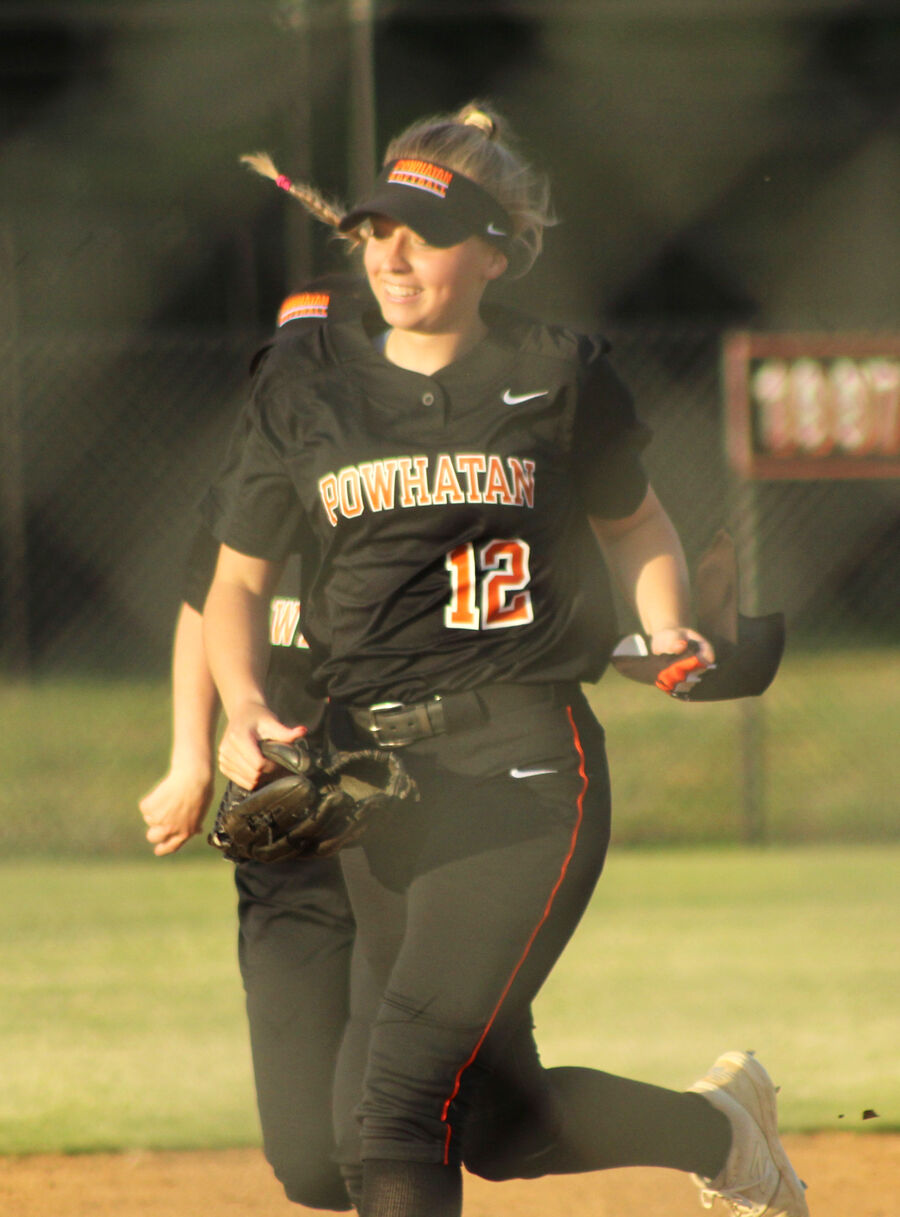 POWHATAN -- After the entire 2020 regular season was cancelled by the onset of the COVID-19 pandemic, seven Powhatan High school seniors are embracing the opportunity to play their final varsity season on the softball diamond with the return of spring sports in 2021.

“That gives us a lot of leadership, a lot of experience,” said Powhatan head coach Marie Crump. “However… a lot of those players are playing at different positions – just because of personnel – different positions than they’ve played in the past, so we’re going to have to work through the kinks there and get them feeling more comfortable in the role that they’re playing.”

Barton, English, Davis, Lawson and Ratliff all contributed to Powhatan’s young 2019 team achieving a final record of 15-6 and reaching the regional semifinals. For McMillen and Osterman, this is their first regular season of varsity after 2020 spring sports were wiped out. McMillen, who had put together two strong scrimmages last year, immediately made her presence known in this year’s season opener on April 27 by locking down Cosby’s offense in the first inning from third base.

In her first at-bat of the season, Davis – who along with English factored into a powerful middle of the batting order in 2019 – clocked a two-run home run over the left field fence against the Titans, with the ball landing on top of the batting cage.

English opened the season batting No. 4 in the lineup, and she returns as one of Powhatan’s primary pitchers for the season. She is joined by freshman Madalyn Johnson, who pitched four scoreless innings against Cosby.

Powhatan’s juniors include Payton George, Carsen Hogston, Emma Phillips and returning players Joy and Savannah Johnson. Both Savannah and Joy were part of Powhatan’s 15-6 season in 2019 as freshmen.

In the 2021 opener, Savannah made a huge running catch deep in right field in the fifth inning versus Cosby, and she ran down another flyball from right field to center in the sixth.

Also getting hits for Powhatan on April 27 were Barton, Savannah, McMillen and English. Barton slapped a shallow grounder up the middle for a single, then scored off of Davis' homer in the first inning. In the fifth inning, Johnson laced a single into center field, and then McMillen, quickly shifting out of a bunting stance, slammed a line-drive single into center for a single.

With Johnson looking to score from third, Ratliff was able to load the bases on the bunt against one out, but Cosby got out of the inning on another strikeout and a flyout.

English in the sixth hit a groundball single up the middle, and she appeared to score when Savannah appeared to hit a tying double into left field, but officials ruled the ball foul.

Cosby narrowly led Powhatan 3-2 until the top of the seventh, when Taylor Norton’s two-run double sparked a four-run frame for the Titans. Cosby sealed the 7-2 win in the bottom of the frame.

Powhatan will look to bounce back today on the road with today's game at L.C. Bird at 5 p.m.

“It’s just great to be back on the field again this year,” Crump said. “We want to be able to take advantage of this opportunity that we lost last year."

Powhatan Board of Supervisors holds public hearing on budget

This story has been updated to include information about a petition that was started in response to one board member's comments during the meeting.

Powhatan High School senior Autumn McMillen from third base attempts to throw out a runner headed to first in Powhatan varsity softball's 2021 season opener at home versus Cosby on April 27, 2021.

Powhatan High School senior Sarah English lines up for her first at-bat of the season in Powhatan varsity softball's 2021 season opener at home versus Cosby on April 27, 2021.