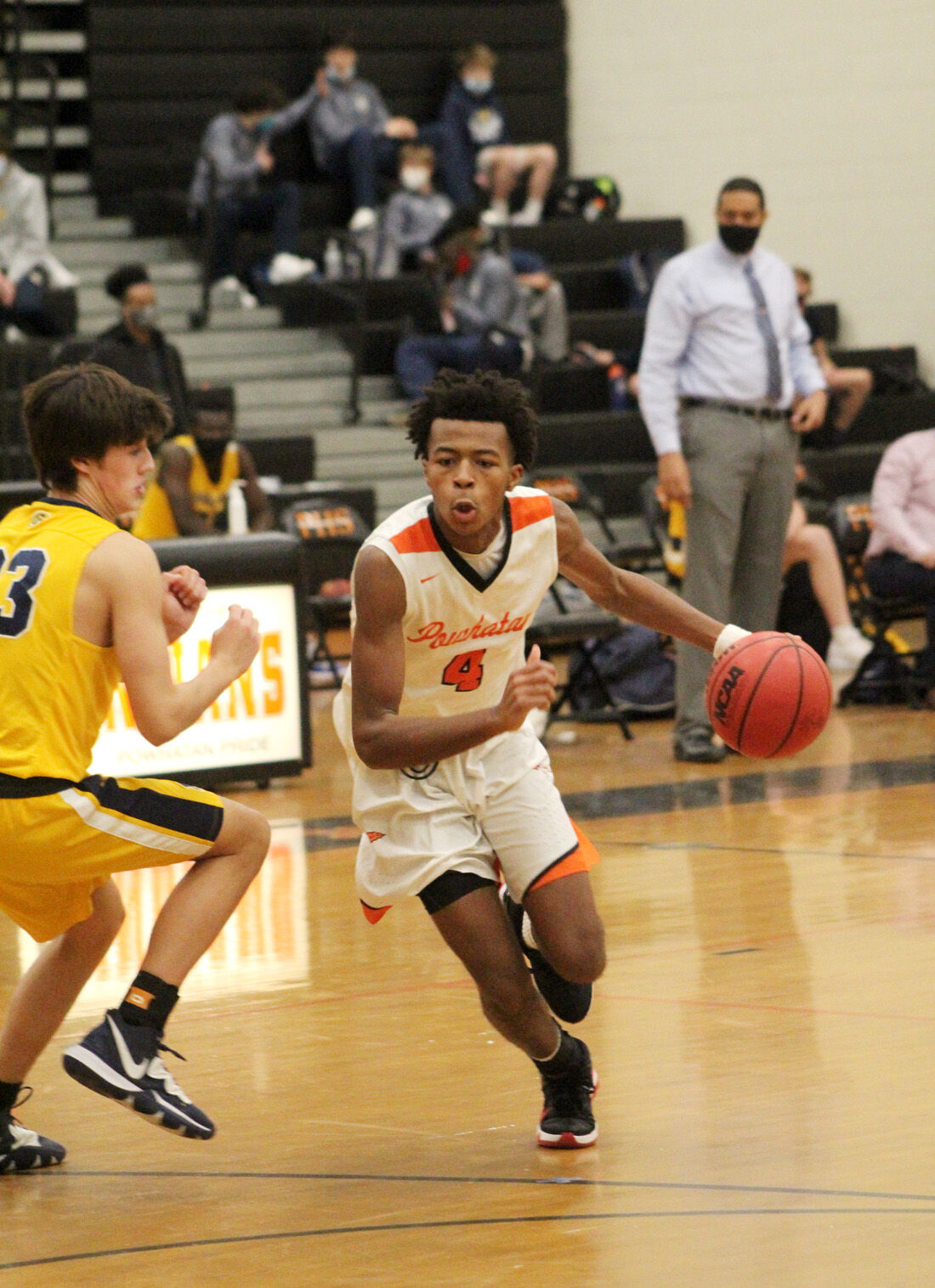 Powhatan senior L.J. Alston drives to the basket in the second half of Powhatan's home game versus Midlothian on Jan. 13, 2021. 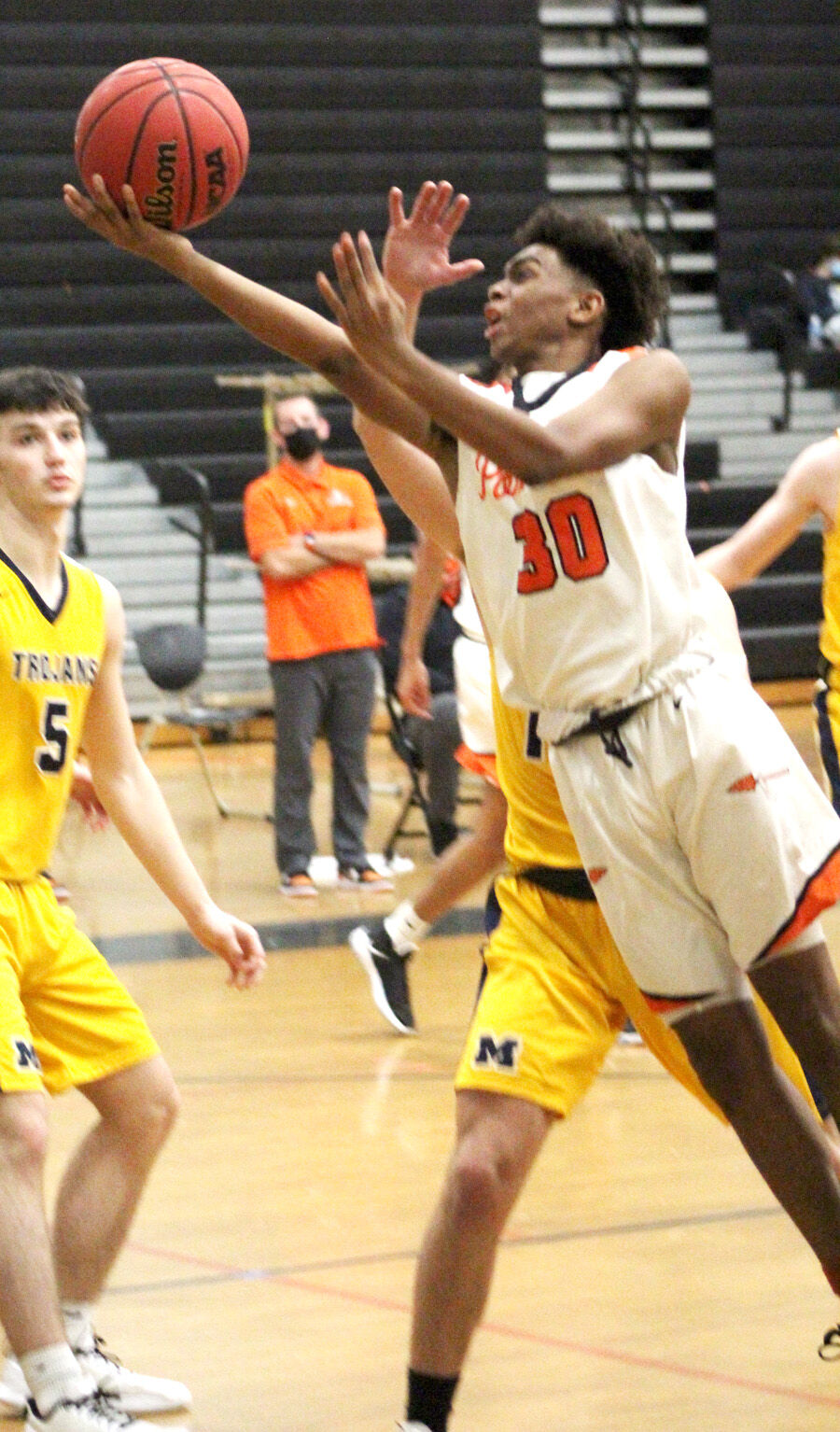 Powhatan junior Matthew Hempfield drives to the net for a layup in Powhatan's home game versus Midlothian on Jan. 13, 2021.

Powhatan senior Brylan Rather leaps up for an attempted layup in the post in Powhatan's home game versus Midlothian on Jan. 13, 2021. 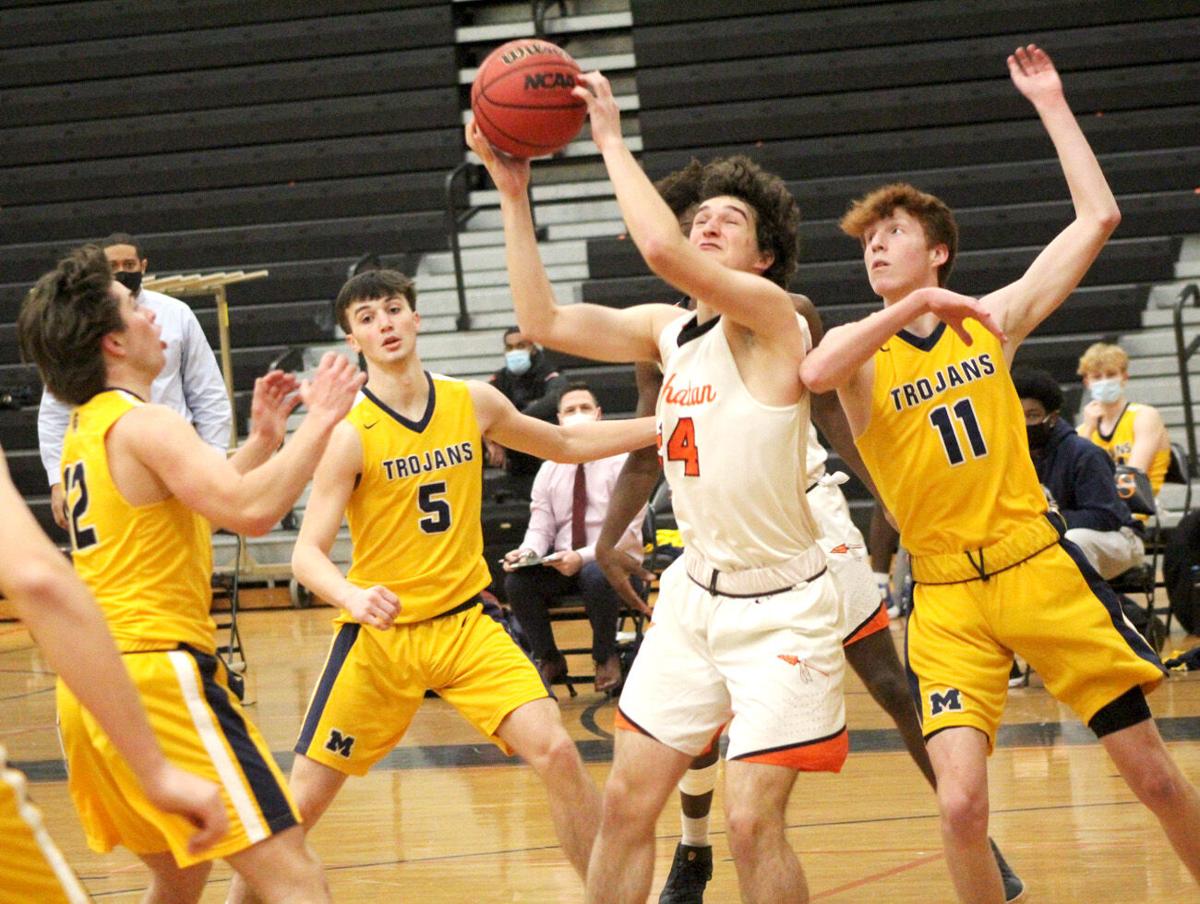 "A lot of those guys have been playing varsity for three years and learning the same system for three years," Powhatan head coach Ryan Marable said of Midlothian's players. "Really all I cared about tonight was our effort and our enthusiasm, which - that's been lacking in the last three games - and we got there tonight, but then, when it came time to make basketball plays...inexperience kind of reared its ugly head, and against a team like that who is really dedicated to the system...if one person doesn't do their job, then they're going to find that person and they're going to make you pay.

"That happened a lot in a lot of possessions, and it just comes with experience, comes with communication and being able to not take plays off."

Despite the loss, Powhatan showed strong pressure at times in Wednesday's game, applying the full-court press and forcing some mistakes and turnovers. In the third quarter, senior Aaron Nash grabbed a loose ball that was freed from Midlothian's possession by pressure from Nash's teammate Ethan Dowdy, and Brylan Rather put the exclamation mark on Powhatan's possession by hitting the layup off of a spin move down low. In the same quarter, senior JaySun Carroll reached skyward and got his hand on a ball put into motion by Midlothian and deflected it into the upwards-reaching arms of Alston. The ball from there went to Hempfield, who flipped the layup through the hoop while dashing through the lane and then crashing to the ground, but not before drawing the foul to give himself the and-one try from the free-throw line.

Powhatan (1-4) has had a tough stretch since its narrow loss to Clover Hill last Friday, but for Marable and the team, there were still pros to take away from the two games prior to Wednesday. In Saturday's 81-47 defeat to L.C. Bird, Powhatan outscored the Skyhawks 13-12 in the third quarter, and Marable noted that the Skyhawks "don't let up - they don't stop playing." The Indians were also winning Monday's game 23-22 against Monacan before the Chiefs overtook them 64-46.

"Those are those little wins that a young program wants," Marable said. "Hopefully the guys can take that and use that as motivation like, 'Hey, we can hang with anybody...as long as our energy and our effort is there.

"But, just like in anything in life, and especially with these young kids, nobody's going to be successful if they don't have sustained effort," Marable said. "You can't just bring effort when you want to. It has to be an every-day, every-play thing, and unfortunately we don't have that mentality right now, but hopefully we get it soon. I'm not going to let them take plays off and not demand that sustained effort, because I'd be letting them down as kids and as players if I just let them be okay with that. I demand that, and hopefully it'll rub off in their lives after basketball, but hopefully it'll pay dividends as we continue with our season."

Powhatan will play at James River on Friday at 7:15 p.m.

Terry, Henderson score 13 each in Powhatan's 49-40 setback to James River

POWHATAN – Powhatan kept the game close going into the third quarter, trailing 23-21 at the half, but the visiting James River Rapids slowly p…

Powhatan senior L.J. Alston drives to the basket in the second half of Powhatan's home game versus Midlothian on Jan. 13, 2021.

Powhatan junior Matthew Hempfield drives to the net for a layup in Powhatan's home game versus Midlothian on Jan. 13, 2021.

Powhatan senior Brylan Rather leaps up for an attempted layup in the post in Powhatan's home game versus Midlothian on Jan. 13, 2021.