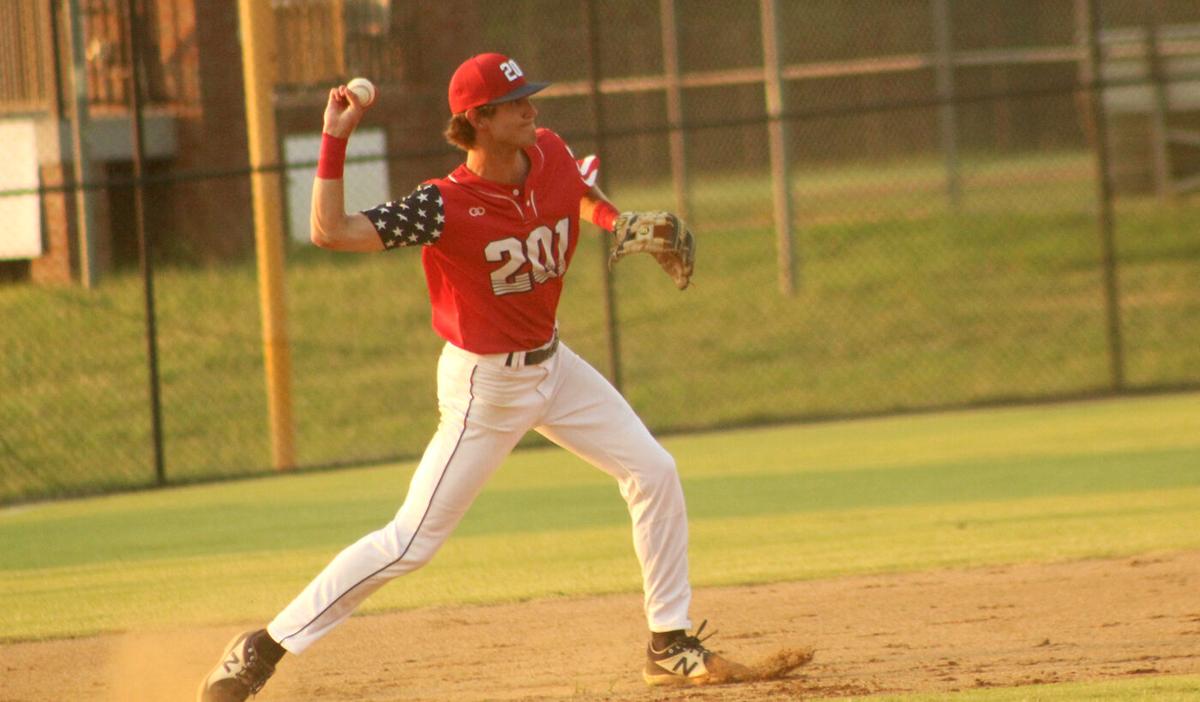 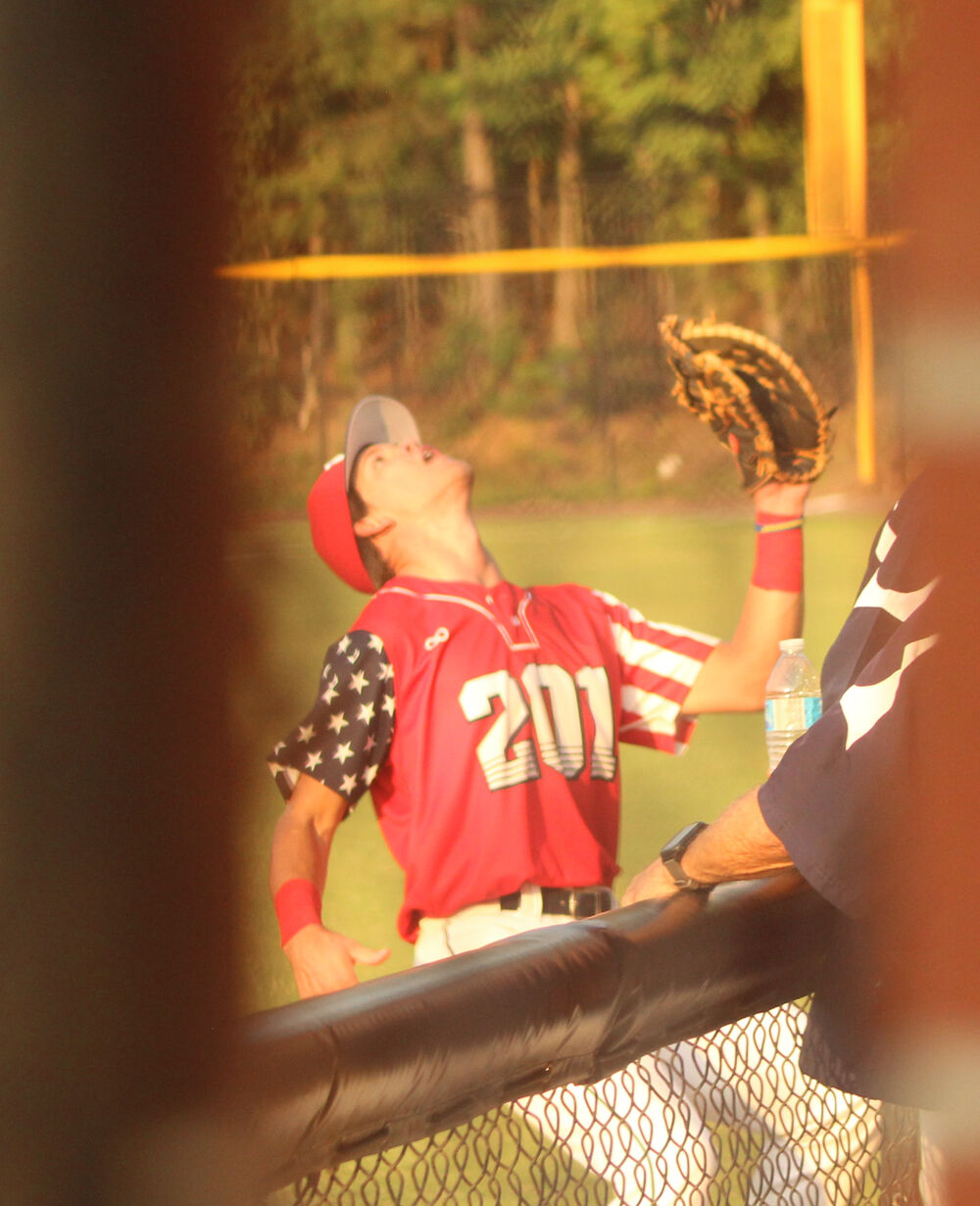 American Legion Post 201's Christian Chambers tracks down a flyball deep in foul territory for an out in a Seniors baseball home game versus Post 284 at Powhatan High School on July 6, 2021. 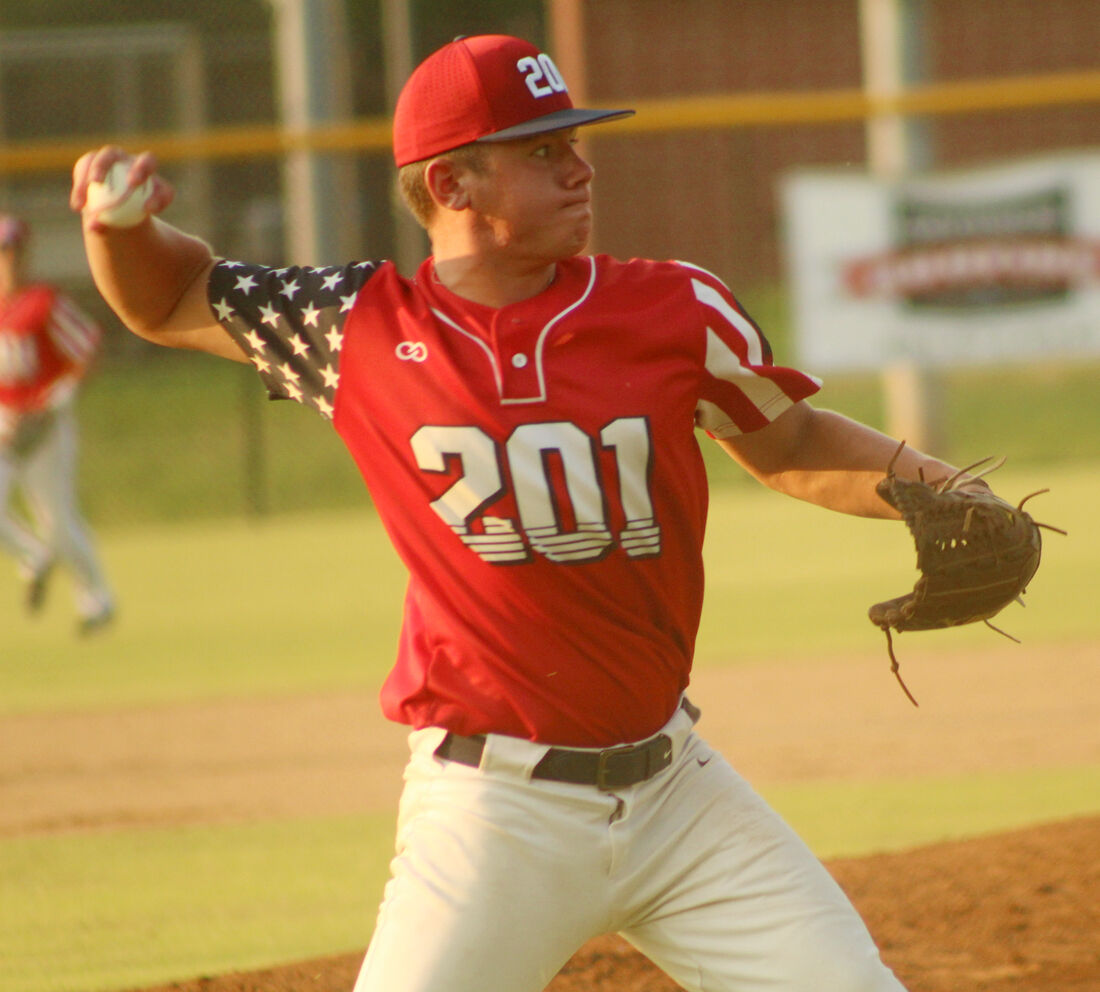 American Legion Post 201's starting pitcher Stone Talley throws out a runner headed to first base on a 1-3 play in a Seniors baseball home game versus Post 284 at Powhatan High School on July 6, 2021.

POWHATAN -- Bouncing back from a 6-1 deficit, the American Legion Post 201 Seniors homered twice in the sixth inning to tie Tuesday's game and force extra innings, but the Post 284 Bucs pulled away in the ninth and held on to win 12-9.

"We've got to mesh as a baseball team, and that's always tough in American Legion because you've got so many players coming from different organizations," said Post 201 head coach Eric Mead. "We're still in this; we've got some really good talent on the field, and we're starting some really good college baseball players...we've got to play at that college level."

Post 284 seized a 4-run lead after the first inning and went up 6-0 after three-and-a-half frames, but Post 201 began chipping back, loading the bases twice in the third and fourth innings until breaking through in the fourth with Dawson pushing Carris across the plate on a groundball and a miscue by Post 284's third baseman.

Post 201's defense settled in after the first inning, with Lovasz at third base sparking two 5-4-3 plays: one involving starting second baseman Jacob Barbour and first baseman Christian Chambers in the second inning, and one involving Talley when he moved to second and Chambers at first in the sixth. On that sixth-inning double play, Lovasz snatched up what was a hard-hit grounder by talented Thomas Dale alum Johnny Oates. Talley also held Oates at bay in the second inning when he forced him into a flyout to center field on a 3-2, 2-out pitch.

201's defensive momentum ultimately transferred to the offense in the sixth, when Lovasz caught hold of the first pitch thrown to him and smashed it over the right-center fence, slashing 284's lead to 6-4.

Ethan Smith followed up Lovasz' 3-run homer by lasering a high 2-2 pitch into shallow left field to reach base. Talley then golfed a 2-run home run over the left-center fence to plate both Smith and himself and make it a new ballgame at 6-6.

Both teams scored a run in the eighth, in which each team started with a runner on second base when up to bat, but 284 scored five runs in the top of the ninth. Evan Hornsby punctuated the half-inning for the Bucs with a 2-run double to right field.

Post 201 still gave itself a chance to turn things around, loading the bases and scoring two runs on a walk from Ashton Tingle and a fielder's choice by Dawson. But with two runners on base against two outs, the tying run at the plate struck out, and 284 held on for the 12-9 win.

"I believe in this group; I really believe that we're going to get there," Mead said Tuesday. "We've been in every game we've played - we just don't play the whole game, just like tonight. We sat for three innings and then got hot for three and then sat a little bit at the end. We just can't do that - and we're still moving players around...this is only our third game, so we're trying to get the combination in our batting order right. That's going to take a game or two more, but we're getting pretty close with that.

"I think we're starting to see some combinations where we're starting to get some runs; we're still leaving runners on third base way too much with less than two outs," said Mead, who also pointed to the importance of doing the little things, from the players laying down bunts when they're supposed to, to getting the outs that are given to them.

"I believe in this group; it's a really good group of baseball players with a lot of, lot of talent," Mead said. "We've just got to come together as a team and start playing. I expect it to happen. I know it will."

Post 201 will look to break though for its first victory of the 2021 season at home versus Post 125. While the game is currently scheduled for Thursday at 7 p.m., it could be moved up to tonight due to the weather forecast for tomorrow. For scheduling updates, check American Legion Post 201's Facebook page (https://www.facebook.com/PowhatanPost201Baseball).

American Legion Post 201's Christian Chambers tracks down a flyball deep in foul territory for an out in a Seniors baseball home game versus Post 284 at Powhatan High School on July 6, 2021.

American Legion Post 201's starting pitcher Stone Talley throws out a runner headed to first base on a 1-3 play in a Seniors baseball home game versus Post 284 at Powhatan High School on July 6, 2021.