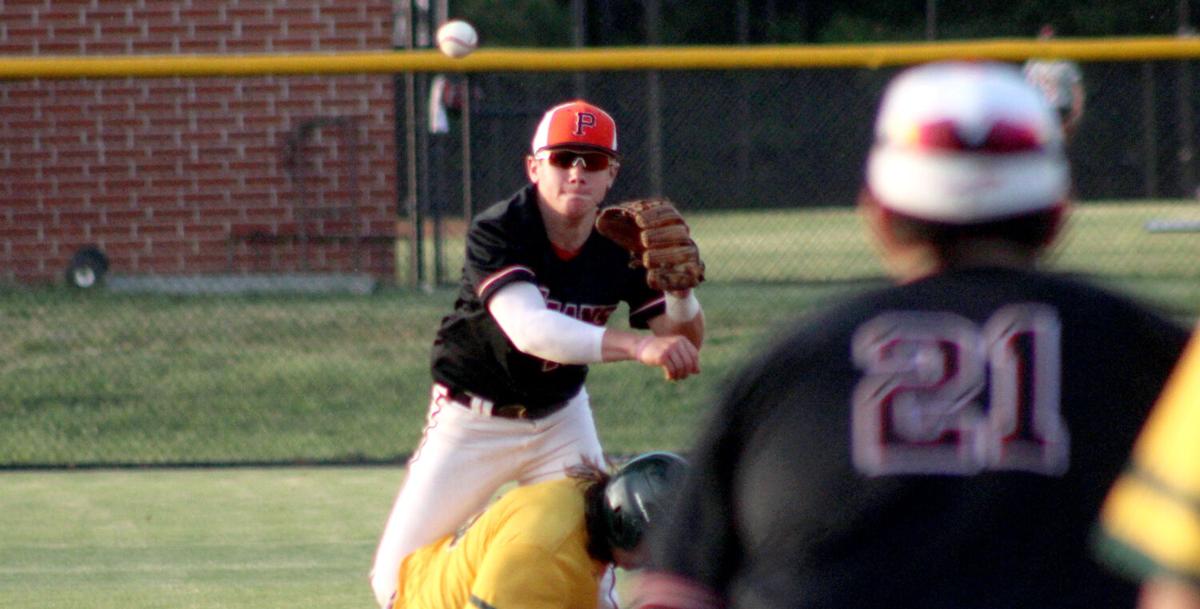 Powhatan High School senior Stone Talley, after securing an out at second base, throws the ball to teammate Chase Gayness (21) for an attempted out at first in a varsity baseball home game versus Clover Hill on May 4, 2021. 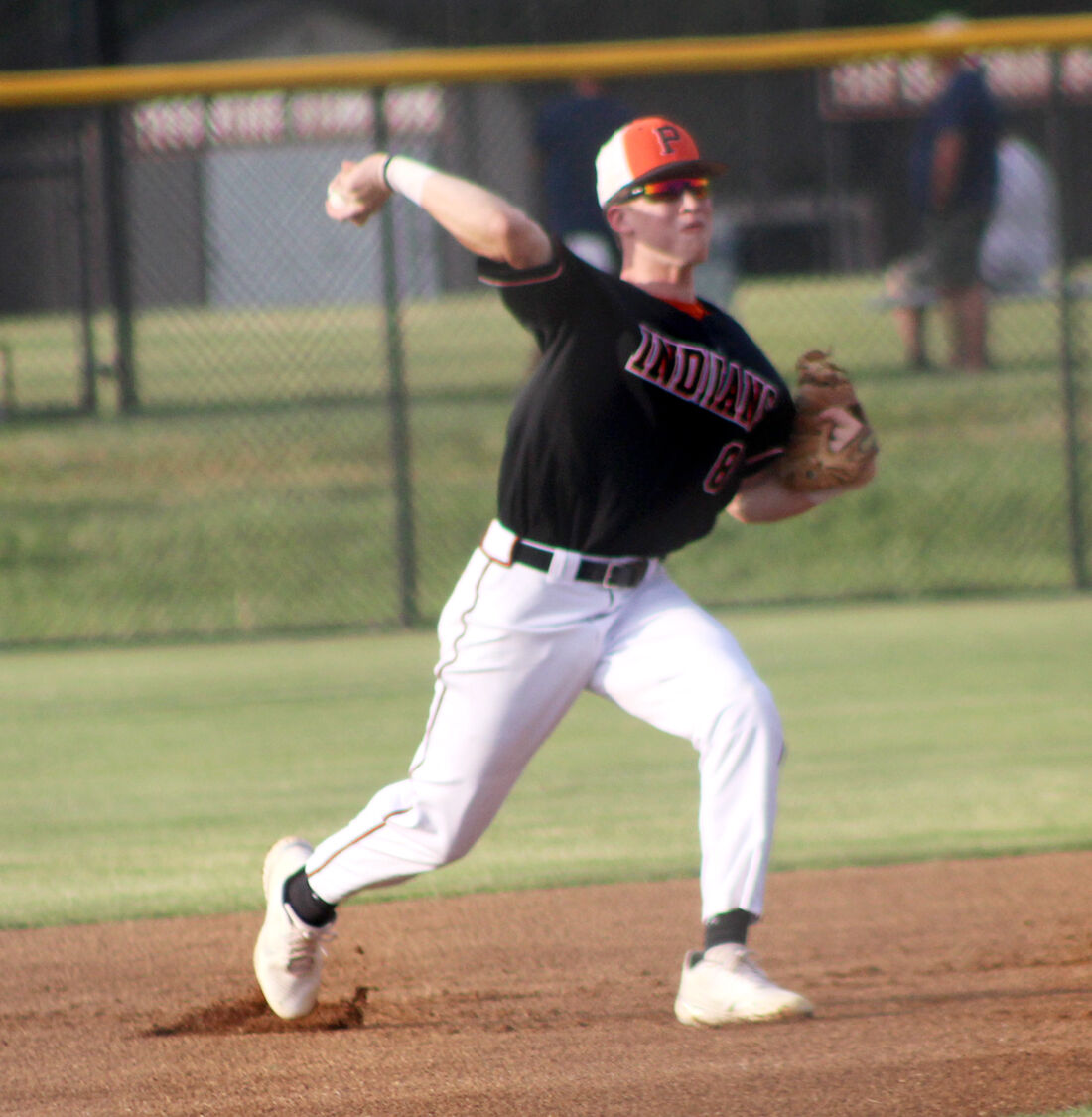 Powhatan High School senior Connor Woodel initiates a 5-3 play from third base in a varsity baseball home game versus Clover Hill on May 4, 2021. 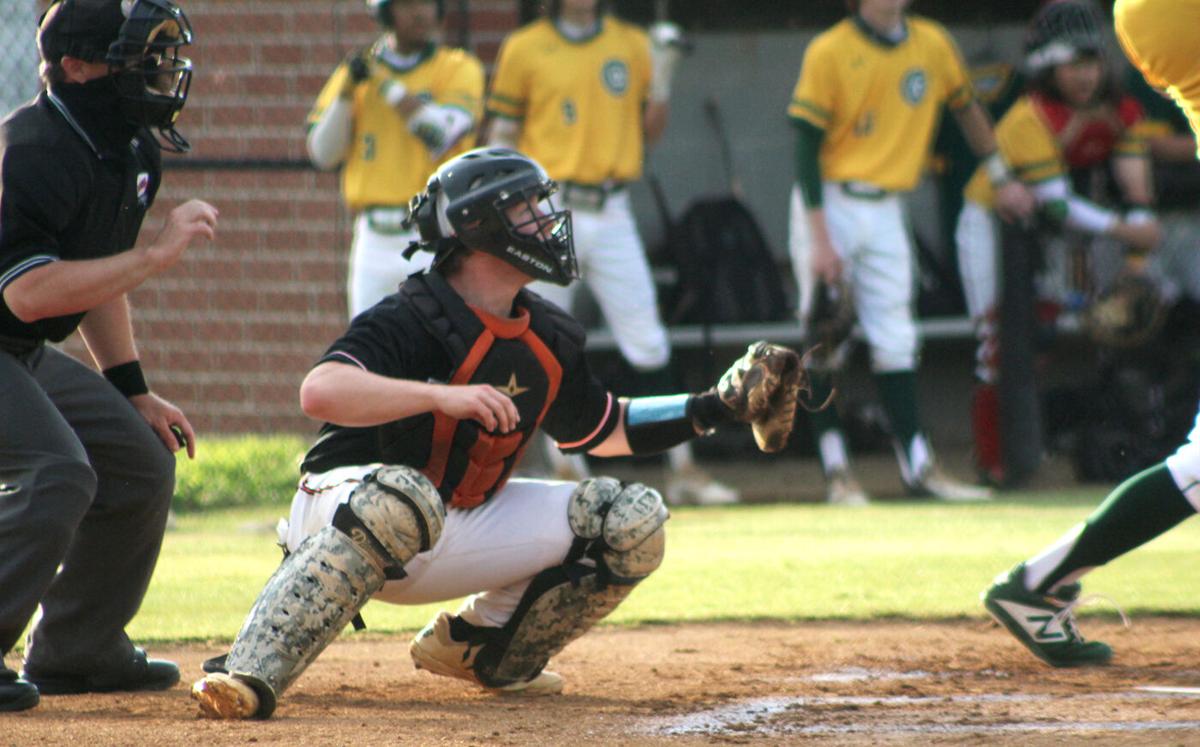 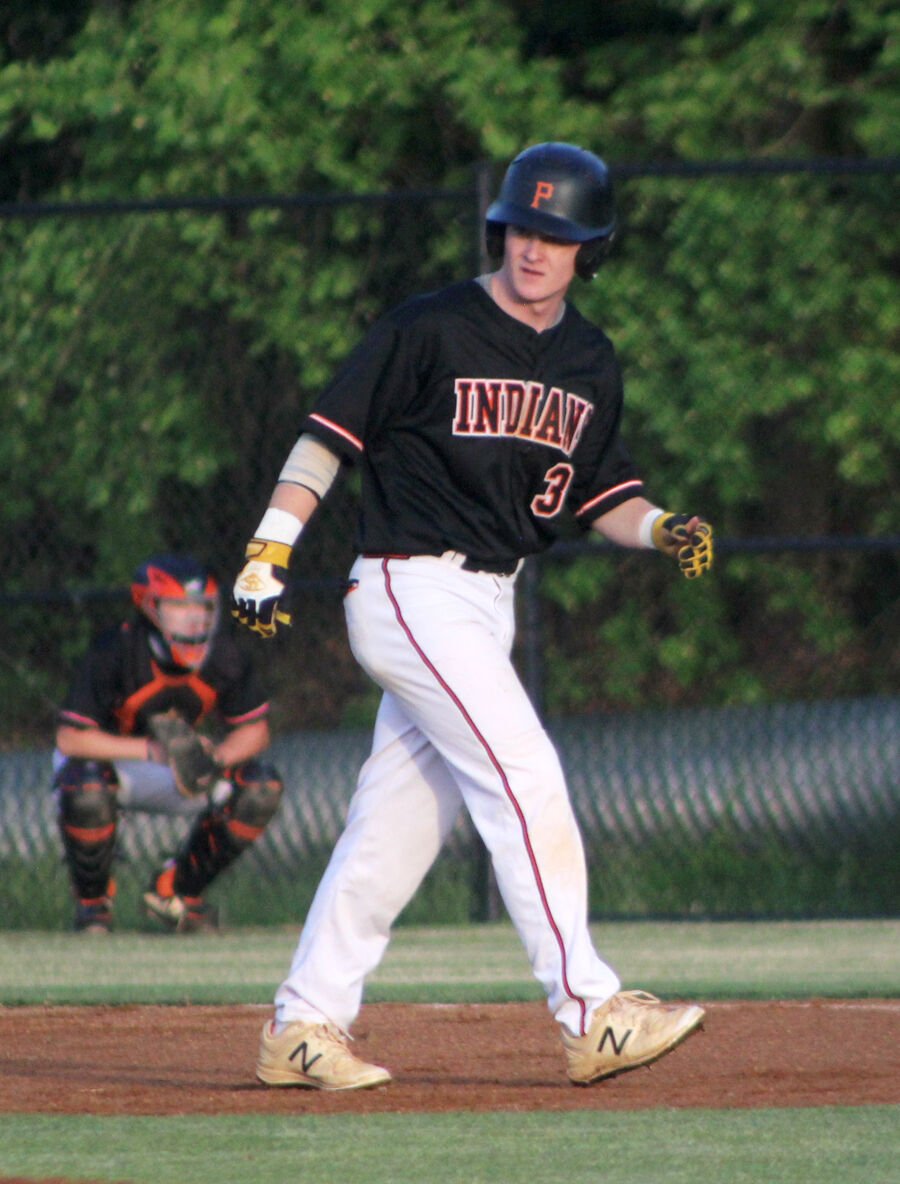 Powhatan High School senior Ben Allanson reaches first base on a single that he bounced off of the third-base bag and into left field in a varsity baseball home game versus Clover Hill on May 4, 2021.

POWHATAN – After all four players lost their junior season to the onset of the COVID-19 pandemic, Ben Allanson, Caden Beil, Stone Talley and Connor Woodel have not only gotten to be back out on the varsity baseball field alongside their Powhatan teammates for their senior year, but they were also able to embrace the opportunity to stand with their families on the diamond for Senior Night on Tuesday.

And the celebration didn’t stop there.

All four seniors contributed to a lockdown defensive effort that helped Powhatan fend off Clover Hill 3-2 to improve to 2-1 in the early part of the season.

“That’s what we’re built around: good defense – good defense and timely hitting,” said Powhatan head coach Gregg Conner. “It’s a team effort, and that’s the way we have to win.”

Powhatan was sharp in the field, and the four seniors all made key plays that either took the Cavaliers’ runners off the base paths or kept them off of home plate.

Beil, who was the catcher in Tuesday’s game, caught two runners stealing when he rifled the ball on two long throws in the second and sixth innings to Talley, who ensured that both runners were denied second base and sent back to the dugout.

“I couldn’t really do it myself; we have a great middle infield and I was just doing what I was told and how I was trained to do it,” Beil said. “We both did what we were supposed to do and it came together, and it worked out.”

“It was a perfect throw on both of them; I just put a tag on them, as simple as that,” Talley said. “You couldn’t ask for a better throw from him.”

Woodel, who is committed to Richard Bland College for baseball, sparked a 5-3-1 double play in the second inning when he rushed down a bunted ball, scooped it up and zipped it to junior Chase Gayness to retire the runner headed to first base.

“I was just thinking: let the ball come to me, because I was having a great night; I was very confident,” Woodel said.

From there, Gayness connected with pitcher Hayden Wasson, who quickly rushed over to third base, tagged the sliding runner while on the move and went into a tumble after making the tag, but raised his glove with the ball still clutched in the folds.

Woodel also chased down a foul ball that was hit about a foot or less inside the left field fence to pull his team out of the fourth inning.

“It was a great feeling, because I didn’t think I could get to it at first,” Woodel said, “but then I gave it a try, and I got it.”

One inning later, Woodel fielded a pop fly to pull his team out of the inning after Clover Hill had loaded the bases on straight walks.

While trailing Powhatan 3-2 in the top of the seventh with a runner on base, Clover Hill, who had added a run one inning earlier in the sixth, laced a hit into right field, but Allanson was there to stop the ball from traveling any further, thus holding the batter to a single and the tying run that was already on base to third.

“I saw it come off and I knew I had a job to do; I knew I had to stop it no matter how I did it,” Allanson said. “I just kind of let my body take over.”

Fittingly, it was Gayness who fielded a towering pop fly near first base to end the game and strand Clover Hill’s tying and go-ahead runs on the corners. Gayness’ game-ending play on defense complemented his huge game on offense. The junior multisport athlete batted 3 for 3 with three RBI and a double.

Gayness' double to left-center in the first inning and his third-inning single that he bounced across the ground, up the middle and on past a Clover Hill fielder’s glove were both delivered with two outs on the board. Facing one out in the fifth, Gayness plated Josh Boelt for the insurance run on a rocketing single that he launched deep into right-center.

“Chase had a good night, a really good night,” Conner said. “He was really barreling a lot of baseballs up and swinging at good pitches.”

Boelt led Powhatan with two runs scored and Allanson had one. Woodel had a fifth-inning base hit to center field that he extended into a trip to second base off of Clover Hill’s downhill throw to third.

Powhatan pitchers Wasson and Alex Reeves combined to scatter two runs and four hits in Tuesday’s game. Reeves in the seventh had a strikeout and a 1-3 play.

For Clover Hill on Tuesday, Cam Mazell hit a solo home run in the fourth inning.

Powhatan will next host James River on Thursday at 6 p.m.

“We’ve been playing together since we were like 7, 8 years old. We have this bond that’s like – I don’t think I’ve ever had anywhere else,” Allanson said. “It’s really fun to just come out here and just kind of throw the ball around and have a good time.”

“We have a great bond,” Woodel agreed, “and the more and more we play, the better the chemistry gets, the better we play.”

Powhatan’s girls tennis team, featuring a majority of players who are taking on their first season on the court at the varsity level, showed i…

Powhatan’s boys tennis team picked up its first victory of the season when it edged past Monacan 5-4 on Thursday. In singles, Peter Rusin defe…

Powhatan High School senior Stone Talley, after securing an out at second base, throws the ball to teammate Chase Gayness (21) for an attempted out at first in a varsity baseball home game versus Clover Hill on May 4, 2021.

Powhatan High School senior Connor Woodel initiates a 5-3 play from third base in a varsity baseball home game versus Clover Hill on May 4, 2021.

Powhatan High School senior Ben Allanson reaches first base on a single that he bounced off of the third-base bag and into left field in a varsity baseball home game versus Clover Hill on May 4, 2021.