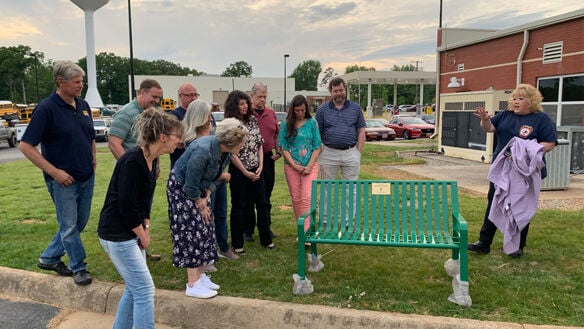 The family of the late Gretchen Smith looks at a bench dedicated in her honor at Powhatan County Volunteer Fire Department Company 1, where her husband, Carroll, is a firefighter. 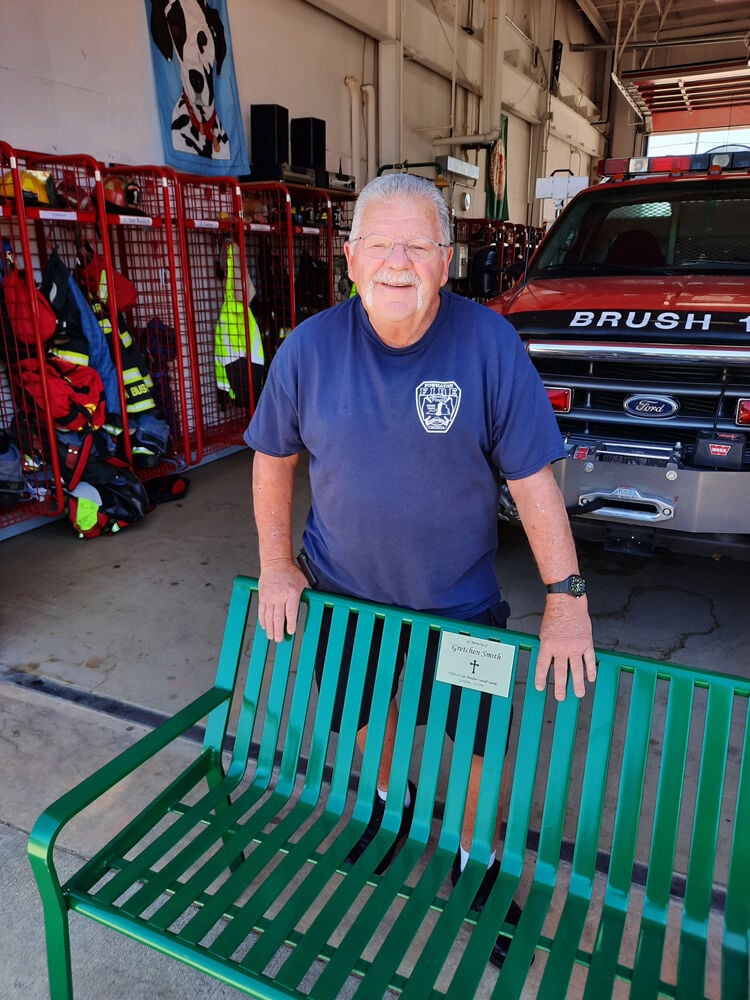 Carroll Smith stands by the bench dedicated in memory of his late wife Gretchen. He said he was incredibly touched by the gesture.

POWHATAN – A special ceremony held last week to honor the late wife of a dedicated local firefighter was supposed to be a surprise for her husband. But the laugh was on the dozens of people who successfully kept the secret from him when he did the one thing none of them anticipated – he left town.

Carroll Smith, a lifetime member of Powhatan Volunteer Fire Department Company 1, has not missed a membership meeting in the roughly 11 years he has served at the station. Often if you want to find him, you would search the station first or check to see if he is out on a call.

So, when company members conspired with his family to hold a dedication ceremony on Monday, May 17 for a special bench they bought in honor of his late wife, Gretchen Smith, getting him to the ceremony without letting him in on the surprise didn’t seem like a big deal.

But as the time for the regular evening meeting came and went and Smith was a no-show, the question of the night became, “Where is Carroll?”

It turns out, Carroll went to the beach with his brother, who has been ill, and didn’t tell anyone.

“Of all the times for me to go do something,” Carroll said disbelievingly a few days later in a phone call from the beach. “That was a well-kept secret or I wouldn’t have gone and missed it. I am really sorry I missed it.”

Smith laughed as he talked about his bad timing and said Gretchen was probably watching and had a good laugh about it, too. But he just as quickly became choked up as he spoke about how touched he was by Company 1’s gesture in honor of his wife of 40 years, who died on Feb. 27 at age 77.

“I felt bad at first because I wasn’t there. But then I felt blessed that people care that much about me and her. It was an honor for them to do something like that,” he said.

Once the shock of Carroll’s disappearance wore off, Company 1 still moved ahead with the ceremony on May 17 since all five of their daughters and their families had come out for the surprise.

Company 1 president Brenda Breon spoke briefly to the family before unveiling the bright green bench, which has a plaque in memory of Gretchen. The bench was placed behind the station facing the training grounds since Carroll loves helping train young firefighters, Breon said.

Company 1 members had been wondering what they could do in Gretchen’s memory because of the sacrifice she made being the wife of a firefighter, especially one as dedicated as Carroll. Breon noticed the benches in the Village and thought it would be a fitting way to honor them both.

“We know how much she meant to him. This is something we wanted to do for him but still honor her,” Breon said.

While offering a prayer during the bench dedication ceremony, former Powhatan Fire and EMS Chief Rick Bucher talked about the sacrifice made by not only firefighters but their families. Whether it is the constant noise of listening to the radio chatter in case a call comes in or the missed holidays, it is not always easy on a firefighter’s loved ones, said Bucher, who worked in Chesterfield County for 36 years before taking the position in Powhatan.

“We pray that those that sit upon this bench realize the sacrifices that families often make when their loved ones serve as volunteers or serve as career firefighters,” he said during the ceremony.

The couple’s daughters were just as moved by the way the station recognized their parents. Kim Llewellyn of Powhatan said she and her sisters found the unexpected gesture very thoughtful and touching. However, she laughed as she said how mortified Gretchen would have been to be the center of attention.

“She didn’t like any attention. She was very much a behind-the-scenes supportive wife,” Llewellyn said.

Carroll, a career firefighter who retired from the Richmond Fire Department after 43 years, readily admits being married to him took patience. More than once he left his wife in the middle of a meal at a restaurant or the family during a holiday celebration to go answer an emergency call. When he used to work 24-hour shifts in Richmond, she handled it well.

“I have seen a lot of guys who quit the job because their wife couldn’t stand them being gone 24 hours. We had five daughters so she was busy all the time with them. She was a great mother,” he said.

His wife loved the fire service and seeing him in uniform. Most of all, she knew how much he loved being a firefighter, so she was happy for him to do it, Carroll said.

Gretchen was a devoted Christian, an avid crafter, and was happiest when her family was together. She was a wonderful person with a great personality, Carroll said.

“And she had a smile. Everybody would comment on her smile. She was like two different people. When she wasn’t smiling she looked different. She was beautiful all the time, but when she smiled, she lit up the room,” he said.

Smith finally did see the bench on May 21 and said he found it beautiful and incredibly moving.

The family of the late Gretchen Smith looks at a bench dedicated in her honor at Powhatan County Volunteer Fire Department Company 1, where her husband, Carroll, is a firefighter.

Carroll Smith stands by the bench dedicated in memory of his late wife Gretchen. He said he was incredibly touched by the gesture.