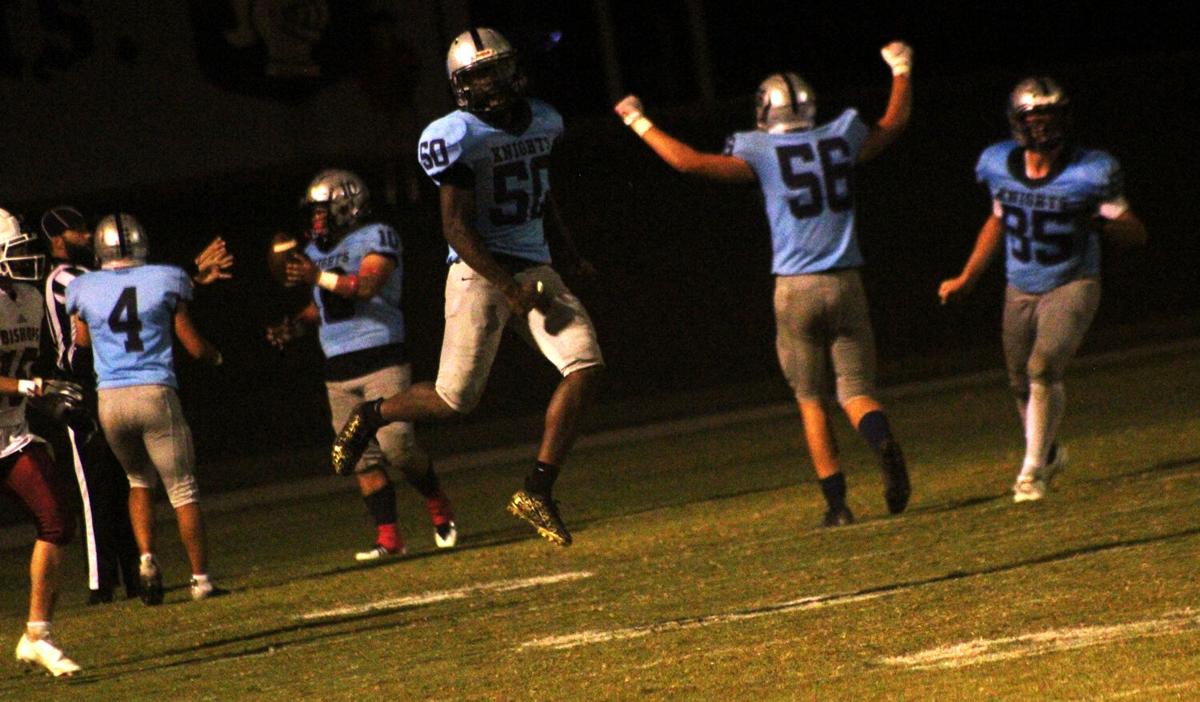 The Blessed Sacrament Huguenot Knights celebrate an interception made by Gage Smith (in background at left, holding the ball) in a home game versus Virginia Episcopal School on Oct. 1, 2021. 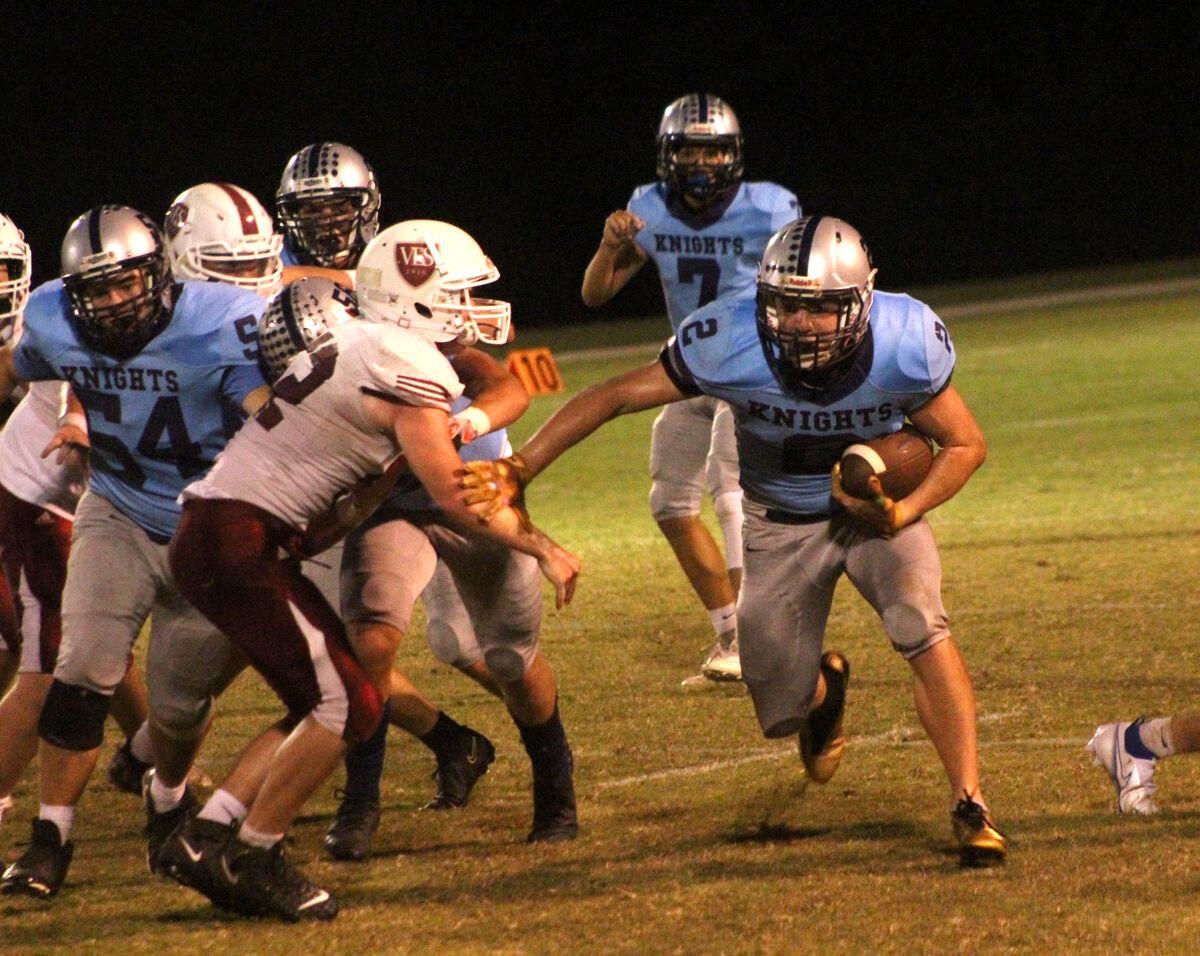 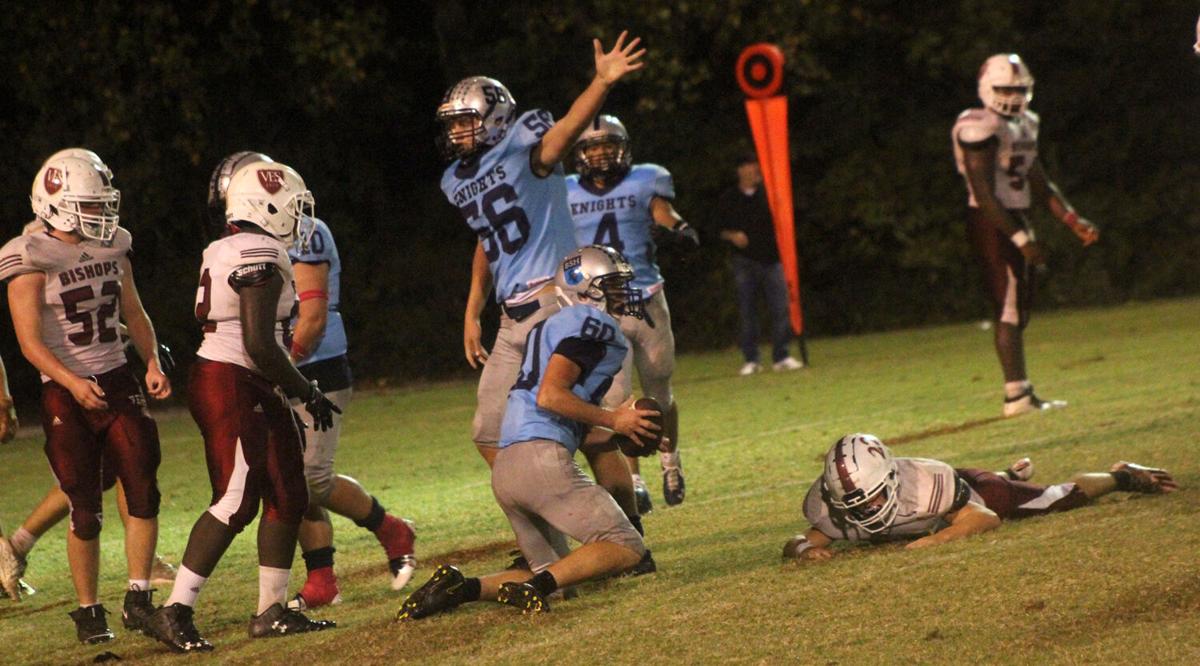 Blessed Sacrament Huguenot's Garrett Musselman (56) signals that the ball belongs to the Knights after Nathan Roberts (60) recovers a fumble in a home game versus Virginia Episcopal School on Oct. 1, 2021. 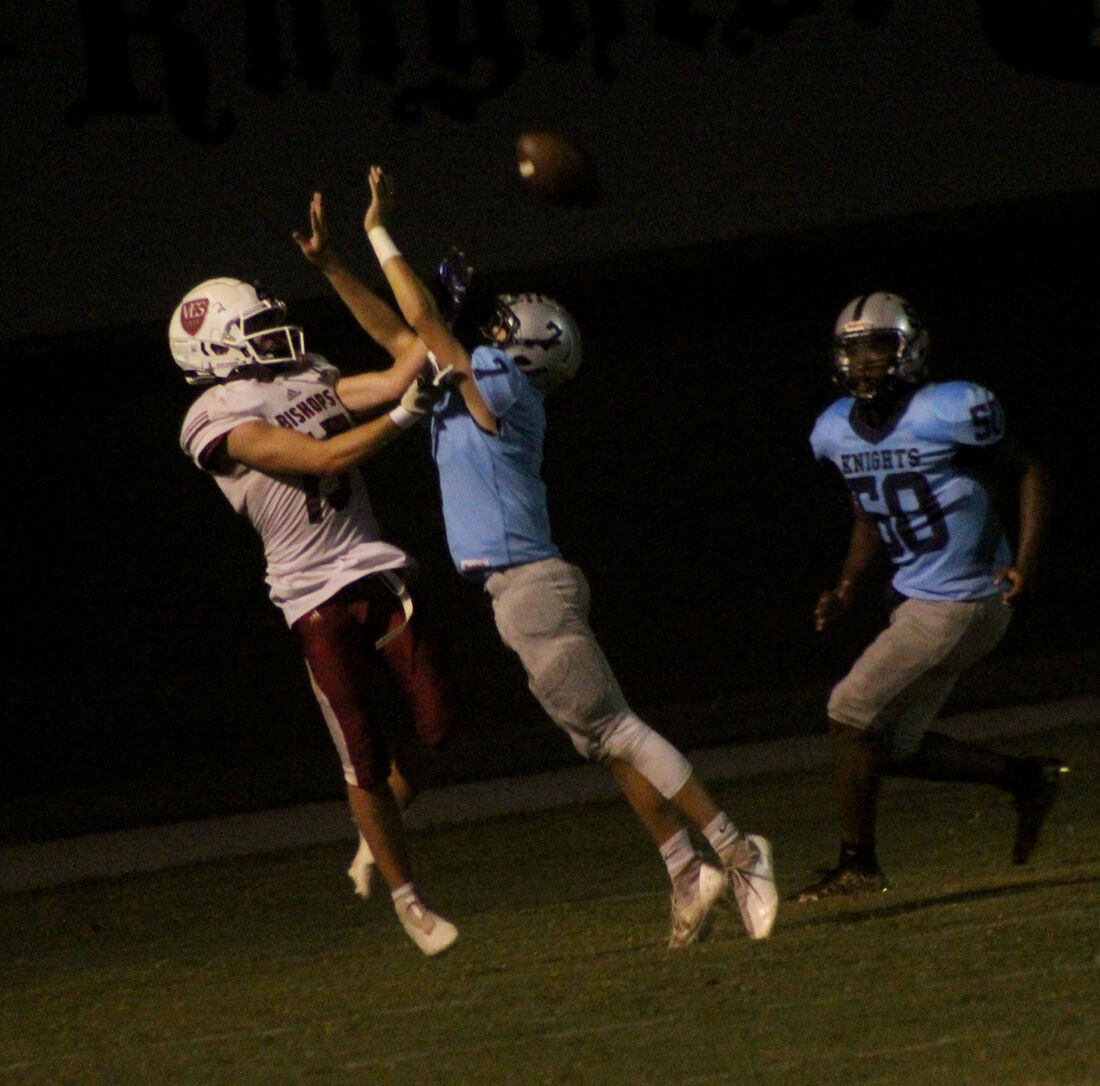 Blessed Sacrament Huguenot's Afton Harrow (center) tips a pass as Harrison Lee (5) looks on in the Knights' home game versus Virginia Episcopal School on Oct. 1, 2021. The pass would be caught by Gage Smith (not pictured) for the interception. 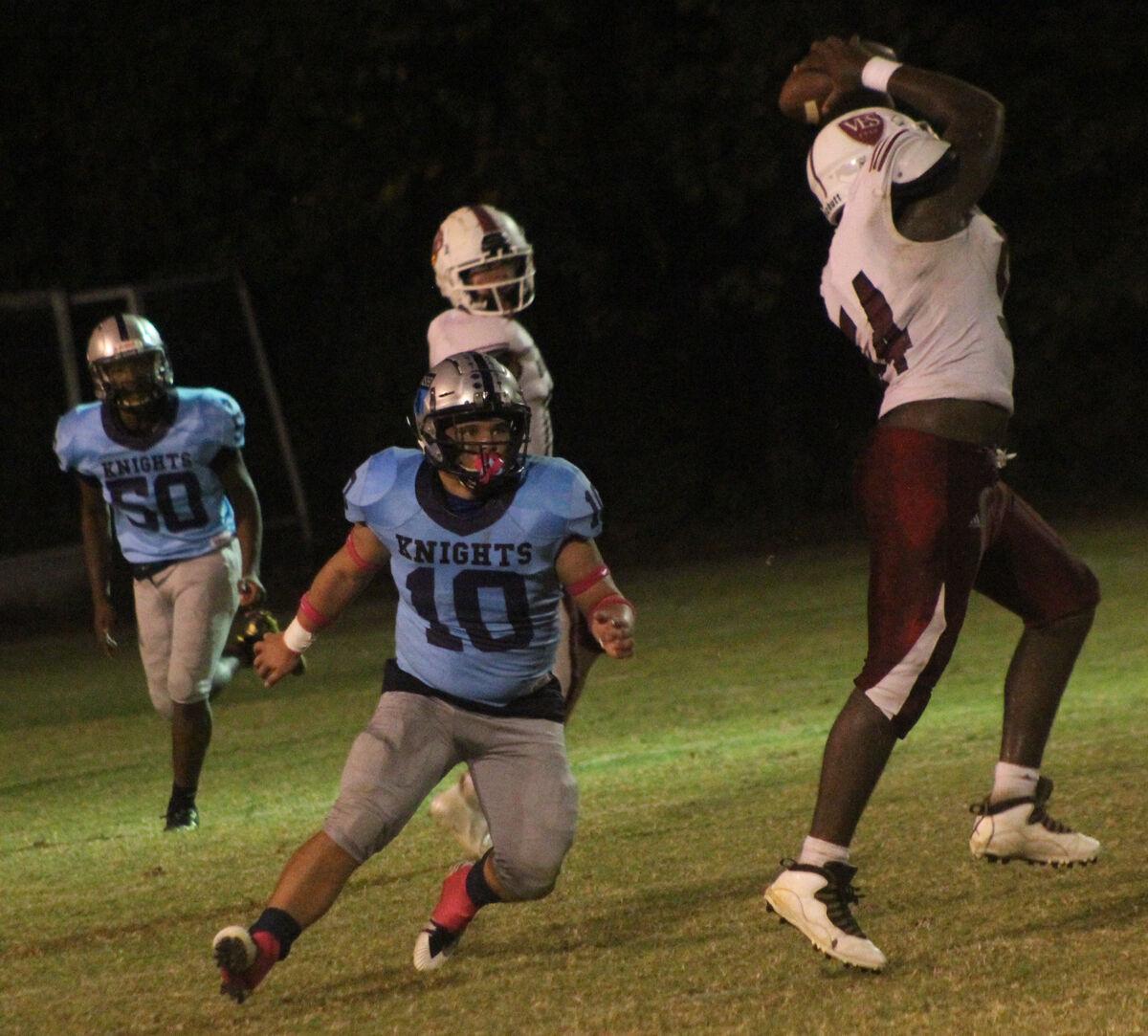 Blessed Sacrament Huguenot's Gage Smith gets ready to tackle the Virginia Episcopal School receiver in the Knights' home game versus the Bishops on Oct. 1, 2021.

POWHATAN – Going into Friday’s game, Garrett Musselman and his fellow Blessed Sacrament Huguenot teammates who had been there for four years had never been 5-0.

But that all changed when the fourth-quarter clock hit zero and the Knights on the sideline burst into celebration as the team came away with a tremendous 20-12 victory over visiting Virginia Episcopal School.

With the win, BSH not only remained undefeated more than halfway through the regular season, but it also handed the Bishops (3-1) their first loss of the fall 2021 campaign.

“I’m just really proud of them. They met adversity today,” Blessed Sacrament Huguenot head coach Gary Brock said of his players. “Tonight we had a huge test, and we passed.”

On defense, Musselman, David Mann and Nathan Roberts led the Knights in penetrating the backfield and terrorizing the quarterback. Musselman dished out two early tackles for loss and combined with Roberts on a sack in the second half. On the very next play following Musselman and Roberts’ sack, Roberts recovered a Bishops’ fumble on the handoff.

“We knew they were going to be really good passing, so we wanted to rush the quarterback as much as possible to mess up his throws,” Musselman said, “They’re a very good passing team.”

The visiting Bishops at times were able to chip their way downfield through the air, and they did notch two passing touchdowns – one in the second quarter, one in the fourth – but outside of one 50-yard throw in the second, the Knights’ defense kept the Bishops from landing big plays or deep passes.

“We said tonight that the ball game was going to be won or lost up front, and it sure was,” Brock said. “Our defense played a courageous game…they bent, but they never really let them get the big play on us, and that was very important.”

“A lot of these seniors have been here for four years playing this defense,” Musselman said, “and it just shows that hard work pays off on defense – that’s what wins championships.”

Musselman had 11 tackles and Harrison Lee made 13, including a tackle for loss.

The team’s leading tackler was Gage Smith, whose phenomenal night not only featured a whopping 16 tackles, but also a pivotal play late in the first half.

The Bishops had driven all the way down to the Knights’ 5-yard line off of the 50-yard pass, but fell back into a 3rd and 14 situation following a penalty.

The pass was aired out to a receiver near the left corner of the end zone, but defensive back and quarterback Afton Harrow, who was covering the receiver, tipped the ball. It flew a ways to the right and fell into the hands of Smith, whose interception gave the Knights possession with a handful of seconds left in the half.

On offense, BSH senior Josh Decker delivered a yeoman’s effort in the ground game, racking up 154 yards and scoring two touchdowns on 22 carries. He also made three solo tackles on defense.

The Knights' game-opening drive was the textbook "three yards and a cloud of dust" march to the end zone, with sophomore Hunter Case posting the longest run of the 15-play, 67-yard drive with a 14-yard sprint.

The Knights kept the visiting Bishops off-balance throughout the series, mixing snaps to the quarterback with direct snaps to the intended rusher. Case, Decker, Harrow and Lee all had carries in the opening minutes.

By the time Decker had reached the end zone for a 6-0 lead on a goal line rush, the Knights had reduced the first-quarter clock to less than 4:57 before the Bishops' offense first touched the field.

“That’s something that we pride ourselves in and that we’ve been successful in in all the ballgames that we’ve played so far,” Brock said of their opening drive. “It’s very important that we start off on a positive foot.”

Virginia Episcopal's first drive ended on the Knights' 39 when Smith tackled the Bishops' ball carrier during a fourth-down play to force a change of possession.

The Knights only needed three plays to find the end zone this time, as Decker broke two tackles and stayed ahead of a diving defender in the final few yards to rumble a whopping 52 yards to the house for his second touchdown of the night.

The Bishops tapped into a rhythm with their passing game and found the end zone on a seven-yard strike through the air, tightening the home team's lead to 12-6. The Knights punted the ball on their next possession, but on the Bishops’ next offensive series, Mann pressured the quarterback to help force third and 15, Harrow defended a deep pass to force fourth down and Jeb Hatfield, with the assist from Musselman, tackled the rusher on the ensuing play to turn the ball back over to the Knights’ offense on the Bishops’ 31.

A pass play to receiver Harrison Lee and a penalty pushed the home team up to the 12, and senior Zander Nadeau caught the outside edge along the right side and ran in the 14-yard insurance touchdown. Decker’s two-point conversion made it a 14-point game.

The Bishops would find the end zone again on a five-yard pass with 1:32 remaining in regulation, but Musselman fell on the ensuing onside kick to give his Knights good field position at the Bishops’ 37.

Three runs from Decker pushed the Knights inside the visitors’ 10 to keep the ball in the home team’s hands, and Blessed Sacrament Huguenot was able to kneel during the final play and end the game.

“We knew this was a good team coming in, and to play a quality team like this and get a win…the confidence right now I think is shooting through the roof,” Brock said. “We feel good going in. We just need to keep everybody healthy and go from there.”

The Knights will play Front Royal's Randolph-Macon Academy on the road on Saturday, Oct. 9 at 2 p.m.

The Blessed Sacrament Huguenot Knights celebrate an interception made by Gage Smith (in background at left, holding the ball) in a home game versus Virginia Episcopal School on Oct. 1, 2021.

Blessed Sacrament Huguenot's Garrett Musselman (56) signals that the ball belongs to the Knights after Nathan Roberts (60) recovers a fumble in a home game versus Virginia Episcopal School on Oct. 1, 2021.

Blessed Sacrament Huguenot's Afton Harrow (center) tips a pass as Harrison Lee (5) looks on in the Knights' home game versus Virginia Episcopal School on Oct. 1, 2021. The pass would be caught by Gage Smith (not pictured) for the interception.

Blessed Sacrament Huguenot's Gage Smith gets ready to tackle the Virginia Episcopal School receiver in the Knights' home game versus the Bishops on Oct. 1, 2021.