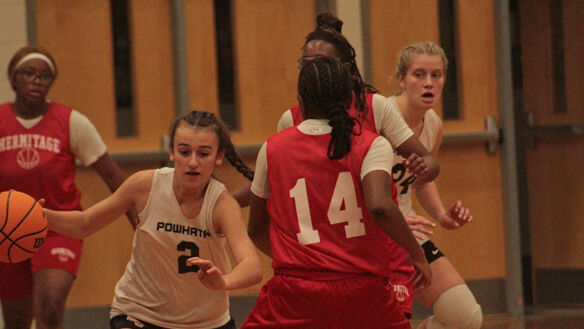 Powhatan sophomore guard Emma Terry (2) dribbles past a defender in the team’s opening scrimmage against Hermitage on Nov. 17. 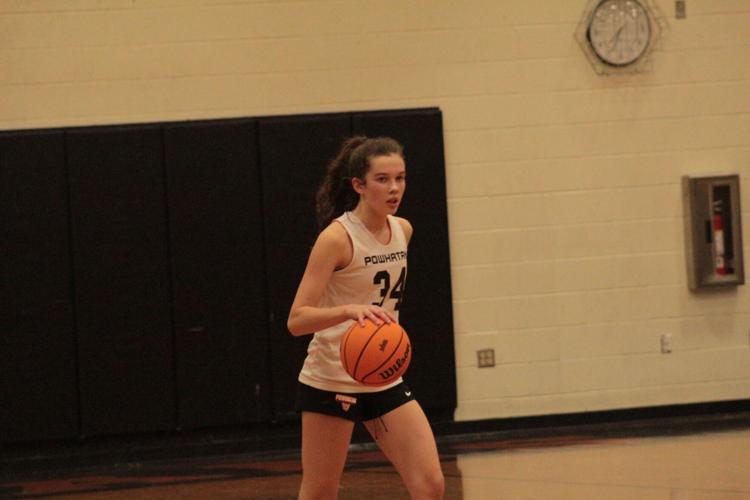 Guard Corynn Lampman takes the ball up in the team’s scrimmage versus Hermitage.

Following up a 2021-22 season that included the team’s first ever appearance in the Class 4 State Tournament will be a tall task for this year’s Powhatan girls basketball program, but with plenty of familiar faces and a coaching change that features two local legends returning to the bench, there’s plenty to get excited about.

Last year’s Indians coached by Kristy Henderson in her final year with the school were among the best in the region offensively, with crisp ball movement, multiple high-caliber defenders and star power headlined by seniors Faith Henderson and Kayla Terry.

Replacing Henderson the coach on the bench will be long-time boys head coach Steve Washburn, who returned in an interim capacity with the boys team to end its season last year. The decorated Powhatan figure brings with him a winning resume from his 13 years as the head coach of the boys team.

“I just thought the program was in a really good position, and I thought it was a good time for me to get in with a well-established program that [Kristy Henderson] built up and work with them and hopefully continue to have the success that she’s already developed,” Washburn said after he was announced as the new head coach.

Washburn also brings with him another familiar face to the Powhatan bench in Paulette Bowman, who he was an assistant under when she first started coaching the girls team.

Bowman has decades of experience as an all-around coach that worked not only with Powhatan’s girls basketball team, but also with the school’s cheerleading and track and field programs as well. With two experienced coaches that helped elevate the sport of basketball in Powhatan, it’s easy to see why despite so many major departures, the team is in good hands as far as Xs and Os.

Sophomore Emma Terry says that it has been a positive environment working with Washburn and Bowman to start the season, noting the energy the team shares entering this new era of Powhatan basketball.

“They’re both really positive, and they try to put us in the position that’s best for us,” Terry said.

Now that Terry and Faith Henderson are playing at the collegiate level, one of the bigger questions surrounding the team revolves around who becomes the next go-to scoring threat that the offense can play through.

There’s likely not a clear answer, especially this early in the season, but the Indians certainly have promising options.

Returning contributors from last year’s team like seniors Sam Flippo and Katherine Cerullo have starting experience that’ll prove vital, while juniors like Shauna Callahan and Corynn Lampman will be expected to step into even larger roles from their sophomore seasons.

Flippo, who is coming off an impressive volleyball season, returns as the team’s de facto perimeter defender, establishing a reputation in her time with the team as an excellent on-ball wing stopper.

Lampman also provides a resume of defensive fortitude for the Indians, showcasing her quick hands on ball swipes and timing on shot contests as a key role player on last year’s run to the region finals.

She’s also a capably talented driver to the hoop that can finish through contact and earn trips to the free throw line.

Cerullo will lead the frontcourt after an impressive junior season, and will likely be one of the team’s best scorers inside the paint as well as a crafty playmaker in fast break situations.

Another returnee likely to see a lot of minutes is Emma Terry, who earned minutes in the backcourt last year with a quick-trigger jumper and some offensive finesse reminiscent of her sister Kayla.

Lampman says that the scoring aspects of the team will have to come from everyone that sees the floor, and that confidence in that shooting will be key to their success on the offensive end.

“It’s going to be a different season,” Lampman said. “Everyone needs to shoot and not be afraid to shoot. Shooter’s gotta shoot.”

It’s a roster that’ll likely need time to develop an identity in the early parts of the season, but the talent is unquestionable, and Washburn says after their first scrimmage against Hermitage, he came away impressed with the defensive efforts and passing to start the new season.

With a chance to build off a historic season for the program and plenty of the people that helped get the team to that point still sharing the court, it looks to be another promising season of basketball in Powhatan.

After a 66-8 whalloping at the hands of Covenant School in just its second game of the season, there were murmurs that the defending champion …

In their first ever appearance at states, Ella Green and Sean Seibel entered the stage among the best cross country runners in the state, and …

Powhatan sophomore guard Emma Terry (2) dribbles past a defender in the team’s opening scrimmage against Hermitage on Nov. 17.

Guard Corynn Lampman takes the ball up in the team’s scrimmage versus Hermitage.