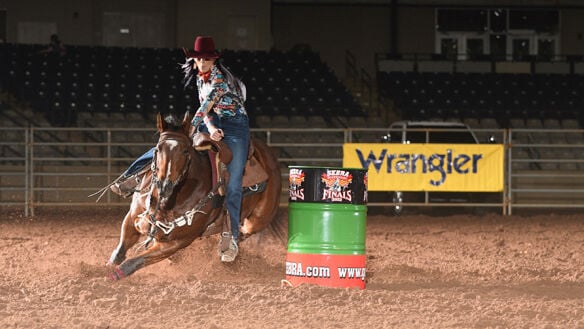 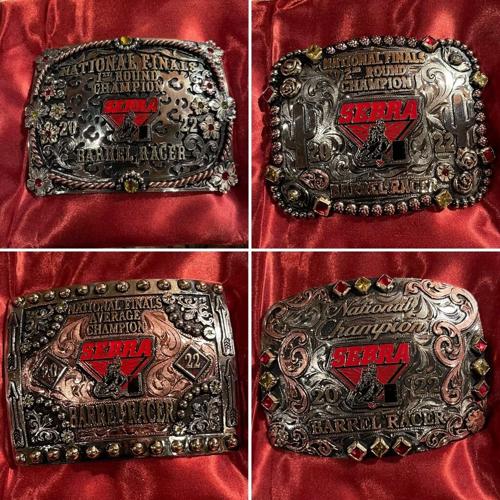 Powhatan local Reed Dale won belt buckles for the average championship, one for each go-round victory and the national championship at the SEBRA National Championship.

Entering the SEBRA National Finals for barrel racing held at Murfreesboro, Tennessee in second place, Powhatan native Reed Dale needed a dominant showing to take first place and claim a national title at the biggest rodeo event of the season.

After winning both of her go-rounds, Dale left the rodeo the national champ, the champion on average and winner of the colleague-voted Horseman of the Year award.

All this to say, it was about as perfect a weekend as it gets.

Dale, who has won multiple barrel race titles and belt buckles over the years dating back to her days in the youth circuit, saw this win as a completely different challenge compared to her previous competitions. It was her first in the world of rodeos, which is not barrel racing-exclusive like her previous wins.

“This is my first jump into the rodeo world, and my first championship as a rodeo contestant,” Dale said. “It’s asking a very different thing from your horse. It’s very different.”

With the rodeo, which also has events like bull riding on its schedule, Dale said she had to take into account the larger crowds, louder atmosphere and lack of exhibition or practice runs around the barrels that allows her and her horse to get a better feel for the ground they’re competing in.

Her school schedule made her very selective on which rodeos she could enter.

“There were a lot of rodeos that I wasn’t able to go to because I was studying, and I had to pick and choose where I could go based on my test dates and stuff like that,” Dale said.

With less experience at the rodeo to begin with and a need to prioritize her studies, Dale didn’t necessarily see this being a season that ended in a title run.

In fact, compared to the rider that was in first place heading into the SEBRA finals, Dale says she had just 26 rodeo runs compared to her competitor’s 45.

“Actually going in, I didn’t know this was going to end up being our year,” she admits. “Coming into the finals I really just told myself that there was no pressure and to take it one run at a time and let my horse shine and she did.”

She defied her own expectations, coming away with a terrific showing at Murfreesboro that ended with her winning four belt buckles. The other accolade, her Horseman of the Year honor, was something that was voted on by her peers in the barrel racing community.

“That was really cool to win, I was super excited and I’m thankful they chose me to win that,” she said. “I put a lot into taking care of my horse. My preparation takes days ahead of time to make sure she’s ready and feeling her best, and I really try to put her first.”

Dale’s trusty mane, Blazin’ Six Moons, has been with her since the horse was 2 years old when Dale got her from a woman in Texas off of Facebook.

After having her train with a friend and riding with her over the years, Dale says she’s thankful to be competing with a horse that has surpassed every expectation she’s had of her.

“She’s pretty much grown up with me since she was almost a baby,” she said of her horse. ”She’s just been the most phenomenal horse.”

Initially not thinking Blazin’ Six Moons would make a great rodeo horse because of her fear of loud noise, she was surprised to see her handle the big stage as well as she had when they ultimately gave her a try.

In her first rodeo with the horse, Dale was allowed to have an exhibition run to end the day and says she would’ve actually won that rodeo had the time been counted. It was then that they realized she was capable of competing among the best in the sport.

Still, Dale emphasized warming up with Six Moons in quieter areas to work with her without her getting nervous from the noise.

It’s been a long journey for Dale to get to that national title, both at the rodeo and in her studies, but with a great horse and the support of her mom Vicki through it all, she was able to come away a champion.

“I’m super thankful for my mom, I wouldn’t have been able to do what I did without her. I’m just really appreciative.”

POWHATAN – Former Powhatan supervisor and community leader Carson Tucker was remembered last week for his depth of service to the county.

POWHATAN – For a minute, everything was quiet. Then multiple shots rang out in the empty hallways of Powhatan Elementary School and everything…

Powhatan Board of Supervisors prepares to take hard line on Keystone

Powhatan local Reed Dale won belt buckles for the average championship, one for each go-round victory and the national championship at the SEBRA National Championship.