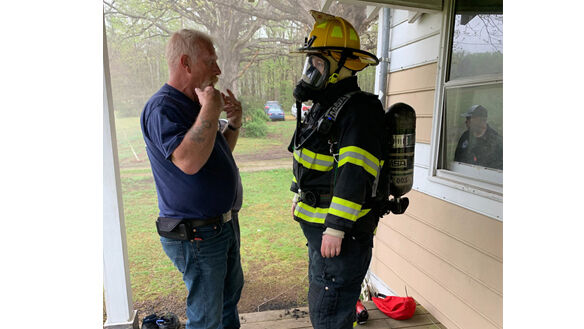 Instructor Leon Sydnor gives editor Laura McFarland instructions before she goes into a vacant house filled with fake smoke to experience some of what firefighters do in zero visibility situations. 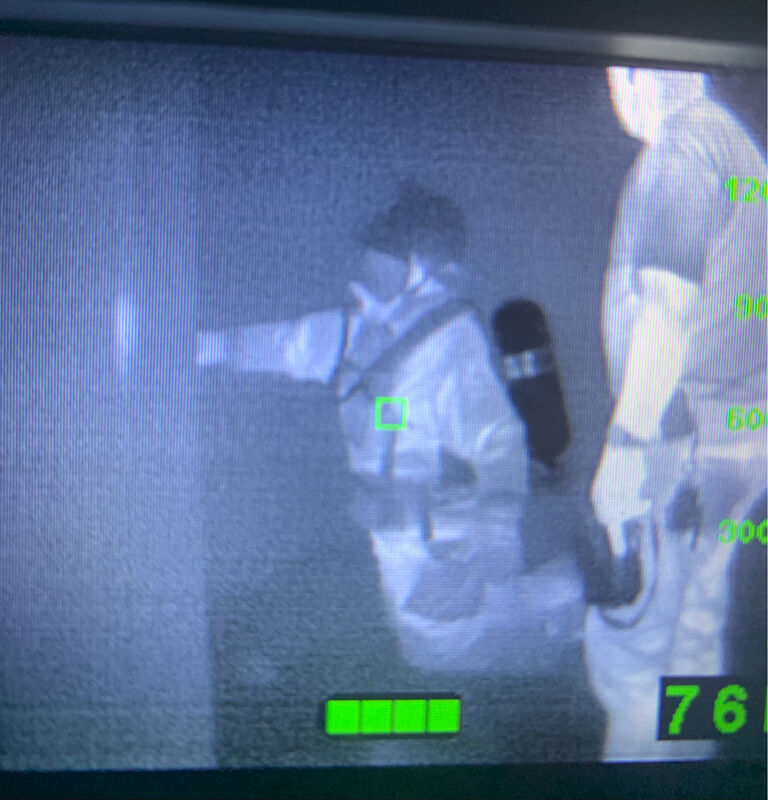 A thermal imaging camera was used to show how instructor Leon Sydnor, right, coached editor Laura McFarland through a vacant house filled with fake smoke so she could experience some of what firefighters do in zero visibility situations.

I admit it, when I put on the regulator and the loud mechanical breathing began, I wanted to do a Darth Vader impersonation. Thankfully, I resisted.

I had the opportunity to strap on the regulator as part of roughly 65 pounds of firefighting gear for a short time on the morning of April 10. It was an offer extended by Powhatan County Fire and Rescue to give me more insight into what firefighters experience when they don that same gear.

It started with a conversation. Back in March, I was talking to Pat Schoeffel, assistant chief, and Leon Sydnor, assistant fire marshal, for a story about a vacant house on land owned by Evergreen Community Church. The church let public safety personnel use the house for training as it was slated for demolition.

The house is excellent for training as it is only 1,075 square feet but is compartmentalized with six rooms and a bathroom. Having such a divided layout means firefighters have to really work to do a thorough search.

“After we finished, we opened the windows and blew out all the smoke and they said ‘it is this small,’ ” Leon said with a laugh a few days after the training.

Added to that, having various rooms makes it easier for a team to get separated from one another, which can be the difference between life and death.

Pat and Leon talked about the many ways they had been using the house, including exercises in search and rescue, ventilation, ladders, and hose line stretching. They mentioned how prime the house was to fill with fake smoke to simulate the zero visibility firefighters may encounter on a call.

At some point during the conversation, they suggested I could come out and get a small taste of that experience. I decided to take them up on the offer.

The fun started the day before, when I went to the fire administration office to pick up turnout gear. Chief Phil Warner helped me get what I needed and answered my questions about the gear as the pile grew.

The pants were a Goldilocks scenario. The first pair was too small, the second pair was too long (by about 6 inches, which led to me almost slipping and falling), and the third pair was JUST RIGHT. The bunker coat and boots we got right on the first try. A yellow Nomex hood fits over the head and covers everything except the face to offer extra protection from intense heat.

The ensemble was completed with gloves (placed in right and left pockets to avoid confusion) and a helmet. Phil demonstrated folding the pants down over the boots, a shortcut used so firefighters can quickly step into them, pull them up, and slide on the suspenders.

When I arrived at the house, most of the Firefighter 1 and 2 Night Academy students who were going to be doing search and rescue training were already assembled. Instructors Ken Saterwhite and Taylor Goodman started the class outside, having the students stretch and walking them through what they would experience. Meanwhile, Leon and firefighter Christine Keenan took me to the front door and helped me get ready.

As I stepped into the boots and donned the pants and coat, every article of clothing had weight to it – and I am not just talking about how many pounds they physically added. No, they weren’t light, but when I think about the job they have to do protecting men and women as they step into a burning building, it is unimaginable.

Just to put it in perspective, 500 degrees for five minutes is the minimum standard firefighting gear has to meet, Leon said. Crawling around the floor, a firefighter is often in the 200- to 300-degree range, but the closer you get to a fire, the hotter it gets.

In addition to the turnout gear I brought, Leon outfitted me with and explained the uses of an air pack and mask. He attached the regulator to the mask, which sparked the Darth Vader impulse. He also showed me the Personal Alert Safety System (PASS) device, which emits a loud beep if a firefighter stays still for more than 30 seconds, alerting others of possible distress.

My goal on this short exercise was to go into the house on my hands and knees and explore the rooms, looking for victims. I didn’t have to drag out the victims, but the students who came after me did. Leon and Christine came inside with me and tracked me using thermal imaging cameras, which could read my heat signature, and gave me instructions and tips along the way.

And I needed them. You don the mask and the view definitely feels a little strange, almost like you are a fish looking out at the world from a fish bowl. But in zero visibility smoke, the world disappears and you feel so cut off from everything.

Added to that, the gear was such that I couldn’t really lift my head, which Christine later told me is a skill you have to work at over time. So this experience was so much more about what I could feel than what I could see.

When we entered the house I went to the right, making sure to use the wall and furniture. The first room had a couch, and Leon reminded me that victims can often be found on couches. Sure enough, Victim #1, a toddler, was lying right there. Unfortunately for him, I was doing search, not rescue, so he had to wait for someone else to save him. As we continued around the room, Leon pointed out things like looking in closets, where people, especially children, sometimes hide.

Down the hallway, another door led to what I realized was a bedroom when I felt the wooden foot board. A few feet away in the small room was a dresser, and Leon reminded me of a practice some people who can’t afford cribs use – putting sleeping babies in dresser drawers. Sure enough, Victim #2 was lying in the drawer. The third and final adult victim was lying prone on the bed.

Leon said these were the only three victims, but we were still going to explore the rest of the house. I passed through a dining room, stopping to search under a table, before moving to a small back bedroom. There was no furniture, which meant it had a large open space in the middle.

Leon pointed out how disorienting it could be if I lost connection with the wall while searching an area. One way to keep that connection and still do a thorough search was to keep my foot pressed against the wall and sweeping the center of the room with my hands searching for victims. To increase their reach even more, firefighters use the handles of their axes (not the end with the axe head) to sweep an area.

Unlike a designated fire training center, where fires can be set so firefighters experience working in a building with real heat and smoke, instructors simulated fire in this training exercise using a red light, which for me was in the second bedroom.

I crawled around that house for less than eight minutes in full turnout gear and it was hot and tiring. Doing that in 200-degree heat while searching for and rescuing victims of unknown size (for example, the dummies ranged from 10 to 105 pounds) seems unimaginable.

Before I knew it, I felt my way to the back door and we were outside again. The light of the early morning seemed so bright after the total lack of visibility in the smoke.

After I walked back to the front of the house and doffed my gear, I saw that the students were still standing and listening to the instructors. One assured them when describing the upcoming conditions that nothing in the house would hurt them.

As I stood listening, I thought about when these men and women complete their training and become firefighters and the dangers they could face. I was once again grateful that we have the caliber of people in our community who volunteer and build careers in the public safety sector – the ones who go toward the danger, not away from it, to help those in need.

Instructor Leon Sydnor gives editor Laura McFarland instructions before she goes into a vacant house filled with fake smoke to experience some of what firefighters do in zero visibility situations.

A thermal imaging camera was used to show how instructor Leon Sydnor, right, coached editor Laura McFarland through a vacant house filled with fake smoke so she could experience some of what firefighters do in zero visibility situations.