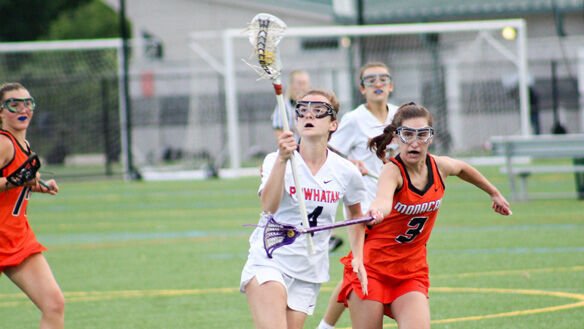 Senior Samantha Flippo (4) deals with aggressive defense from the Monacan Chiefs while making a run into the attacking zone in Powhatan’s 23-5 4A regional quarterfinals win on May 25, 2022. 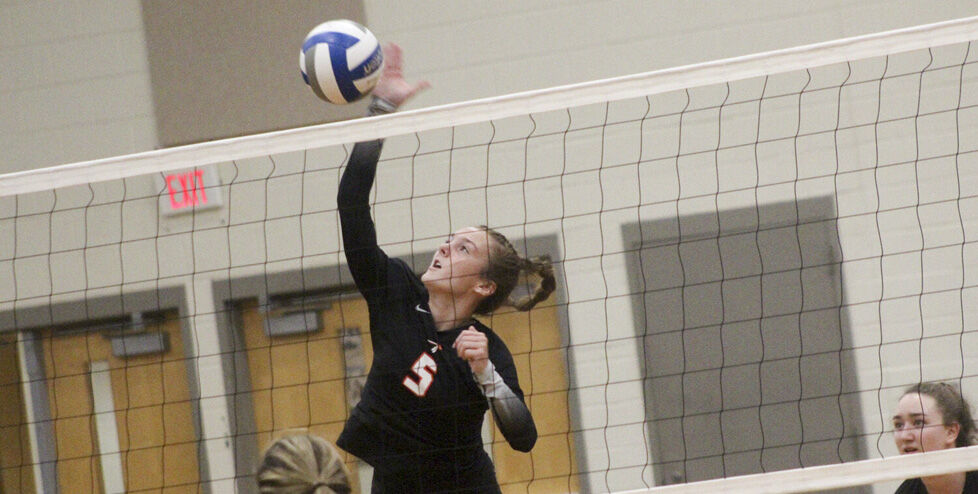 By the time September rolls around, most senior high school student-athletes have their commitments set in stone with the college of their choice while the schools themselves close the door on recruiting from the senior class and onto the younger generations of athletes.

Powhatan multi-sport athlete Sam Flippo wasn’t in that boat. By September of her senior year, she admits she was fairly behind the usual schedule for those decisions, which put her in a tough spot when reaching out to schools about opportunities in their lacrosse programs.

“It was hard to trust the process when I didn’t really have a place,” she admits.

While Flippo is a standout basketball, volleyball and lacrosse player, she decided that lacrosse was her true love of the three, and she felt her journey as an eighth-grader trying out the sport on a junior varsity rec team to a defensive stalwart on a program-defining Indians girls lacrosse team made her an attractive recruit despite many schools closing the book on her graduating class.

“It was very special to me because it was my own journey. I couldn’t really compare myself to other athletes because I had to make it all for myself,” she said. “I had to work for every single thing.”

Playing basketball since she was 4 years old, Flippo says she’s always been a defense-first player in everything she did, which carried over into her newfound passion for lacrosse.

While not as experienced as a lot of the college-bound lacrosse players she’s faced over the years, she got so good so quickly in part because her love for defense in basketball smoothly transitioned over into her early attempts at lacrosse. By the time of her junior year with Powhatan’s lacrosse team, it was clear Flippo was defending at the level of a collegiate athlete.

The recruiting experience could best be described as a roller coaster of emotions for Flippo, who was constantly reaching out to programs to gauge interest, only to find a path of rejections along the way.

“Every time someone viewed my profile on SportsRecruits I would get so excited and every time I got a rejection I would cry because I just wanted someone to want me to play for them,” Flippo said.

With all the recruiting inquiries she sent out, the one school that was always on her mind was High Point University in North Carolina.

Flippo fell in love the program after multiple visits and lacrosse camps, as well as the connections of one of her favorite coaches working there, but after a January visit in her junior year, she was told by the university that they didn’t have any room for someone in her class.

The school checked all the boxes for her: a great campus, the quality of the dorms, a strong lacrosse program and the courses offered that allowed her to follow in the career path of becoming a police officer like her parents.

As far as lacrosse went, what stood out to her was how welcome she felt with the girls she played with at the camps. All things considered, it was the perfect fit.

“The first camp I went to all the girls welcomed me, they were teaching me, and I didn’t really have that teaching in lacrosse until the last couple years so I felt like I could learn so much there.”

After not finding much success getting noticed by the team, she felt she had to look to smaller schools if she wanted to continue playing lacrosse at the next level. She did receive an offer from Queens University of Charlotte, but she says the fit wasn’t right.

After one more rejection from a school she liked, Flippo ultimately decided it might be time to consider schools beyond her interest in lacrosse.

That temporary defeat lasted just one night once she received a message from High Point coach Lyndsey Boswell. What Flippo assumed would be an offer at a walk-on position or even a tryout turned out to be an outright scholarship offer from the school of her dreams. With the offer on the table, Flippo didn’t hesitate to accept.

Now with a decision locked in on her future, Flippo can enjoy one last ride at Powhatan with three teams that will look to her as a leader in every respect.

She doesn’t intend for this to be her last time playing organized basketball or volleyball though, citing intramural or club opportunities as something definitely in her plans once at High Point.

“I can’t see me never playing those sports again,” she said.

Coming off a program-defining season, Powhatan basketball looks to familiar faces to lead the way

Senior Samantha Flippo (4) deals with aggressive defense from the Monacan Chiefs while making a run into the attacking zone in Powhatan’s 23-5 4A regional quarterfinals win on May 25, 2022.