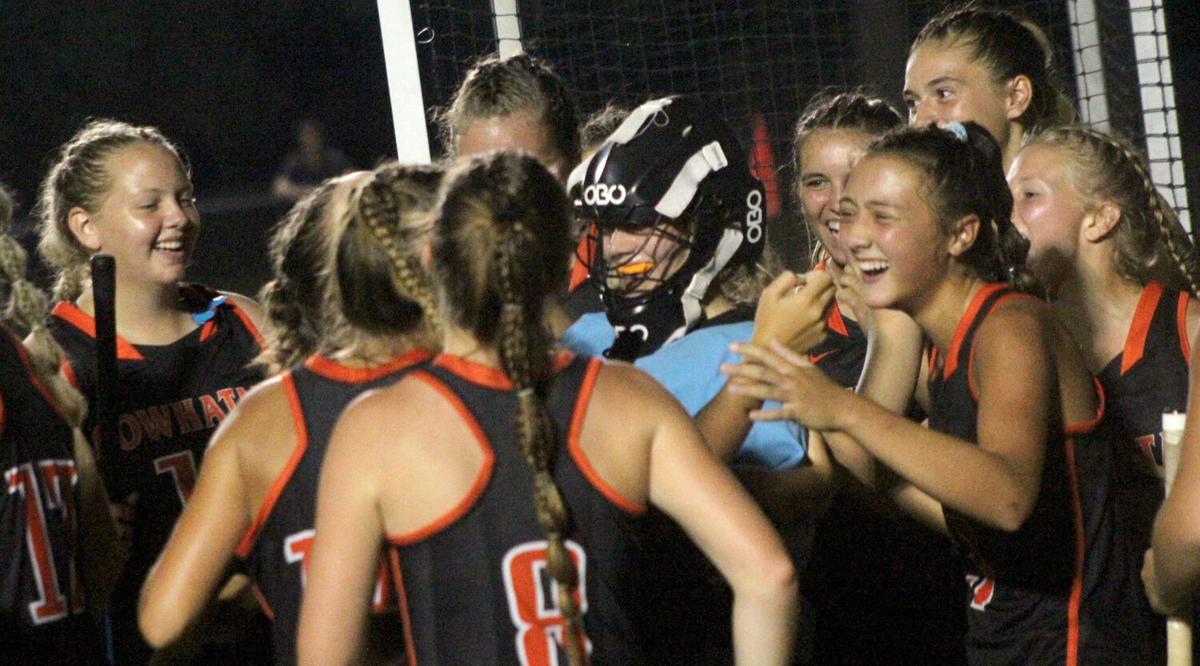 Powhatan field hockey players celebrate around their goalie Peyton Tuttle (helmet), who ensured that Powhatan stayed ahead of Monacan in shootouts for the 2-1 season-opening victory on Aug. 25, 2021 at Monacan High School. 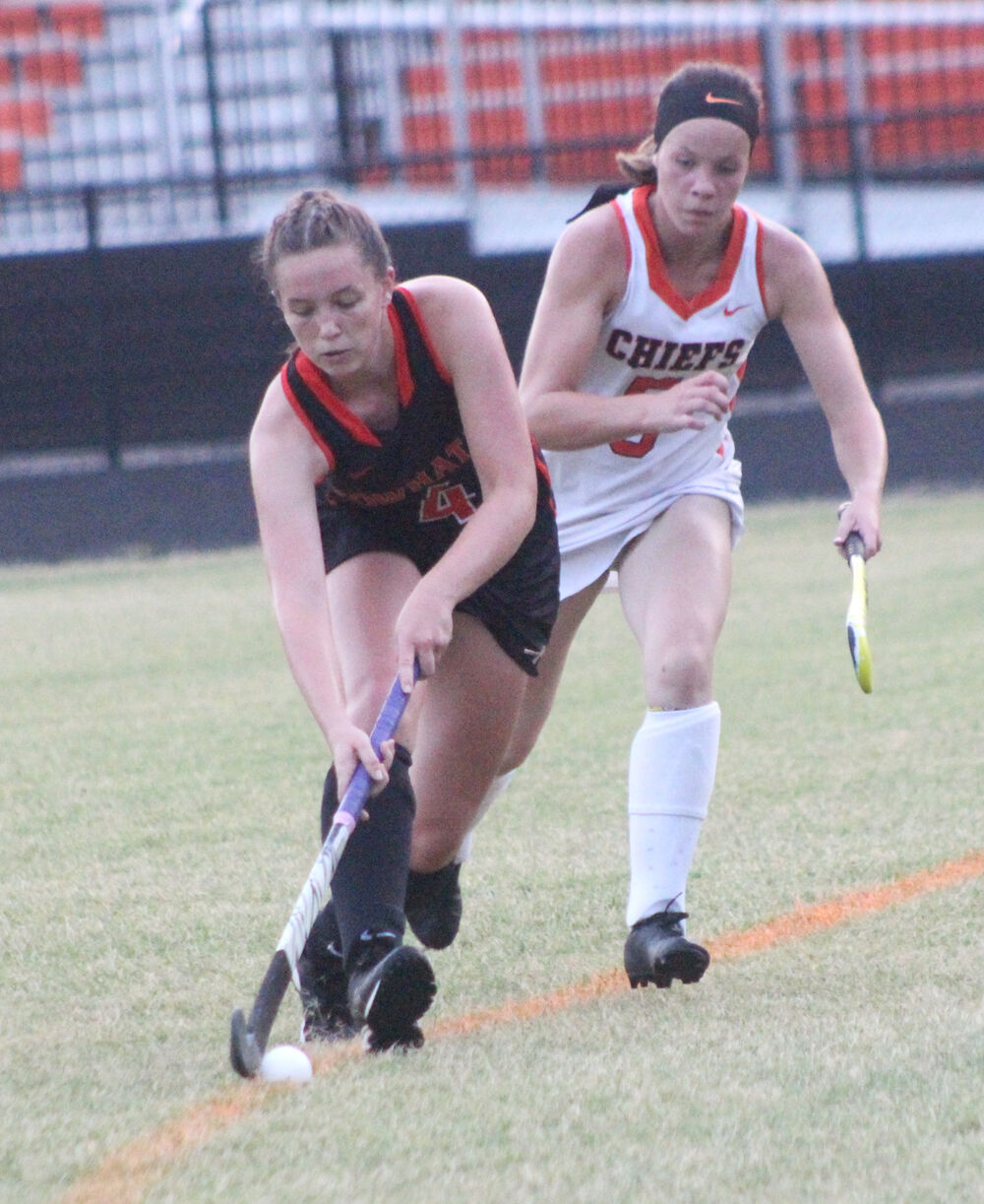 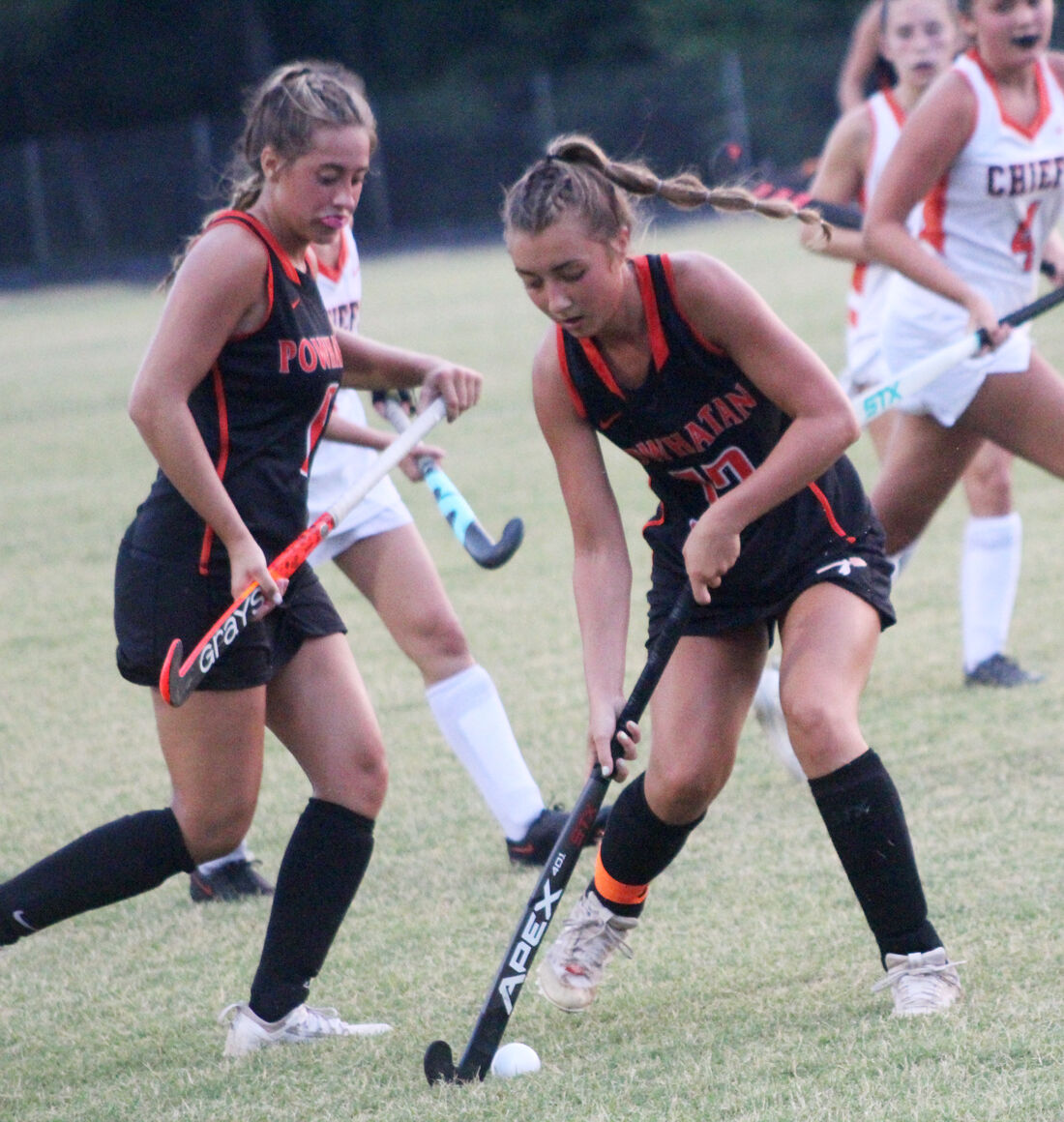 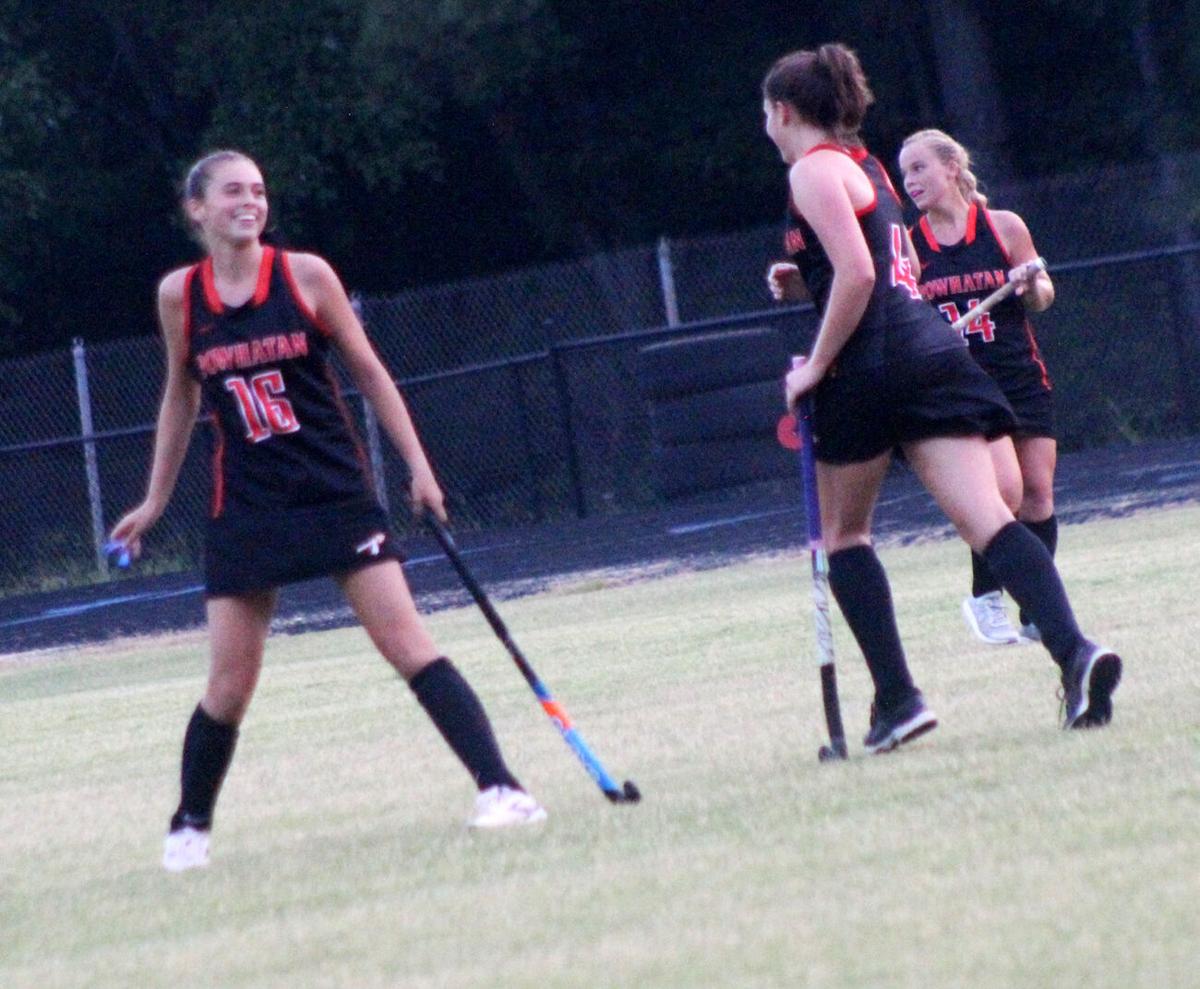 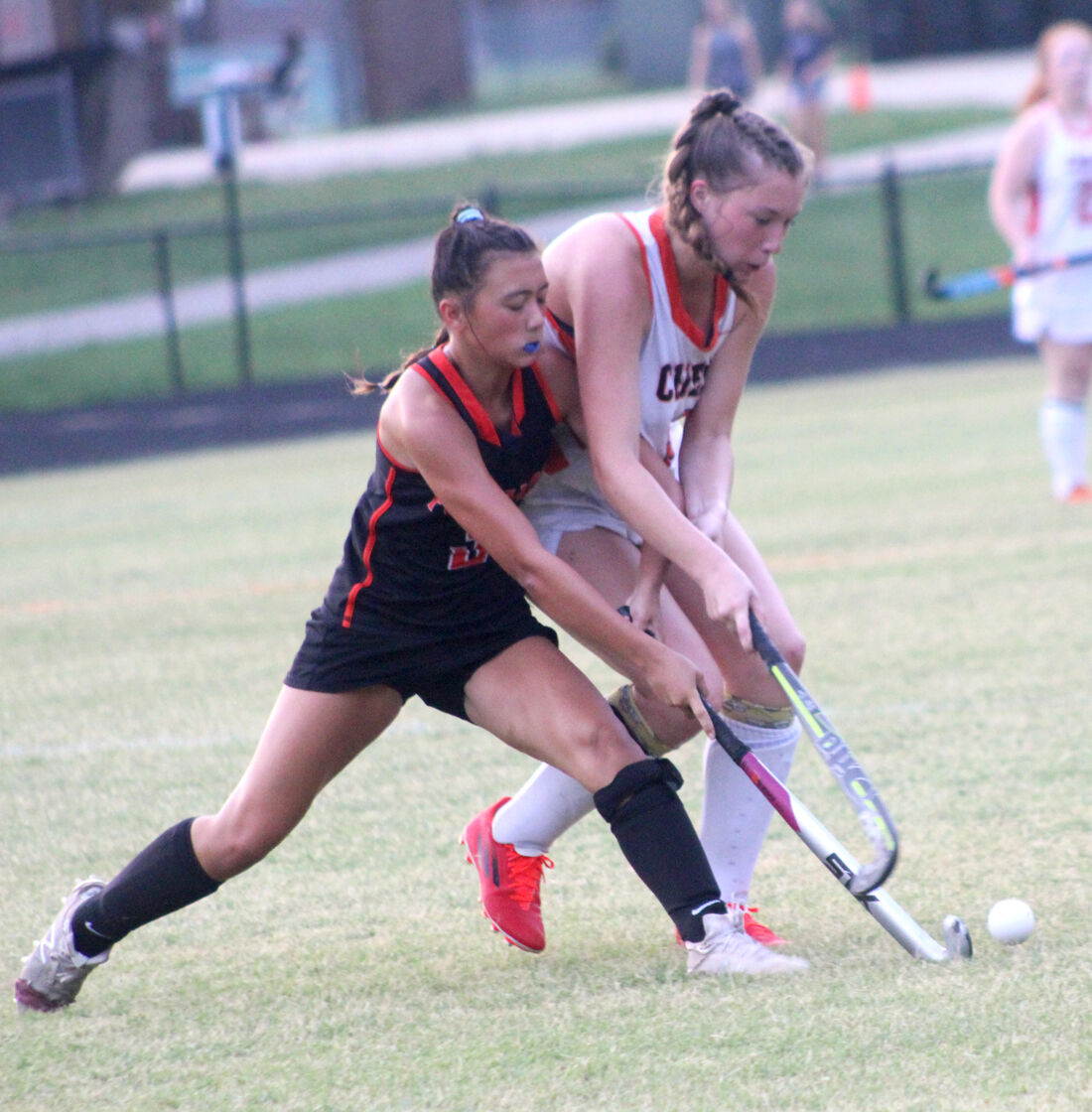 Powhatan field hockey's Erica Krauss (left) battles for the ball in the Indians' season opener versus Monacan on Aug. 25, 2021 at Monacan High School.

CHESTERFIELD – In the opener that ushered in the new season, senior Peyton Tuttle found herself in a familiar situation.

The matchup between her Powhatan Indians and the hosting Monacan Chiefs went all the way into shootouts – the second level of overtime in field hockey – on a 1-1 tie. But Tuttle already had experience playing in goal during that extra period, especially in 2019 when Powhatan played in a whopping four games that went to shootouts and won three.

She built on that foundation even further on Wednesday night. After surrendering two shots to the Chiefs, her coaches saw her learn from her mistakes. While her facing the last three of Monacan’s five players during the 1-v-1 period, she stayed up, used her quickness and worked to force her opponents into making a mistake.

And with Powhatan leading the period 3-2 and the Chiefs’ fifth and final player looking to tie it up and force another level of overtime, Tuttle ran up to meet her and mirrored her step to the right. She stayed wide, and her opponent slammed the ball to Tuttle’s right side.

Tuttle had pushed out far enough. The shot flew wide right of the goal. Powhatan’s players erupted into cheers and ran out to embrace their goalie in a jubilant celebration of their 2-1 season-opening triumph.

“It always means a lot against Monacan – we always have a tough game with them; they always play us tough,” said Powhatan head coach Stephanie Tyson. “They always play us right down to the end. I don’t know what it is with us and Monacan, but it definitely seems like it’s becoming a rivalry. (Coach Caryn) Rehme and I came out today and said: ‘You’ve got to start strong, because this game’s going to be tough. They’re going to bring it.’”

In her first-ever varsity match, Powhatan freshman Erica Krauss played beyond her years. The first time Tyson saw her play on JV last year as an eighth grader, her impression was: “She is not going to be on JV again next year.”

Erica instantly shined in her varsity debut, flexing her quickness and demonstrating strong control on her drives down the right side. She was also the first of Powhatan’s five players to take Monacan’s goalie head-on in the 1-v-1 shootouts. With finesse, she moved the ball forward, pushed it past her opponent on the left side, and navigated the ball the rest of the way to the back board to give her team a 1-stroke lead in the double-overtime period.

“All I can say is: She’s just a baller. She just has a natural knack for everything. She’s just got athletic ability,” Tyson said. “She also has the ability to just have a burst of speed and take people on, too. Her stick work is phenomenal. For playing one year, I don’t even know how your stick work becomes so amazing, but she works hard, and from what I hear, she works just as hard at lacrosse and she works hard at home. I think she just is a natural athlete and just some kids have it, and she 100-percent has it.”

Tyson praised Erica as a good teammate and pointed to her strong relationship with her sister and teammate Jordan Krauss, who is a senior leader on the team.

“Her and Jordan are really cool to watch together. They are super close; I knew they were a close family, but they are way closer than I ever imagined,” Tyson said. “I think they’re enjoying playing together as a ninth grader and a senior. I think it’s good for Jordan and good for Erica, too.”

Like Erica, Jordan showed finesse as the third player up for Powhatan during shootouts. Jordan got the ball clear of the goalie after they met in the middle, and then she swung and slammed the ball into the box on a long strike to give her team what was ultimately the decisive 3-2 lead in the period.

The second shot for Powhatan was made by sophomore Casey Grell, who had a great game according to Tyson and also had a highlight reel of an adventure to reach the goal during shootouts. She started by air-dribbling the ball towards the goalie, but then took a wallop of a hit as she and the goalie collided.

But Grell emerged on the other side.

And so did the ball.

Grell ensured that it went in.

Tyson noted how Powhatan High School alum and former player Hanna Hathaway used to air-dribble the ball, too, and also how she coached Grell in the skill. Tyson recalled Grell saying: “I’m going to do it, coach.” Her response to Grell was: “Well, do whatever you feel comfortable with.”

“She felt good about it,” Tyson said, “and…you kind of have to be gutsy to try that, too – we’re not used to playing with the ball in the air and moving towards the goal – and you just kind of have to time it and watch when the goalie comes out and you’re hoping that you can just flip it over her head, but it was a little bit more of a collision, and luckily we came out on the positive end with that one.”

Monacan’s first two shots made it in during the extra period – including one on a penalty-shortened strike that sailed over Tuttle's head and into the box – but Tuttle regrouped. The senior held firm against her final three opponents and twice blocked the fourth player’s shots to keep the ball away from the goal.

During regulation, Powhatan initially seized a 1-0 advantage with 4:16 remaining in the first half. Taking hold of the ball on a penalty corner, Grell slammed it to a cluster of her Powhatan teammates who had closed in on the goal, and Emily Reimondo tapped the ball to the backboard for the go-ahead tally.

Powhatan’s defense, which was missing senior leader Catherine Griffith but was led by Tuttle in goal and defenders Savannah Johnson and Izzy Carson, warded off the Chiefs’ bevy of corners in the third quarter. With Carson driving the ball out of the defensive end and Lexi Campbell powering it across midfield to finally clear it out of Powhatan’s territory, the Indians reasserted their pressure on offense, earning back-to-back corners before the end of the third.

Monacan, however, broke through with 1:34 left in the fourth and final quarter of regulation when a shot from senior Natalie Seaton got clipped into the air and smacked the upper right corner of the cage inside the box. The tying strike forced 7-v-7 overtime.

It ended up being 6-v-7 in reality, as Powhatan had a player sit out due to a card (10 minutes) during the OT stretch. But the Indians persevered and remained tied with the Chiefs until the clock hit zero, necessitating shootouts.

The Indians will look to build on tonight’s game as they turn around and face Douglas Freeman on the road tomorrow at 6:30 p.m.

“Not necessarily our best game, but it’s the first game, and we’ve got a lot of things to work on, and a lot of things that we’re going to play with as far as our lineup,” Tyson said. “We’re just going to try get better every day and just move forward from here.”

Powhatan field hockey players celebrate around their goalie Peyton Tuttle (helmet), who ensured that Powhatan stayed ahead of Monacan in shootouts for the 2-1 season-opening victory on Aug. 25, 2021 at Monacan High School.

Powhatan field hockey's Erica Krauss (left) battles for the ball in the Indians' season opener versus Monacan on Aug. 25, 2021 at Monacan High School.