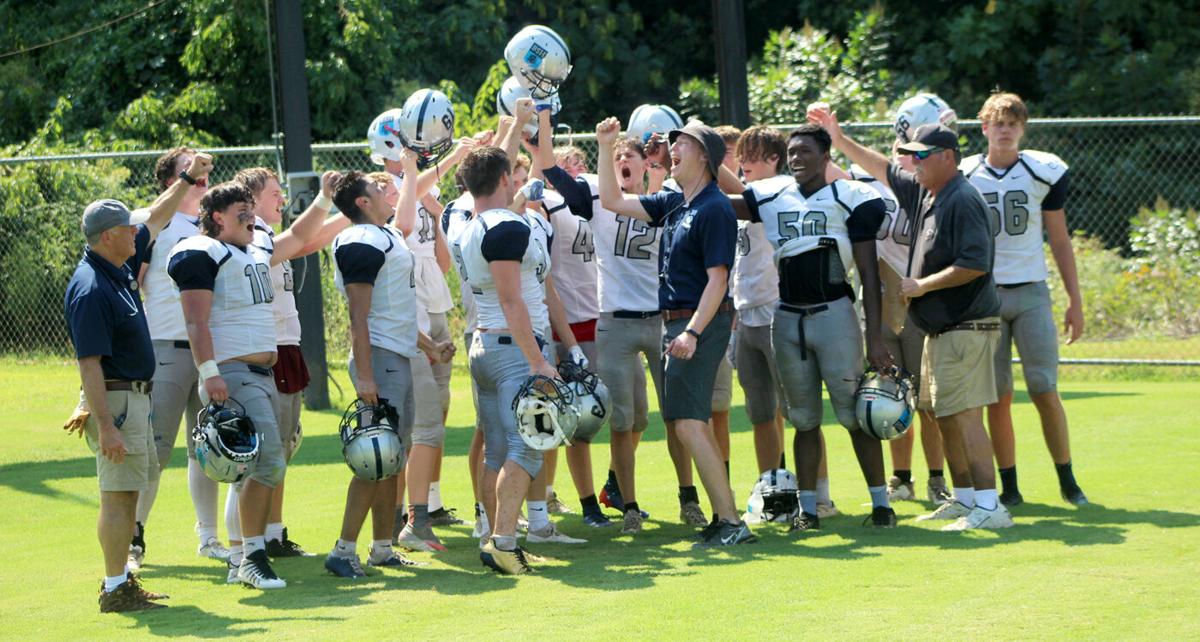 Blessed Sacrament Huguenot football breaks the huddle after defeating Covenant 30-8 on Saturday. The game was called after the first half due to heat. 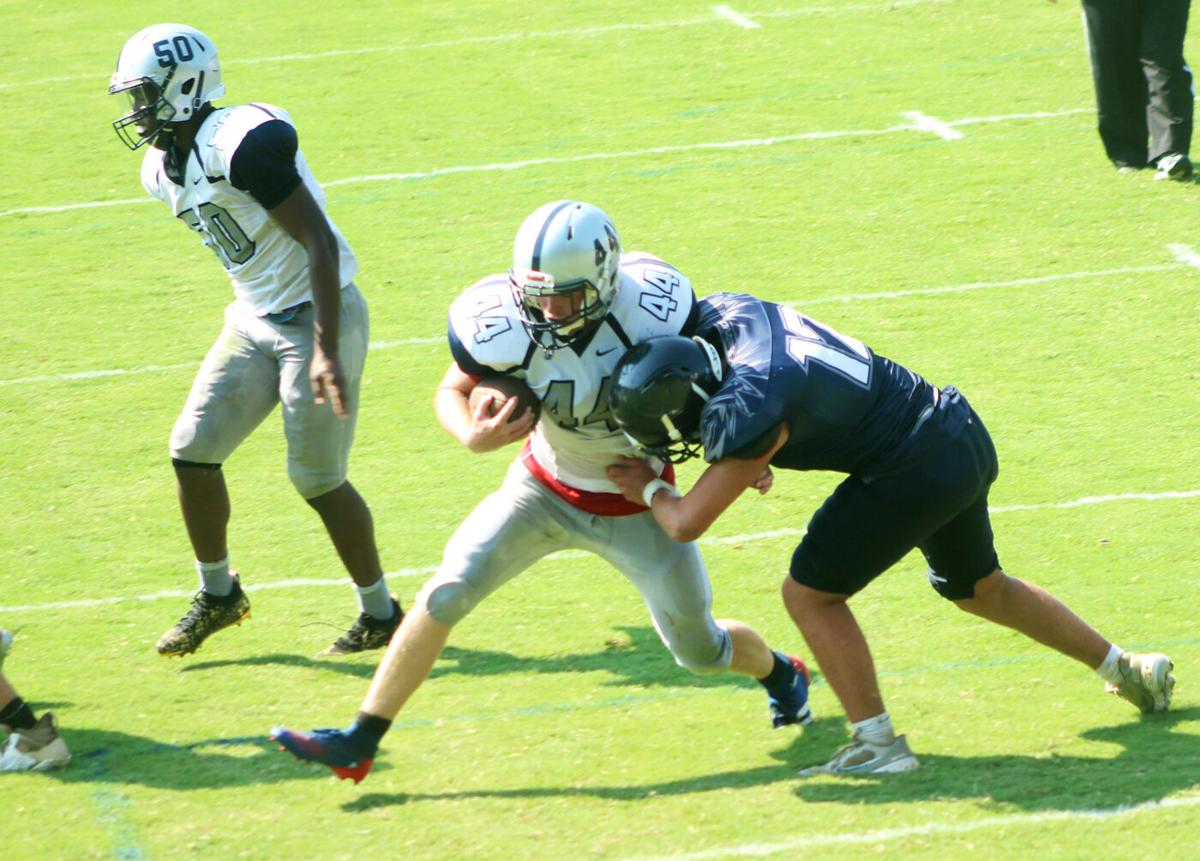 Blessed Sacrament Huguenot's Hunter Case (44) runs the football into the end zone for a two-point conversion during the Knights' fall season opener at The Covenant School on Aug. 28, 2021. 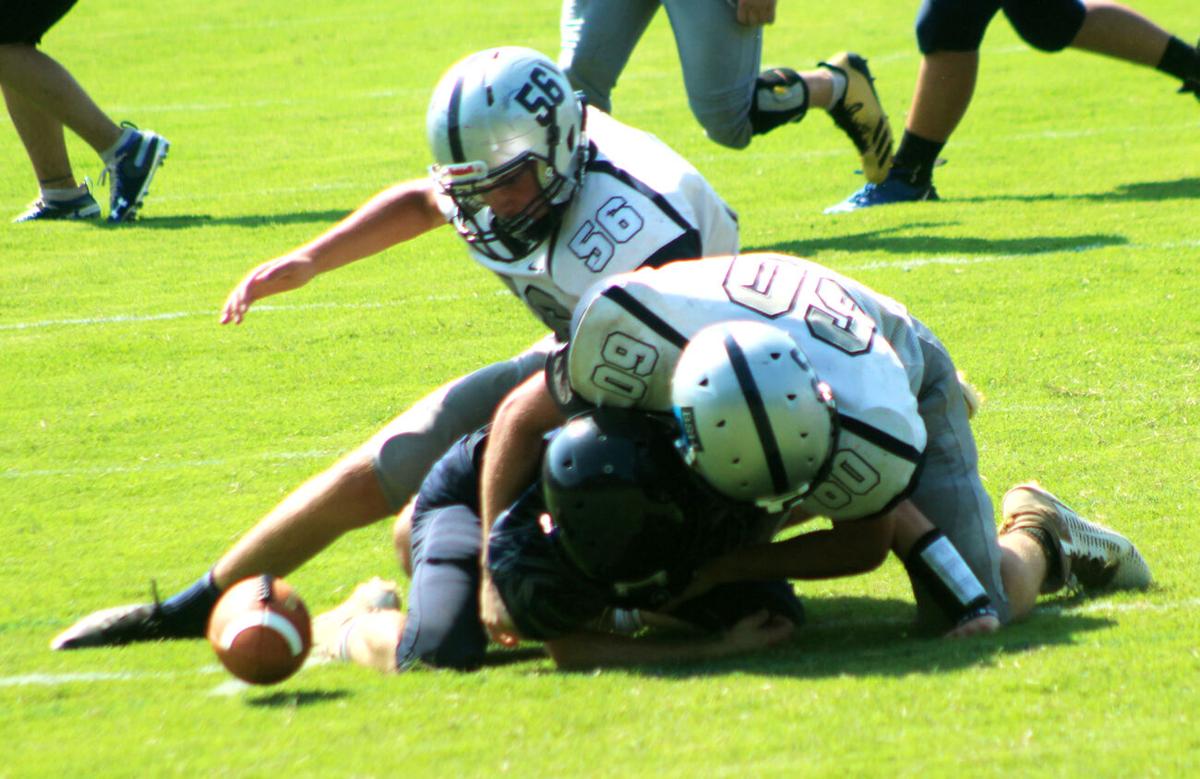 Blessed Sacrament Huguenot's Garrett Musselman (56) falls on the football for a fumble recovery as Nathan Roberts (60) tackles Covenant's quarterback in the Knights' fall season opener at The Covenant School on Aug. 28, 2021.

CHARLOTTESVILLE – When the hosting Covenant Eagles came out at the beginning and Blessed Sacrament Huguenot head football coach Gary Brock recalled it being announced that they were the state champions, he said that it kind gave his players a little bit of an incentive to say: “Not anymore.”

Only one half was played – the officials called the game before the third quarter could start due to heat, a factor that had initially pushed the matchup from 4 p.m. to 10 a.m. today – but for the Knights, it was a dominant stretch. They scored four touchdowns in the two completed quarters to defeat the Covenant Eagles 30-8 and hand the two-time defending state champions their first loss since they joined 8-man football.

“It really means that we’re going to have a good year,” said BSH sophomore running back Hunter Case, who led the team with 92 rushing yards and two touchdowns on just nine carries and added two two-point conversion runs. “It’s a great start…it gives us a lot of confidence to come out here and do this to this team and we’re all ready for the whole season.”

“I knew if we got into kind of a slugfest there, I said: our conditioning’s going to hold up in the second half,” Brock said. “As it was, we were able to parlay some of that in the first half…and our kids did a great job up front.”

The Knights excelled on the ground as three different backs – Hunter Case, Josh Decker and Harrison Lee – accounted for the team’s four rushing touchdowns. In addition to his strong rushing performance, Case also caught a pass for 18 yards. On his first carry of the game and the Knights’ second play of offense overall, Case ripped off a 43-yard trip to the house.

“He’s come along. He was in the weight room religiously all summer long,” Brock said of Case. “It’s showing right now, because he’s playing at an older level really right now.

On one of Case’s runs – a 10-yarder – one of his teammates, David Mann, delivered a pancake block against a defender. Mann added another pancake during his team’s two-point conversion run.

“My guys up front were absolutely making giant holes for me,” Case said, “and getting up in the hole fast is key to getting those good runs.”

Decker, a senior, ran for 66 yards in the half and pushed across the goal line on a short rush to propel the Knights back into a 14-8 lead after Covenant initially responded to the visitors’ first touchdown with a 14-yard TD pass from Stephen Burton to Chase Champbell. Lukas Sanker caught the two-point conversion for the Eagles.

The Knights’ two-point conversions were made by Case, who had two, and Will Fichter, who had one.

Case and Lee ran in the final two touchdowns for BSH from 7 and 22 yards out, respectively.

Lee also contributed multiple pass breakups, and both defense and special teams got the ball back for the Knights at pivotal times. Right after Case’s second touchdown play, his teammate Gage Smith pounced on a botched return by the Eagles on the Knights’ short kick and made it back-to-back possessions for the visiting team’s offense.

Following the touchdown drive capped by Lee’s big run, Covenant’s quarterback fumbled while facing pressure from Nathan Roberts, and Roberts’ teammate Garrett Musselman swooped in to fall on the football and switch possession back to the Knights.

When it came to dealing with the sweltering heat on Saturday morning, Case said: “We’re very well-hydrated, we condition a lot every day and we came out here and played a great game.”

“It was a good, solid effort by our kids, and I’m just really proud of them,” Brock said, adding: “We’ve just got to continue on…use this as a stepping stone here and see what we can do next week.”

BSH (1-0) will seek its second straight win at home versus Broadwater Academy on Friday, Sept. 3, at 7 p.m.

Blessed Sacrament Huguenot football breaks the huddle after defeating Covenant 30-8 on Saturday. The game was called after the first half due to heat.

Blessed Sacrament Huguenot's Hunter Case (44) runs the football into the end zone for a two-point conversion during the Knights' fall season opener at The Covenant School on Aug. 28, 2021.

Blessed Sacrament Huguenot's Garrett Musselman (56) falls on the football for a fumble recovery as Nathan Roberts (60) tackles Covenant's quarterback in the Knights' fall season opener at The Covenant School on Aug. 28, 2021.