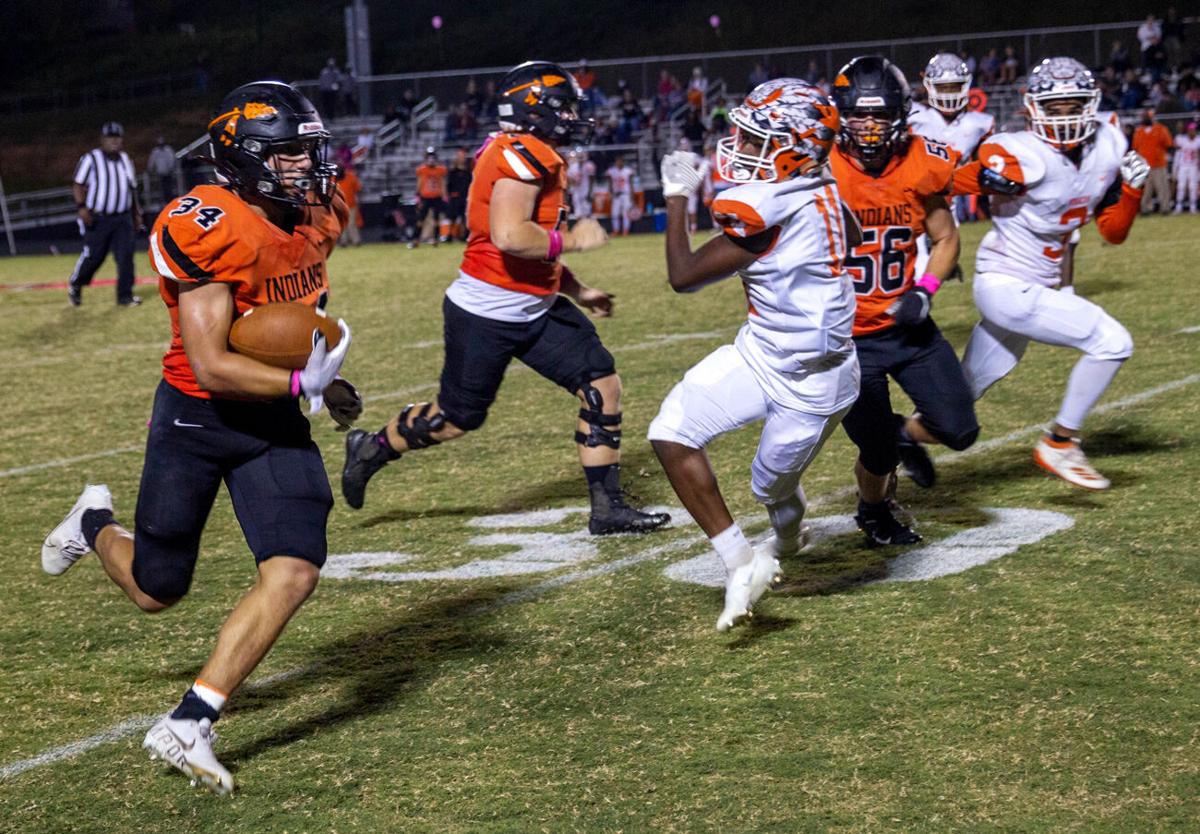 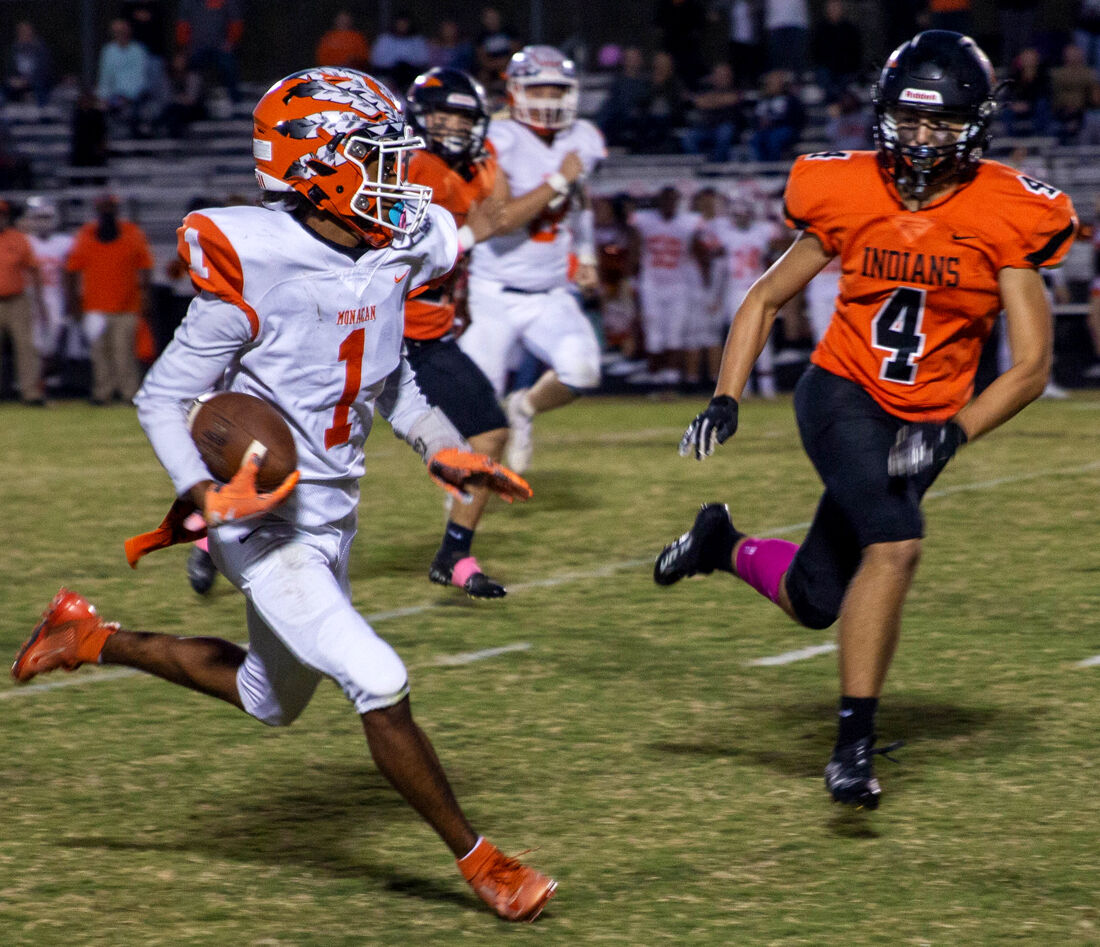 Monacan's Ghalil Lee (1) runs past Jason Worthington (4) and the entire Powhatan defense for a 48-yard touchdown in the first quarter for the Chiefs' first touchdown of the game in the 39-28 loss to the Indians on Oct. 1, 2021.

By Billy Fellin, For the Powhatan Today

POWHATAN -- Mitchell Johnson was not an easy assignment for the Monacan defense on Friday night at James Woodson Stadium. The Powhatan High School senior running back broke tackles, spun his way through holes and bowled over defenders for 202 yards and four touchdowns as the Indians took down the Chiefs 39-28 in Dominion District action.

“We all knew this was a big game,” Johnson said. “We expected them to play hard. The line and the receivers, from the beginning of the game, were blocking really well and just playing their tails off. It’s all to them.”

Following a fumble by Monacan (2-2) on the opening kickoff, Johnson put Powhatan in short-field range with three straight runs.

From there, quarterback Dylan Trevillian found receiver Ethan Dowdy on an 8-yard touchdown pass to help the Indians lead 7-0.

It was the first touchdown of three on the night for Trevillian, whose 187 yards passing almost matched Johnson’s 202 rushing yards to give crucial balance to Powhatan's offense.

Monacan answered right away with a 48-yard touchdown pass from A.J. Lynch to Ghalil Wells and a two-point conversion that gave the Chiefs an 8-7 lead.

Two drives later, Johnson took a screen pass from Trevillian 53 yards for the score and a 14-8 lead at the start of the second quarter. That lead would last through the end of the half.

Out of the break, the Indians wasted no time continuing their hot streak. Trevillian hit Jason Worthington for a 20-yard score and a 20-8 lead.

After Monacan failed on a fake punt attempt to convert on 4th and 5, Powhatan took advantage of the short field and Johnson scored from 3 yards out.

The Indians’ offense wasn’t on the sidelines long after that score, as Worthington jumped a route to intercept Lynch on the Chiefs’ first play on the ensuing drive and ran the pick back to Monacan’s 18-yard line.

Johnson scored two plays later for a 26-8 lead after a failed two-point conversion.

The Chiefs had their biggest play of the game right away as Lee Wells took the ensuing kickoff 92 yards for a score.

Johnson scored his fourth touchdown of the night on the ensuing drive for a 39-14 lead.

Monacan’s offense made short work of the Indians’ defense on its next drive, needing just five plays to score on a Keshawn Jefferson 1-yard run, cutting the deficit to 39-22 after a successful two-point conversion.

Lynch threw his second touchdown of the night to K.J. Johnson to make it a 39-28 game with 48 seconds left. The Chiefs attempted an onside kick, but Powhatan recovered it and was able to kneel away the rest of the clock to seal the victory.

“We’ve been trying to get past (Monacan) for quite some time, so it’s a big win for the program,” Henderson said. “We had a great week of practice and we played well. It means a lot to us.”

For Monacan, Lynch threw for 207 yards and two touchdowns with the interception. Monacan rushed for 107 yards on the ground in the game.

The Chiefs will host Cosby on Oct. 8, while Powhatan will host James River on Homecoming.

Johnson hopes that the momentum from the win against the Chiefs will carry over to the matchup with the Rapids.

“The momentum this gives is incredible,” he said. “We’re all hyped and we’re going to use this as fuel. I think we’re going to play the rest of the season out very well.”

Monacan's Ghalil Lee (1) runs past Jason Worthington (4) and the entire Powhatan defense for a 48-yard touchdown in the first quarter for the Chiefs' first touchdown of the game in the 39-28 loss to the Indians on Oct. 1, 2021.