Powhatan High School junior Kendal McMullin takes a shot on goal in a varsity girls lacrosse home game versus Monacan on May 3, 2021. 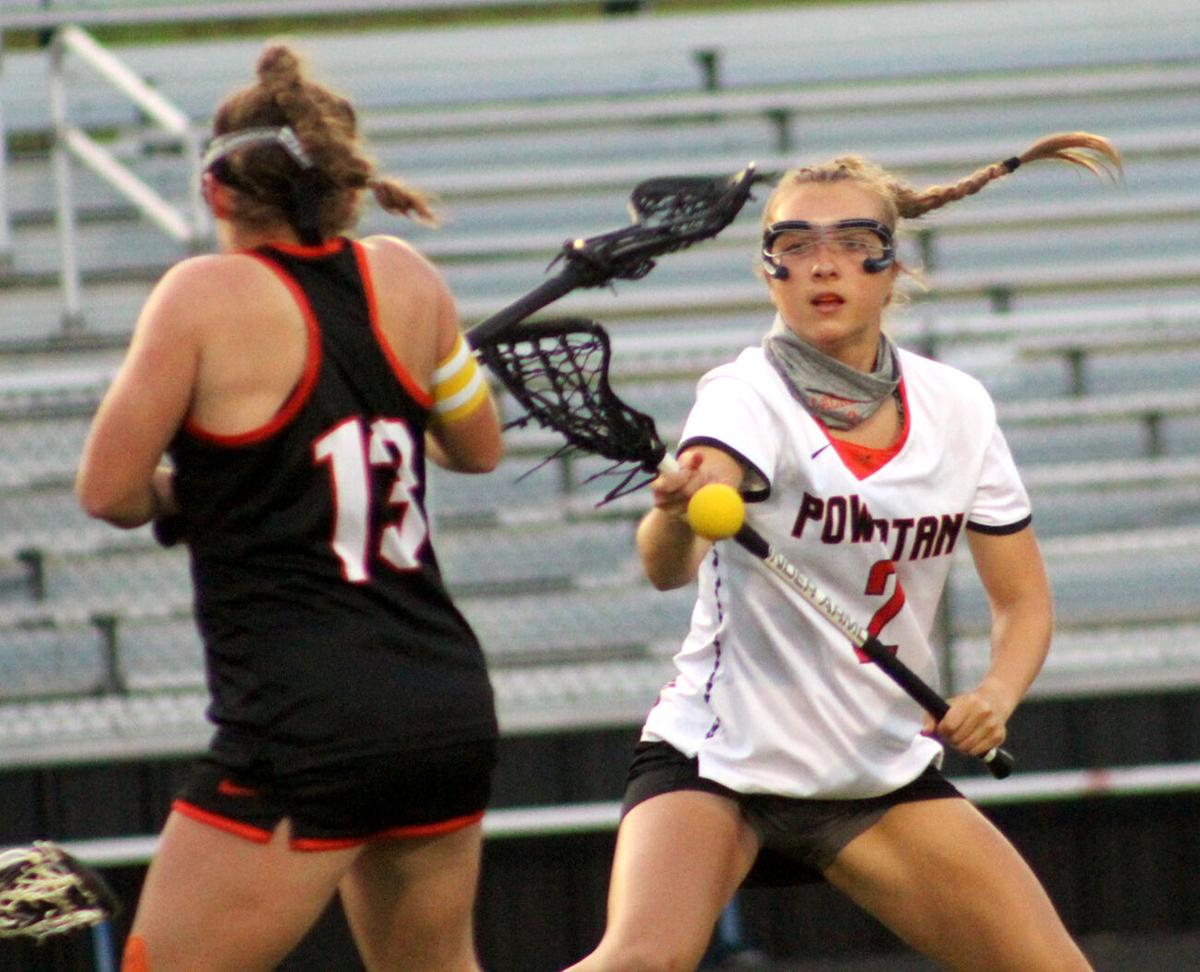 Powhatan High School junior Jordan Krauss (right) contends with Monacan's Natalie Seaton for the ball on a draw in a varsity girls lacrosse home game versus Monacan on May 3, 2021. 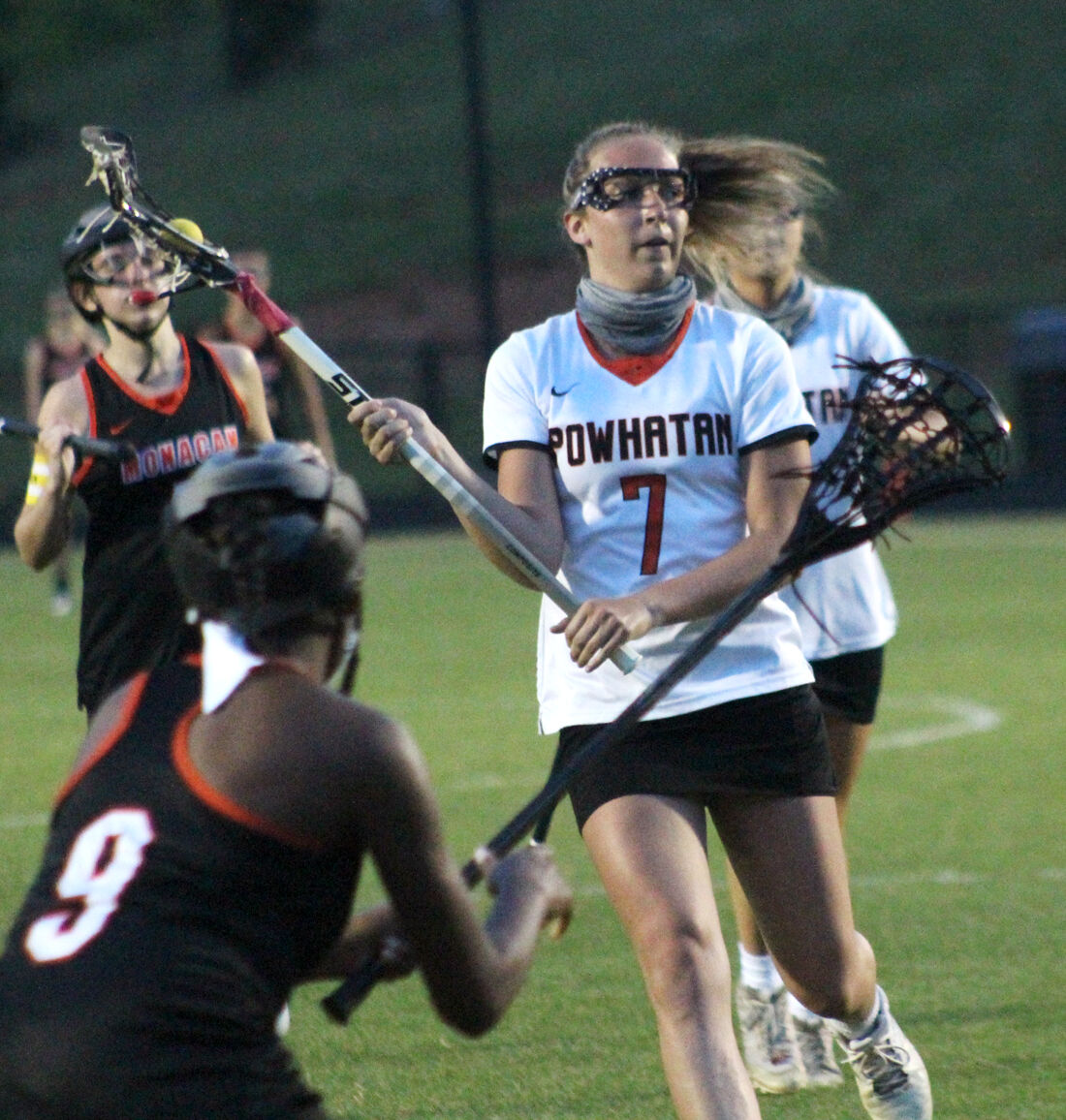 Powhatan High School sophomore Lexi Campbell (7) carries the ball in a varsity girls lacrosse home game versus Monacan on May 3, 2021.

POWHATAN – The young Powhatan girls lacrosse team, featuring only one senior this year, continued to showcase its talent and growth with Monday’s 22-9 rout of Class 4, Region B opponent Monacan.

“I couldn’t be happier with our team right now. They are young, but they work so well together,” said head coach Laura Camp. “We have so much depth. We have so many scoring threats. Our defense is becoming stronger and more unified and I’m super happy with the way things are going right now.”

After she established herself as a leading defender on Powhatan’s varsity volleyball team, Kendal McMullin, who had also had a strong offseason for lacrosse going into the spring of 2020 before that season was shut down by COVID, has shined so far at midfield this year. She handled a majority of the draws and scored 7 goals in Monday’s game.

“Kendal’s a natural leader, and she just is a great role model for her teammates because she puts in 200-percent effort at all times,” Camp said. “She’s fast, she’s athletic, she’s positive and…that’s who you want as a leader on the field, is someone who exemplifies the characteristics that you want everyone else to follow, and that’s Kendal.”

Christopher Newport University commit Jordan Krauss not only racked up 6 goals, but she tallied up a team-leading five assists. She also excelled in exerting pressure on Monacan’s goalie, forcing several turnovers when she guarded the goalie’s attempted clear-outs or passes to her teammates.

“I’m just proud of Jordan. She is such a calm and collected and smart player,” Camp said. “She is a tremendous leader on the field because she helps set the pace of the game down on offense and really is like our quarterback down there.”

Sophomore Lexi Campbell scored 4 goals, and Sophie Payne had 2. Adding 1 each were Sam Flippo, Kate Adams and freshman McKayla Brasswell. Freshman Grace Hayden succeeded multiple times at transitioning the ball from defense to offense and connected well with Brasswell on passes across midfield.

Powhatan pulled away early to lead 6-1, but after a timeout, Monacan found a rhythm and tightened the Indians’ lead to 8-6, with Natalie Seaton scoring four of her team’s first six goals, and Moriah Glidden netting the other two. But Powhatan identified the Chiefs’ offensive threats and shut them down.

Powhatan took control from there, bolstering its lead to 13-6 at halftime and going up by 10 goals with about 19 game-time minutes remaining.

“We’ve been working on defense and our positioning, and I feel like they really applied what we’ve learned the last week,” Camp said. “They just started coming together as a team and communicating.”

Despite the loss, Seaton had a standout performance, scoring 7 of Monacan’s 9 goals on Monday.

Powhatan High School junior Kendal McMullin takes a shot on goal in a varsity girls lacrosse home game versus Monacan on May 3, 2021.

Powhatan High School junior Jordan Krauss (right) contends with Monacan's Natalie Seaton for the ball on a draw in a varsity girls lacrosse home game versus Monacan on May 3, 2021.

Powhatan High School sophomore Lexi Campbell (7) carries the ball in a varsity girls lacrosse home game versus Monacan on May 3, 2021.