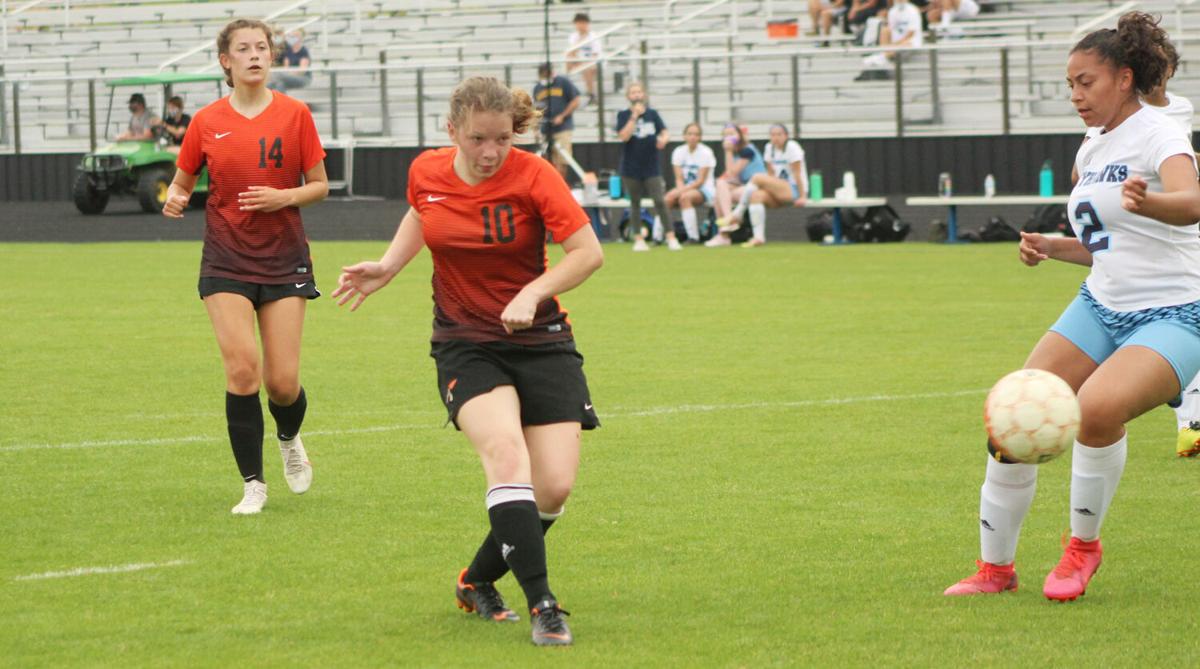 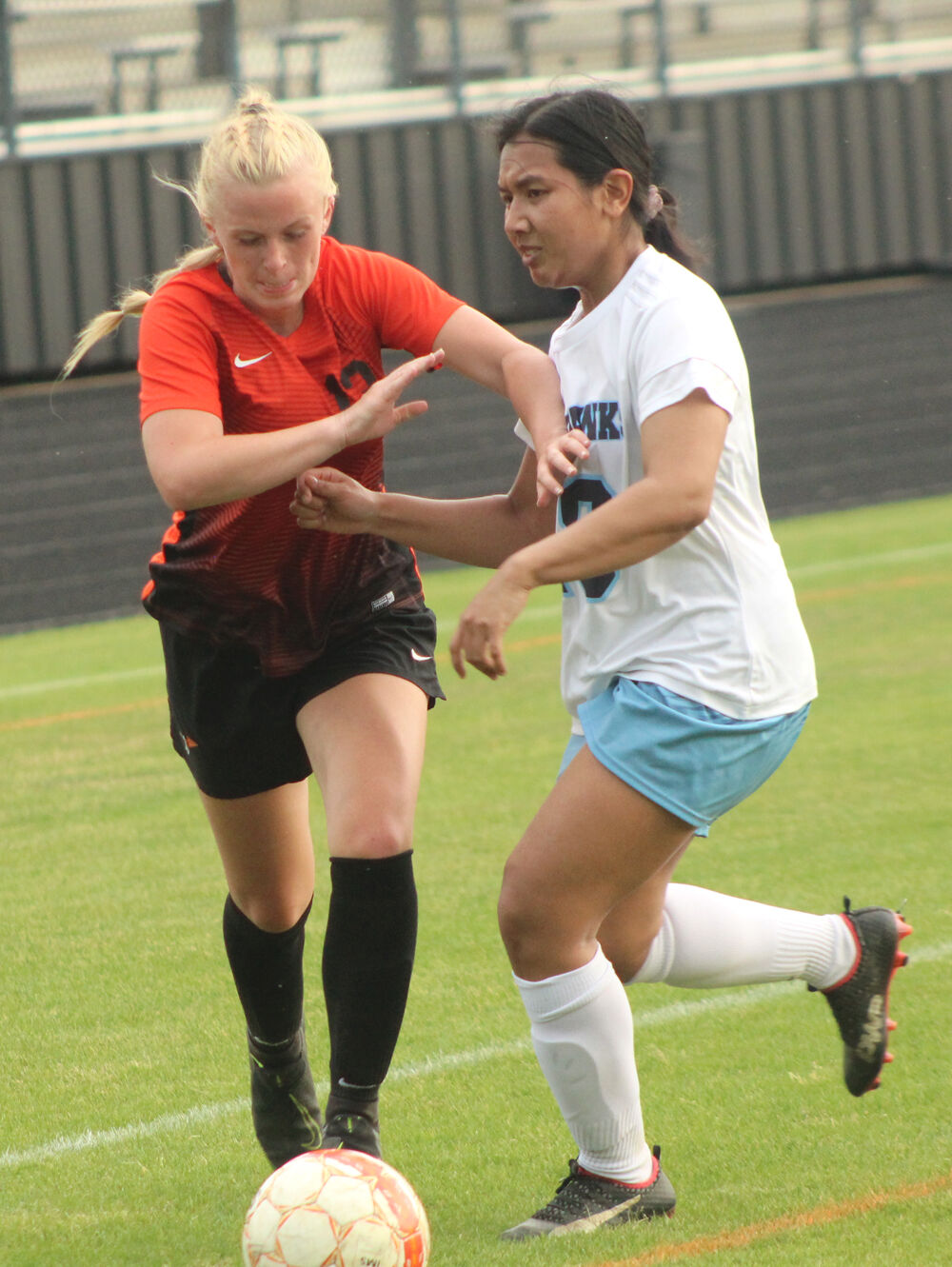 Powhatan High School senior Sarah Amiss (left) fends off an L.C. Bird defender to keep possession of the ball in a varsity girls soccer game at home versus L.C. Bird on April 29, 2021. 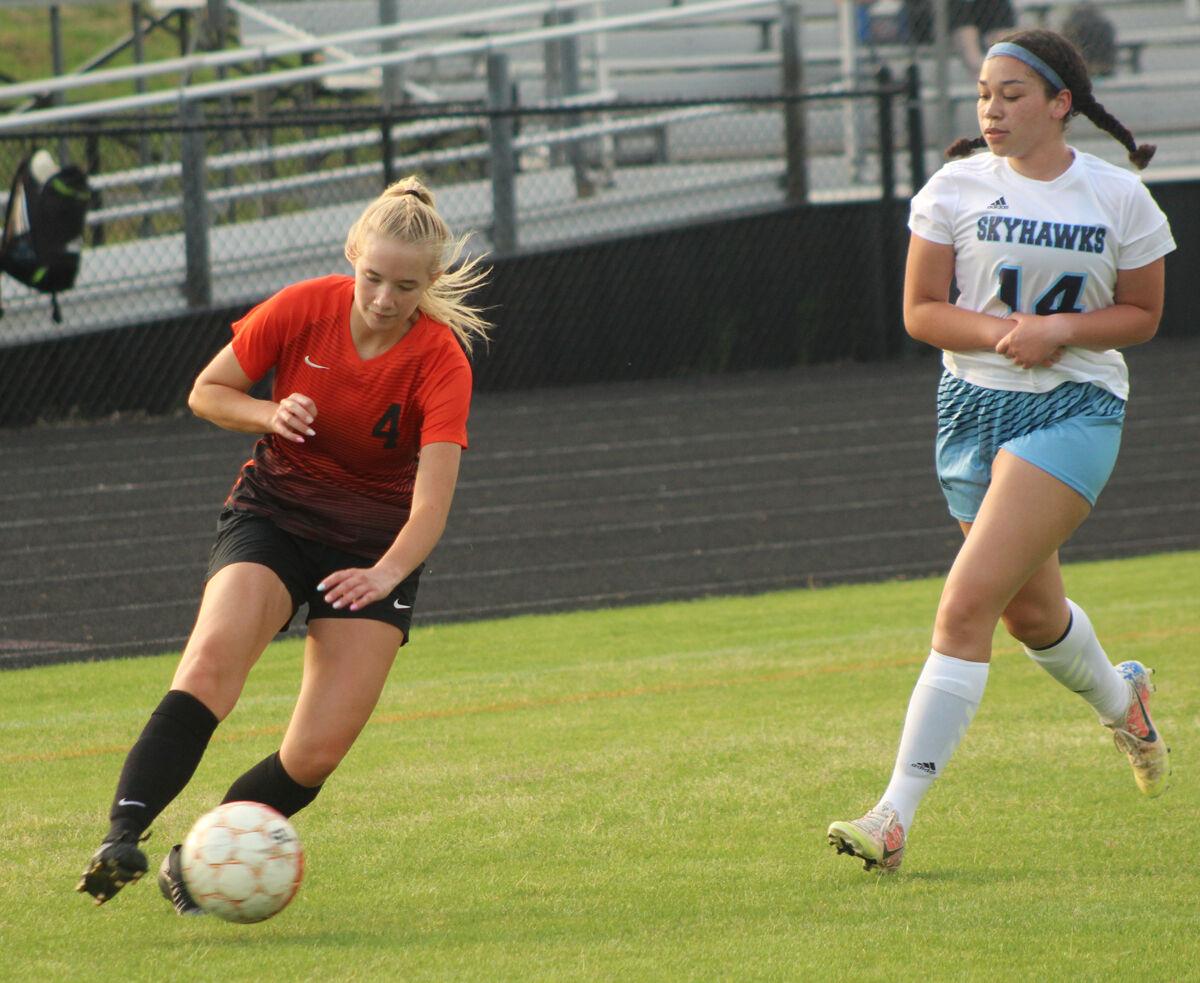 Powhatan High School senior Sarah McFadden (left) drives the ball towards the goal in a varsity girls soccer game at home versus L.C. Bird on April 29, 2021.

It was their second game back on a varsity field since the COVID-19 pandemic first gripped the nation last March, as well as their first game back on their own home field.

It was also the trio's Senior Night - and as their coaches, teammates, friends, families, administrators and supporters celebrated the night along with them, the three seniors, through their own efforts, made sure they had even more to celebrate.

Amiss, McFadden and Smith were the three leading scorers in Powhatan girls soccer's 10-0 rout of L.C. Bird. Amiss and McFadden each notched the hat trick with three goals apiece before first half's end, and Amiss broke through for two goals in the second half - one she scooted through the goalie's legs, and the other she arched into the left corner of the goal.

"Amiss and Smith and McFadden are just delights, man. They're great," said Powhatan head coach Jared Rottmund, who added that they've been in the program since 2017. "They're great leaders. Going into this Dominion District with them, I'm excited. But I will certainly miss them after the season's over."

Joining the three seniors in scoring on Thursday night against Bird were freshman Mara Rutkai and sophomore Morgan Oliver with one goal apiece.

While Powhatan this year is very young, the team is stacked with talent. There are just seniors and three juniors: Regan Baltz, Meghan Hodge and Lena Parker. The rest of the team features eight sophomores and five freshmen - more freshmen than Rottmund said he has ever had.

He praised the team's speed and ability to connect, and as the season progresses, he's looking for the players to come together and play well as a team.

Thursday's win marked Powhatan's first of the season after it fought hard on the road against Cosby, who ultimately won 2-0 over the Indians on Tuesday.

"We have them at home at the end of the season," Rottmund said of the Titans, "and I'm optimistic."

Powhatan will take on two road matches this week with Clover Hill next Tuesday at 7 p.m. and James River next Thursday at 7 p.m.

"The future looks really bright," Rottmund said of his team, "and my future is every game - I'm not looking forward to next season. I'm looking forward to the next game. I feel really, really good. And the girls are great. They're just super.

"I just love coaching at Powhatan," Rottmund said. "It's a great place to be."

POWHATAN – Being an empty nester, even for a short time, was a great feeling for the Powhatan Animal Control staff.

Powhatan High School senior Sarah Amiss (left) fends off an L.C. Bird defender to keep possession of the ball in a varsity girls soccer game at home versus L.C. Bird on April 29, 2021.

Powhatan High School senior Sarah McFadden (left) drives the ball towards the goal in a varsity girls soccer game at home versus L.C. Bird on April 29, 2021.