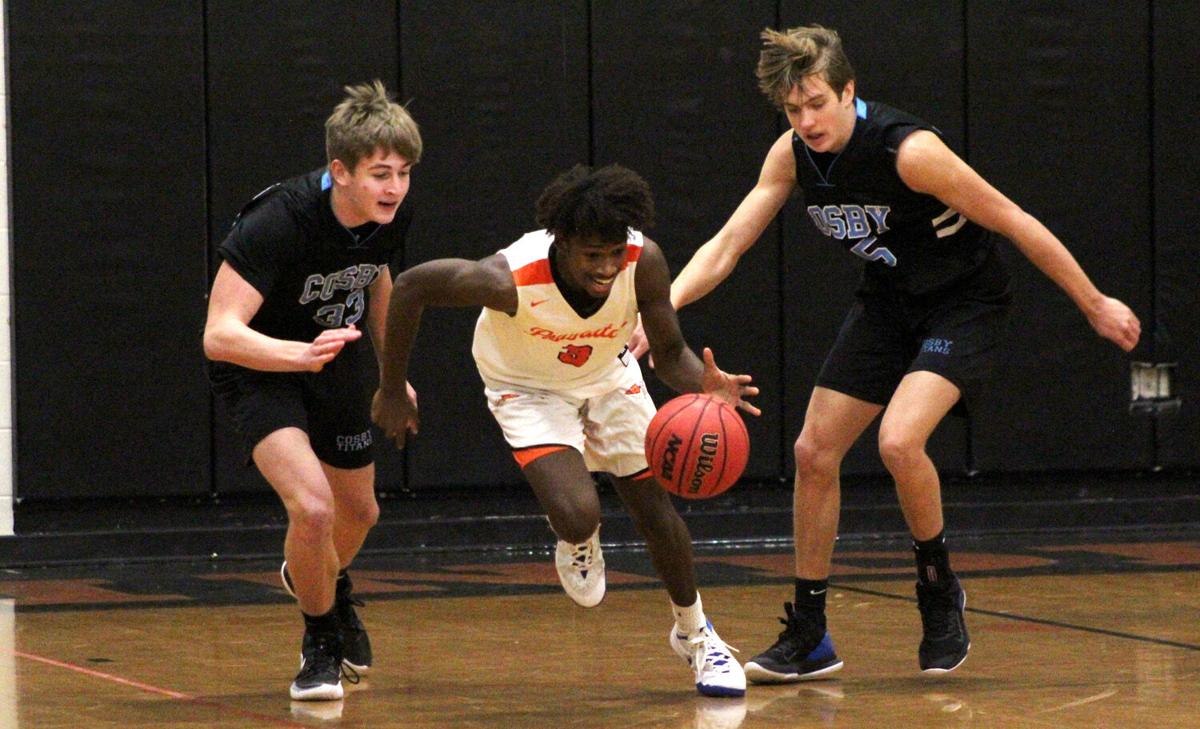 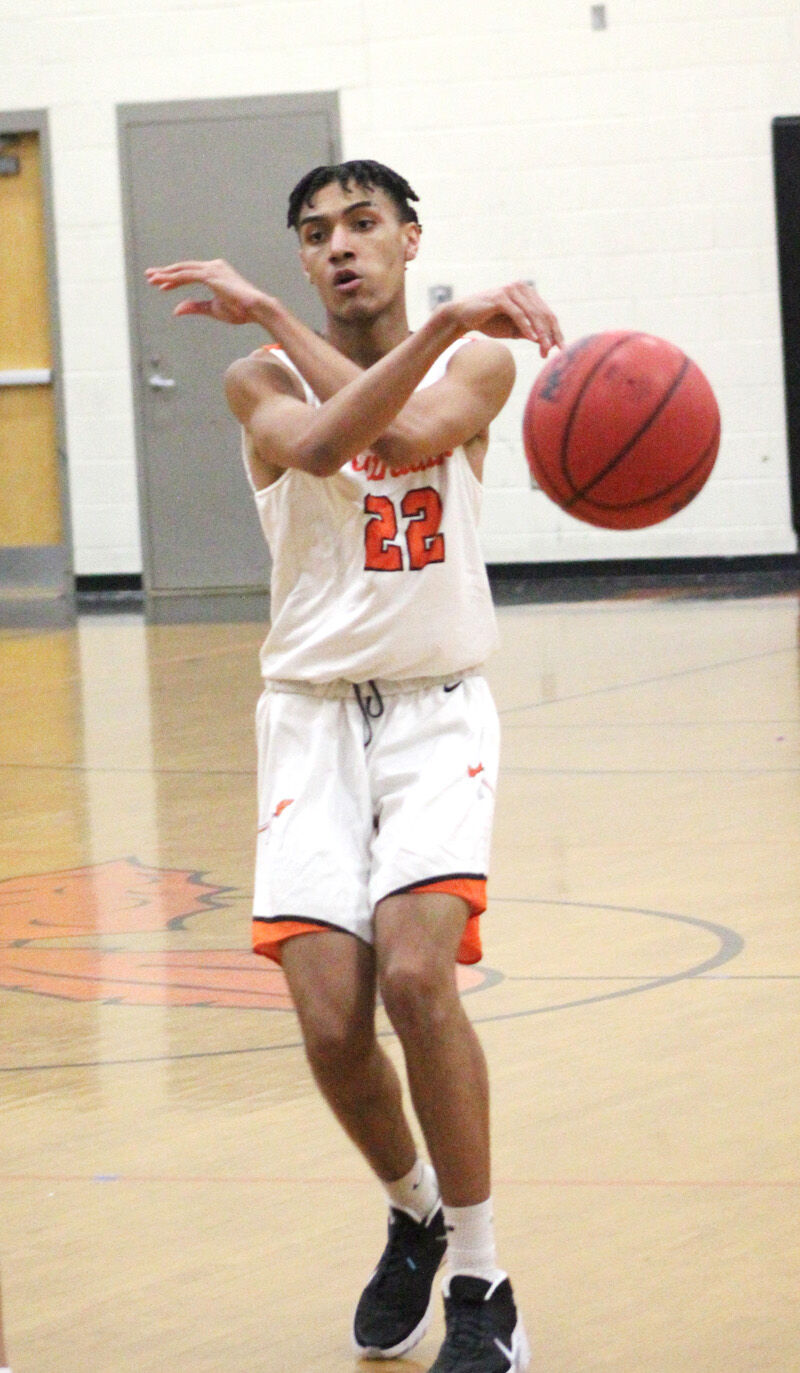 Powhatan High School senior Brylan Rather passes the ball to a teammate in the Indians' Senior Night home game versus Cosby on Jan. 8, 2021. 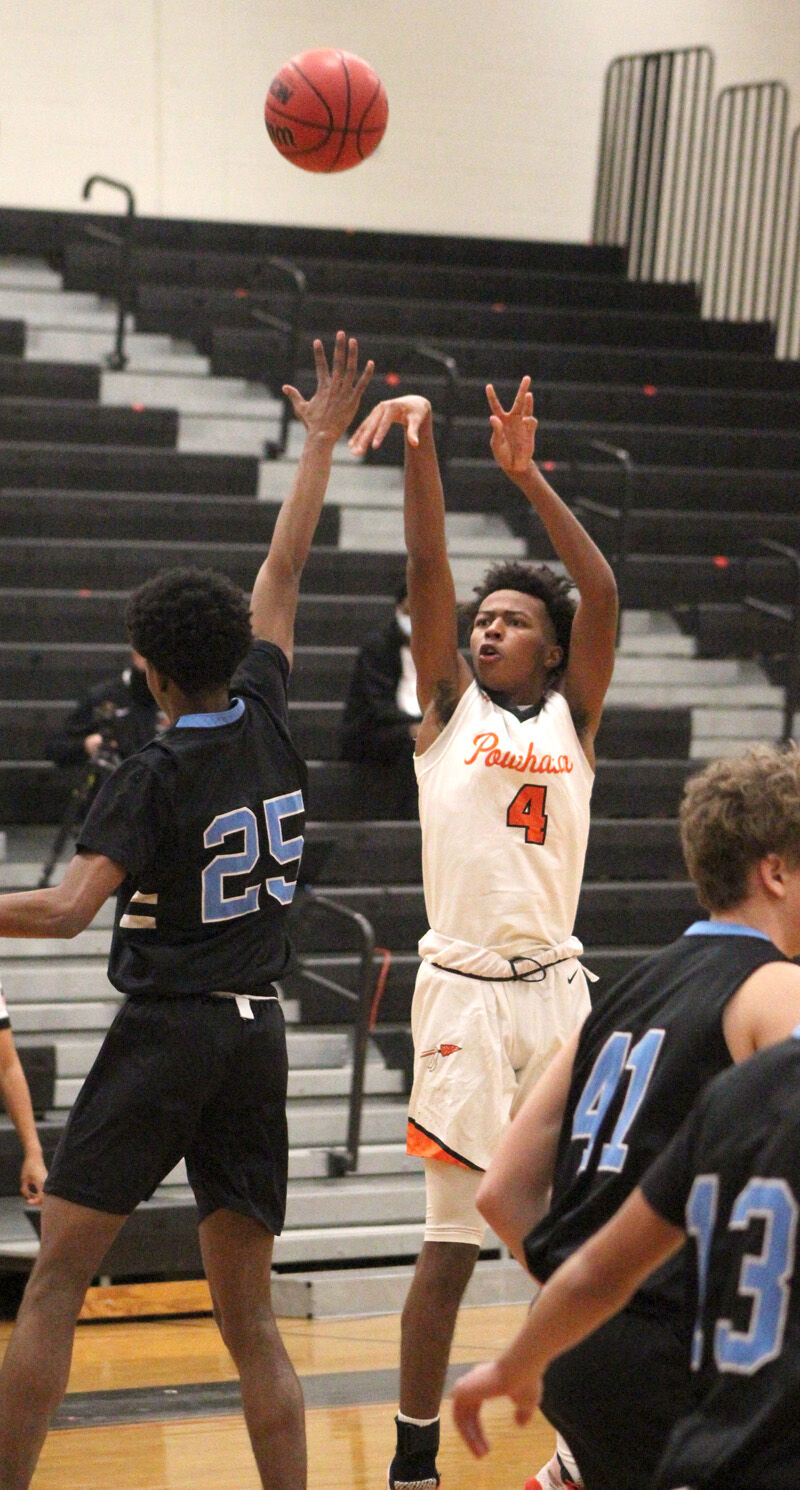 POWHATAN – The timeout was called with about 14 seconds left in regulation. Powhatan trailed Clover Hill in its season opener by 2 points on Wednesday, but the play that made the difference was the last one that head coach Ryan Marable and his team had worked on in practice the day before on Tuesday.

The players were locked in, Marable recalled, and they executed the play to perfection.

They got the ball to senior Brylan Rather, and he knocked down the money shot from behind the arc to put his team ahead by 1.

Clover Hill still had a chance, but Powhatan guarded for 8 seconds and rebounded a tough shot by the Cavaliers.

Powhatan came away victorious, having secured the 64-63 triumph in Wednesday’s season-opening thriller.

“Any win’s a good win, and we were excited to play and excited to compete,” Marable said of Wednesday’s game. “We started off slow and we battled back – we only were leading for 30 seconds in the game – so we kept our composure and we got good shots and we played for each other. We competed and we knocked down shots and we executed the things that we worked on in practice the day before. It was good to get a win.”

Rather had company in leading his Indians in scoring on Wednesday, as he and Matthew Hempfield, who had transferred to Powhatan after playing at Fuqua, each netted 21 points. Powhatan senior L.J. Alston added 16 points in Wednesday’s game.

Friday’s matchup with Cosby not only marked the first home game for the Indians this season, but it was also their Senior Night, which was moved up from their last regular-season home game because of the ongoing COVID-19 pandemic.

The program honored seniors Alston, Rather, Luke Buzzard, Scott Wyman, JaySun Carroll and Aaron Nash prior to Friday's game. The first four also played for Marable last season and have brought both work ethic and leadership to the team. Both Carroll and Nash, who are among Powhatan football’s leaders, have joined the basketball unit this season and are translating their athleticism from the gridiron to the hardwood.

“They’re good kids, and they’re going to be good people,” Marable said of his seniors, praising the group’s potential, quickness and athleticism. “I think they have a lot of growth in them and I’m happy that I got to be in their lives and they got to be in my life.”

Powhatan took on Cosby on Friday and led 33-24 at halftime with the help of a 10-0 run, but bursts of 9 and 6 points in the third quarter put the Titans back in the mix, and the two teams went back and forth. Rather hit a 3-pointer to put Powhatan in a 49-48 lead with 2:11 left in regulation, but Cosby regained control on a 3-pointer from Xavier Harper, a steal, and then a putback from Mason Howard with 1:20 to play. From there, the Titans fended off Powhatan at the free-throw line to win 57-55.

Rather on Friday hit five 3-pointers and led the Indians with 22 points. Alston made four 3s and netted 14. Hempfield scored 12.

“We’ve got so many guys on our team that haven’t played a basketball game since their 8th grade year that when you get in close games like this, the experience rears its head,” Marable said. “Sometimes you’re the bug and sometimes you’re the windshield. We were the windshield on Wednesday night and tonight we were the bug. That’s just the nature of sports and life and we’ve got to wipe that bug off and get ready for tomorrow and get ready for the rest of the season and try to be the windshield more.”

In addition to the players gaining more game time experience as the season goes on, Marable spoke to the importance of the team locking in during practice, sharing the ball and playing for one another.

“We’re so much better when we don’t care who gets the credit and we share the ball, and when a guy messes up, somebody’s there to pick him up – and those types of things that allow teams to be successful,” Marable said.

But for the head coach and his team, it was great to be back on their home court in front of the fans who were able to attend.

“I’m glad to be playing,” Marable said, adding that Powhatan Athletic Director Tim Llewellyn has done “a great job of getting us back and providing the streams for the people who can’t watch it” in person due to state’s limits on crowd sizes for sporting events during the pandemic.

Powhatan plays at L.C. Bird tomorrow at 7:15 p.m. The link for watching tomorrow’s game is as follows: https://youtu.be/cOZVpYkSJyQ

Powhatan High School senior Brylan Rather passes the ball to a teammate in the Indians' Senior Night home game versus Cosby on Jan. 8, 2021.