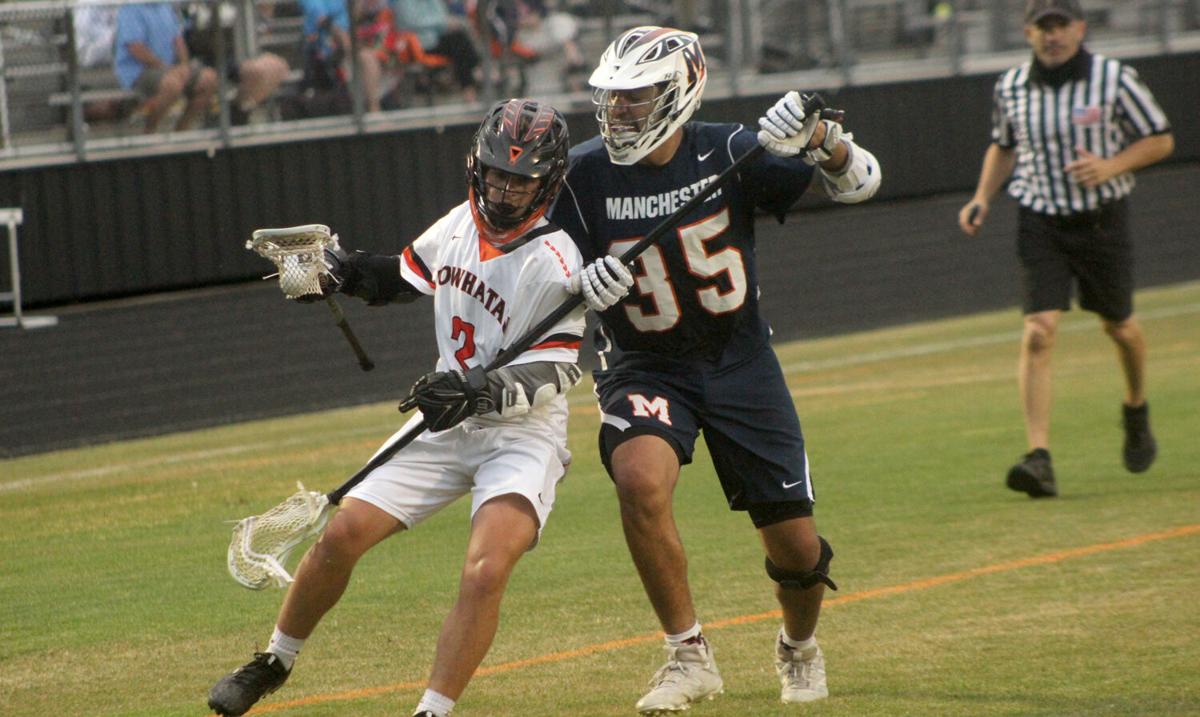 Powhatan's Brandon Palmore (left) fends off Manchester's Brian Nicks (35) while driving towards the goal in a boys varsity game at Powhatan High School on May 24, 2021. 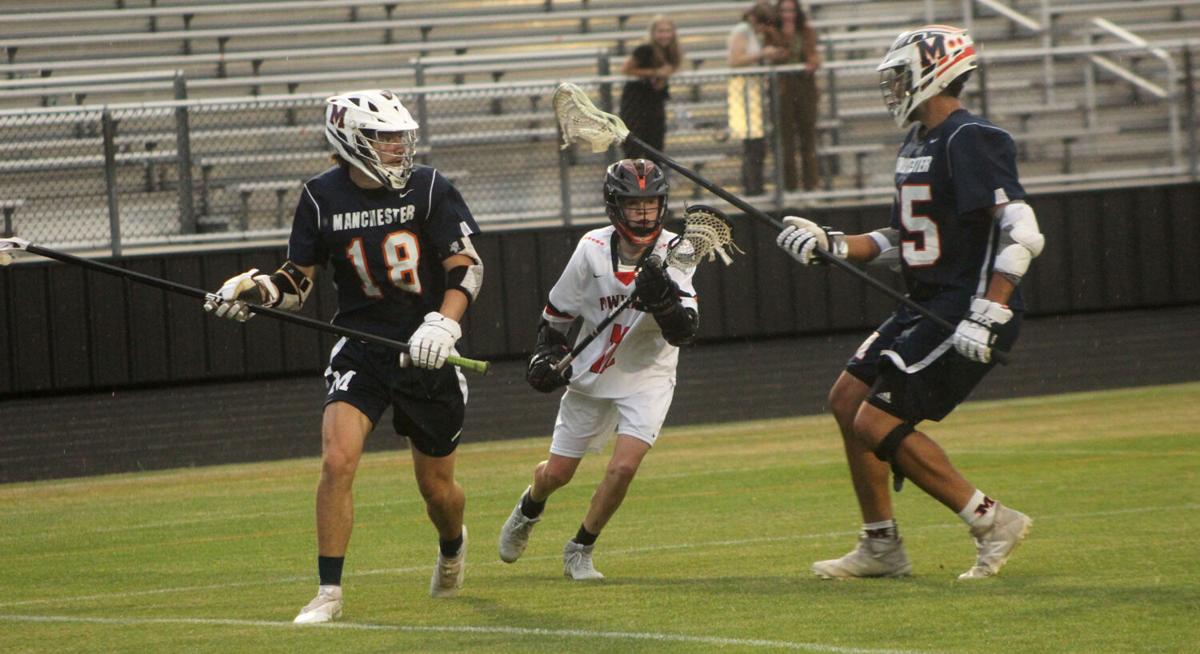 POWHATAN – Powhatan weathered both the on-and-off rain and Manchester’s pressure to close out the 2021 regular season with an 11-7 victory and a record of 6-3. The Indians have also secured their place in the regional tournament.

“It was really nice, especially after the last game we had (against Cosby) where we kind of underperformed and then we let our emotions kind of get the best of us. It was really nice to come out and get a win, finish the regular season, get one more game for the seniors to play,” said Powhatan head coach Joe Niles. “Very proud of how our guys played and how hard they played.”

While possessing the ball, senior Brandon Palmore powered through several hits from the opposing Lancers and came away with 3 goals.

“Brandon’s one of those great kids – I’ve had him for four years now – gives me the same effort game after game after game,” Niles said. “He brings a great attitude to the team, too. He has fun while he’s out there. He’ll definitely be missed.”

Joining Palmore in scoring 3 goals on Monday was freshman Luca Blevins, who made an incredible shot in the fourth quarter when, after positioning himself in front of the goal, he quickly raised his stick, high-pointed a pass from Paxton Sloan and in a split-second flung the ball into the netting.

“Luca…being a freshman, he plays above his years,” Niles said. “He really has a firm understanding of the game. He sees the field so well, and because he’s not a big guy, he’s kind of sneaky, and this is the first time he started for us, and he played really, really well. He made a very strong argument as to why we need to keep him in there for sure.”

Senior Ryland Davis put the Indians on the scoreboard in the opening seconds, and Powhatan never trailed from there. Manchester tied the game briefly at 1-1, but Sloan and Blevins netted the go-ahead and insurance goals respectively, with Sloan and Blevins assisting one another on their tallies. Davis also assisted Brandon Palmore on a goal to make it 4-1, and Palmore finished the first half having netted 3 total to help his team lead 6-2 before the midway break.

Jaden Cabaniss added a goal in the third quarter, and Sloan netted his second of the night off of a transition that was begun by Austin Hurt’s recovery of the ball on the defensive side. Robert Smith brought the pressure to help free the ball from Manchester’s possession and enable Hurt to pick it up.

“I think our defense has been doing very well,” said Niles, who also pointed to the role of Haven Pope on the defensive end.

“Haven Pope – an amazing guy, he was injured for the first part of the season, he had a meniscus problem, then he took a shot the other day and he had bruised his sternum,” Niles said, “but he’s still out there playing and battling. That’s amazing.”

Junior goalie Connor Jeffs continued to make big saves, including one on a laser that he and his team cleared out, eventually leading to Blevins’ spectacular shot.

“Connor is amazing. I remember when he came to me as a freshman and said, ‘Coach, I want to play goal,’ and I said, ‘That’s great; I need a goalie,’” Niles recalled, “and he’s put in so many hours of work and he makes it kind of look easy, but he’s put in thousands and thousands of hours of work and shots and stuff like that. He’s always like: ‘Hey coach, can we work out today?’ (And I’ll say) ‘Yeah, sure, whenever you want to go out, I’ll be there.’”

With the upcoming regional tournament, Powhatan’s next opponent could feature a school from the Charlottesville area.

“A couple years ago we were in the Jefferson District, and so we know a lot of those teams out there - well-coached, super-talented teams,” Niles said. “It’ll be a challenge for us. We look forward to it.”

In reflecting on how well his guys have been playing, Niles remembered recently saying to one of the coaches: “Our guys had not played for a year, and it’s like we finally figured it out over these last few games how to play.”

“It’s kind of come back to us,” Niles said, “and it’s really nice to see the guys get back and really, really do well. Super-proud of how hard they’ve worked.”

Powhatan's Brandon Palmore (left) fends off Manchester's Brian Nicks (35) while driving towards the goal in a boys varsity game at Powhatan High School on May 24, 2021.