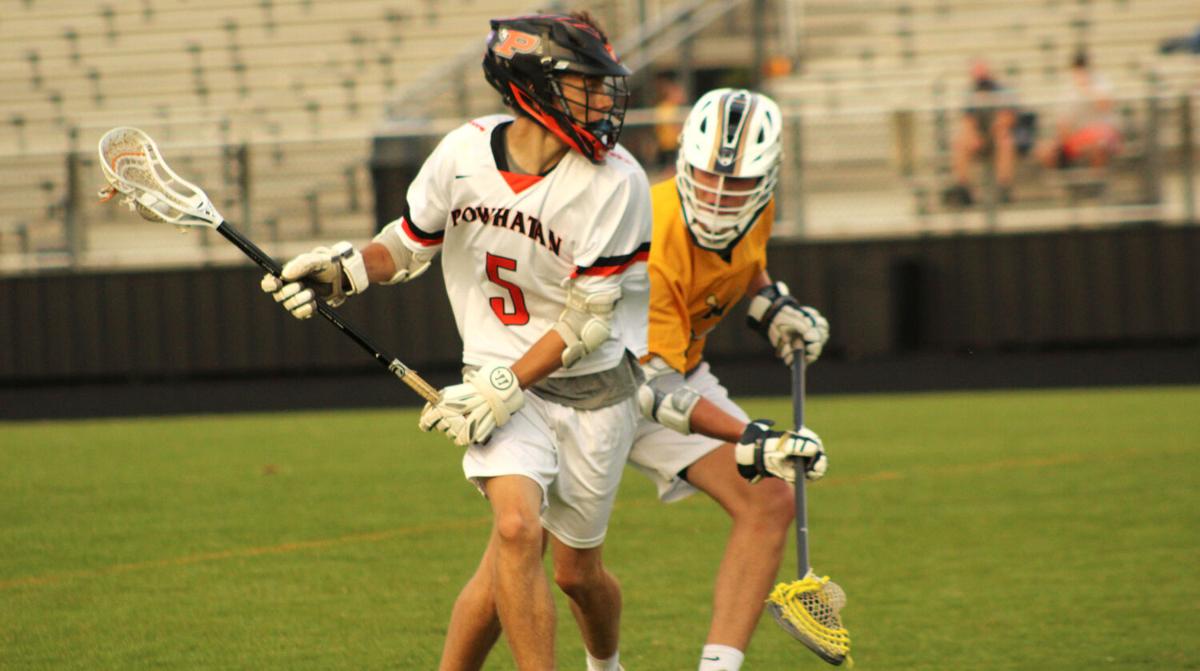 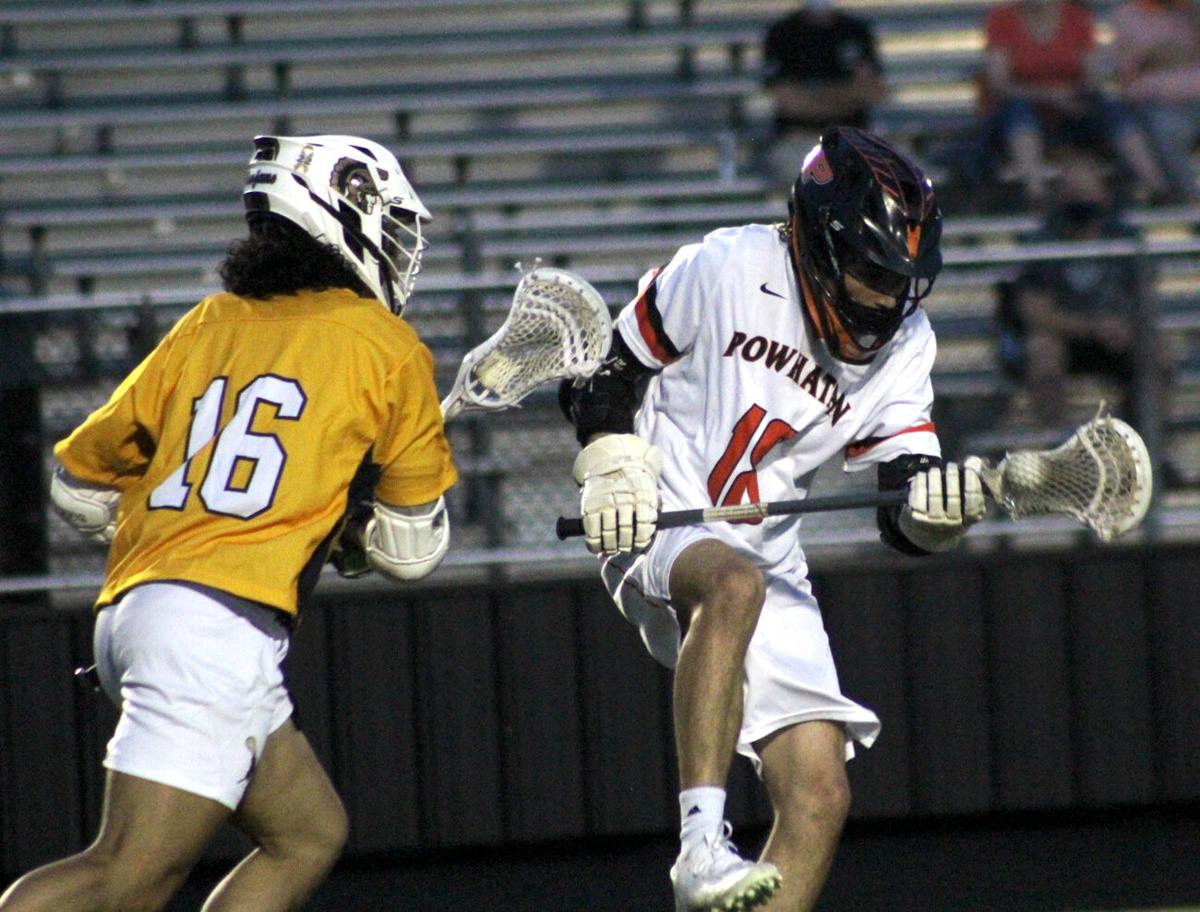 Powhatan High School senior Nate Gray breaks away from Midlothian's defenders in a varsity boys lacrosse game at home versus Midlothian on April 28, 2021.

POWHATAN -- After Powhatan’s varsity boys lacrosse team waited nearly two years to play its first contest of any kind – scrimmage or regular-season game – it’s an amazing feeling to be back on the field, said head coach Joe Niles.

“I think all the guys have been wanting to do this for a long time, and it’s so super-nice to be out here, just be together again as a community, it’s really, really nice,” Niles said. “It feels so good to be back out here. Missed it.”

“I thought we did really well, especially considering we hadn’t played for two years and we hadn’t had a scrimmage, and so that game was a bit of kind of feeling things out,” Niles said. “The guys played well together, they worked and they hustled…they did everything we normally ask them to do.”

In addition to Somerville and Palmore at the attack position and face-off specialists Mahaney and Davis, Powhatan brings back junior goalie Connor Jeffs and senior midfielder Andrew Bastiaensen.

“A lot of these guys...have been playing since they were freshmen with me, so that means a lot,” Niles said, “and they can show all the younger guys really what it means to play Powhatan lacrosse.”

A lot of the team’s sophomores – including Sloan and midfielders Unmussig, Jack Connelly and Connor Walters – have been doing really well according to Niles, and freshman Tommy Menting is playing for the varsity team as a long stick midfielder, which Niles said is a hard position to play.

Sloan and Unmussig scored both of Powhatan’s goals against Midlothian on Wednesday. Sloan fielded an airtight pass from Palmore and flung in the short-distance shot to cut the Trojans’ early lead to 2-1, and then Unmussig finished off a flowing string of passes from his teammates to land a long-distance goal and tie the game at 2-2 before the end of the first quarter.

While the team allowed two goals in the first stanza, Jeffs was still a wall both in that quarter and for much of the game, saving several more shots including one with the Trojans player in his face trying to make the goal shortly before the first quarter’s end.

Ultimately, however, Midlothian scored 12 straight goals from there to win the game 14-2.

“I have a lot of respect for Midlothian’s program,” Niles said. “They’re super successful. I told the guys when we came out here today and yesterday: this game is really going to be about learning how to play the game, because they play very well.

“And they’re kind of a benchmark for us,” Niles added. “That’s where we want to be eventually. We’re not there yet. But we can be. We’ve got a lot of potential on the team – we’ve just got to tie some things up and that sort of thing, but you learn a lot from Midlothian – how they move the ball, their defense, everything.”

As the Indians continue their first regular season in the Dominion District, they will next face Monacan on the road at 6 p.m.

“I’m happy to be out here, I’m super excited. It’s nice to be out here in front of the fans again,” Niles said. “The guys are working really hard. They’re really dedicated, great group of kids…it’s my privilege to be able to coach those guys and I enjoy it so much, so I’m excited about what this season holds for us.”

Powhatan Board of Supervisors holds public hearing on budget

This story has been updated to include information about a petition that was started in response to one board member's comments during the meeting.

Powhatan High School senior Nate Gray breaks away from Midlothian's defenders in a varsity boys lacrosse game at home versus Midlothian on April 28, 2021.