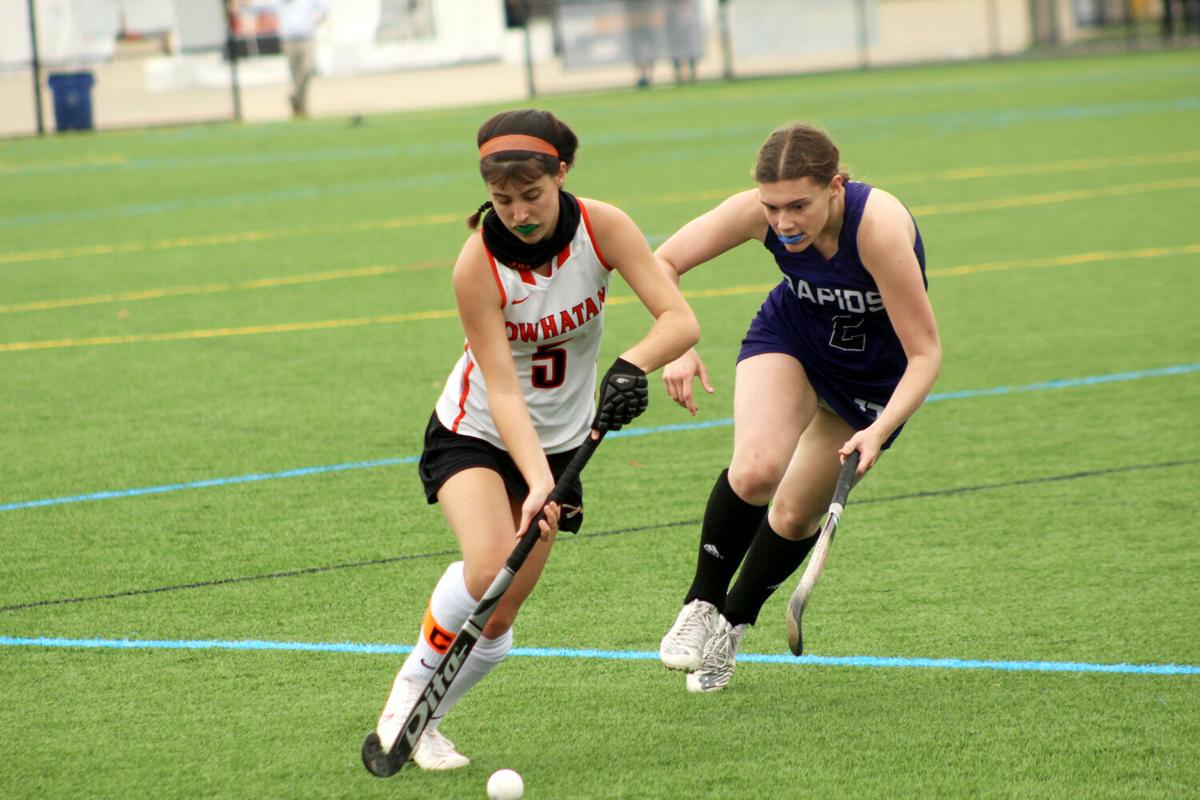 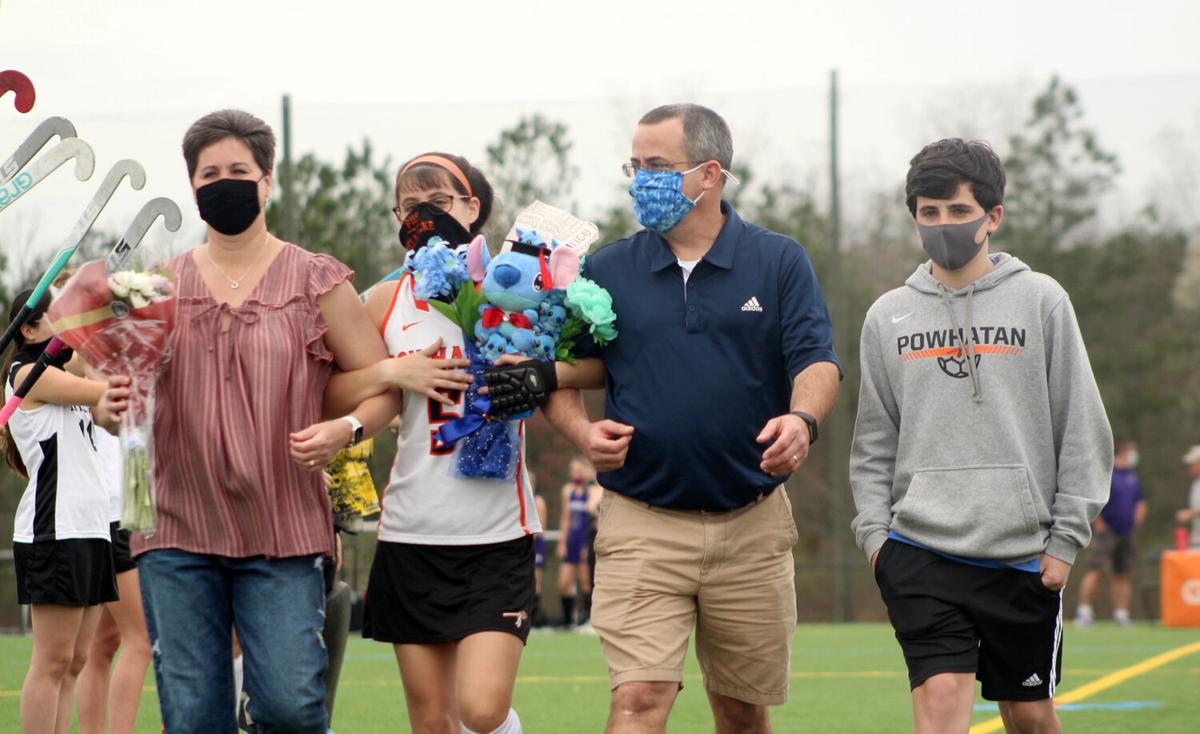 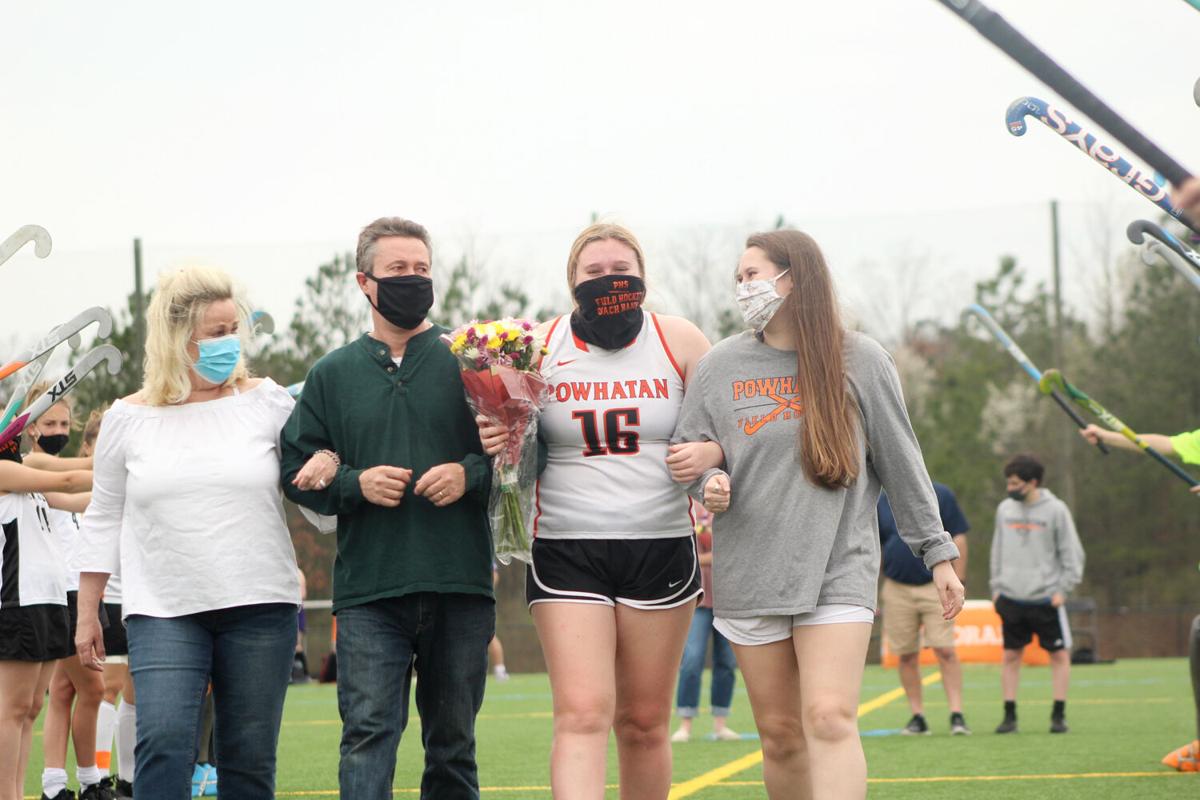 MIDLOTHIAN -- Over the last few games, four-year varsity player and senior Kaitlin Thompson – to Powhatan field hockey coach Caryn Rehme – has been a lot more confident. She’s also been creative, as she’s tried new things like aerials on the field.

The lone senior on the varsity team, Thompson has been a key player this season for the Indians. She was key once more on Thursday, as she contributed her leadership – as well as a second-quarter insurance goal – to the unit's 4-1 win over James River.

It was the first time that the varsity field hockey program had beaten the Rapids.

“It was nice to see the girls fight for this win, because they fought for this one,” Rehme said. “They knew they had to beat James River, and now, the next one, we have to beat Monacan.”

“We definitely did pretty good – started off slow, but we definitely picked it up after they came at us hard,” Thompson said. “We picked it up…worked on the right side like Rehme always tells us to do, and just worked as a team – that’s what we do best, keep our heads up.”

Powhatan scored one goal in each of the four quarters. Junior Hope Burton finished off a corner to give the Indians a 1-0 advantage, and Thompson in the second quarter delivered a long insurance strike into the box.

“Definitely the shot took some time, because the ball’s wet, it’s raining,” Thompson said. “Rehme just tells me to take my time and go with it, and that’s what I did, and it went in.”

Thompson’s goal kept Powhatan in the lead. Later in the quarter, Olivia Staas scored for James River to cut Powhatan’s advantage to 2-1.

But the Indians kept command in the second half. Steady rain fell across the field in the third quarter, but after it mostly let up and the sun briefly emerged in the stanza, Lexie Campbell pushed the ball through after the goalie deflected another shot from Thompson.

In the fourth, Powhatan junior captain Jordan Krauss turned and slammed a groundball into the box to give her team a 4-1 lead late in the game.

Thompson praised James River’s goalie, who also had a big block on an early fourth-quarter penalty stroke that was taken by Thompson.

On her team, Thompson praised teammates Campbell, Krauss and Kate Adams for keeping their sticks down. Freshman Casey Grell – with her transitions across midfield – and junior defender Catherine Griffith – whom Rehme said is getting more confident every game – were both key in getting the ball out of Powhatan’s territory multiple times.

“I definitely see our team growing and growing,” Thompson said. “Catherine’s definitely strong. No matter if she has injury or not, she’s definitely super strong in the back and knows how to get it out, and Casey up the middle just has bursts of speed out of nowhere, and it helps us get it right up the right side to the goal.”

Also helping Powhatan’s defense was Hannah Johnson, who started on JV this spring and has since gotten pulled up to varsity.

Junior keeper Peyton Tuttle had five saves for the Indians, including three in the fourth quarter.

Powhatan celebrated both of its seniors in the program: Hanna Hathaway and Kaitlin Thompson.

Hathaway, who played on the varsity team up to her junior year, opted to help Powhatan field hockey this year as a manager, and Rehme said she’s been really helpful to Coach Varna Redlich and the JV team. Rehme noted that Hathaway has shown and demonstrated drills to the JV players, and that she’s been positive with them and supported them at the games.

Rehme added that, as a player, “Hanna has always had one of the best sticks” and noted that Hope Burton reminds her a lot of Hathaway with the stick – “the stick seems to just pick up the ball.”

“It’s just nice to have her end her senior year out here,” Rehme said of Hathaway. “We were happy to honor her.”

Thompson at the end of January committed to attend and play field hockey for Roanoke when the program offered her a spot on the team’s roster. Thompson, who has also played field hockey for Panthers United, noted that personnel from Roanoke came out and saw her at a tournament.

“I went and visited them, and it sparked my eye, and now I’m going there,” Thompson said, praising Roanoke’s small campus. “The girls were really nice when I went there. The coach was super nice. I’m really looking forward to it.”

Thompson looks forward to remaining a leader, and to not being shy.

“It’s going to be a little nervous at first, just because: freshman year,” Thompson said, “but other than that, I think I’m just going to keep doing me and keep staying positive.”

Rehme said that the team’s two captains, Thompson and Krauss, complement each other very well.

“I think that, the positivity on the team, I think we’ve meshed as a team in that regard,” Rehme said, “and I feel like, as the season’s going…this year we just keep moving forward and getting better, and I think it’s that positivity that’s helping.”

Powhatan (4-4) will play its final games of the regular season. The Indians, seeded fifth in the region, will play Region 4B opponent Monacan on Tuesday, March 30, and L.C. Bird on Thursday, April 1. Both games will be held at River City Sportsplex.

“Even though I transferred here I believe first grade or kindergarten year…it definitely has become my home,” she said. “(Coaches Stephanie) Tyson and Rehme have raised me all the way up from eighth grade. Definitely my second family right here.

“I’m ready to go, but I’m sad to leave,” Thompson said, “because this is my home – this is my family right here.”

HENRICO -- Despite Monday’s season-ending 2-1 loss to Mechanicsville in the Class 4, Region B semifinals, the young Powhatan field hockey team…