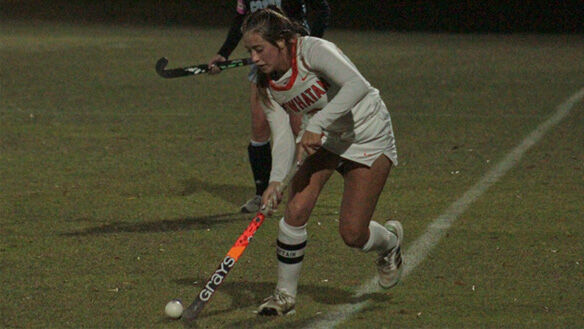 Senior Kate Adams takes the ball past midfield against Clover Hill on Oct. 19. 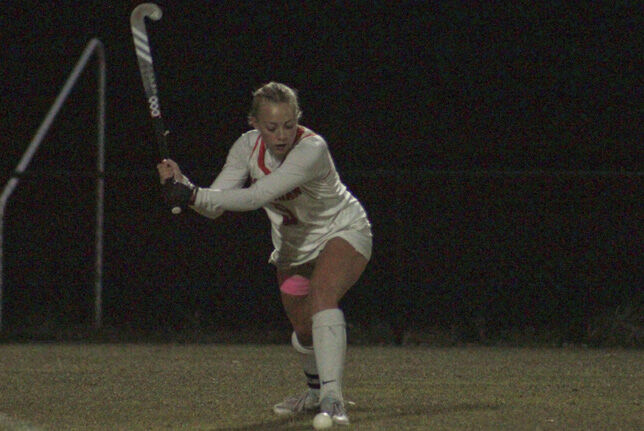 Senior Emilee Taylor swings on the ball to send it out to her attacking teammates. 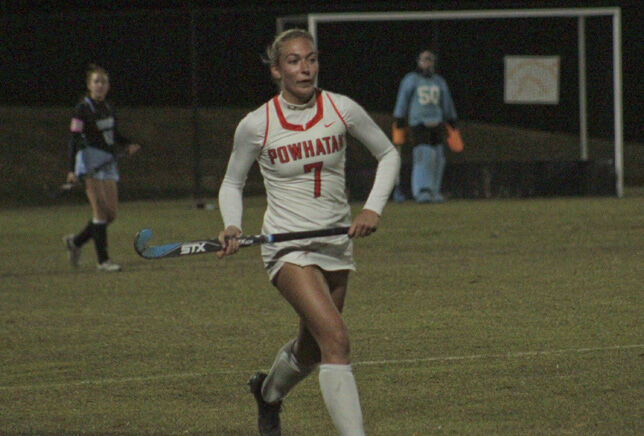 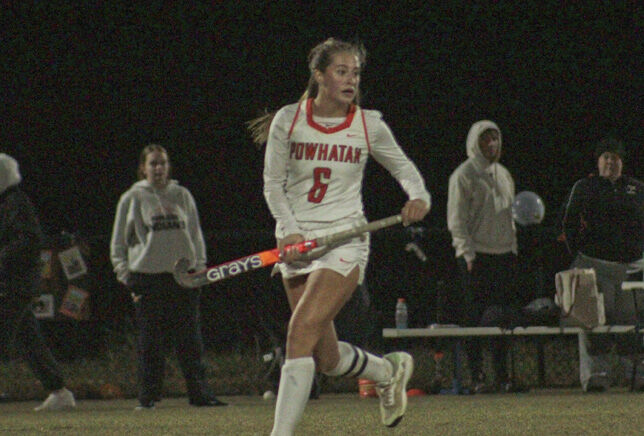 It wasn’t the result they were looking for, or even expecting against a rival Cosby Titans team, but the Powhatan Indians field hockey team battled hard on their senior night and fell just short of taking down the Titans in a 1-0 loss on Wednesday, Oct. 19.

It was an eerily similar result to the first matchup between the two teams, with the Titans also taking that game in a 1-0 defensive battle on Sept. 20 that saw limited on-goal chances and plenty of strong play in the cage from both goalies.

Even with the loss, which puts the Indians at 10-4 on the season, the team was in high spirits after a special night that honored seniors Kate Adams, Lexi Campbell, Emilee Taylor and Izzy Carsen.

“The whole team is my family and it’s so fun to watch this team grow from the past four years,” Adams said. “Even though this wasn’t the outcome we wanted, I feel like this was the best step we could’ve taken because I felt like we stepped up the whole game, and it just shows our strength together as a family.”

After the game, Campbell, a five-year player with the program and the leading scorer the last two seasons heading into her senior year, said she was happy to have this moment with her family and teammates and has cherished the feeling of helping the younger athletes that will soon take over as leaders themselves.

“I feel like since I’ve been on the team for five years and I’ve looked up to so many people, it’s so nice being the person other girls look up to.”

Taylor also shared the tight-knit family sentiment of her fellow senior class, saying how the team always gets through adversity together, including a loss to a rival like Cosby.

“I think it’s just so genuine, the relationship we all have with each other, and the way it’s grown over the years and how we’ve grown as a family makes our bond inseparable,” she said. We always end up pulling together in the end.”

Early in the first quarter, the Indians had a handful of quality chances after an energetic start, including chances from Campbell and sophomore Chloe Holt in the first three minutes and a Casey Grell set up to Erica Krauss off a corner, but the Titans did well to push those chances to the side and keep the game tied up entering the second quarter.

Powhatan’s best chance of the half came with a little under four minutes to play in the half, as sophomore Caroline Camp laid out a great pass to junior Carter Quinn.

Beyond that, chances were few and far between for both teams, and the game continued to be a scoreless affair entering the second half.

Cosby finally got ahead with over 10 minutes to play in the third quarter when a cross from the right side made its way to the front of the cage and was tipped in to give the Titans a slim 1-0 advantage.

Two minutes later, junior Emily Reimondo had a nice chance on a turnaround shot inside the box that went on goal, but it was again denied.

The fourth quarter again saw few chances for the Indians, while the Titans played defensive-minded in order to hold onto the lead and ultimately the win.

“Every time we play Cosby it ends up being a very close game,” head coach Stephanie Tyson said. “Unfortunately this year they won both but I do feel like we did a good job adjusting going into this rematch. We executed the plan we worked on at practice leading up to the game, and it seemed to be working, but we were unable to capitalize on our scoring opportunities.”

Carsen, a defensive leader who was unable to play this season due to a knee injury, says playing a team as disciplined as Cosby makes Powhatan a better, more prepared team when they enter the postseason.

“I think they have really good skill,” she said. “They triple man, are always on the ball, always on-girl, and I think that helps them a lot. A lot of other teams don’t stack like they do.”

Coming off a program-defining season, Powhatan basketball looks to familiar faces to lead the way

Entering their season finale matchup with the Cosby Titans having lost their last two games, the Powhatan Indians tried to get back on the rig…

After a stellar regular season, the Powhatan volleyball team saw its year come to an end earlier than expected in the Region 4B tournament.

Senior Kate Adams takes the ball past midfield against Clover Hill on Oct. 19.

Senior Emilee Taylor swings on the ball to send it out to her attacking teammates.