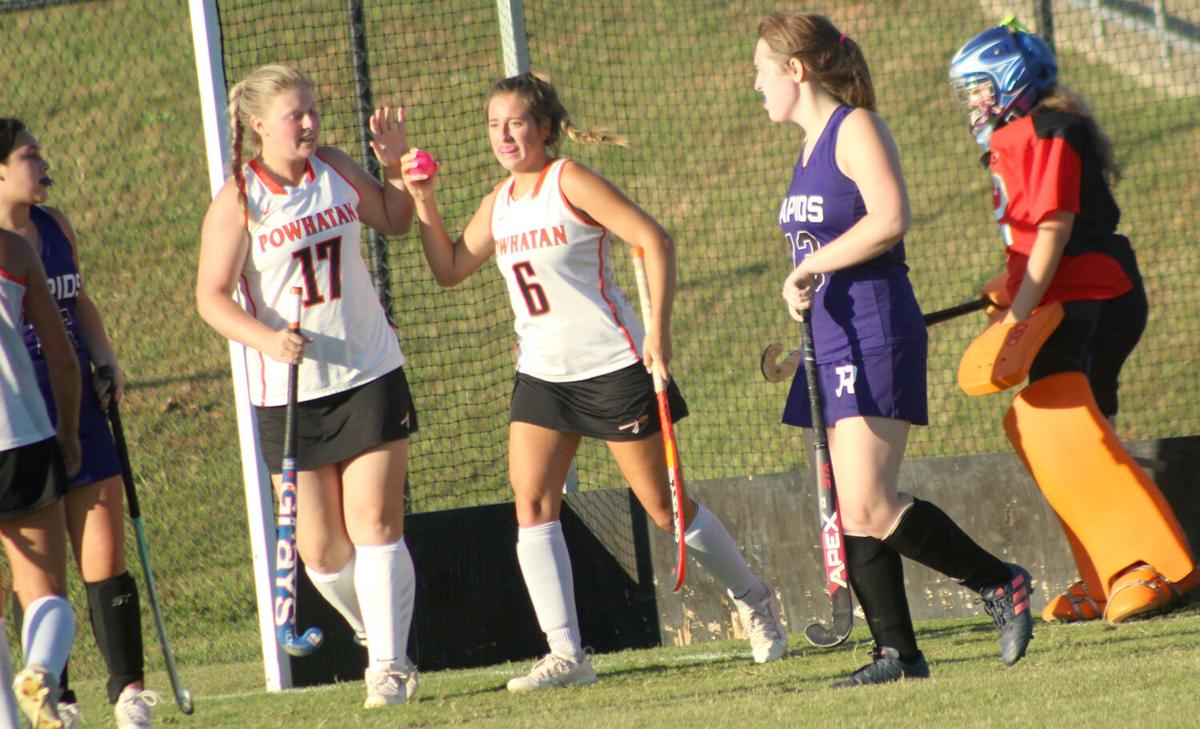 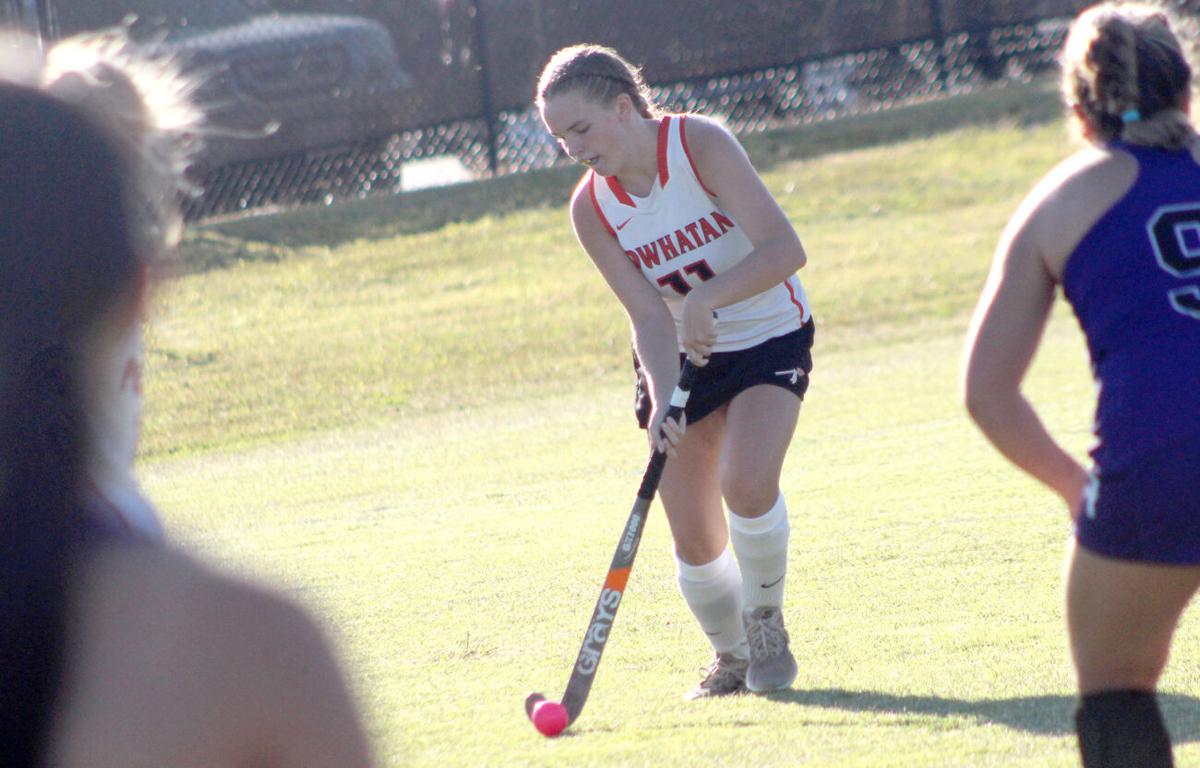 Powhatan's Izzy Carson sets up in her attempt to clear the ball out of the Indians' defensive territory in Powhatan's home varsity field hockey match versus James River on Sept. 27, 2021. 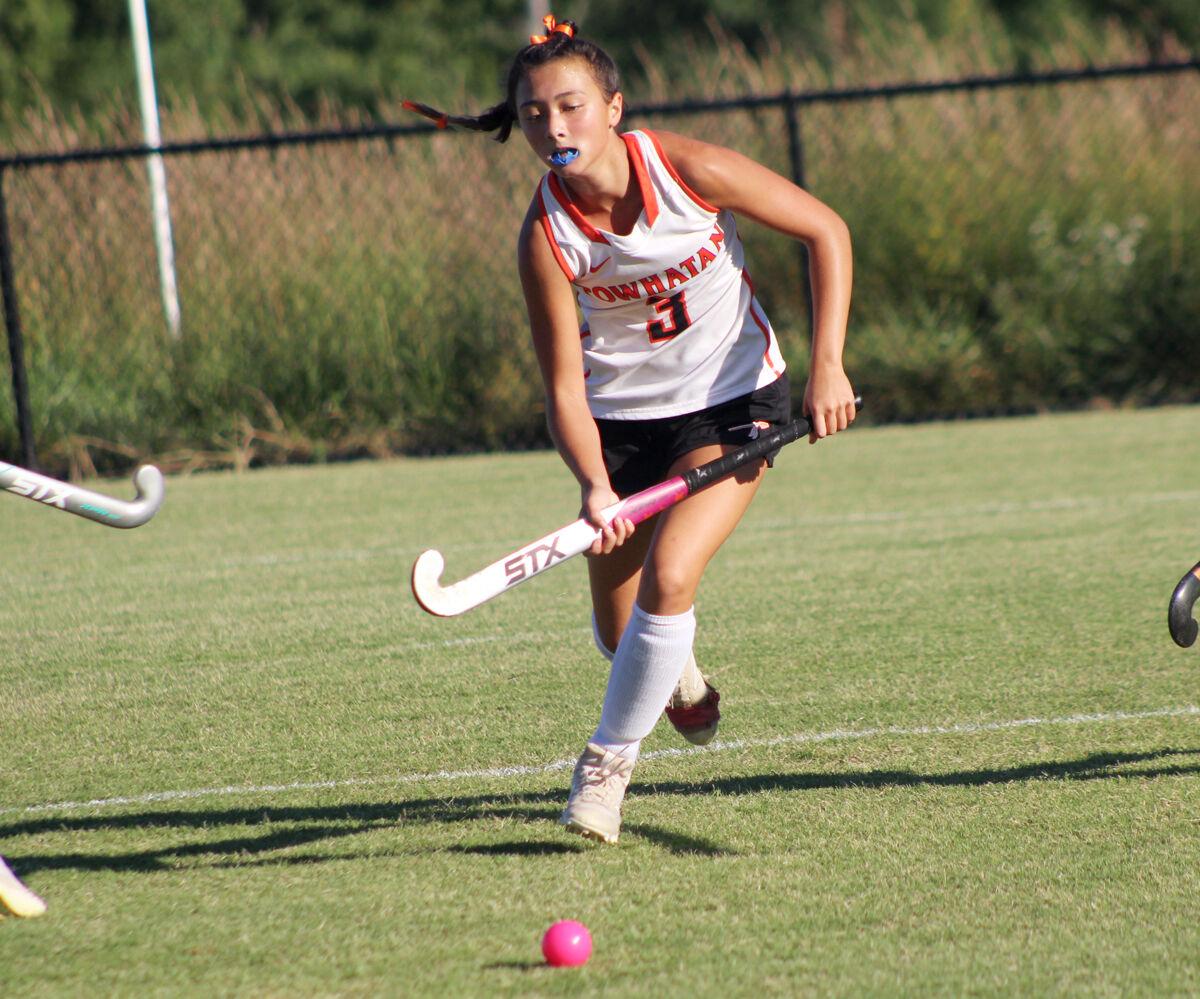 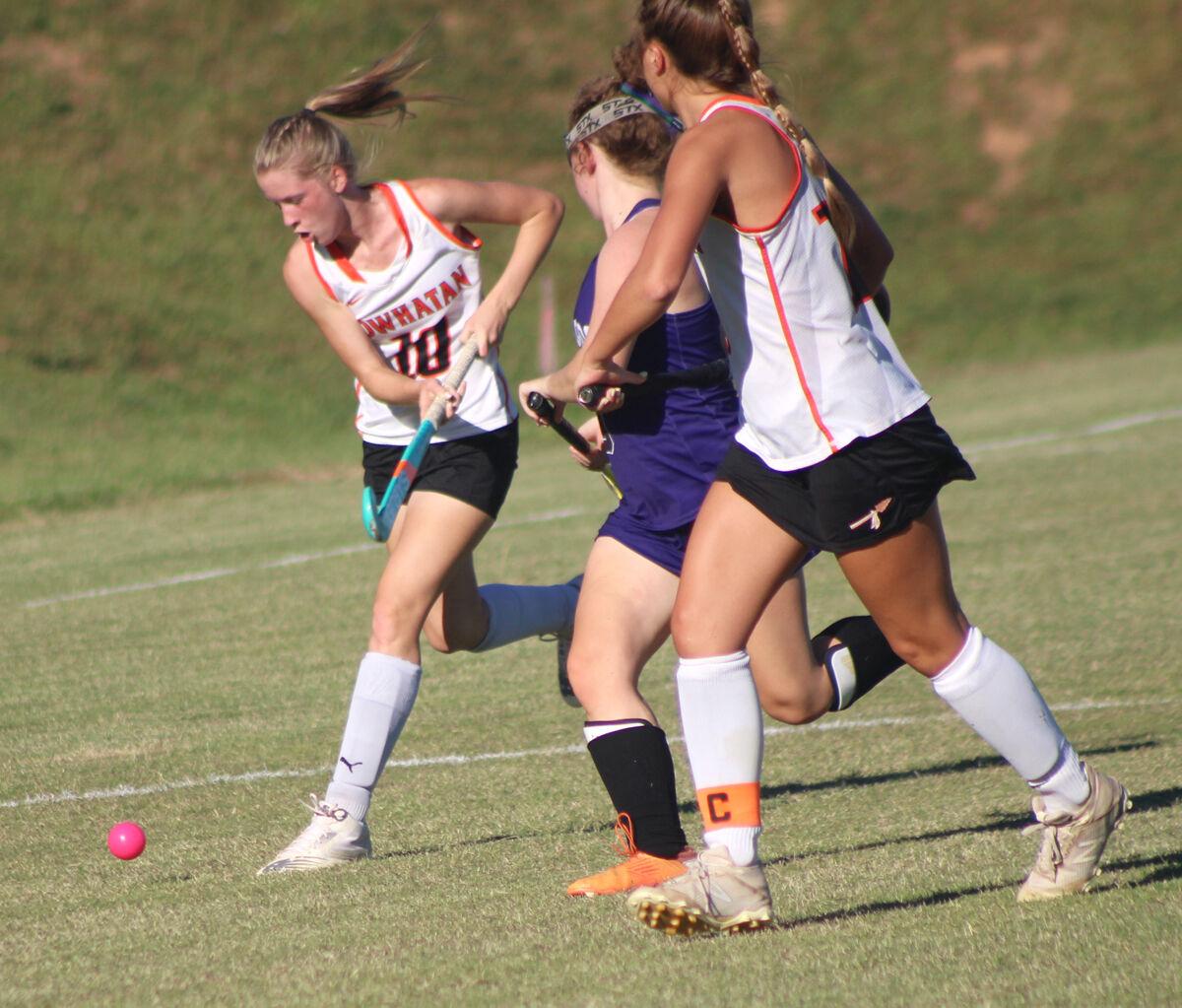 POWHATAN – After battling tough teams in four tight, low-scoring contests this year, Powhatan tapped into an early rhythm on offense and racked up the goals in a 5-3 victory over the formidable James River on Monday.

“One of the things I think I’m most proud of with this (win) is the amount of goals we scored against a team like this,” said Powhatan coach Caryn Rehme.

Powhatan seized a 3-0 lead before halftime. Sisters Erica Krauss and Jordan Krauss combined to score the first three goals. After she scored the team’s third goal and her second of the game on a short lateral strike into the cage from the right side, Jordan, a senior captain, hugged her freshman sister Erica, who had the assist on Jordan’s goal. The two sisters’ bond has been emblematic of the strong overall chemistry that has united the players on this year’s team.

“You can’t ask for nicer girls – they’re so team-oriented and such team players that they never have the attention on them. They never seek the attention,” Rehme said of Jordan and Erica. “They’re just great players, and they have a great relationship. They’re very close – you can see that on the field – but they incorporate other people in, and that’s the nice thing. They share well.”

Freshman Chloe Holt has been having a lot of big games lately for Powhatan. Rehme said she’s starting to figure out her right midfield position when it comes to how she can support her forwards and also get back on defense, and Holt excelled on both ends of the field on Monday. Freshman Chloe James also had a great game in a new position at left back according to her coach and her teammates, who gave her one of the team shout-outs after the game.

With its sights set on finding the net more often, Powhatan changed its game plan a little bit with the forwards ahead of Monday’s game. The lineup and approach looked different. One of the team’s key leaders on defense in past games, Catherine Griffith, moved up the field into a position in which she had responsibilities on offense.

“We need to have the ball in her hands,” Rehme said. “She’s an excellent player, and you’ve got to put the ball in the hands of those players that can get it done, and she can.”

Rehme noted how their defensive struggles in Monday’s game stemmed from the team getting used to the new lineup.

“But it’ll come, just adjusting things,” Rehme said, “but super proud of the girls with just putting the ball into the cage, and quickly.”

Powhatan will rematch Monacan – a rival to the Indians both in the Dominion District and in Class 4, Region B – on Wednesday at 7 p.m. at Powhatan High School. In their season opener at Monacan, the Indians triumphed 2-1 over the Chiefs in shootouts.

Midway through the regular season, Powhatan’s record sits at 7-1.

Powhatan's Izzy Carson sets up in her attempt to clear the ball out of the Indians' defensive territory in Powhatan's home varsity field hockey match versus James River on Sept. 27, 2021.