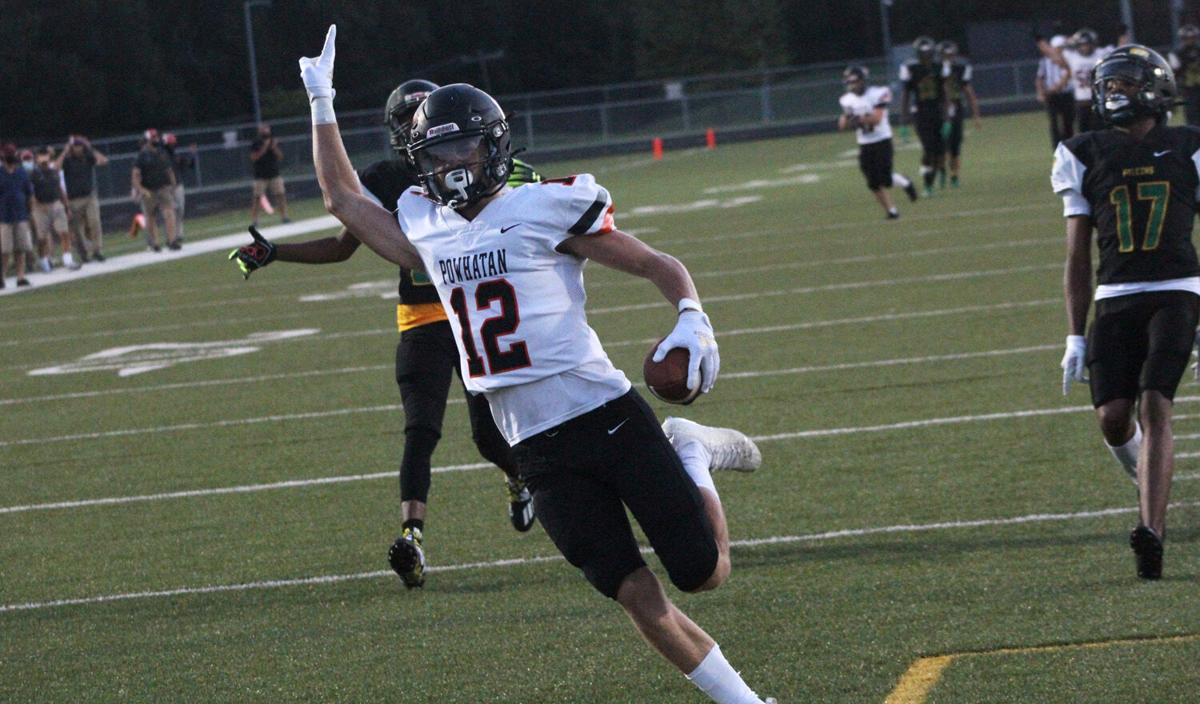 Powhatan's Ethan Dowdy reacts after scoring a 43-yard touchdown reception in the Indians' game at Huguenot High School on Sept. 10, 2021. 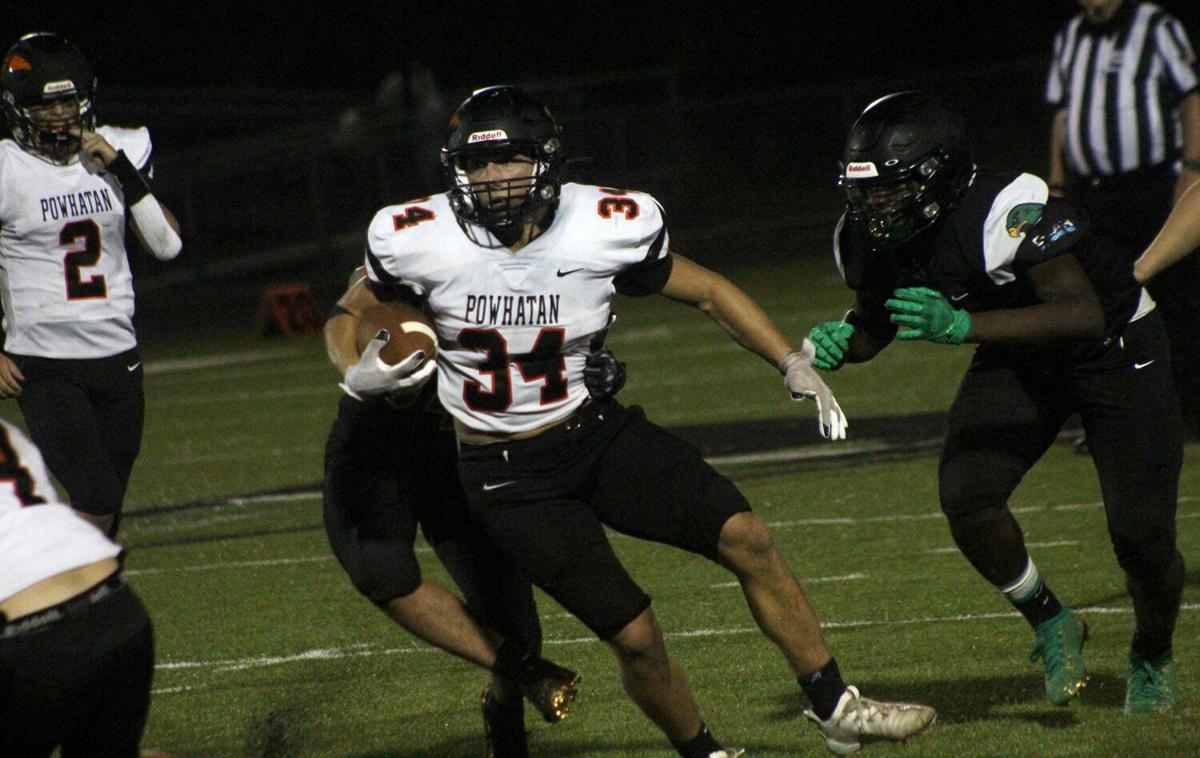 Powhatan's Mitchell Johnson runs the football in the Indians' game at Huguenot High School on Sept. 10, 2021. 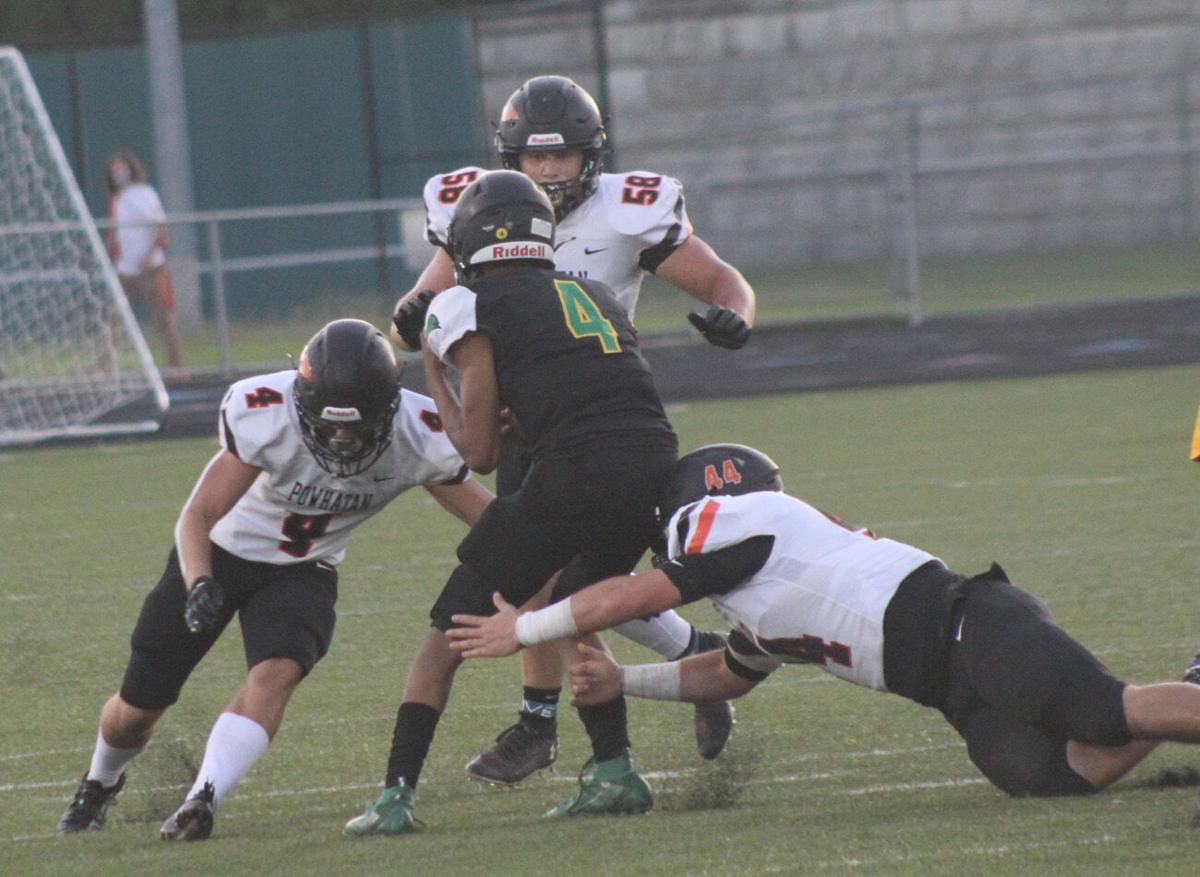 RICHMOND – They had been there before.

Mitchell Johnson and some of his current teammates were on that very field at Huguenot High School nearly 2 years ago when they and their Powhatan Indians battled the hosting Falcons in the 2019 regular-season finale for a chance to compete in the playoffs.

Johnson, who was then a sophomore, showed how much he had emerged as the Indians’ running back as he rushed for 106 yards and two touchdowns. But the Falcons edged past Powhatan 20-14, ending the Indians’ season.

This time around, however, Johnson had something else to go along with a 100-plus-yard rushing, multiple-TD-scoring night at HHS.

A collective team effort across the board – 337 yards of offense, stonewalling defense and key special teams plays – propelled Powhatan past hosting Huguenot 28-6.

“I can’t speak for everyone else, but…for me, personally, this means a lot being able to come out here and show everybody that we’re the better team, and that we’re ready to play,” said Johnson, who this time carried the ball 25 times for 119 yards and three touchdowns.

After Huguenot literally snatched the first lead on an interception that Ja’heim Staten carried 67 yards to the house, Powhatan eventually struck back when senior receiver Ethan Dowdy sprinted into open field behind the Falcons’ defenders, and junior quarterback Dylan Trevillian rifled the ball into Dowdy’s hands for the 43-yard scoring strike.

Trevillian completed 13 of 22 passes for 202 yards and a touchdown. The chemistry continued to shine between Trevillian and Dowdy, who caught 9 of those 13 passes for 123 yards and the early-game touchdown.

“They worked a lot this summer and they really improved. Dylan throws a great football. Ethan has been a great receiver,” said Powhatan head coach Mike Henderson, “and those two guys really just have a chemistry – and sometimes it’s hard to put your hands on what makes that chemistry be so good – but it’s certainly something you can look onto the field and see, and it is.”

Senior Hans Rehme, who was one of Powhatan’s starting quarterbacks the last two years and is also on the school’s golf team this year, was a two-point conversion wizard on Friday. He propelled his team into an 8-6 lead on the two-point run and then later padded the Indians’ advantage to 22-6 when he threw the ball to kicker Tucker Thomas, who made the catch to complete the two-point pass play.

Powhatan’s defense, anchored by four-year starters Chase Gayness and Wyatt Lowe and their fellow linebackers Andrew Cheatham and Oscar Whitely, made it a steep hill-climb for Huguenot’s backs every time they attempted to run the ball.

“That’s kind of the way we expect those guys to play,” Henderson said of Powhatan’s linebackers, who along with their teammates totaled 10 tackles for loss in Friday’s game. “They are really good. We expect them to be really good, so when they play great – I’m so happy they’re on our team – but we expect them to play that way. (Inside linebackers Wyatt and Chase are) four-year starters…and Andrew Cheatham’s a terrific outside linebacker, and Oscar’s doing a great job on the other side, too, but we expect those guys to play that way, and I don’t take them for granted, but for us to be good, they have to be great.”

Asher Timberlake and Zack Karanian each had five tackles and a sack, and Karanian forced fourth and long on a huge tackle for loss early in the third quarter. Ashton Tingle recovered a loose ball on a botched punt return by the Falcons early in the game, and Mehki Langhorn forced fourth down in the opening half when he broke up a pass on a deep shot downfield by the Falcons.

In addition to his big touchdown catch, Dowdy in the first half stopped a Huguenot ball carrier on fourth down in Powhatan’s territory to hand the ball back to the Indians, and he later tripped up a Huguenot receiver to disrupt what would have been a big-play pass in the fourth quarter.

After Huguenot began its first drive of offense with the short field off of an onside kick after Staten’s touchdown, Gayness, Lowe and Jason Worthington ended Huguenot’s drive when they combined on a tackle to force a change of possession.

Cheatham set up two short-field touchdown drives for Powhatan in the second quarter when he nabbed an interception from around midfield and sprinted to the Falcons’ 19, and then fielded a short punt that he returned to Huguenot’s 35.

Cheatham also stopped Huguenot’s quarterback on fourth down to give the ball back to his Indians on their own 15 with 8:17 left in the game.

Johnson capped both second-quarter drives with touchdown runs of 9 and 5 yards, respectively. On the first, he burst up the middle and caught air on a hurdle-clearing jump en route to reaching the end zone.

“The entire game, I realized that they’d been going for my ankles and my knees, and I realized that if they were just going to keep doing that every single play – one, it’s going to be taking a beating on my legs – and I was assuming that a second-level guy, as a safety or a corner, they’re going to be going low,” Johnson said. “I saw him loading up, and I just went up.”

And Johnson did ask the referee about it beforehand, because Johnson noted that he’d been penalized in a previous game. “I told him if they were going to keep doing (that), I was going to go up,” Johnson said.

Worthington helped keep that drive alive when he recovered a fumble by his teammate and even gained a couple more yards for his team as a result.

During the fourth, Zack Warinner grabbed hold of a shovel pass from Trevillian, broke a tackle, shed the Falcons’ pressure and barreled 60 yards downfield before he was brought down by a Huguenot defender on the Falcons’ 4. On the next play, Johnson carried the ball across the goal line from a short ways out with 6:56 to play to secure his third rushing touchdown of the night.

“It feels amazing, having this type of momentum going forward,” Johnson said Friday. “Now we can finally move forward to Manchester, which we all know is going to be a pretty big opponent coming up, but…tonight, we’re going to enjoy it.”

After overcoming a shaky start to the game, Powhatan excelled across all facets of the game, and Johnson pointed to a unifying element that he’s seeing fuel those successes.

“We’re playing together,” he said. “If a mistake does happen – that’s bound to happen, mistakes – we don’t let that get to us. We don’t beat each other up. We get together, we go look at what happened, we figure it out, we fix it – so just keeping our heads right, being able to go out there and play the way we know we can as a brotherhood.

“That alone fixes into everything else – pass, run, defense, kickoff, kick return – just that camaraderie, being that close with one another, trusting in one another, being able to fix and learn from our mistakes.”

Powhatan's Ethan Dowdy reacts after scoring a 43-yard touchdown reception in the Indians' game at Huguenot High School on Sept. 10, 2021.

Powhatan's Mitchell Johnson runs the football in the Indians' game at Huguenot High School on Sept. 10, 2021.