Powhatan's Grace Hayden (foreground) contests a Cosby player for the ball on a draw in a May 26, 2021 varsity girls lacrosse game at Cosby High School. 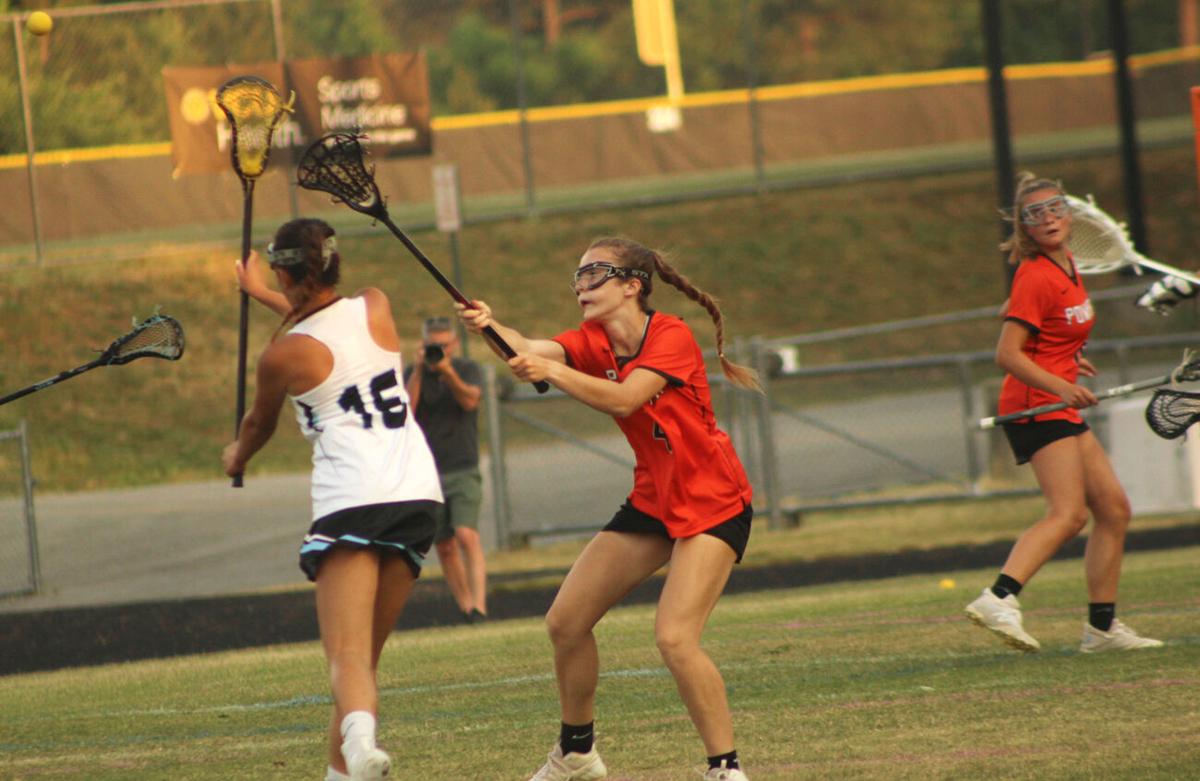 Powhatan's Sam Flippo (4) plays on the defensive end in a May 26, 2021 varsity girls lacrosse game at Cosby High School.

Powhatan's young varsity girls lacrosse team is heading into regionals after assembling its winningest regular season to date percentage-wise with a record of 7-2.

"For as young of a team as we had, I didn't really know what to expect," said Powhatan head coach Laura Camp, "but seeing these girls give their heart and soul to every single game and never give up and finish strong and work so well together and just be more of a powerhouse than I thought we would be really makes me excited for next year and happy for the girls."

The Indians opened the week with a dominant 24-7 victory over Manchester. Kate Adams had 5 goals in the game, Hannah Johnson netted 4, Jordan Krauss and Sophie Payne each had 3 and Krauss added four assists while Lexi Campbell had three.

"We definitely came out a little slower than we had in the past, but the girls rallied," Camp said. "It was kind of a physical game, so that was one challenge that we were facing, but the girls, as in normal fashion, they rallied, came back, they finished super-strong. They played well together as a team."

On Wednesday, Powhatan faced an unbeaten Cosby team in its regular season finale and cut the home unit's team to 5-3 and then to 13-8 on 3 straight goals early in the second half. Cosby would pull away to win 18-9, thus capping Powhatan's winning streak at 6 straight, but Camp commended her team's perseverance.

"Cosby was definitely the toughest team we've played this season, and we knew that going into it," Camp said. "I'm really proud about how the girls...didn't give up the whole game. They finished strong. They worked together. Defense was a little quiet in the beginning, but they started communicating, and that's a work in progress, is just communicating and knowing where your teammates are, and that's something that we'll just build upon for next year for sure."

Krauss netted 4 goals in Wednesday's loss and added three assists. Kendal McMullin and Sophie Payne each scored 2 and Lexi Campbell had 1, and all three players had 1 assist each.

Powhatan will begin play in regionals on Monday, June 14. Camp said they're going to be facing competition similar to Cosby.

"This was a really good wakeup call for us to see what level of competition we're going to be facing in regionals," Camp said. "It was really good practice and kind of a reality check as far as where our game needs to be if we want to compete against teams like Cosby."

Powhatan's Grace Hayden (foreground) contests a Cosby player for the ball on a draw in a May 26, 2021 varsity girls lacrosse game at Cosby High School.

Powhatan's Sam Flippo (4) plays on the defensive end in a May 26, 2021 varsity girls lacrosse game at Cosby High School.