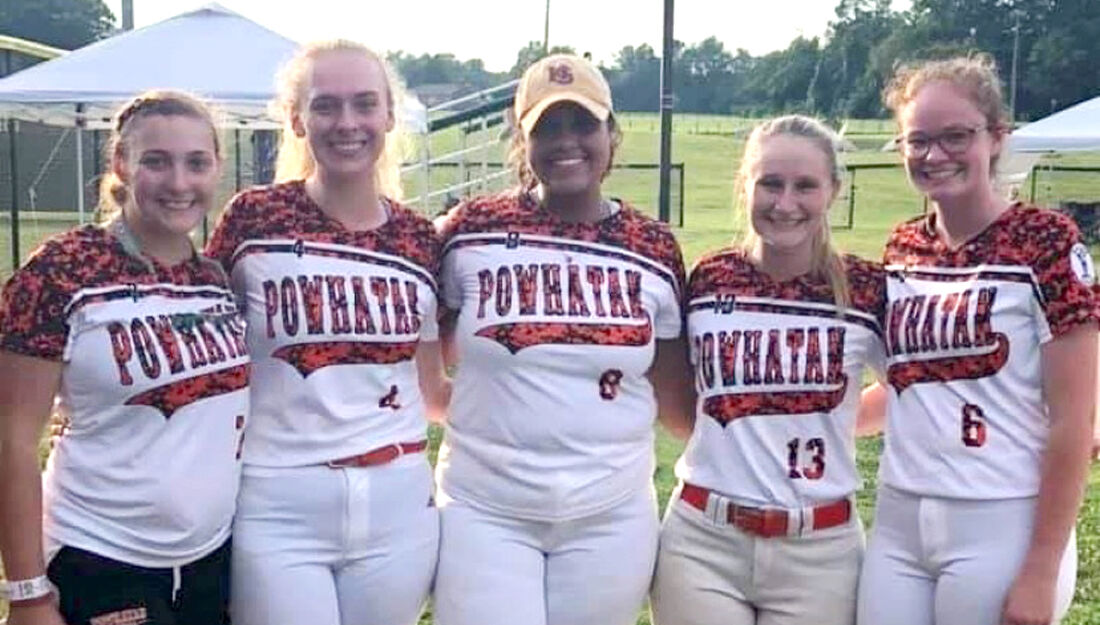 Kota Lewis (left) stands with her PYAA Debs softball teammates. In June, Kota found out that she had Hodgkin’s lymphoma. But Kota caught it in its early stages, and she is currently on the road to recovery. She had her third and final chemotherapy treatment in September. 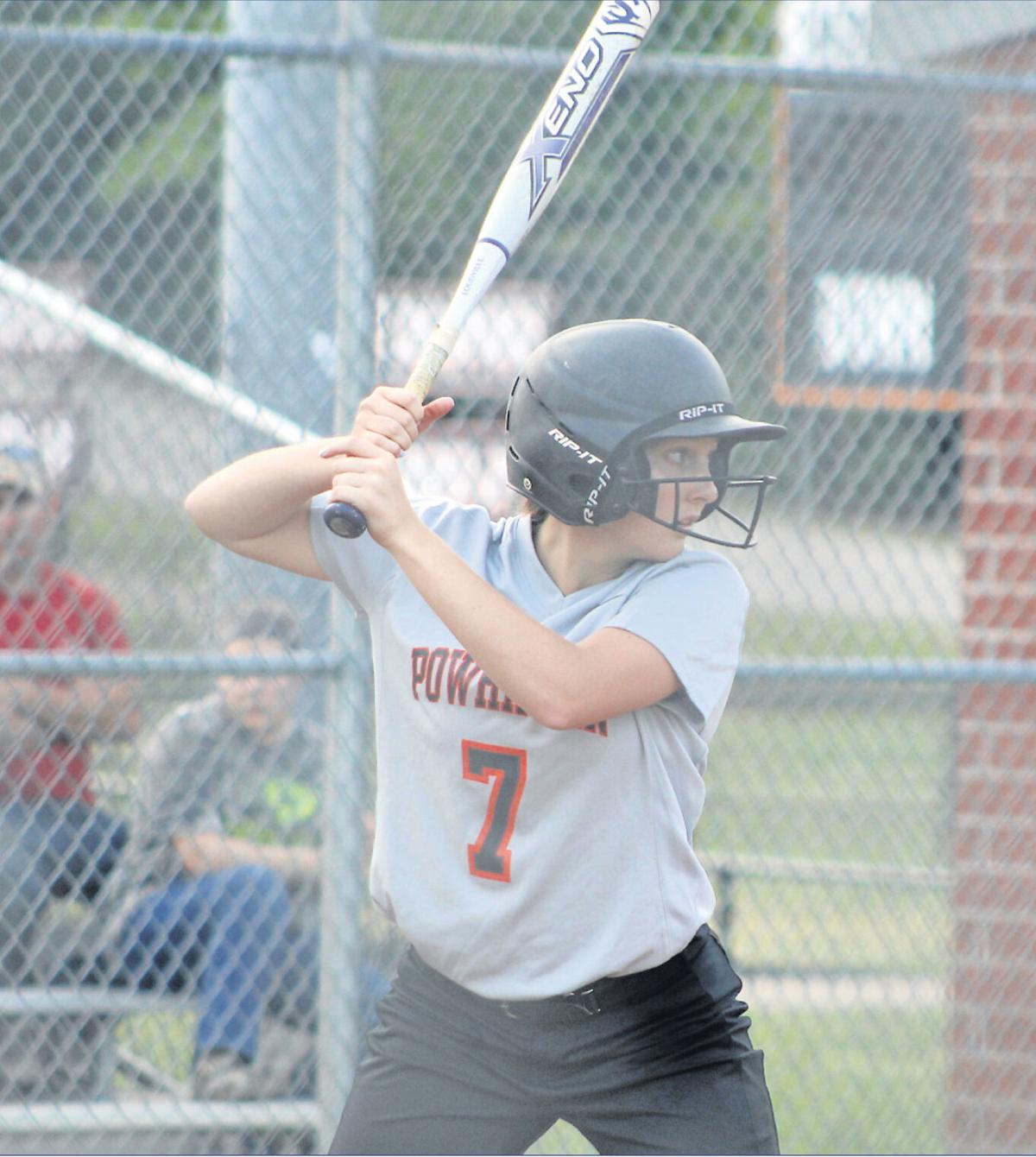 In June, Powhatan’s Kota Lewis found out that she had Hodgkin’s lymphoma. But Kota caught it in its early stages, and she is currently on the road to recovery. She had her third chemotherapy treatment in September.

In June, Kota Lewis found out she had cancer. She's now on the road to recovery. Medical personnel who have taken care of her, and the Powhatan community, have been a part of her recovery process.

Kota Lewis was pitching during a practice with her 2021 Debs All-Star team in June – just a week before the state tournament – when she noticed a lump in her neck. She could feel it when she threw the ball. The size of the lump was noticeable – you could look at her neck and see that it was there. There was pain if you pressed on it.

Kota went to the doctor the following week on Monday. The next day, she was in the E.R. After the C.T. results were in, Kota’s physician called her stepmom, and her parents came and got her while she was at work.

Emergency technicians rushed her into MCV to get more scans completed, and she spent the night in the hospital with hopes of getting her biopsy done the next morning.

But already – because of the nature of her symptoms – medical personnel suspected she had cancer.

Kota’s doctor called her and told her that it was Hodgkin’s lymphoma – which was lucky in that it wasn’t leukemia, she said – and he wanted Kota and her support system to come in and talk about the stages and the treatment protocol.

Hodgkin’s lymphoma is a cancer that originates from the white blood cells called lymphocytes. Symptoms can include fever, night sweats and weight loss. For Kota, her body started itching really badly – she thought it was just allergies – and it had started back in April. She also had night sweats.

Fortunately, Kota discovered that she had Hodgkin’s lymphoma when it was in an extremely early stage. No news when it comes to finding out you have cancer is good news, but it made her feel a lot better to hear from medical personnel that they had caught the cancer early, and that her treatment wasn’t going to be horribly long.

After she heard the news, they scheduled a PET scan to make sure the cancer wasn’t in more of her body or bone marrow. Two weeks after she found out she had cancer, she had her port surgery – which involved placing a flexible tube in her chest for receiving medication – and they told her that she would have nine weeks of chemotherapy.

With her treatment, each of her cycles lasts 21 days. She goes in on Thursday to get all five medicines that she’s on, and on Friday she gets four of them. On Monday, she has to go back and get an immune booster to boost her white blood cell count. After that Monday, she goes in and gets the last dose of the medicine that she didn’t get that Friday, and then, the following week, she goes in and gets her counts checked again.

The recovery process hasn’t been easy. She had to miss her 2021 summer softball season with the PYAA Debs team, and that was a year after she had lost her senior varsity softball season due to the onset of the COVID-19 pandemic.

And because the chemo typically drops your white blood cell count – which helps your immune system fight off infections – she has to stay home and not go anywhere. She doesn’t get to see her family or friends.

For Kota, it’s taken more of a mental toll on her than a physical one.

But she’s taking steps to be as connected as she possibly can to those around her.

She doesn’t know what she’d do without FaceTime right now, and – at least for a little bit – she was able to go to the Turner Field Complex on Saturday, Sept. 11 where the Powhatan Youth Athletic Association held not only its opening ceremonies for the fall softball season, but also a fund raiser for Kota.

All of the proceeds from the event were marked to help offset her medical expenses. The PYAA also set up a GOFUNDME page for her (https://gofund.me/b325451d).

“Just to be there and have the support of the community was more than anybody there will ever really know,” she said. “The community has really just kind of gathered me up and made me feel a lot better…just being there and seeing all of the people there who support me is very heartwarming to me.”

Kota hadn’t been with PYAA for a long time – this was her first year playing with them – but to her, what they’ve done to support her is remarkable.

“I’ll never be able to thank them enough for what they’ve done for me and how they’ve helped me out.”

She’s seeing improvements from her treatment. The lump in her neck is pretty much gone. She doesn’t have any of the symptoms that she had when she was first diagnosed – all of that is gone.

Earlier this month, she had her third and final chemotherapy treatment.

Next, she has scans to see if the chemotherapy has worked. If it hasn’t, then they do more chemo. If it has worked, then she still has to be a little cautious about being around a large group of people. And because she works at Chippenham Hospital as a patient care technician, there are more precautions about where she can go and do in the hospital due to COVID. Her first scan when she goes back to see if the cancer is gone is on Oct. 8. After that, she has scans every three months for 16 months.

After she’s able to get her port removed, she plans to practice with Coach Chris Bryant and PYAA’s softball players as soon as she can, just to get back out there. Softball was her life. It’s what she’s been doing since she was little. From her seventh grade year and on, travel ball has been spring, summer, fall. And Coach Bryant has been very supportive with everything.

Last year in June, Kota had told the Powhatan Today that she was planning to attend John Tyler Community College and study nursing. Everything that’s happened these past three months has made her study harder. Since she had to take off this fall semester after finding out she had cancer and subsequently undergoing the treatment process, she’s been studying for her TEAS test to get into the nursing program.

She only has one more class to take before she can enroll into the program.

“My sister wanted to be a nurse, so then I started looking at it with her,” Kota said last year. “Going to the hospitals and seeing how much a nurse can impact somebody’s hospital stay – that just made me want to do it, being there for somebody – because a nurse can help or break a person’s hospital stay.”

She really loves the people who have been treating her during this whirlwind period. Everyone at VCU Children’s Hospital has been phenomenal to her. She feels they just make the situation feel like it’s not as horrible as it is – they’re always there to talk to you, laugh with you, or help you with whatever you need.

“They’re always right on top of it when you need them the most,” she said.

No one ever wants to go through this ordeal, but it really made Kota look at her life differently.

“The time that you spend with people is a lot more cherishable than you think, because you don’t know when you can’t see them anymore – can’t even touch them or hug them,” she said. “You just never know.”

If you ever have to face this, Kota’s advice for you is to keep your head up – and you’ll get through it.

“It’s hard. It’s not the easiest thing to go through,” she said. “But having people around you that support you and love you makes a whole world of difference.”

POWHATAN – Going into Friday’s game, Garrett Musselman and his fellow Blessed Sacrament Huguenot teammates who had been there for four years h…

Kota Lewis (left) stands with her PYAA Debs softball teammates. In June, Kota found out that she had Hodgkin’s lymphoma. But Kota caught it in its early stages, and she is currently on the road to recovery. She had her third and final chemotherapy treatment in September.

In June, Powhatan’s Kota Lewis found out that she had Hodgkin’s lymphoma. But Kota caught it in its early stages, and she is currently on the road to recovery. She had her third chemotherapy treatment in September.