The Powhatan High School field house was named in honor and in memory of the late Ernie Henderson on Sept. 24, 2021, prior to Powhatan varsity football's home game versus George Wythe. Henderson graduated from PHS in 1976 and was a multisport standout both in high school and college. He also positively impacted thousands of high school athletes as a coach at PHS from 1980 to 2020. 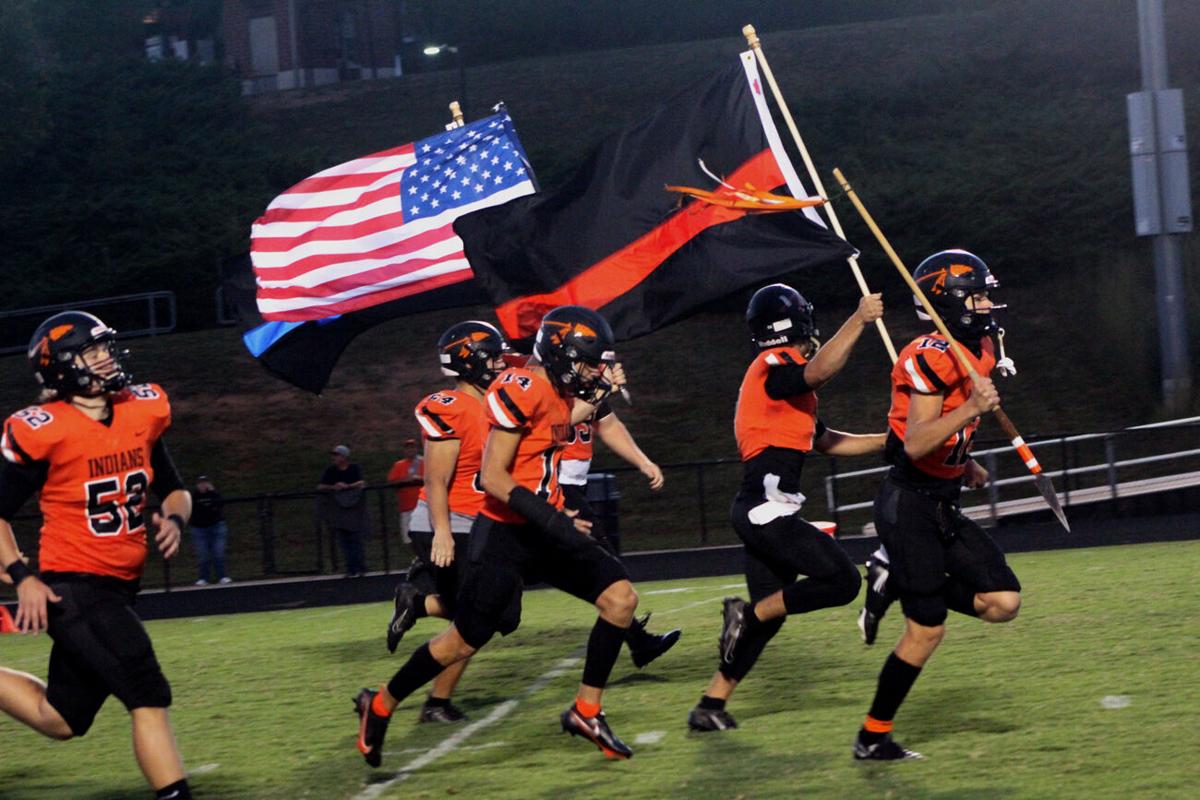 Powhatan's varsity football players take the field prior to the start of their home game versus George Wythe on Sept. 24, 2021. 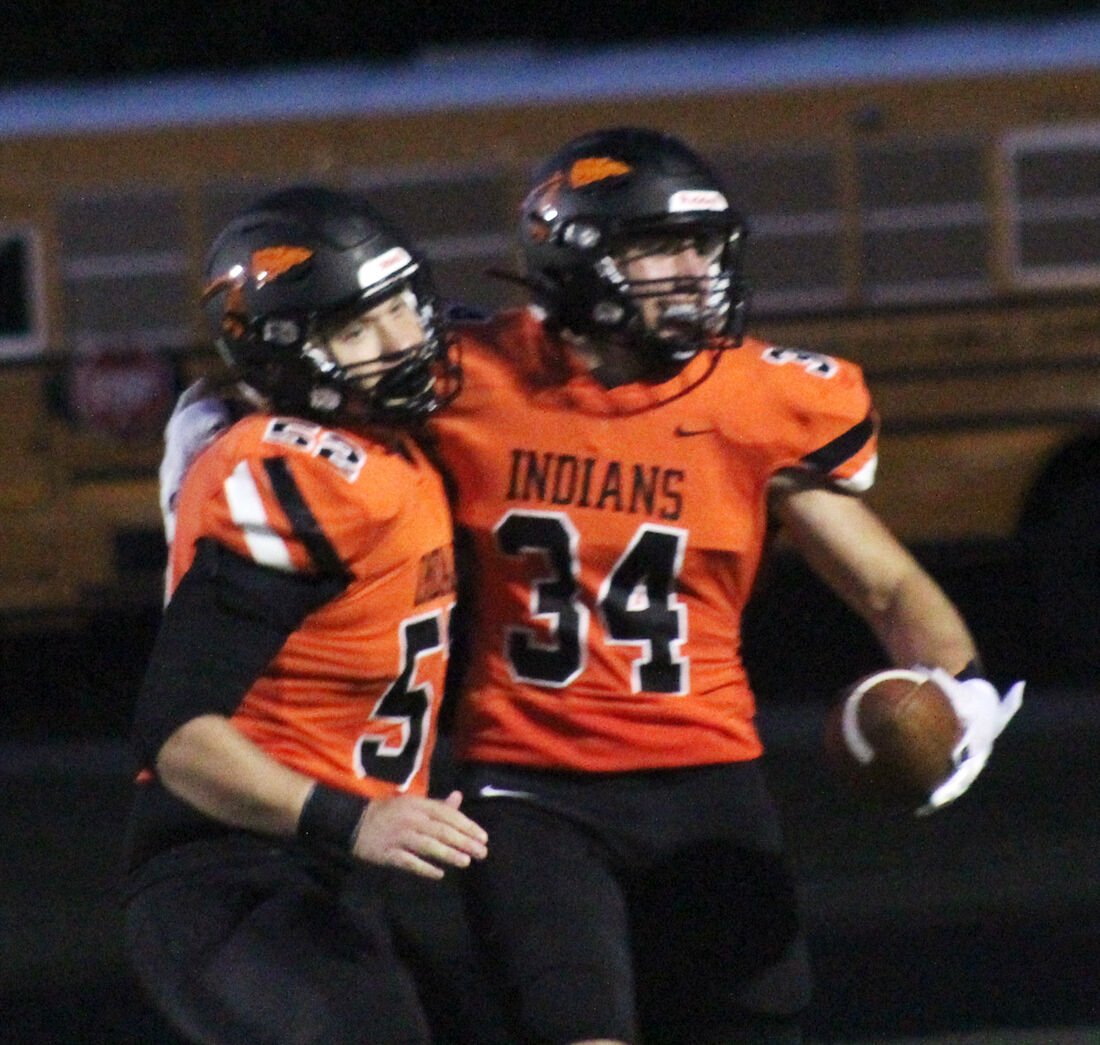 POWHATAN – The stands on the home team's side were packed with fans as the Powhatan Indians routed the George Wythe Bulldogs 42-12 on the night that the field house was named in memory, and in honor, of legendary Powhatan coach and athlete Earnest “Ernie” Henderson.

From 1985 to 2018, the tandem of Jim Woodson, as the head coach, and Henderson, as the defensive coordinator, helped lead Powhatan football to 16 district titles, eight regional crowns, two state runner-up finishes and state championships in 1996 and 2003.

Henderson was deeply beloved by those in the Powhatan community and beyond. He was known as a man of few words, but when he spoke, people listened. He was described as being tough but fair. As someone you’d run through a brick wall for. A life coach. A brilliant defensive mind. A father figure. And a true friend.

He was known for putting the kids first, and for helping Powhatan student athletes be the best they could be in sports – as well as in life – across his 40 years of coaching multiple sports at PHS.

Henderson had a saying: “It’s all about the kids.”

Those words are now immortalized on the sign that bears his name on the field house next to Powhatan High School’s football field.

Athletic director Tim Llewellyn and assistant athletic director Steve Washburn unveiled the field house’s new name during a special ceremony prior to the game. There are seniors on this year’s varsity football team who got to play for Henderson when they were freshmen. Nathan Mullins, who is part of Powhatan football’s coaching staff, both played under and coached with Henderson. Mullins was able to give a talk to the players before the game.

Powhatan needed only six plays of offense to score four touchdowns in the first quarter. On the Indians’ first play after Ethan Dowdy returned the game-opening kickoff 30 yards to Powhatan's 44-yard line, Mitchell Johnson rumbled into the end zone on a 56-yard romp. The senior running back’s tremendous season continued as he churned out 137 yards and two touchdowns, including a 21-yard score in the first quarter, on just five touches.

Dylan Trevillian completed 6 of 6 passes for 77 yards and three touchdowns. Fisher Hamersley made three catches for 40 yards and two touchdowns from 9 and 23 yards out. Dowdy fielded Trevillian’s 26-yard pass in the end zone for a touchdown during the offensive unit’s third play of the game.

Powhatan senior Andrew Cheatham scored on a goal-line rush to elevate the Indians’ lead to 42-0 before halftime.

Miller Kiernan led Powhatan’s defense in sacks with two on the night, and Darius Reddick dished out six tackles, including two for loss and one sack. During George Wythe’s second series of offense, Chase Gayness led the way as the defense tallied up three consecutive tackles for loss or no gain. Jamison Britt recorded six tackles on the night.

“The guys did everything we asked them to do,” Powhatan head coach Mike Henderson said. “We had a good week of practice and executed real well tonight.”

Powhatan kicker Tucker Thomas landed 6 of 6 PATs. His last point hit the lower bar but bounced forward to clear the uprights and keep his extra-point percentage for Friday at 100. Thomas also got to contribute to Powhatan’s halftime festivities when he played the trombone as part of Powhatan High School’s marching band.

Many different players were able to take the field for Powhatan in Friday’s game.

“It feels amazing to come out here and get the other guys a chance that don’t really play that much and just develop some growth in the program,” Thomas said. He added of the home crowd: “It’s nice having a student section back compared to last year. It’s a whole different experience.”

Powhatan (3-1), which bounced back from last week’s home loss to Manchester, will host Monacan this coming Friday. Kickoff is currently slated for 6 p.m.

“Trying to turn this into a little bit of a rivalry with these guys,” Henderson said. “It should be a good one next week.”

The Powhatan High School field house was named in honor and in memory of the late Ernie Henderson on Sept. 24, 2021, prior to Powhatan varsity football's home game versus George Wythe. Henderson graduated from PHS in 1976 and was a multisport standout both in high school and college. He also positively impacted thousands of high school athletes as a coach at PHS from 1980 to 2020.

Powhatan's varsity football players take the field prior to the start of their home game versus George Wythe on Sept. 24, 2021.