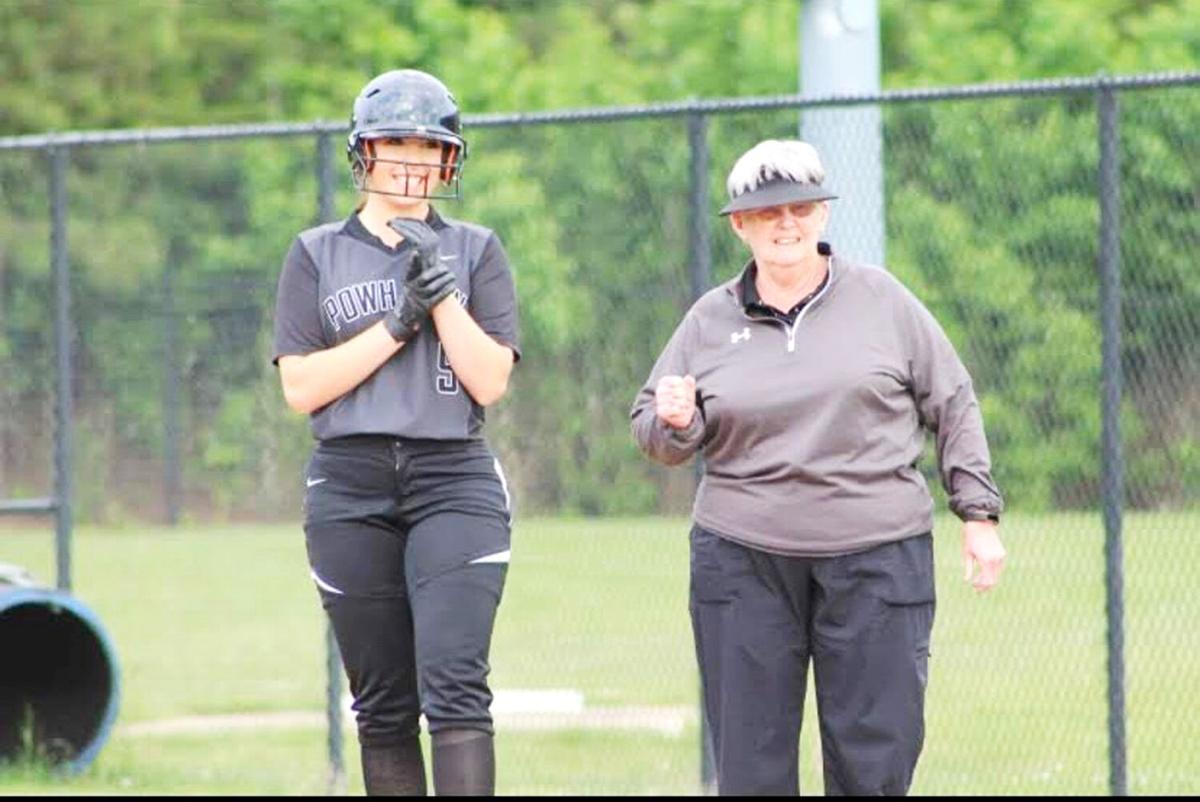 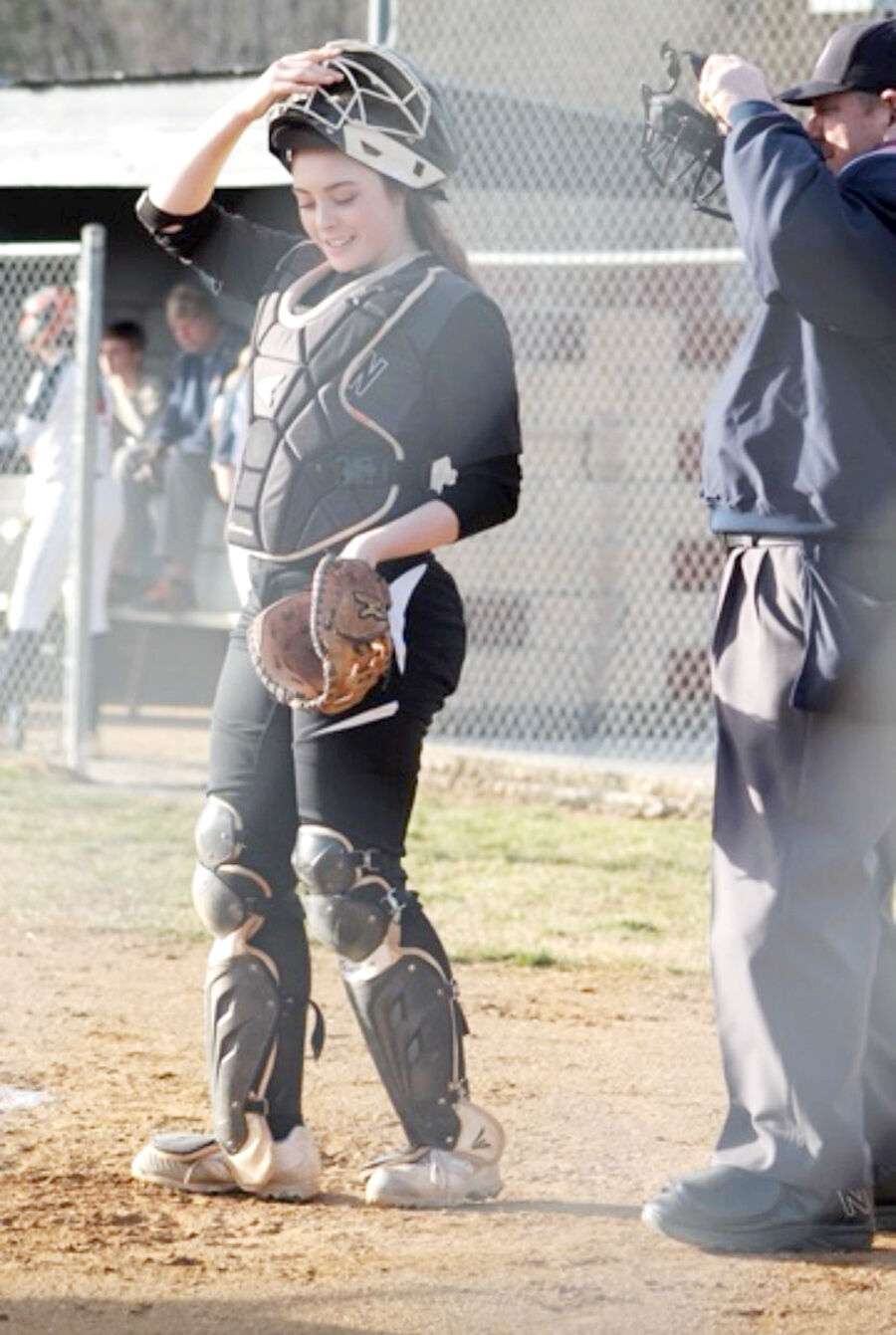 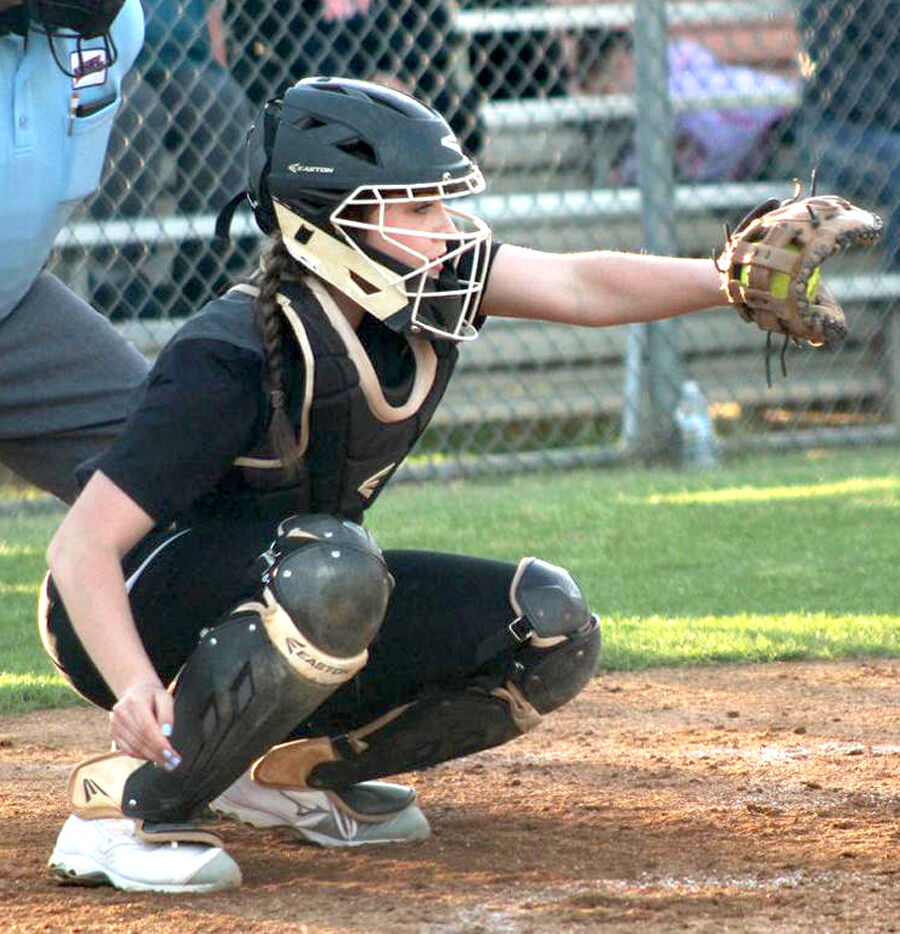 Powhatan's Emmalee Lawson catches in a 2019 season game for Powhatan.

POWHATAN – Her playing career will continue.

Powhatan High School senior Emmalee Lawson recently made her commitment to the two-year junior college of Richard Bland, where she will compete for the women’s softball team.

“It’s seriously a blessing,” said Lawson, who plays at the catcher position on Powhatan’s varsity softball team. “Once the pandemic hit, I was not looking to play college ball, or didn’t even know if my health was going to be okay to play college ball, so once (Richard Bland softball coach Jessica McCabe) reached out to me, it was like: ‘Maybe I can,’ and it really opened my mind to believe in myself more.

“It really built up my confidence,” Lawson said, “and pushed me to make the decision.”

Initially, Richard Bland College (RBC) was not on her radar, and Lawson had known that she wanted to study architectural design, which she said very few Virginia schools have. But after McCabe contacted her, asking to meet, Lawson “instantly loved her ideas for the team and her vision.”

“And I think we just have a similar mindset that really helped me feel like I could continue playing.”

Academically, it turned out to be perfect for Lawson, considering she’s always wanted to go to James Madison University in Harrisonburg, and through studying for two years at RBC, she could transfer from there to JMU. Lawson had originally planned to go to JMU and play club ball, but after talking to the coaches and getting to understand how Richard Bland was set up, she realized: “It was just meant to be.”

“They had everything I needed, all of my classes to transfer over,” Lawson said, “and since it’s a small campus, which was exactly what I always wanted. It was just perfect – close to home; (I’ll be able to get) very close with my teachers.”

Lawson, who has played softball for nine years, loves how challenging the sport is – “how there’s never a dull moment; there’s so much happening, and you have to assess and think about every play, and then you also just build great bonds with everyone you meet.”

She was recruited as a catcher. From behind the plate, she loves how she can see everything and visualize the plays before they even happen.

“I love the bond I get to build with my pitchers and everyone on the team, how we can all communicate without even talking.”

In Lawson’s freshman year on varsity in 2018, Powhatan’s talented, senior-heavy softball team made it all the way to the state championship game.

“It was just an incredible experience to see and be a part of a team that has so much grit to make it all the way there.”

One of the seniors and catchers on that team, Teri Jackson, also committed and went to Richard Bland.

“I’ve always just looked at her as such a great team player and had so much sportsmanship,” Lawson said. “After watching her play at Richard Bland for a game, all of the girls just seemed so upbeat and together, and then after talking to Coach McCabe, she just seemed like she had such a great mindset and knew what she wanted to get done.”

Even with several newcomers to the 2019 varsity team, Lawson and her Powhatan teammates achieved a 15-6 record and reached the regional semifinals. Lawson’s highlights included a defensive gem of a performance in Powhatan’s 2-1 regular-season win over Monticello. Immediately after clasping the pitch from teammate Sarah English on a called strikeout, Lawson hurtled the ball from behind home plate all the way to shortstop Maddy Hayden at second base to catch a Monticello runner stealing in the fourth inning, and that was after Lawson had caught a pop fly in foul territory behind the plate in the second frame to help strand a runner at third.

Lawson emphasizes consistency in her game. She said she works hard no matter what, and she’s always one to go 100% in everything.

“I put the team first and me second; I’ve never let myself come before supporting my teammates,” Lawson said, “and I’m definitely known to be a loud one in the dugout; everyone says they can hear me from the other fields. But I’m just always so excited for everyone else.

“Even if I’m not doing my best that game, I’m going to cheer everyone on to the best of my ability, no matter what.”

“No one works harder than Emmalee, and her work ethic has helped her development offensively and defensively,” said Powhatan head softball coach Marie Crump. “We look forward to her senior season and are excited that she will continue playing softball at Richard Bland.”

Alongside the triumphs she’s earned, Lawson has also endured trials throughout her journey.

Lawson has postural orthostatic tachycardia syndrome, or P.O.T.S. It’s a condition that involves the body’s nervous system, and it most commonly affects women between the ages of 15 and 50. P.O.T.S. can cause a wide range of full-body symptoms, with fainting, brain fog, dizziness, headaches and exhaustion all among them. Lawson added that up-and-down motions can get to her.

But the big thing that all doctors have recommended immediately, Lawson said, is to exercise.

“I am so thankful that I have been athletic for most of my life,” she said. “Having softball and getting with a personal trainer who works with most sports, it just made my health so much easier to deal with, and kept me feeling like I was just like everyone else. It was never really something I had to tell people before they got to know me.”

And while P.O.T.S. has had a big effect on her life and softball career, Lawson said she’s “always made sure to never let it be an excuse and never let it stop me.”

“Once I told the coaches at Richard Bland, they said it just inspired them more to have me on the team,” Lawson said, “which made me really excited.”

And the medical team at RBC, Lawson added, is very understanding.

“It just made me feel like home,” she added of Richard Bland, “and everybody was so welcoming.”

Lawson has always been an advocate for staying healthy – for nutrition, fitness, mental strength, and physical well-being – and she said of RBC: “They all have such a great mindset on making sure everyone is their best self.”

For Lawson, it’s been a big honor to be a part of Powhatan softball “because it is just known everywhere.”

“I was always told that, if you were playing for Coach Crump and Coach (Linda) Farmer, that you were blessed, because they’re some of the best coaches in Virginia, and have been for everyone to know,” Lawson said. “It’s just been a great way to show me to be very intense all the time, and…to give it all you’ve got no matter what, and has really shown me that I do have the skills to play at the next level.”

After the 2020 season was cancelled due to the onset of the COVID-19 pandemic, Lawson and her teammates, among them several seniors, have all been waiting for this upcoming 2021 varsity softball season, which is slated to begin in late April.

“It’s so exciting to be able to represent Powhatan definitely through hard times like this, and show that we aren’t going to let it affect us,” Lawson said. “It was really heartbreaking last year seeing our seniors lose their last season, but it pushed us to work hard over the offseason, so we know that we’ll be able to come out even stronger definitely in this new district this year.”

For Blessed Sacrament Huguenot volleyball, the future is looking bright.

Powhatan's Emmalee Lawson catches in a 2019 season game for Powhatan.