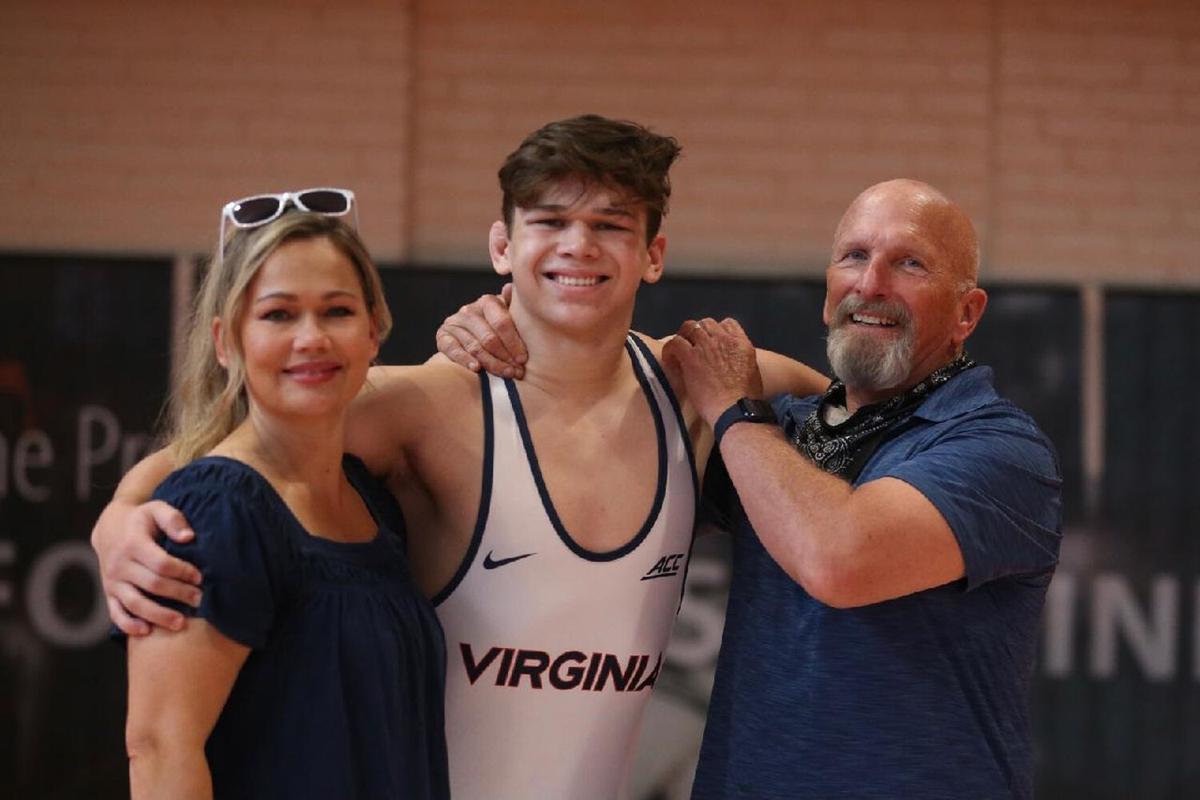 R.J. May (center) stands with mom April May and dad Don May. R.J., a Powhatan County student-athlete and Maggie Walker Governor's School senior, has committed to attend and wrestle for the University of Virginia. 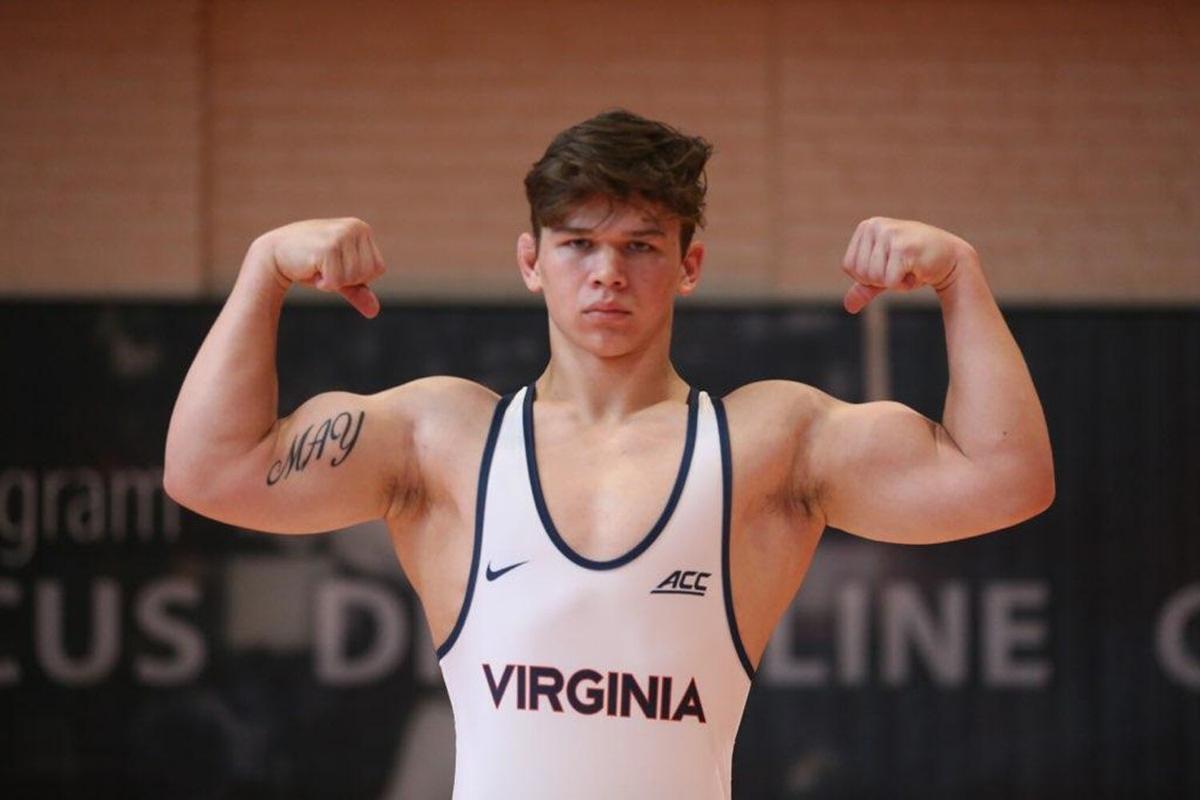 R.J. May, a Powhatan County student-athlete and Maggie Walker Governor's School senior, has committed to attend and wrestle for the University of Virginia.

He always strives to compete at as high of a level as he can in everything that he does, especially in a pursuit like wrestling – a pursuit that he loves so much.

The Powhatan County resident will get to realize his dream and pursue his passions at the University of Virginia, where he has made his collegiate commitment to attend classes and wrestle on the D-I mat.

R.J. really liked UVA’s coaches as well as the entire system that they have. He met all of the coaches at one of the program’s camps, and he really liked what they taught. The campus is beautiful, he said, and he enjoyed the facilities.

He researched the school, learned more about what it had to offer, communicated with the program and went on a visit.

“I found out it was the spot for me.”

Academics mean a lot to R.J. He scored a 1460 on his SAT test (in the 99th percentile) and currently holds a 4.2 GPA, and he praised UVA as a huge academic school – something he’s also really excited about.

To R.J., UVA is a school where he can achieve his academic potential – “academics have always been a main focus in anything I do,” he said – and where he can become the best wrestler he believes he can be.

R..J has met a lot of great guys on the team. He likes the attitude they have when they come to work.

And with UVA being a Virginia school, several of the wrestlers on the team – among them Atlee High School graduate Evan Buchanan and St. Christopher’s alumni Gray Hart, Erik Roggie and Loudon Hurt – have either attended school locally or are from around where he lives, so he knows some of them already.

“I’m really excited – I’ve always competed against kids in the area,” R.J. said, “so to get to further have that rivalry just gives you more motivation to better yourself.”

While R.J. is still growing, thus making it hard for him to project which weight class he will wrestle at in college, he currently expects that he’ll wrestle at 184 or 197 – “really just whatever the team needs me at.”

In high school, R.J., who attends and wrestles for Maggie Walker Governor’s School in Richmond, has excelled at three different weight classes in his career, winning the regional championships at 138, 160 and 182 pounds in his freshman, sophomore and junior years, respectively.

He won the 138-pound state championship his freshman year in 2019 – Maggie Walker’s last year competing in Class 2. Since the Green Dragons’ move up to Class 3, May has earned state placements of fourth at 160 as a sophomore and second at 182 as a junior. In his Class 182 state final, he took Dom Baker, who is a wrestler on the three-time defending Class 3 state championship team New Kent, to overtime, but Baker picked up an escape and a takedown to win the match and the title 4-1.

R.J. is set to wrestle at 182 again in his senior season, and he’s got a lot of unfinished business at the varsity level. He wants to be the first student-athlete from his school to win a Class 3 title in wrestling. He wants to have an undefeated season. He’s got his sights set on breaking 100 wins.

“I’ve got a lot of these goals set out that – they aren’t going to get done themselves,” R.J. said. “There’s a lot of unfinished business I’ve got. As much as it’s a preparation for college, I think it’s more of just an honor thing on my part where: just because I’ve found a school I can wrestle at, doesn’t mean I’m done.”

R.J. said that going up in weight classes has forced him to face adversity, which he feels is great for any athlete.

“I do think it’ll help me improve myself,” he said.

He spoke to always trying to be the most prepared guy on the mat. He lifts a lot of weights. He’s always training at Powhatan’s Blackhawk Gym and at VA Team Predator in Chester. He’s trained with his high school teammates at Maggie Walker, as well as with Atlee wrestlers and coach Gabe LaVey in Hanover and with coach Donald Motley in Virginia Beach.

A major part of R.J.’s growth as a wrestler has involved his neighbor J.D. McMillin, who now wrestles for Ferrum College. On the same day that May won his state championship for Maggie Walker, McMillin, then a senior, won his first state title for Powhatan High School. Both would go up to Blackhawk about five to six days a week and lift weights, wrestle around and make each other better and physically stronger.

“A lot of my growth has just been hard work,” R.J. said. “That’s kind of how I approach the mat, is that: I want to be the strongest kid on the mat. I want to outwork everyone.”

When he’s in the Predator Room in Chester, he’s drilling with those formidable wrestlers from New Kent like Baker and Nick Vafiadis. And right there in Powhatan, he can turn to coaches like Jonathan Tanaka and Zach Olson for advice and support.

“I can always bring a question to Coach Zach – we live real close,” R.J. said. “He’s always got ears for me.”

R.J. has also excelled in the classroom. According to his dad Don May, UVA head wrestling coach Steve Garland, who early in his career was an assistant coach at Cornell University, said that R.J.’s academics were the best academics he had ever seen in his 21 years of coaching in college wrestling.

When it comes to how R.J. has struck that balance between high academic marks and first-place efforts on the mat, he noted how his mom April has emphasized to him the importance of being a great planner and organizing what he’s going to do each day.

“It’s a lot of structure,” he said. “It takes a lot of initiative, but it has helped me progress in the classroom and in athletics greatly. I didn’t get to be a 1460-SAT, 4.2-GPA (student) while becoming a Division I wrestler by kind of winging it. It’s a lot of planning.”

Academically, he’s striving to graduate with a 4.4 GPA, and on the wrestling side, he’s looking to excel at the upcoming non-varsity wrestling meets. The Super 32’s are around the corner, and he’ll be able to take on the Beast of the East meet during the high school wrestling season.

“I’ve got a lot of big tournaments coming up that I can make a splash in,” R.J. said.

He definitely made a recent splash at the extremely tough Grappler Fall Classic, where he became an All-American. Before the high school wrestling season starts, it’s one of the toughest tournaments you can go to in the nation, he said.

“What I drew from that tournament is that I’ve got a great support system – my parents, willing to drive as much as they do, willing to pay for whatever I need wrestling-wise, all of my coaches at Predator. I have coach Zach Olson back at home diagnosing film. I can reach out to a lot of the Hanover guys and they can help me,” R.J. said. “I’ve got a great support system. It’s really a team effort. I’m out there wrestling on the mat, but there are so many people supporting me that it’s hard to really take credit for it myself.”

“I wouldn’t be where I am today if it weren’t for them.”

And to R.J., he couldn’t have better parents.

“I love my parents.”

R.J. May (center) stands with mom April May and dad Don May. R.J., a Powhatan County student-athlete and Maggie Walker Governor's School senior, has committed to attend and wrestle for the University of Virginia.

R.J. May, a Powhatan County student-athlete and Maggie Walker Governor's School senior, has committed to attend and wrestle for the University of Virginia.