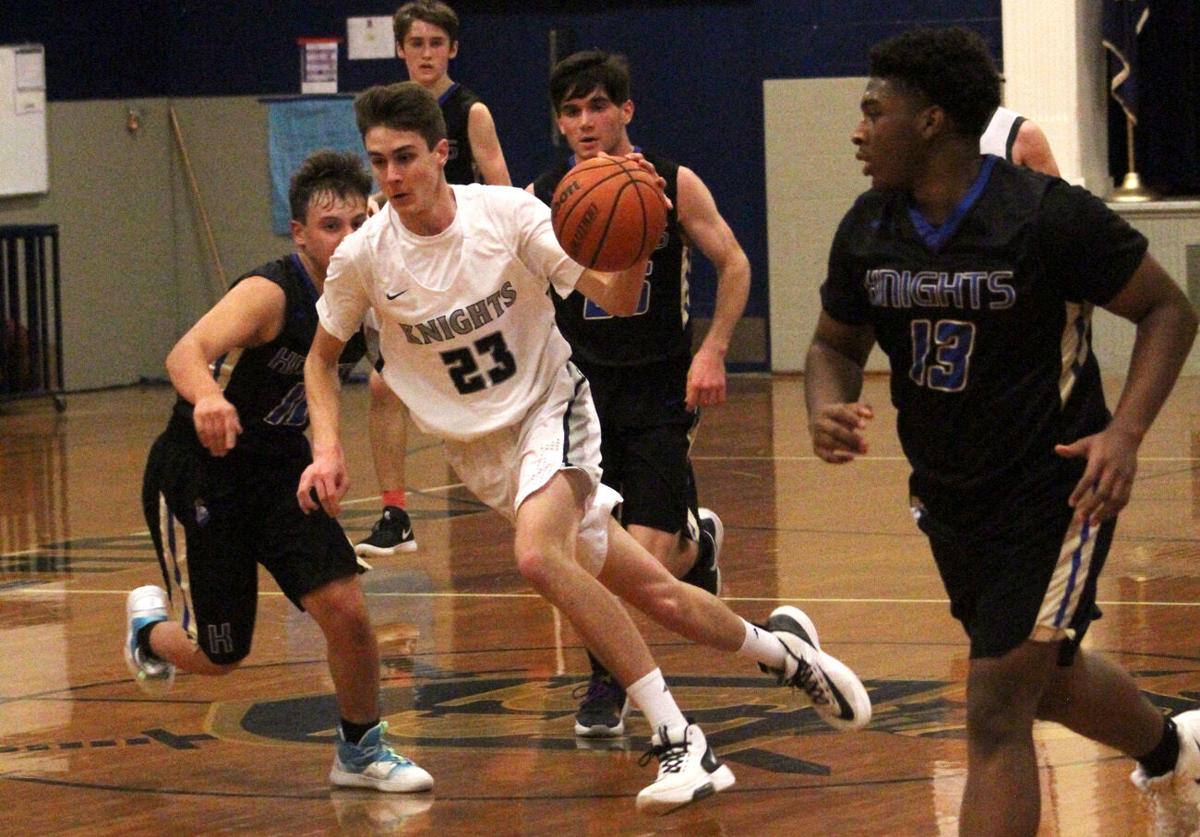 The Knights are entering a new era.

Raymond Avery and Robbie Kurtz, who both reached 1,000 points scored in the same game this past winter, graduated this summer after helping lead the Blessed Sacrament Huguenot varsity boys basketball team since their freshman year.

As seniors, the versatile duo helped BSH secure its first winning season (12-10) since 2015. But while this year’s very young Knights will no longer be able to turn to Avery and Kurtz for their tremendous leadership and scoring ability on the court, they do have their stellar example to follow.

This year’s returners include last season’s breakout player Zander Nadeau, clutch shooter Henry Kiefer and Carson Conner, who did not play much last year but showcased his athleticism in this spring’s short-lived baseball season.

“I will never be able to replace kids like Raymond and Robbie. They were two very special young men,” said BSH head basketball coach Chris Hamner, who along with coaches Griffin Flinn and James Poore have been together on the staff for four years including 2020-21. “They did, however, help Zander, Henry and Carson tremendously by showing them how to work hard.

“As good as Raymond and Robbie were, they had to work extremely hard for everything that they accomplished,” Hamner said. “If guys on the team this year, especially Zander, work that hard, we will be just fine.”

Nadeau was a consistent threat to score in the double-digits last season, and his impact this year is expected to increase. He grew a couple inches, now standing tall at 6-foot-5, and he’s able to both shoot the ball well and get it to the rim.

Conner and Kiefer, the latter of whom was another last year who could break into the double-digits any given night with his three-point shot, also bring shooting ability to this year’s unit.

Hamner expects the team to be good in the half-court. As far as improvements that he still wants to see from the team, he added that they will need to get a lot better with handling the ball.

“Defensively we will have to fill in a lot of spots,” he said. “I am hoping some of these young guys will step up.”

Hamner was hoping that they would be able to build upon what last year’s team did, but he added that it “is just very hard to tell, with all of the stuff going on in our world right now, how this year’s team will do.”

“We have only had three practices and there is so much emphasis on taking the proper health procedures that our practices look completely different,” Hamner said earlier this week. “This virus is just so scary and contagious that as a school, the first priority has been to keep them in the physical classroom, which they have been able to do, which is great. We will just have to see how things go.”

This year’s season, to Hamner, will be a successful one if, as a team, they compete every day and try to get better, and also if, as a coach, “I somehow make a positive impact on my players.”

He expects that the Virginia Colonial Conference, in which they will play exclusively this season, will be “very good top to bottom.”

According to the rSchool calendar, the BSH Knights will begin their season on Jan. 5 when they host Tidewater Academy, with the girls playing at 5 p.m. and the boys at 6:30 p.m.

“The thing that I am mostly looking forward to is just playing...I have one kid on my team .... I have been coaching him since the fifth grade,” Hamner said. “I just want them to be able to put the uniform on and be able to compete as seniors safely!”