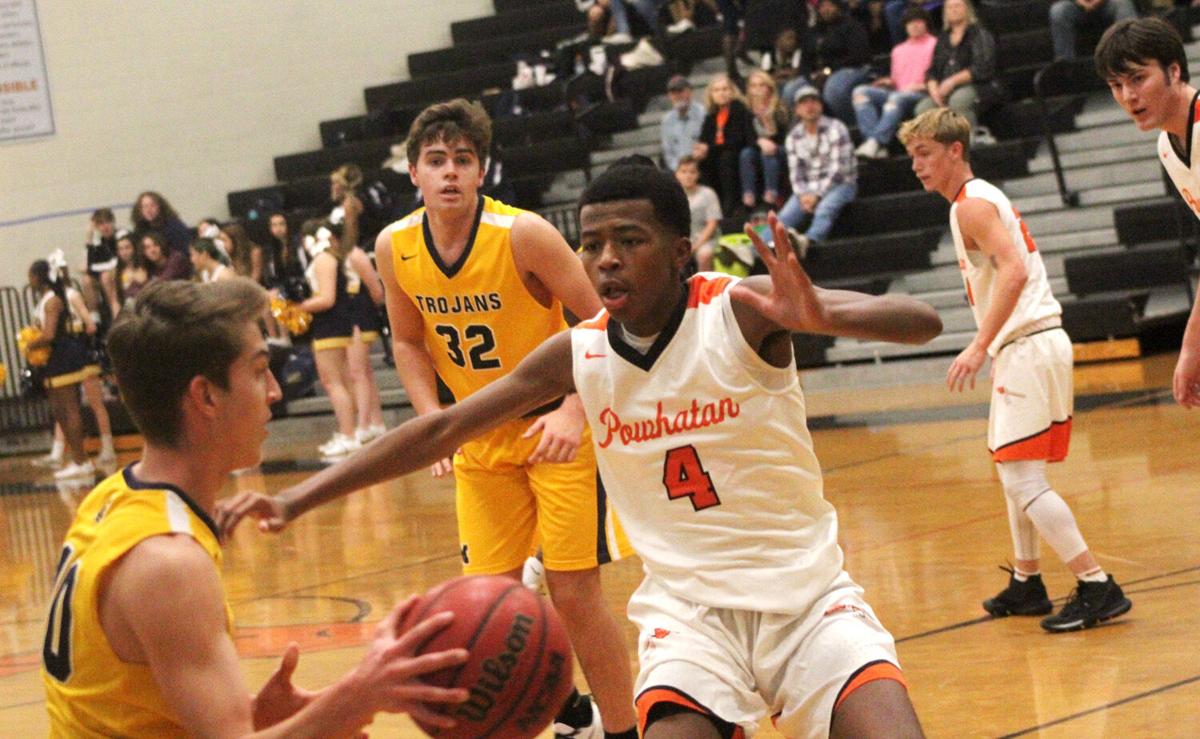 Senior Brylan Rather, seen practicing during the 2019 preseason, returns to help lead the Powhatan varsity boys basketball team in the upcoming 2020-21 season.

For last year’s mostly young and inexperienced Powhatan boys basketball team, the 2019-20 season was rough. The team won just two games against 20 losses in its first year playing in the grueling Dominion District.

But to say there were positives would still be an understatement. The Indians never gave up, earning both of those wins late in the season and triumphing over Clover Hill on Senior Night.

They also stayed together that entire year, and they kept getting better as the season went on.

As they prepare for games to begin in January, this group is one that Ryan Marable, in his second year as Powhatan's head coach, can’t wait to compete with.

“From our season last year, I feel like we still have something to prove to our new district,” added returning leader and senior Brylan Rather. “By winning two games and everything last year, I still feel like we’re the underdogs and I just want to prove to everyone that we can compete with everybody else in our district.”

Another senior with key experience, Jon “L.J.” Alston, is back to lead the team, as are fellow seniors Scott Wyman and Luke Buzzard.

“We experienced a lot coming into a new district, and I feel like, as leaders of this team, we learned also how to prepare our teammates as well as prepare ourselves for what’s coming up,” said Alston, who this year was able to play AAU basketball, with his opponents including players that he and his teammates are slated to face this regular season.

Rather said last year “helped a lot…experience-wise,” and that it can help them help the other players joining varsity this winter.

Players who are not only moving up from last year’s JV group but also picked up some varsity minutes in the 2019-20 stretch include sophomores Paul Bonner, Austin Hurt and Oscar Whitely. Peter Rusin is also moving up from JV, and point guard Matthew Hempfield, a junior who played in middle school with his current teammates, has transferred back to Powhatan from Fuqua.

Football players JaySun Carroll, Ethan Dowdy and Aaron Nash and baseball player Alex Reeves should all bolster the team with their length, speed, strength and athleticism. They should also add depth to the lineup and more competitiveness to practices, which in turn should better prepare the Indians for what they’ll see from their opponents in future games.

They’ll be able to see the game a little faster now, Marable said, as well as get up and down the court quicker and space the floor out more, Alston said.

The returners have been putting in the work this offseason, which Marable pointed to and praised. In addition to AAU, Alston participated in a couple of Hoop Group camps up North, including one in Strasburg, Pennsylvania. He spoke to working a lot on his own athleticism and shooting this offseason.

Rather has been focused on getting better through working in the gym and during practices, and as a team, he said they’ve been working on their ball handling and shooting.

Marable anticipates that the players will really cut down on their turnovers, which he noted really hurt them last year.

“This group, we can trap, we can press a little bit more, and we can turn good defense into easy opportunities for us to … maybe get some layups that we really didn’t get last year,” Marable added.

Powhatan wants to put more pressure on opposing teams and force those teams into making more turnovers than they did last year.

“We’re going to have to buy-in to team rebounding because we don’t have that natural center,” Marable added. “Our little guys are going to have to stick their heads in there and grab some rebounds – and knowing that, if they grab it, they can go and they can push it and we can get back down to the offensive end.

“A rebound is going to be like a turnover for us,” Marable added. “We can really capitalize on bad shots from the other team and use that to our advantage like teams did against us.”

As the season goes on, team improvements that returning seniors Alston and Rather want to continue to see include communication, chemistry and knowing each other’s tendencies and capabilities. Alston also emphasized the importance of being leaders on the team.

“Our leadership this year – us being leaders and really pushing each other will help us,” Alston said. “It all starts at the top, and so I think, from coach to us to our teammates, that we’ll really be able to push each other and definitely help each other and have a better season this year.”

And this year’s team, Marable said, is getting along really well.

“Practices are really fun because they’re all friends off the court and they’re all together off the court, and then they bring that togetherness onto the court,” Marable said. “We think that’s really going to help us in the long run, and they’ve experienced adversity together on the football field and in their middle school seasons and things like that …it’s kind of like getting the band back together a little bit.”

While Powhatan did lose two opponents in George Wythe and Huguenot due to the Richmond school system’s decision not to play winter sports this year, the team will play its 14 regular-season games against the remaining schools – all from Chesterfield County – in the Dominion District. According to the Richmond Times-Dispatch, Chesterfield County schools are planning to start playing games the first week of January.

Powhatan’s first scheduled game is on the road at L.C. Bird on Monday, Jan. 4. Varsity is supposed to play at 7:15 p.m. following the JV team’s game at 5:45 p.m. But uncertainty over whether the season will take place in full or at all still remains as the pandemic continues and schools could still opt out of winter sports.

After all of the work he’s put in this summer and fall, Alston aims to reap the benefits of all that hard work by just getting out there and playing on the court this season. And if the players do get to compete this year, then they deserve it, Marable said.

“They followed all the protocols all offseason and really put us in a position to be here,” he said. “I’m proud of those guys and … all the sacrifices they made, and really all the other sports and students have at Powhatan, too, because they’ve gone above and beyond with what they needed to do and made us be in the position to practice and to participate.”

Senior Brylan Rather, seen practicing during the 2019 preseason, returns to help lead the Powhatan varsity boys basketball team in the upcoming 2020-21 season.