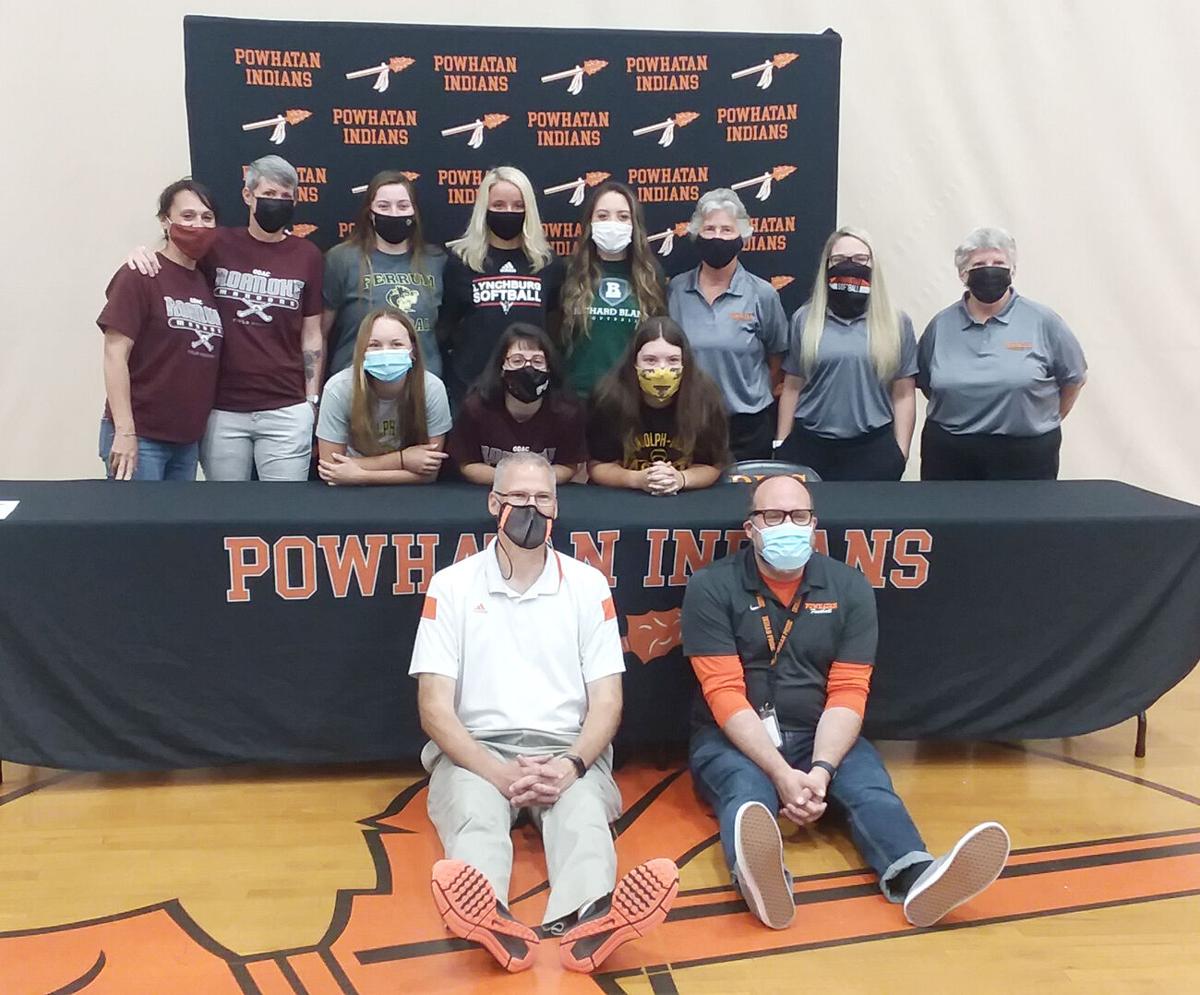 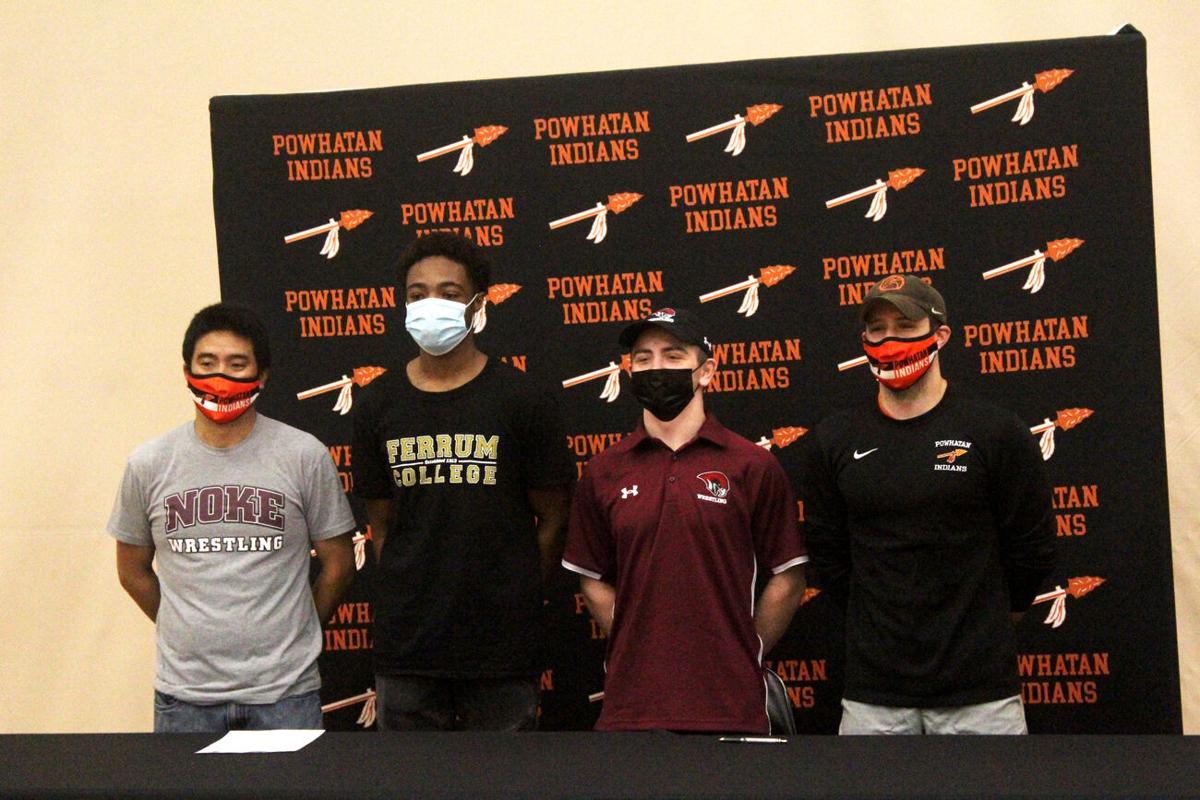 POWHATAN -- After nearly 15 uncertainty-filled months, eight of Powhatan High School's senior student-athletes were able to come together with their families, coaches, administrators, friends and teammates and celebrate the continuation of their academic and playing careers.

Barton and Davis will both play softball for Randolph-Macon College.

Barton has wanted to attend Randolph-Macon for as long she can remember; her sister started softball before her and took batting lessons with R-MC’s assistant softball coach, Chip Bailey. After every one of her sister’s lessons, coach Bailey would take the time to let Barton hit as well.

“I fell in love with the campus and atmosphere of the school immediately,” Barton told the Powhatan Today last fall, adding: “I feel like all my hard work has paid off, and that’s something I’m proud of...I’m super excited to play in college and can’t wait to continue working hard and getting better.”

Barton last fall spoke to wanting to major in Pre-Law and pursue a career as an IP attorney or family lawyer.

She'll be joined by Davis, who, after a visit to Randolph-Macon, knew she could see herself there, both academically and athletically.

“The players and coaches are amazing. The players answered all the questions I had about softball and about college in general,” Davis said last fall. “The coaches have also helped me tremendously throughout the process. The school is beautiful and small, which I like.”

She’s looking forward to still being able to play softball while pursuing the degree that she wants: a Bachelor of Science in Nursing degree. She wants to become a Certified Registered Nurse Anesthetist after college.

English will take her softball career to Lynchburg University. From the minute she stepped onto the campus, she immediately fell in love with the environment.

“I was looking for a college with smaller class sizes, and this is exactly what Lynchburg had to offer," English said last fall, adding: “Lynchburg has a great softball program and coaching staff that makes you feel at home...Coach (Dawn) Simmons is very open to talk with and encouraging to her players both on and off the field.”

She plans on majoring in Elementary Education with a concentration in Special Education.

“It feels great to know that all my hard work has paid off,” English had said, “and that I have accomplished my dream.”

Lawson is headed to Richard Bland College. Initially RBC was not on her radar, and Lawson had known that she wanted to study architectural design, which she said very few Virginia schools have. But after coach Jessica McCabe contacted her, asking to meet, Lawson “instantly loved her ideas for the team and her vision.”

“And I think we just have a similar mindset that really helped me feel like I could continue playing.”

Academically, it turned out to be perfect for Lawson, considering she’s always wanted to go to James Madison University in Harrisonburg, and through studying for two years at RBC, she could transfer from there to JMU.

“It’s seriously a blessing,” Lawson said in March. "Once (Coach McCabe) reached out to me...it really opened my mind to believe in myself more.

“It really built up my confidence,” Lawson said, “and pushed me to make the decision.”

McMillen will compete for Ferrum College.

“I’ve wanted to play softball in college ever since I can remember, so, to me, it’s looking back and seeing everything that got me where I am today, and I am very excited to be pursuing that dream: playing at Ferrum College," McMillen said last fall, adding: “I am thankful for Coach [Gerald] Culler giving me that opportunity.”

McMillen complimented Ferrum's small size, academic atmosphere and physical therapy program, and when she visited the school, the team and coaches seemed like a family – which, McMillen said, is important in softball – “and just knowing you have someone to be there for you in college when you leave your own family.”

Barton, Davis, English and Lawson all contributed to Powhatan's young team achieving a 15-6 season and reaching the regional semifinals in 2019, and McMillen, playing her first varsity season after COVID-19 shut down all Virginia high school athletic activities last spring, is quickly making an impact. She also had two strong scrimmages prior to the shutdown.

"To see it finally culminate with them being able to sign and know that they're moving on after high school – all the hard work they've done all the way up from when they very first started softball through high school, and it doesn't just start in high school, it starts before that – and just to see them have this opportunity is great," Crump said. "They're great leaders. They are very determined young ladies, and it's going to be tough to see them graduate."

Thompson, who was Powhatan field hockey's lone senior this season and was part of the field hockey program since eighth grade, will continue her playing career at Roanoke College.

After personnel from Roanoke came out and saw her at a tournament, Thompson visited there, and it sparked her interest.

“The girls were really nice when I went there," Thompson said on Powhatan field hockey's Senior Day in March. "The coach was super nice. I’m really looking forward to it.”

Thompson looks forward to remaining a leader, and to not being shy.

“It’s going to be a little nervous at first, just because: freshman year,” Thompson said, “but other than that, I think I’m just going to keep doing me and keep staying positive.”

Powhatan field hockey assistant coach Caryn Rehme, who held the role of head coach for this spring season, and head coach Stephanie Tyson praised Thompson as a great player, great leader and great person. The senior was key to Powhatan achieving a winning 6-5 season and reaching the Class 4, Region B playoffs this spring.

Rehme added that Thompson has been encouraging to her teammates, and that she set the tone for a positive atmosphere.

"Kaitlin's a great girl. Through the season, she got better, and I feel like both (Coach Tyson and I) feel like we're sending her off in a good place," Rehme said. "She's ready. I think she's confident, and it's exciting to know that she'll be able to compete with any of them."

"She's worked really hard. She plays in the offseason with the Panthers and she's always been a great leader even when she was younger," Tyson said, noting that Thompson was also a captain on the JV team earlier in her career. "This year she did a great job as a captain for (varsity). She's just a great kid. She's a pleasure to coach, she's got a good attitude. She always comes ready to work hard.

Attending Roanoke in addition to Thompson will be Hall, who will help start Roanoke's new wrestling team as one of the program's wrestlers. Hall has known the head coach, Nate Yetzer, since he was in fifth grade.

“They want really good leaders and motivators,” Hall said this past winter. “I feel like I can help with that a lot.”

Hall had praised Roanoke College, surrounded by mountains, as a beautiful campus, and he felt that the school’s small size will be good for him; he wants to be a chiropractor, so he needs that close interaction with his teacher, he had said.

“I’m excited to see how much better I’ll get when I get there,” Gaskin said on Senior Night this past winter. “I’m excited to go down there and wrestle with them next year.”

He likes the environment at Ferrum, and he pointed to how McMillin has gotten a lot better since he started wrestling there.

“I just want to go down there in an environment like that,” Gaskin said, “where everyone’s like family.”

"Super excited for Sean and A.J. both to continue their careers," said Powhatan head wrestling coach Jonathan Tanaka. "They've been in the Powhatan wrestling program, in youth and wrestling, for so long. They've dedicated a lot of time to the program."

Tanaka said that Hall "has just been a model of consistency" and pointed to his high-level performance in the middle of the lineup throughout his four-year varsity career.

"The last two years he's done a phenomenal job just being a leader and stepping up and helping us, being a leader on the mat, being a coach on the field, so to speak," Tanaka said. "I don't think we can measure the contributions that Sean has given to the program, but I think you'll see his legacy kind of live on and hopefully see kids try to be the next Sean Hall as they grow up."

While Gaskin's high school career didn't start off the way he had wanted it to do, Tanaka was "really proud of him fighting through adversity and figuring out what he had to do to get better."

"He did a phenomenal job improving himself throughout his high school career," Tanaka said, pointing to "the amount of improvement we've seen in him physically, and the maturation of A.J. as a person is what we're more actually excited about or proud of."

Making this 2020-21 athletic season even more special for all of the eight student-athletes who signed is that, even during the ongoing pandemic, they were able to have their senior seasons earlier this year and/or get the opportunity to compete this spring. For Powhatan's softball seniors, their 2021 campaign is under way after they lost last year's season.

"I think it's wonderful they're getting to be back on the field this year and play for high school," Crump said. "Last year we felt so bad for all the players, especially the seniors, but for these young ladies to have the opportunity to come back and have the opportunity to play their senior year at Powhatan High School is great."

During the first session of signings on Wednesday, Powhatan Athletic Director Tim Llewellyn said of the student-athletes: "The perseverance and the dedication these kids have shown in some really rough times– and hopefully, we won't ever see anything like this again in our lifetime – but the way they handled themselves has been amazing."