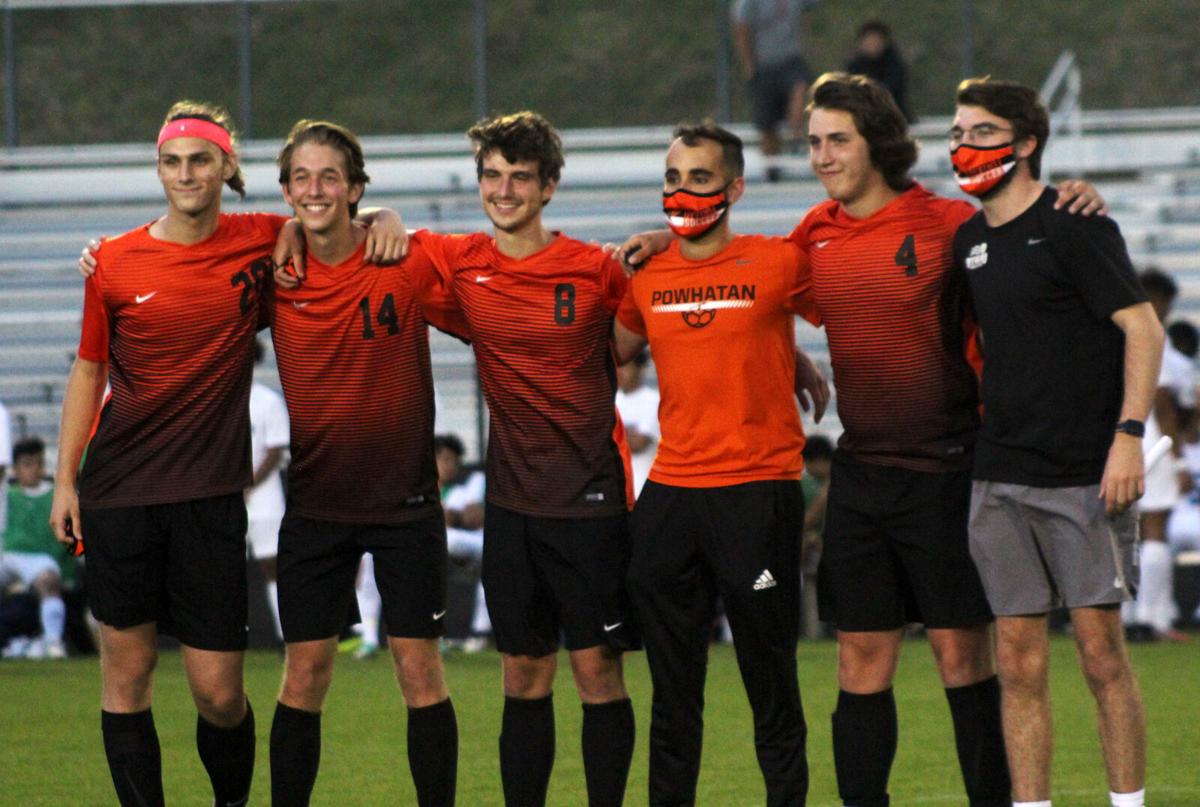 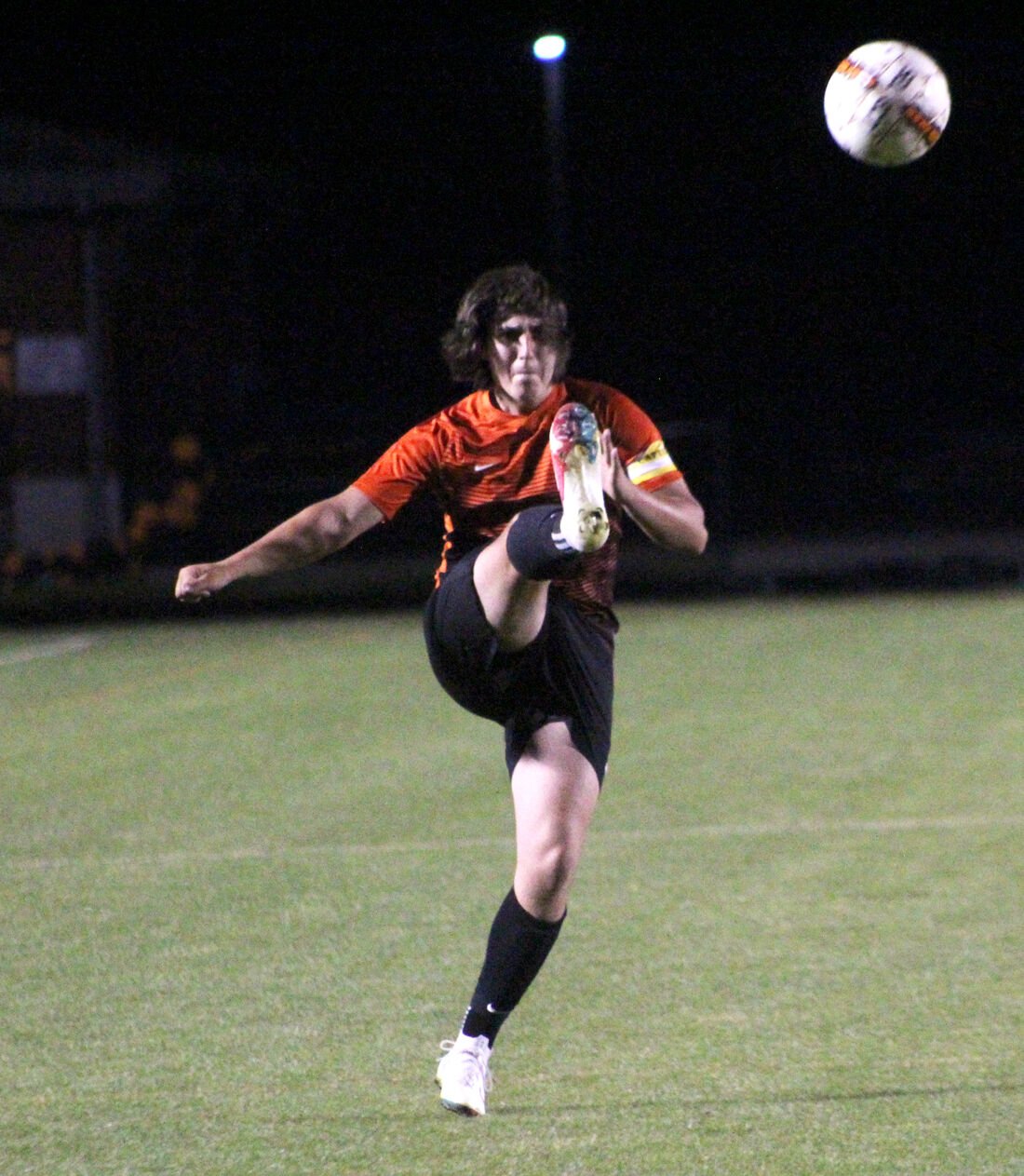 Powhatan High School senior Zach Shelor launches the ball on a rocketing kick towards the goal in the second half of Powhatan's boys varsity home game versus L.C. Bird on April 29, 2021. 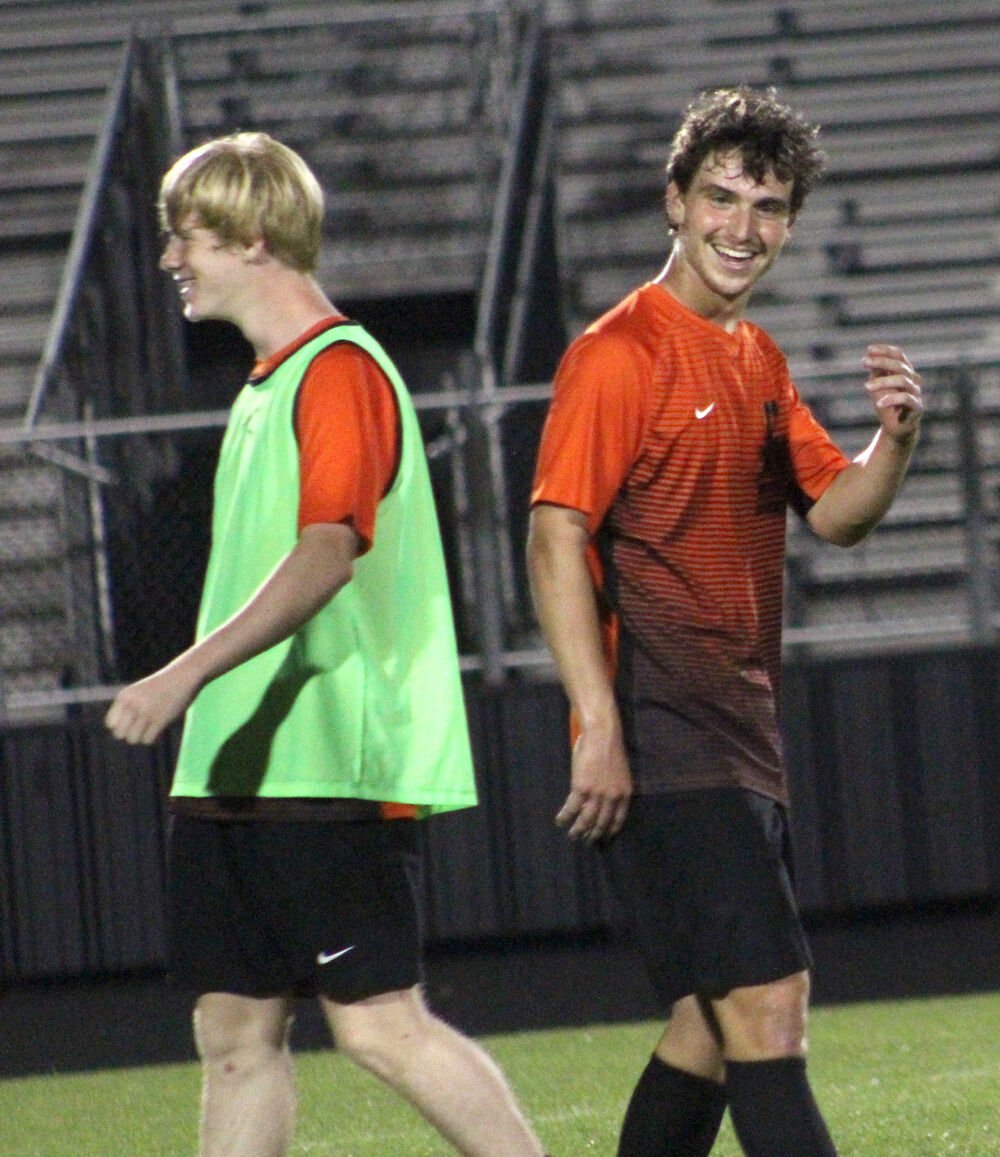 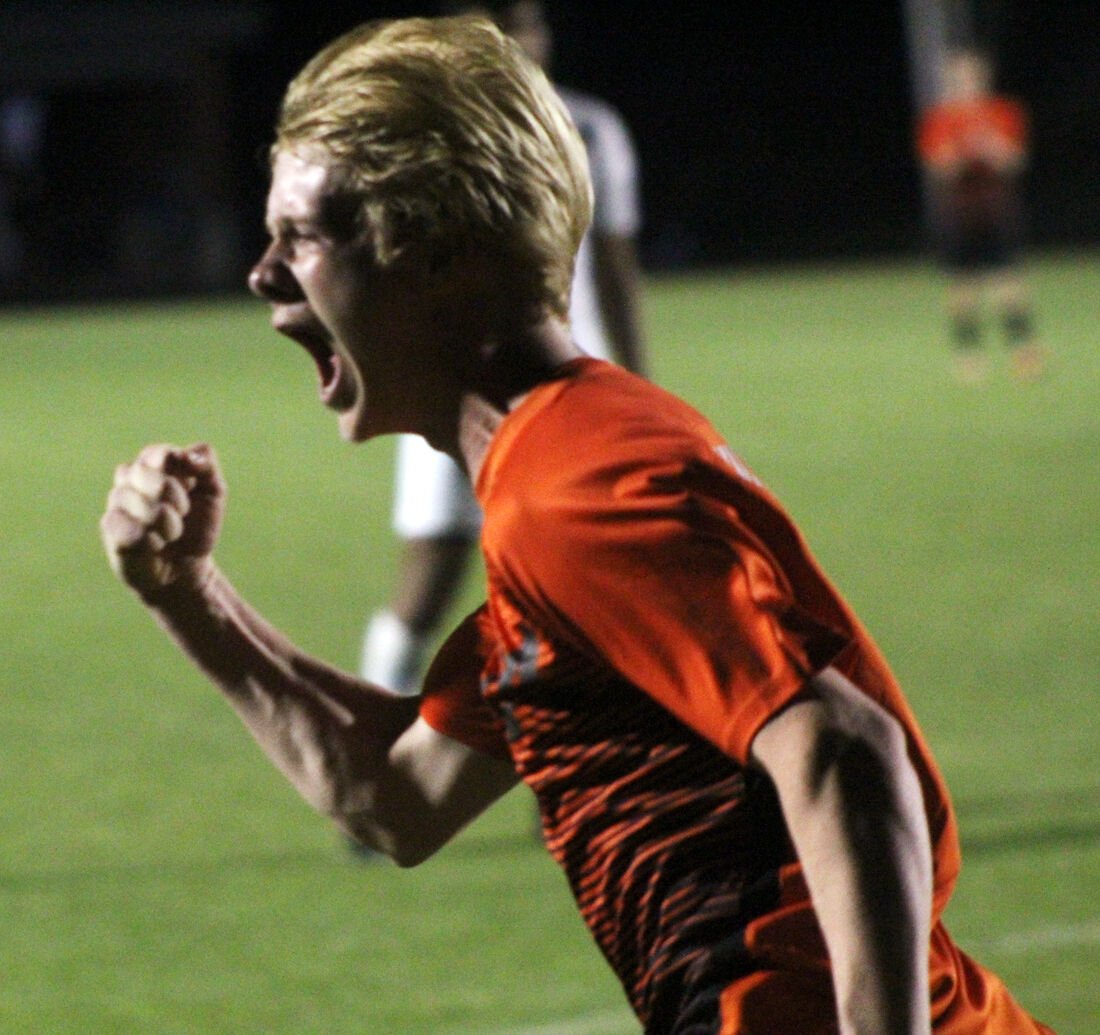 POWHATAN -- More than a year after the COVID-19 pandemic wiped out what would have been his first regular season leading the Powhatan's varsity boys soccer team, head coach Willie Miles finally got to celebrate his first win at the helm when the Indians powered past L.C. Bird 3-1 with the help of two goals in the second half.

"It feels amazing," Miles said. "We lost a great amount of leadership on that (2020) senior class, a lot of minutes that were there. But I am very confident in this group moving forward. We just have to stay composed. Our big philosophy is outworking our opponents and just showing what Powhatan soccer is all about.

Thursday night's game against Bird was also about celebrating the team's four seniors, as captain Zach Shelor, Jackson Tester, Cooper Schardt and Stevie Bigham were honored on Senior Night. All four started in the lineup on Thursday. Tester throughout the night moved the ball up from midfield and narrowly missed scoring on a far-traveling shot in the first half.

Shelor, whom Miles said has led by example, sparked Powhatan's first two goals of the night after the Skyhawks had grabbed an early 1-0 lead. In the first half, Shelor cleared the ball out of the defensive end, and sophomore teammate Paul Bonner picked up the ball and passed it on to junior teammate and UVA commit Parker Sloan.

With the immediate space on all sides of him clear and his incendiary speed on his side, Sloan chased the ball up to the goal. He footed it through the keeper's legs and into the bottom netting to tie the game at 1-1.

In the second half, Shelor launched the ball towards the goal on another rocketing kick, and sophomore Connor Nickerson drove it in with a header. Nickerson immediately unleashed a joyous outburst upon scoring his first-ever varsity goal, which put Powhatan ahead of Bird at 2-1.

The Indians added an insurance goal in the closing stages when Bird's goalie and another defender went for the save and missed, and Sloan, getting a hold of the ball, passed it to Schardt, who landed the wide-open short-distance shot up the middle.

"Cooper's a man that just grinds it out and does everything for the team, truly. Always asks me what he can do better each and every practice, how he can improve," Miles said. "I'm glad he got that moment. I'm glad he can contribute as a team member."

Schardt also had a huge clear-out on defense towards the end of the game, and junior keeper Tucker Thomas made several big saves to hold the Skyhawks to one goal on the night.

Miles noted that there's a lot of young talent to build around on this year's team. The 2021 varsity program features nine sophomores and freshman Brayden Elzey. He praised the team's commitment to "each and every chance that they have going on."

"They essentially are here to play the right way," Miles said. "We have to clean up some things within our game, but tonight, compared to our first contest against Cosby, they did a much better job possessing, moving the ball around, looking up and going from side to side."

After bouncing back from a 5-0 season-opening home loss to Cosby with Thursday's triumph over Bird, Powhatan will host Clover Hill next Tuesday at 7 p.m. and James River next Thursday at 7 p.m.

"This effort as a team right now is up. We've got to keep it up; we can't be complacent," Miles said, "and if we keep going at the right angles, we can generate more results like this."

As the Indians are taking on their first regular season in the Dominion District (last year was supposed to be their first), they're looking to get to that .500 mark.

"That five- to six-win mark is achievable with this group if they stay together, we make the right impacts here and there and they truly see the field with each other," Miles said. "It's not a one-man team. It's truly an 11-man team."

Reach out for help when in need of support

POWHATAN – Back in March, I had a bad day.

Powhatan High School senior Zach Shelor launches the ball on a rocketing kick towards the goal in the second half of Powhatan's boys varsity home game versus L.C. Bird on April 29, 2021.