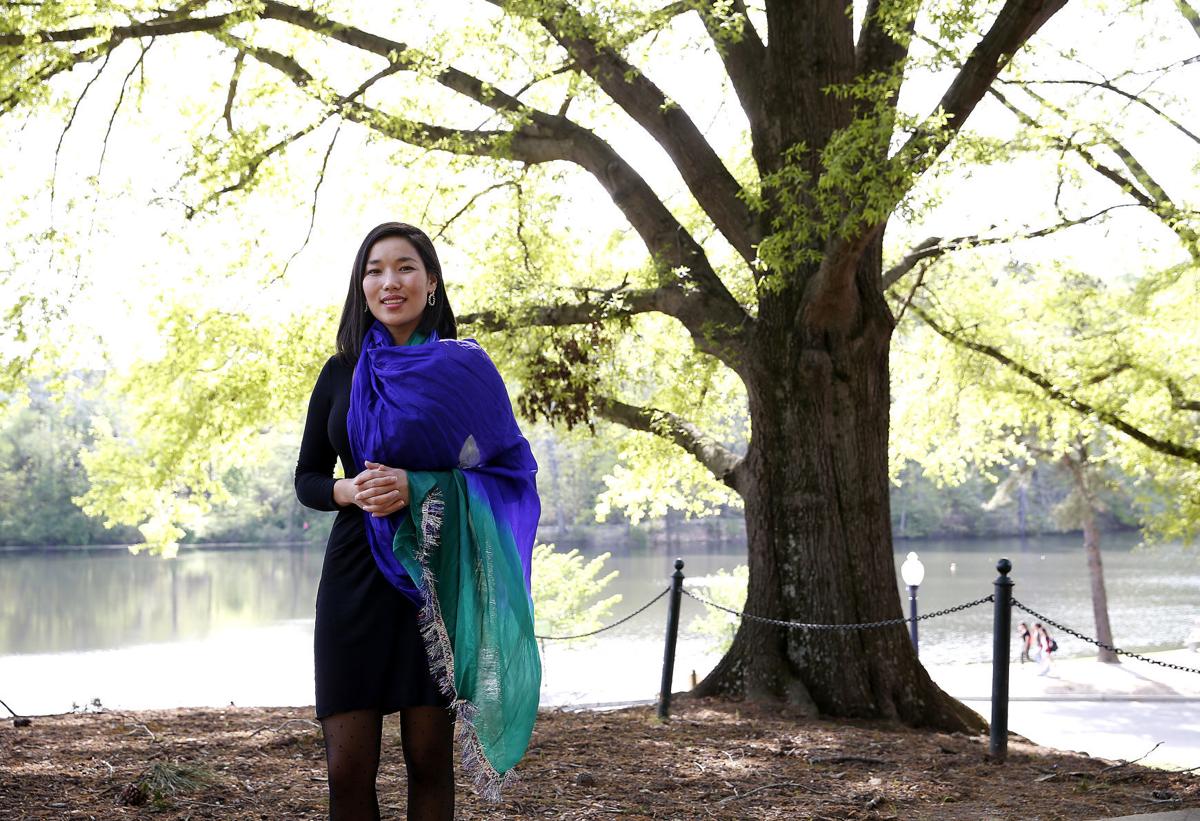 Lina Tori Jan, a rising senior at the University of Richmond, grew up in Afghanistan and remembers hiding from the Taliban in the basement of her home. "I just wanted to make it through," she said. (FOR ADDITIONAL IMAGES, CLICK ARROWS IN UPPER RIGHT OF PHOTOS.) 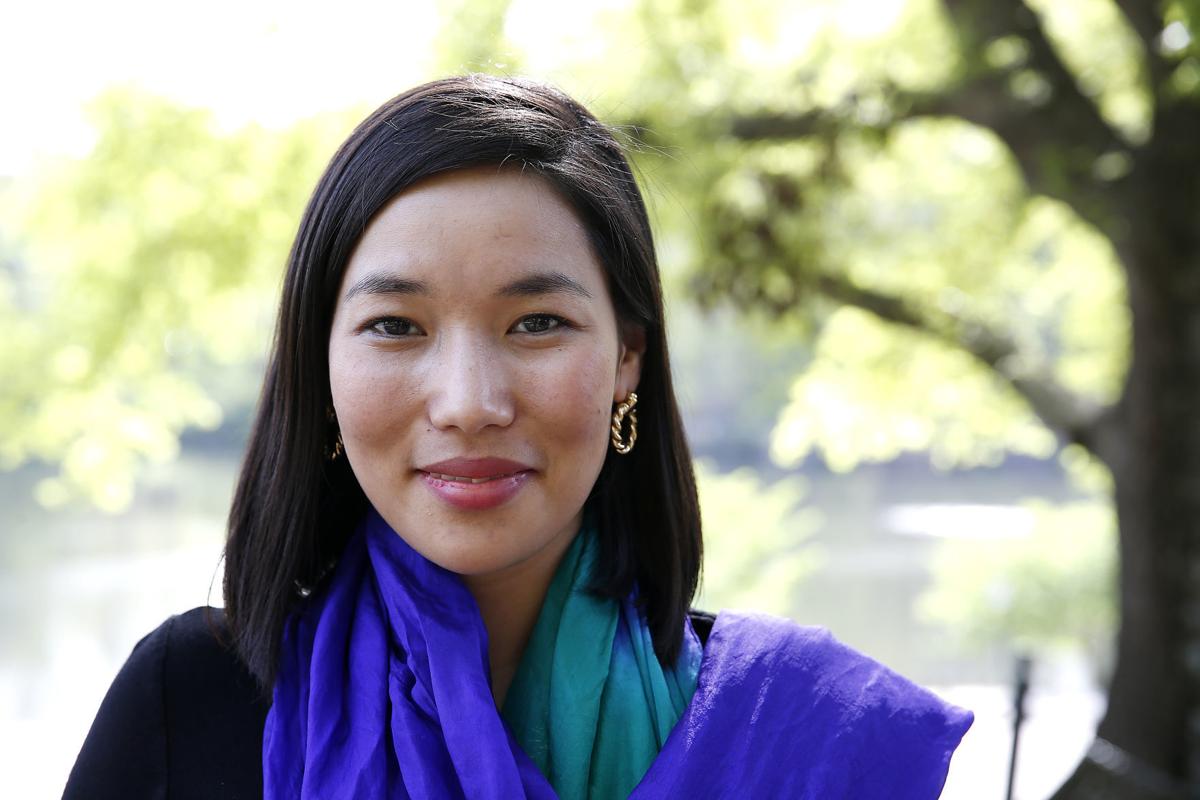 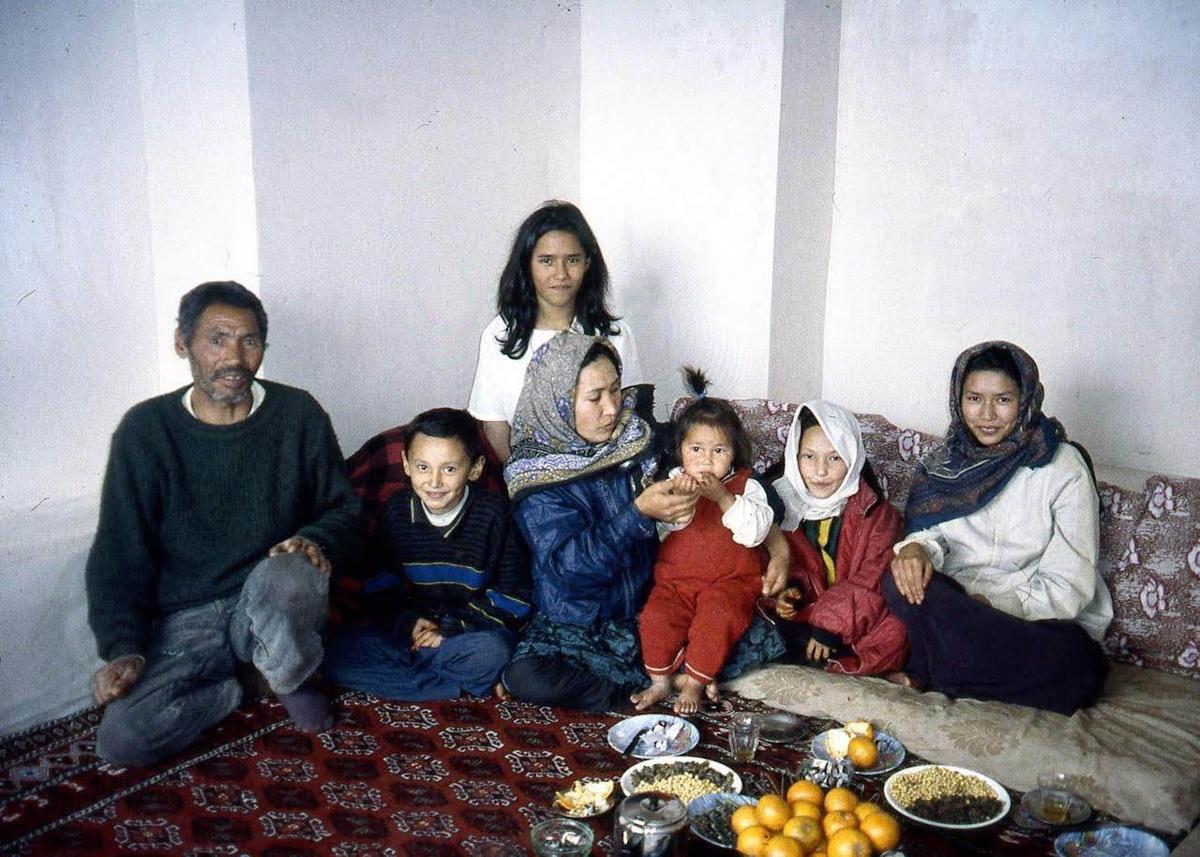 This photo from 1996-97 shows Lina Tori Jan (the baby being held) and family after they returned to Afghanistan. They had been refugees in Iran. 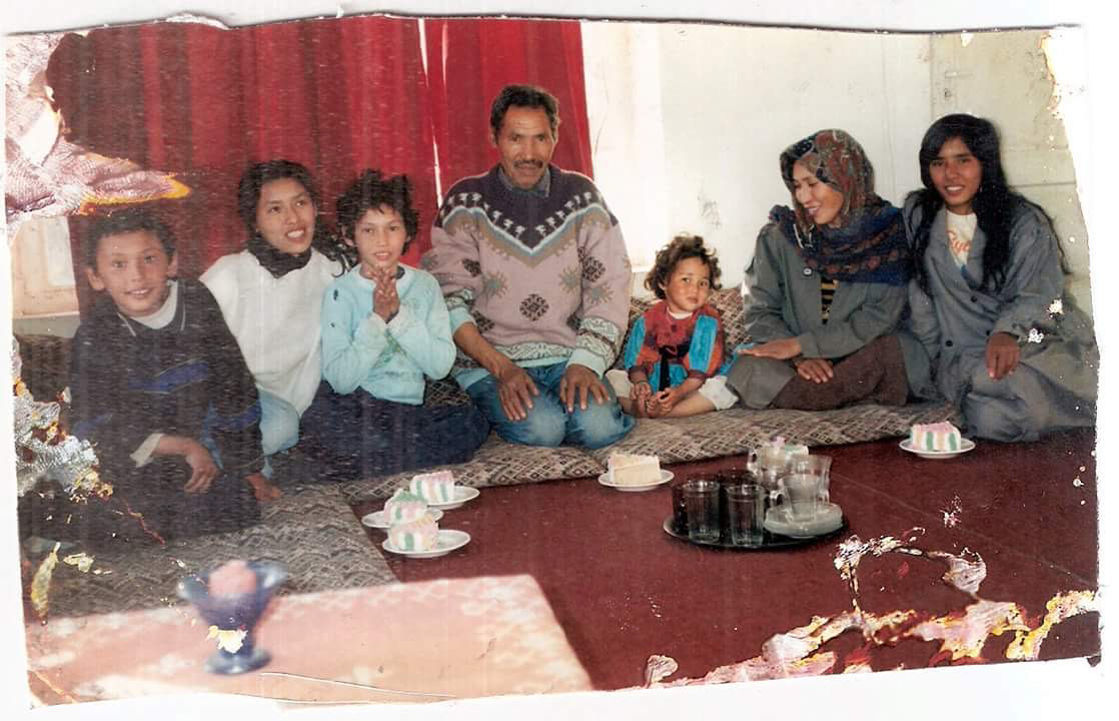 This photo from around 1997-98 shows Lina Tori Jan (the youngest) and her family in a friend's house in Afghanistan. 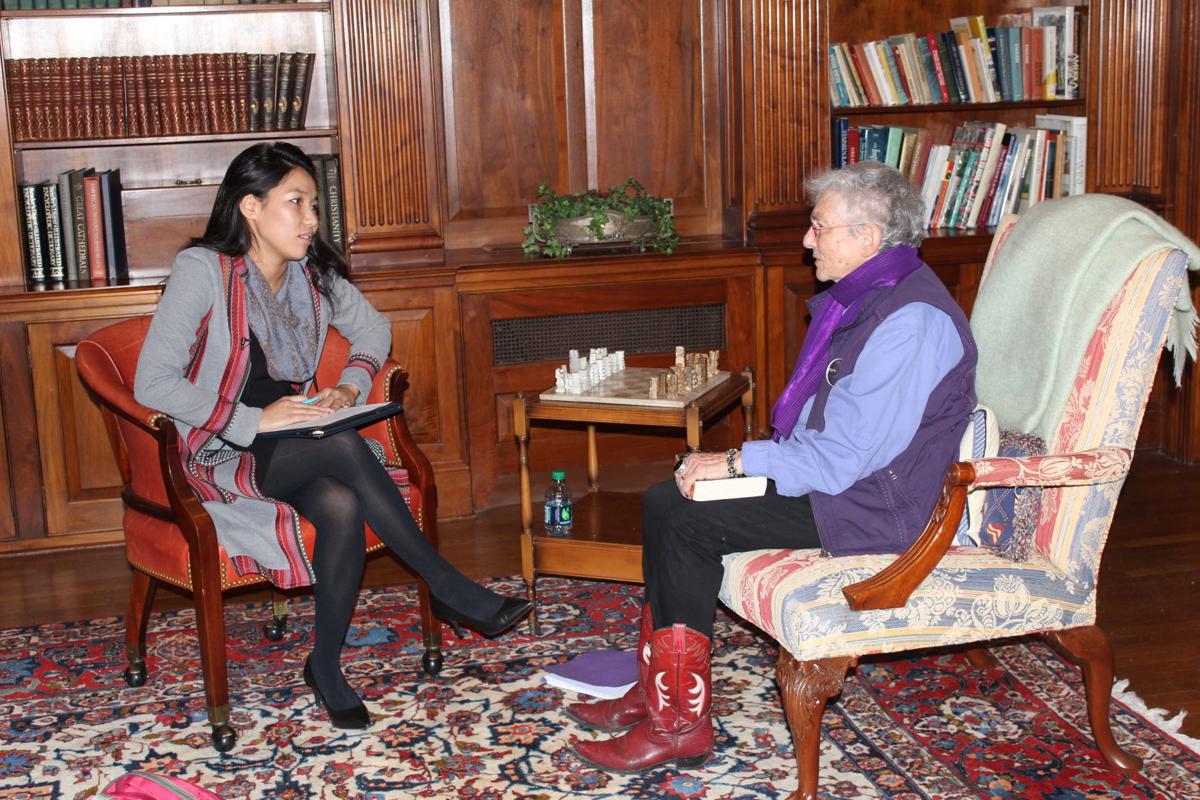 In December 2018, Lina Tori Jan (left) chatted with Blanche Wiesen Cook, an Eleanor Roosevelt expert from New York who visited the University of Richmond to speak at a Jepson Leadership Forum event. 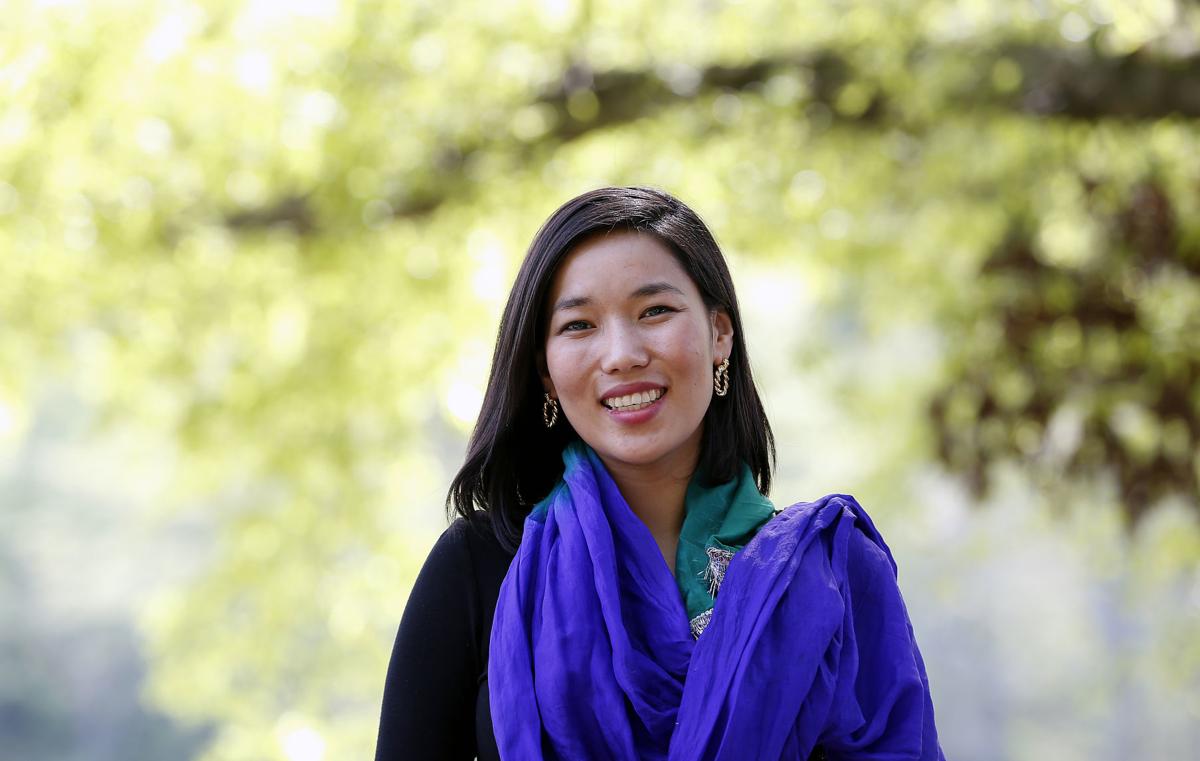 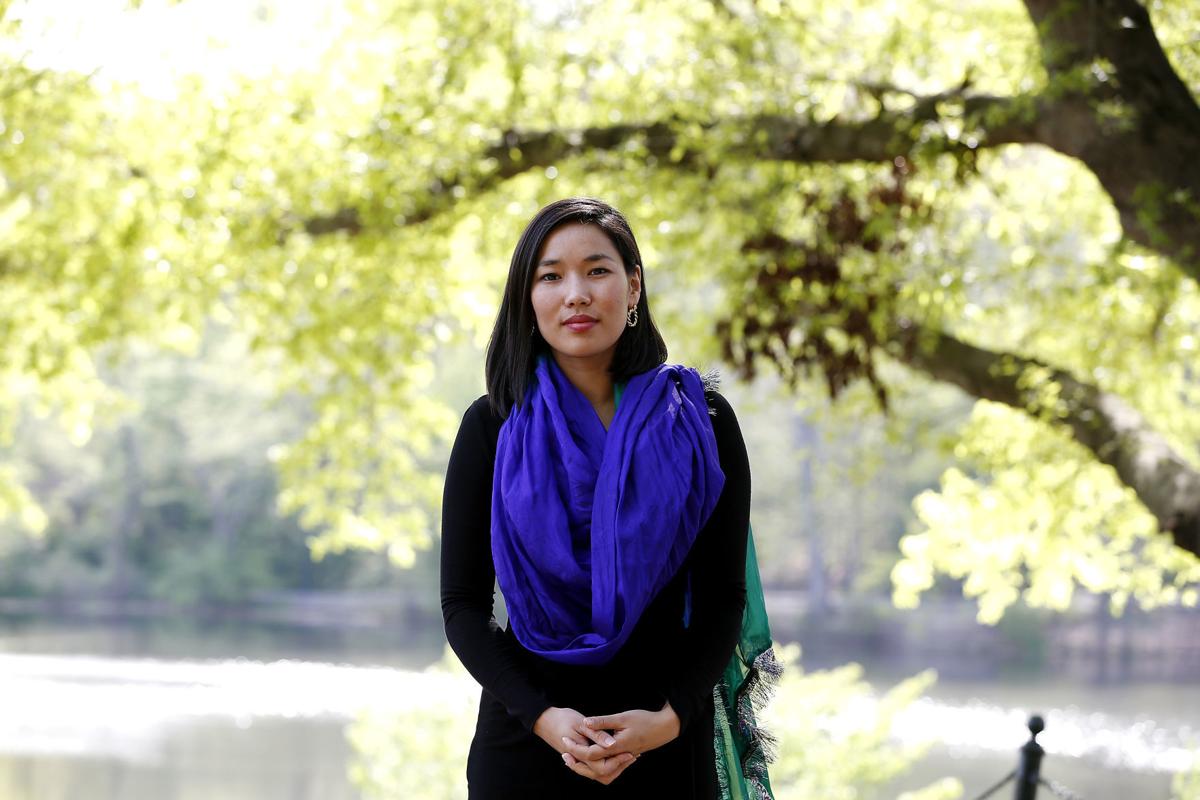 Lina Tori Jan watched as the books went up in flames.

The Taliban, holding power over three-fourths of her native Afghanistan, entered her elementary school and started to burn every book in sight. Their message to Tori Jan and other first-graders was that an education wasn’t attainable.

It didn't intimidate her.

Instead, it motivated her to get a proper schooling – a difficult task as a girl in Afghanistan and as a Hazara, an ethnic minority.

“There’s just so much more to life than to accept what’s given to you,” she said.

Tori Jan is now a rising senior at the University of Richmond, having escaped not only her torched classroom but the basement of a family home where she hid from raids and bombings. Here, she dreams of becoming a U.N. human rights ambassador and promoting liberty.

“She refuses to let the ugliness penetrate her soul,” said Linda Hobgood, UR's Speech Center director and one of her professors.

Lina Tori Jan thinks she's 23 – as she notes, remembering birth years and dates wasn't a priority amid war. In fact, her first memories are of her hiding.

Her parents – a gatekeeper father and bread-selling mother – were born in Afghanistan, but to escape the Soviet occupation, they fled to Iran. Treated poorly there, they decided to return home right after Tori Jan was born. They didn’t know they would be returning in 1996 to the rise of the Taliban, who took control of a country decimated by years of war. Food and water were hard to come by, and 1 in 4 children died before age 5.

The Taliban searched homes, trying to find copies of religious texts other than the Quran, the Islamic holy book. They also sought out Hazaras, the minority ethnic group identifiable by their Asian features.

“We were the target,” Tori Jan said.

She questioned being born a Hazara, asking her parents why people wanted to kill a family just because of their ethnicity. When the raids started, or when bombs would hit her hometown of Herat, her parents would take her and her siblings through their one-floor house and into the kitchen. They’d enter a door that led down to a basement with thick concrete walls.

Tori Jan hid behind the stairwell with one of her sisters. Her parents had dug a hole in one wall to hide books, a television and family pictures. There were a few mattresses and pillows. A stove cooked the potatoes and rice stored in the basement.

A bomb would hit the town, and Tori Jan would put a pillow over her head. She’d cry until she fell asleep, “hoping that by the time I woke up it would be done.”

“I just wanted to make it through,” she said.

Tori Jan spent years like this – living in fear of the Taliban, which made Afghanistan into a haven for Islamic militants, including Osama bin Laden. Then, U.S. troops arrived in 2001 after the 9/11 attacks.

With her father holding her hand, she walked up the basement stairs and outside to watch the Taliban flee her city. Her father, who died in 2015, passed out cookies to neighbors as they celebrated liberation.

“Peace has come. Freedom has come. We don’t have to hide anymore,” Tori Jan said of her feeling in the moment. “We were recognized as human beings again.”

The hiding had even extended to her identity. She sometimes would dress as a boy and even cut her hair short so she could play soccer with other kids – all boys – until they learned her gender.

The Taliban's ouster let her renew her push for an education. A placement exam put Tori Jan into fifth grade as the family moved to Kabul, Afghanistan’s capital.

Her middle school was a two-hour walk away. She’d normally walk with friends, but Tori Jan, a brown belt in karate, would occasionally walk alone. There was some fear of being assaulted during the walk – a somewhat normal thing, she said, but her eyes were fixed on a high school diploma.

“It kept me going in not giving up on life in Afghanistan,” she said of education.

In the classroom, she’d take notes on pieces of cardboard using charcoal. She wanted more.

After studying at the International School of Kabul, Tori Jan took her 7-year-old brother with her to coffee shops that had internet access. She would search high schools in the U.S. and send letters about her interest, while disclosing that she couldn’t afford application fees.

She found a one-year exchange program. Jack Eidam, the dean of admissions and financial aid at Wyoming Seminary college preparatory school in northeast Pennsylvania, knew he had to have Tori Jan at the school as soon as he was forwarded her application. She arrived in July 2014 for a summer English as a Second Language program.

“She and her family were not particularly well-positioned with regard to the Taliban,” Eidam said. “To be able to bring that kind of perspective to our community and help our student body – and our faculty – understand the duress under which people who are not strict adherers to Taliban traditions go through was incredibly valuable.”

The school in Kingston, Pa., was a far cry from still-turbulent Afghanistan. It was peaceful, Tori Jan said, and she didn’t have to live in fear for her own safety. Instead, she experienced guilt.

In the dining hall, she had a hard time even swallowing food because she didn’t know what her family had to eat that day. She also worried about their safety.

“Those things were heavy on my heart,” she said. “You’re always worried about getting a phone call that somebody was killed.

“That’s the reality of life there.”

Instead of one year at Wyoming Seminary, Tori Jan spent two and finished her high school studies. She achieved her dream of getting a degree – more than 6,500 miles from where she hid in a basement while being deprived of a formal education.

Lina Tori Jan had never set foot on the University of Richmond campus when she applied early decision to the school.

The university offered her a full scholarship, giving her the chance to further her education. After initially worrying that she didn’t have the confidence to go to college, she has thrived since her arrival in August 2016.

Tori Jan is a double major in leadership studies and political science, and she hopes to create change through government. She was named in March 2019 as a Newman Civic Fellow, a yearlong honor for students interested in leadership and solving public problems. She became just the second UR student to earn the honor.

“The Taliban stripped many people of their right to participate in society, confining one of the fundamental values a person can have,” Tori Jan said when she earned the fellowship. “They shut down schools, burned books, falsely accused and imprisoned individuals, and prohibited women and minority groups from public appearance.

“This experience ignited the desire to transcend social boundaries and fight for my right to education while advocating for the rights of others through community service.”

Tori Jan is also a Bonner Scholar, one of 25 UR classmates to be matched with nonprofits, schools or government agencies to tackle social issues for 10 hours a week. In her first year at UR, she interned with the International Rescue Committee, working with refugees and immigrants who resettle in the U.S.; she also taught an English as a Second Language class and hosted another class for refugees to talk about adapting to U.S. culture.

“I know there are a lot of hardships when you come from another country to here,” she said.

During her junior year, Tori Jan interned with the Office of the Secretary of the Commonwealth, working on rights restoration for people released from prison.

“She understands what it means to be shut out from what she considers to be a human right, which is education,” said Sylvia Gale, the director of the Bonner Center for Civic Engagement. “That is what she sees happening here in our system when we shut out people who have been convicted of crimes and done their time and we continue to deprive them of a basic right to vote.”

Tori Jan has shared her story at UR and captivated many, including her peers in a public speaking class she took in the fall of 2017. Each student was required to give four major speeches, and one by Tori Jan on how she ended up at UR especially drew her classmates’ attention, said Hobgood, her professor.

They listened as the soft-spoken student shared details of hiding in her basement, dressing as a boy and fighting for an education.

“So many of them were removed from the kind of experiences Lina had,” Hobgood said. “It’s bigger than Lina, and she’s trying to give you a sense of what’s going on halfway across the world and what we’re taking for granted that we have no business taking for granted.”

In spring 2019, Tori Jan was the keynote speaker at the Gulf-South Summit on Service-Learning and Civic Engagement Through Higher Education, held near Houston. She again told the story of her childhood in Afghanistan and the good she’s trying to make of it.

The last sentence of her speech put into perspective how her message of hope is grounded in perseverance.

"Freedom," she told the audience, "is anything but free.”

Lina Tori Jan, a rising senior at the University of Richmond, grew up in Afghanistan and remembers hiding from the Taliban in the basement of her home. "I just wanted to make it through," she said. (FOR ADDITIONAL IMAGES, CLICK ARROWS IN UPPER RIGHT OF PHOTOS.)

This photo from 1996-97 shows Lina Tori Jan (the baby being held) and family after they returned to Afghanistan. They had been refugees in Iran.

This photo from around 1997-98 shows Lina Tori Jan (the youngest) and her family in a friend's house in Afghanistan.

In December 2018, Lina Tori Jan (left) chatted with Blanche Wiesen Cook, an Eleanor Roosevelt expert from New York who visited the University of Richmond to speak at a Jepson Leadership Forum event.