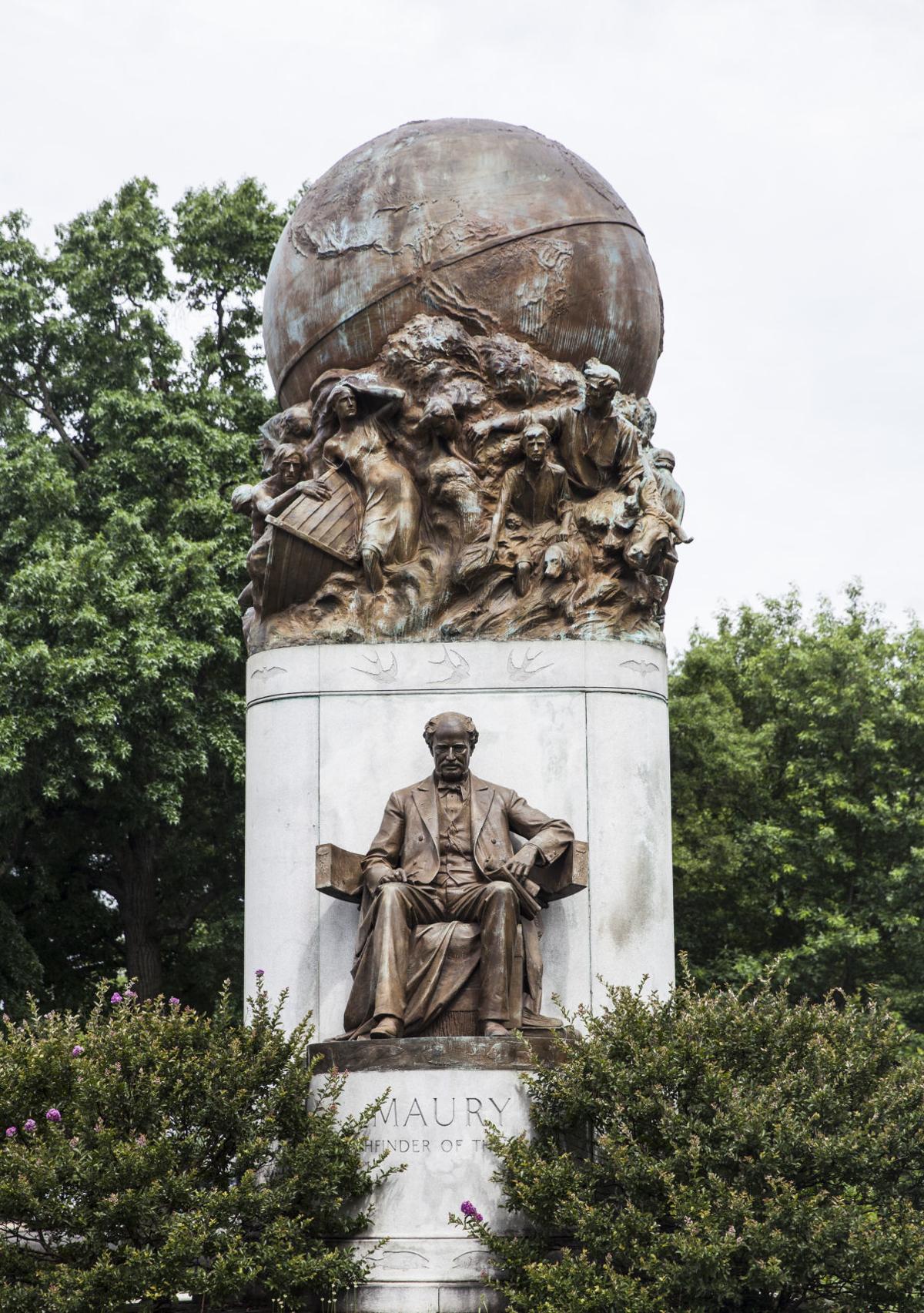 Sculptor Frederick William Sievers said his design “may be termed an allegory of the sphere of Maury’s mind.” 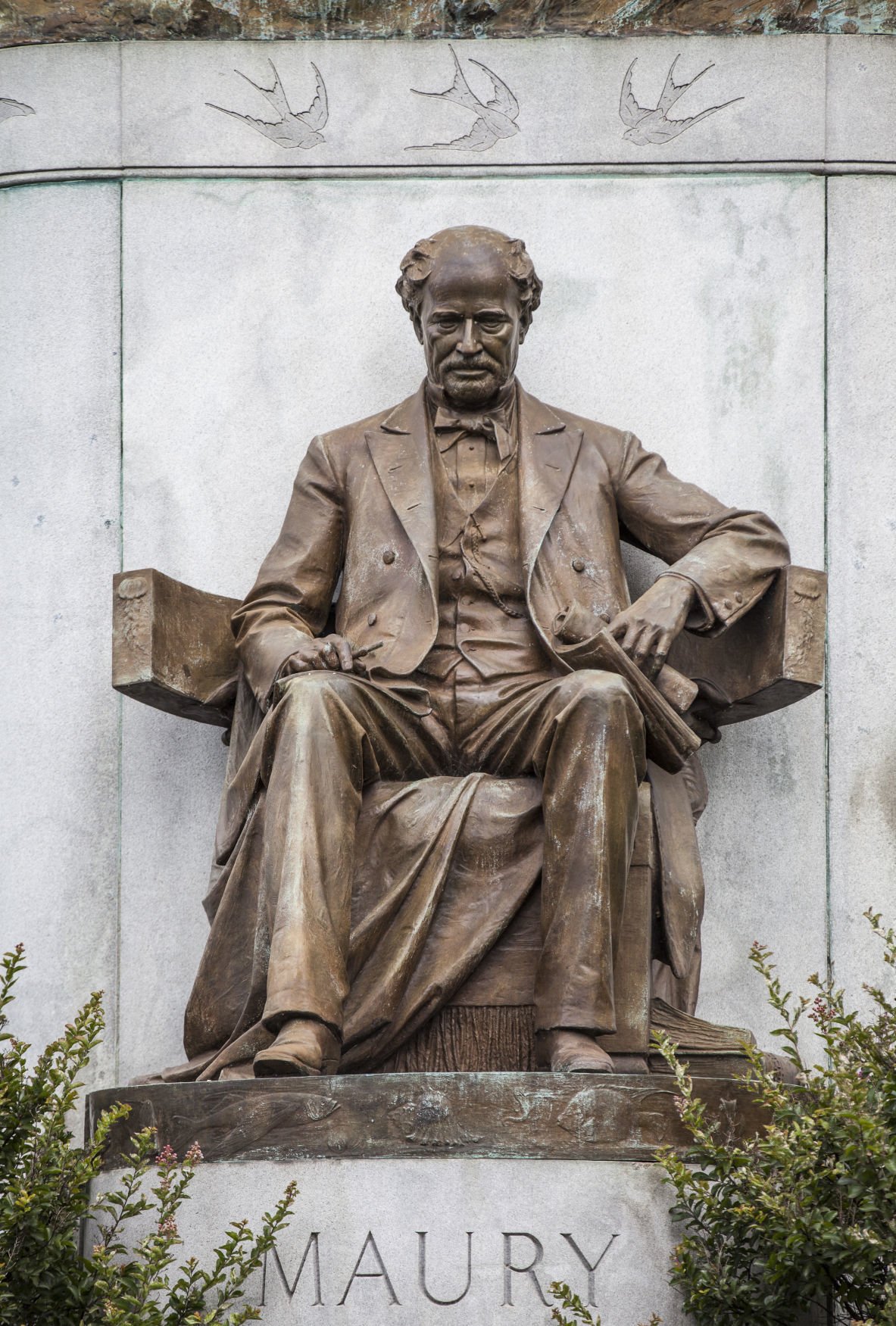 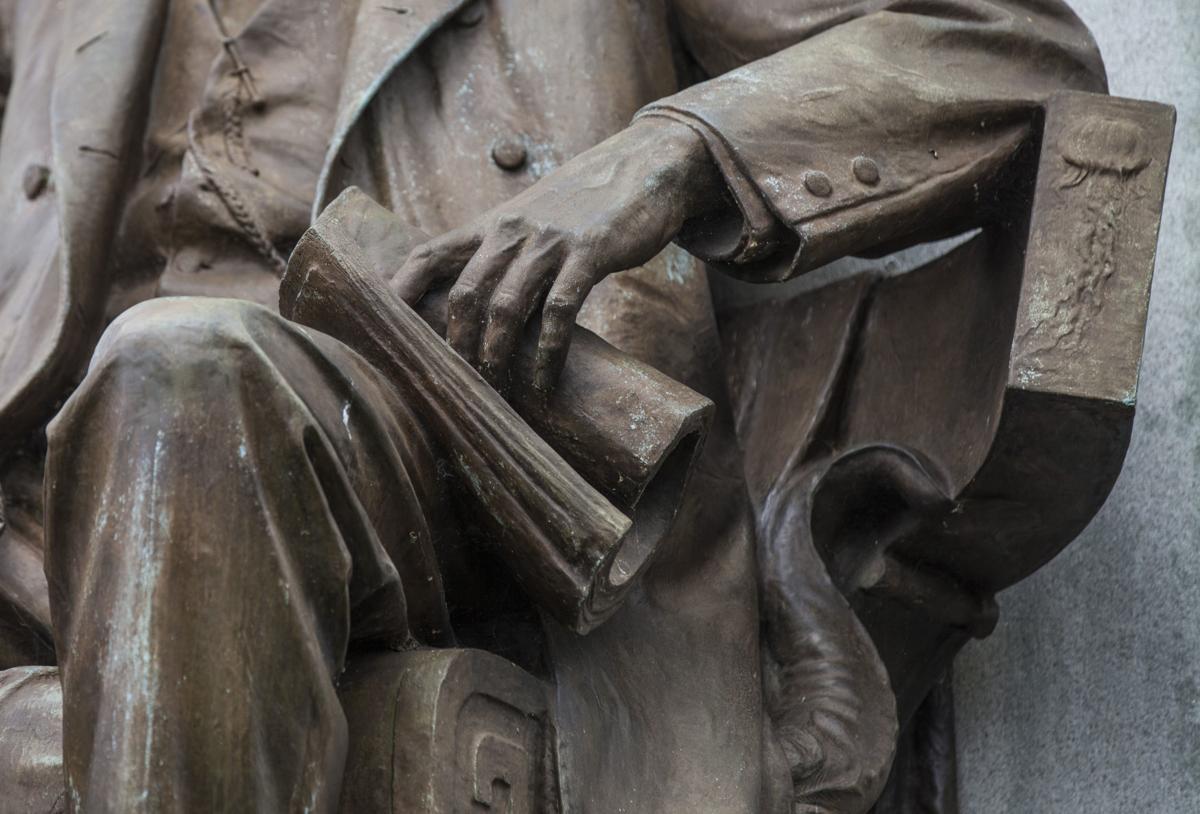 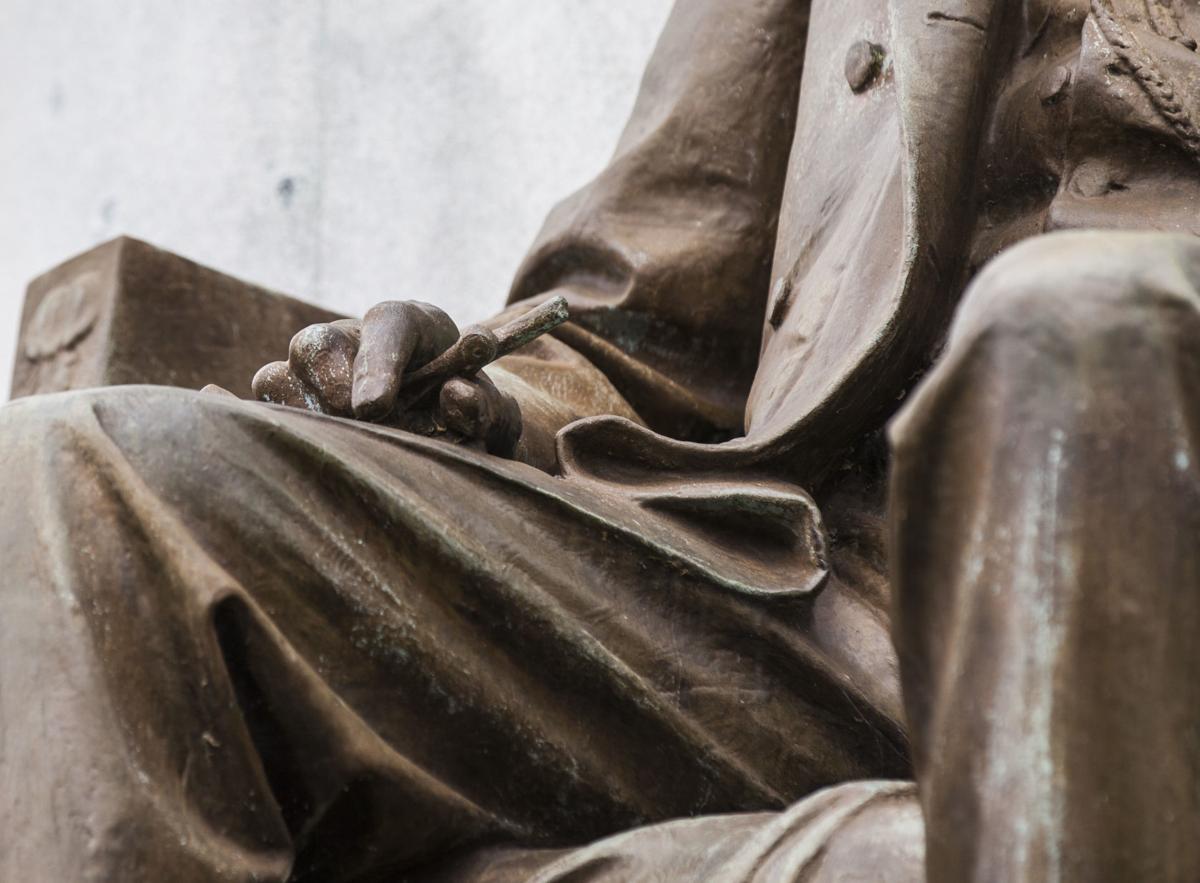 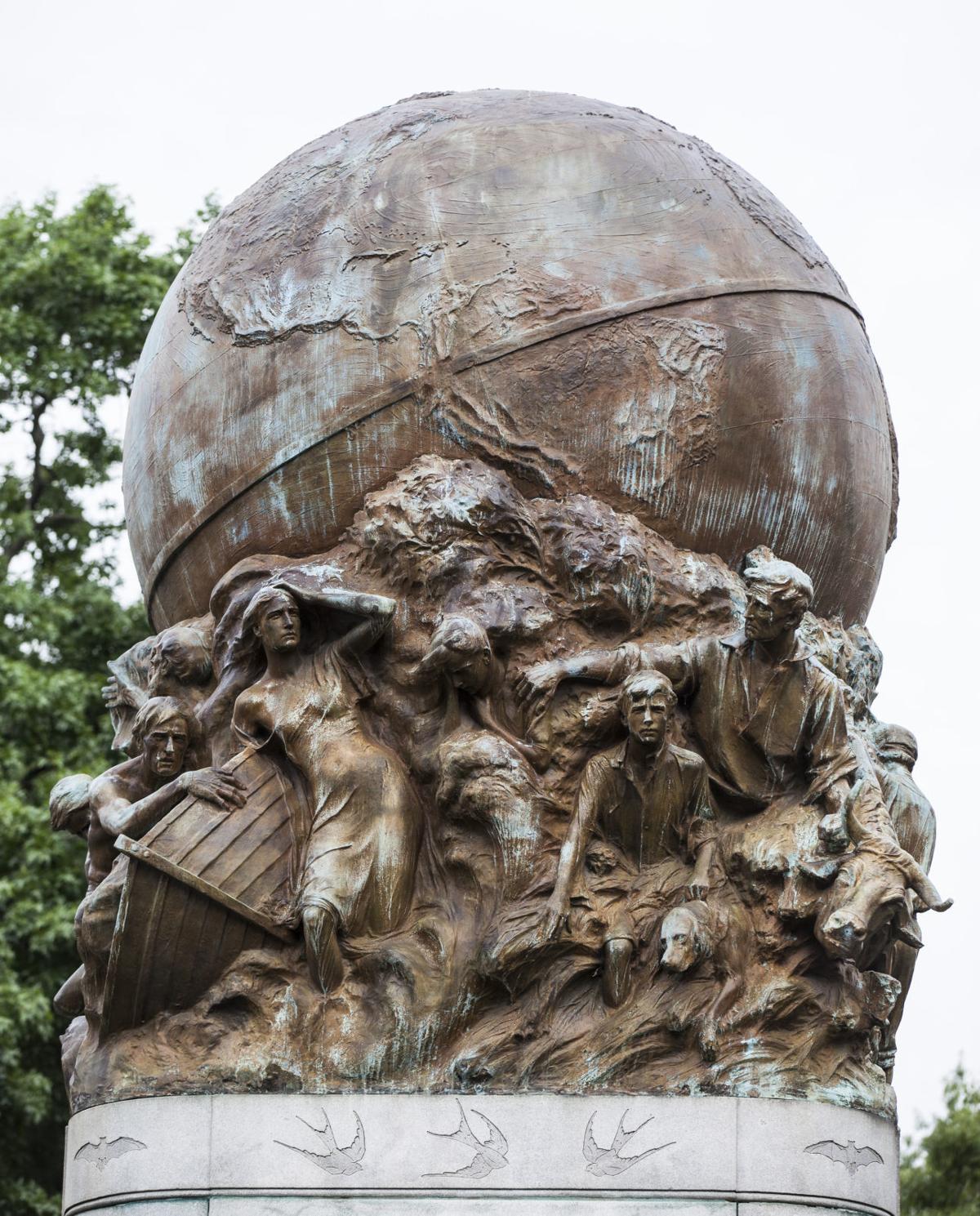 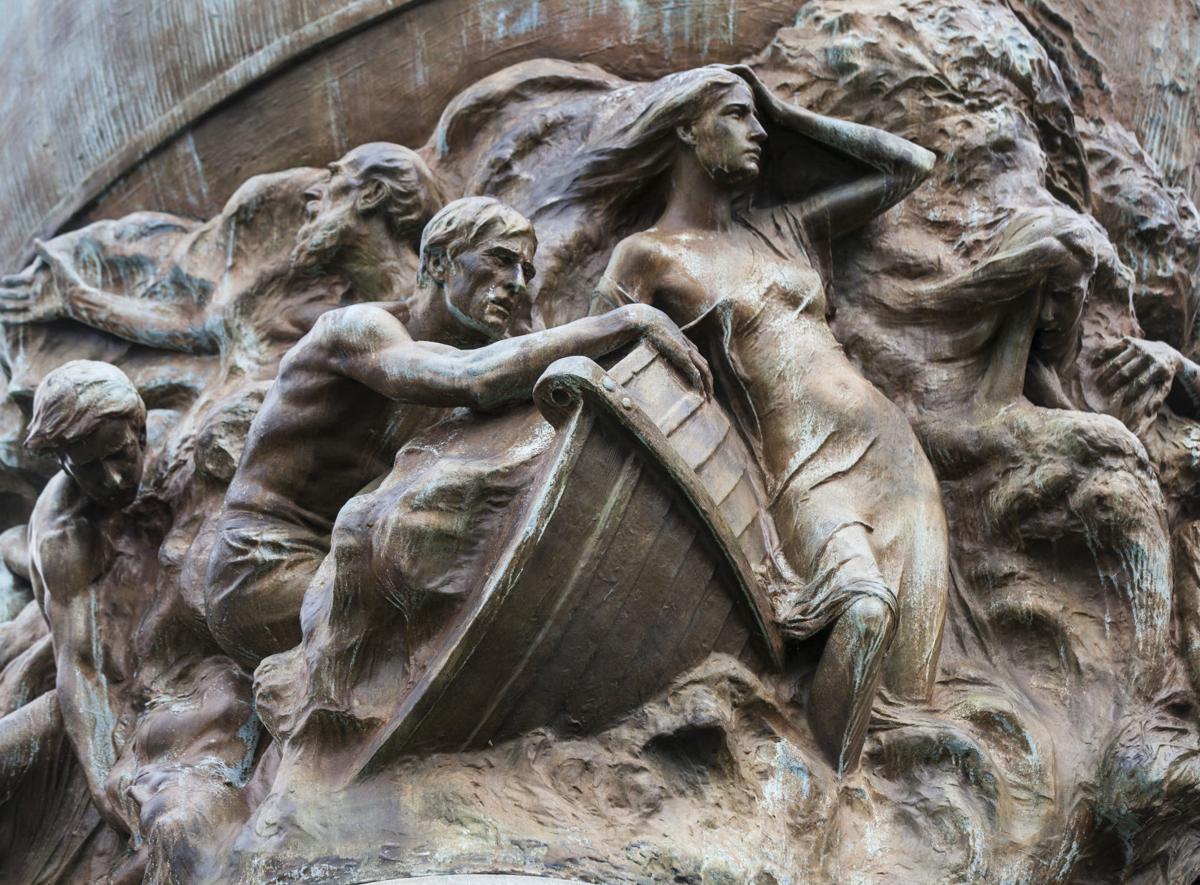 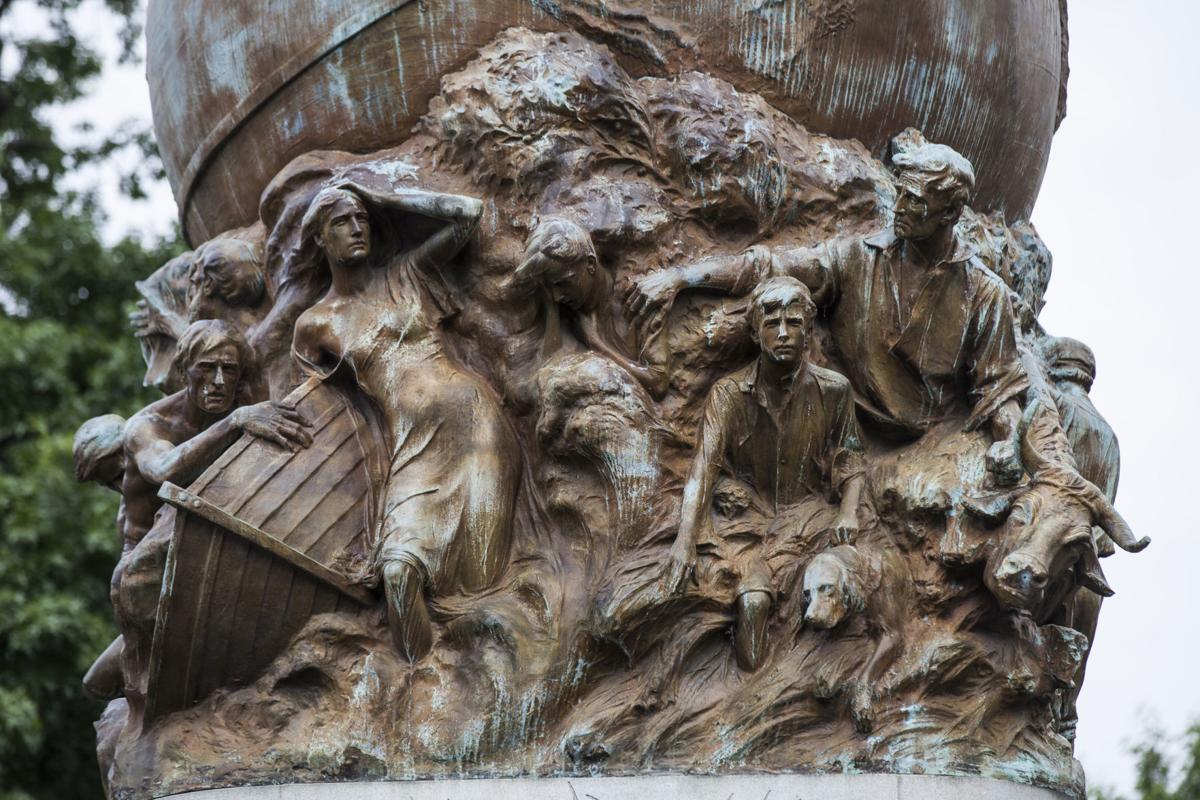 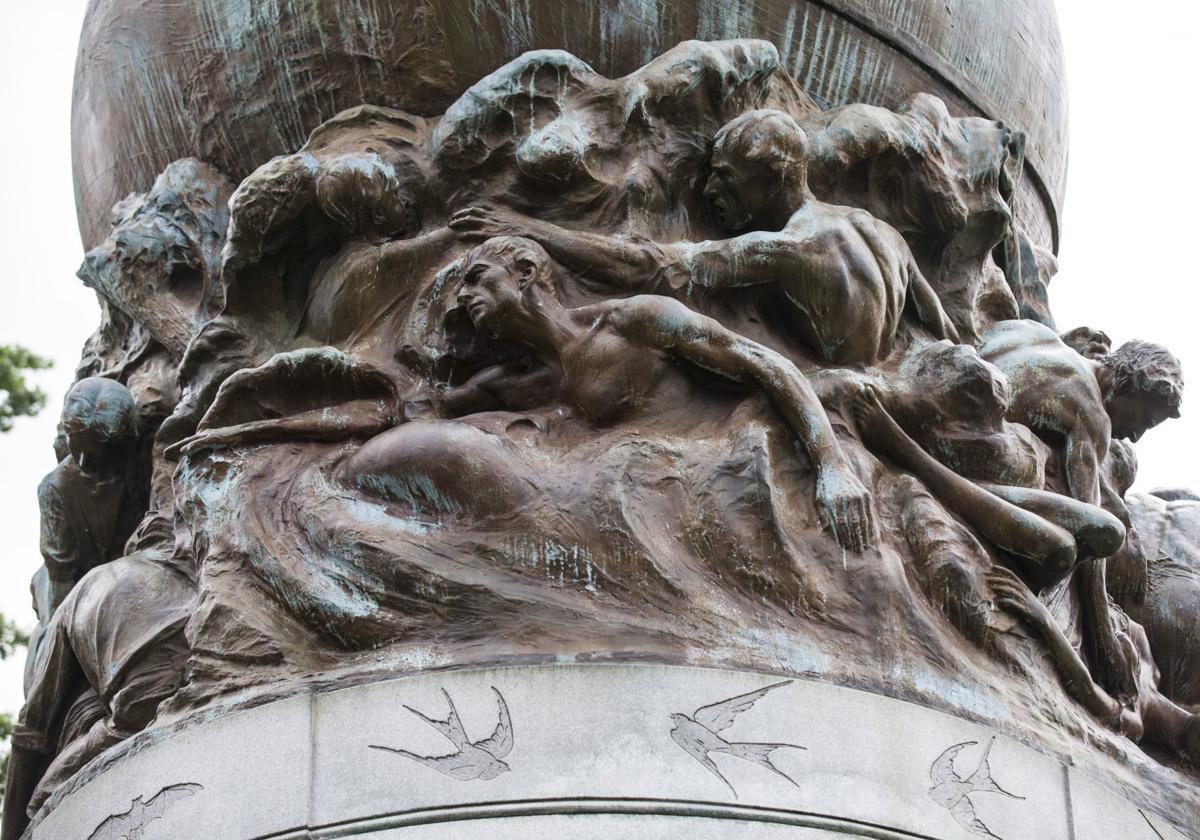 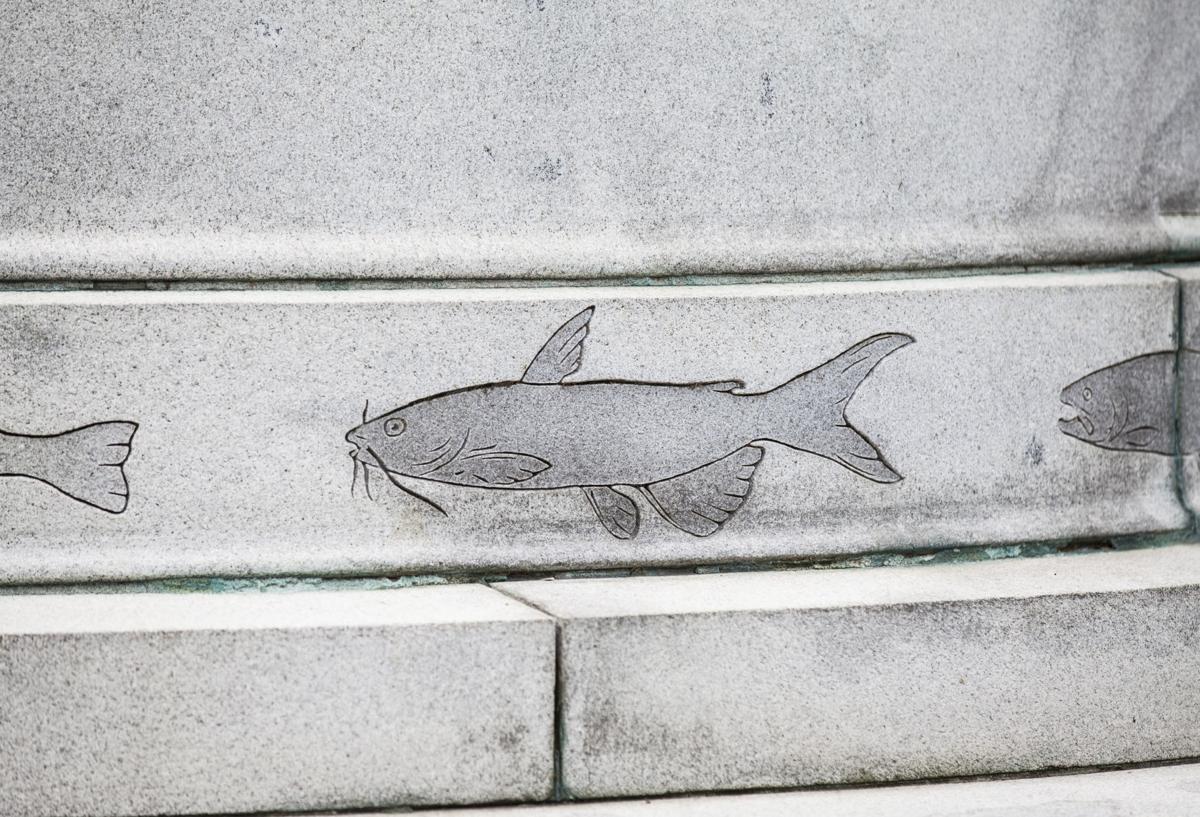 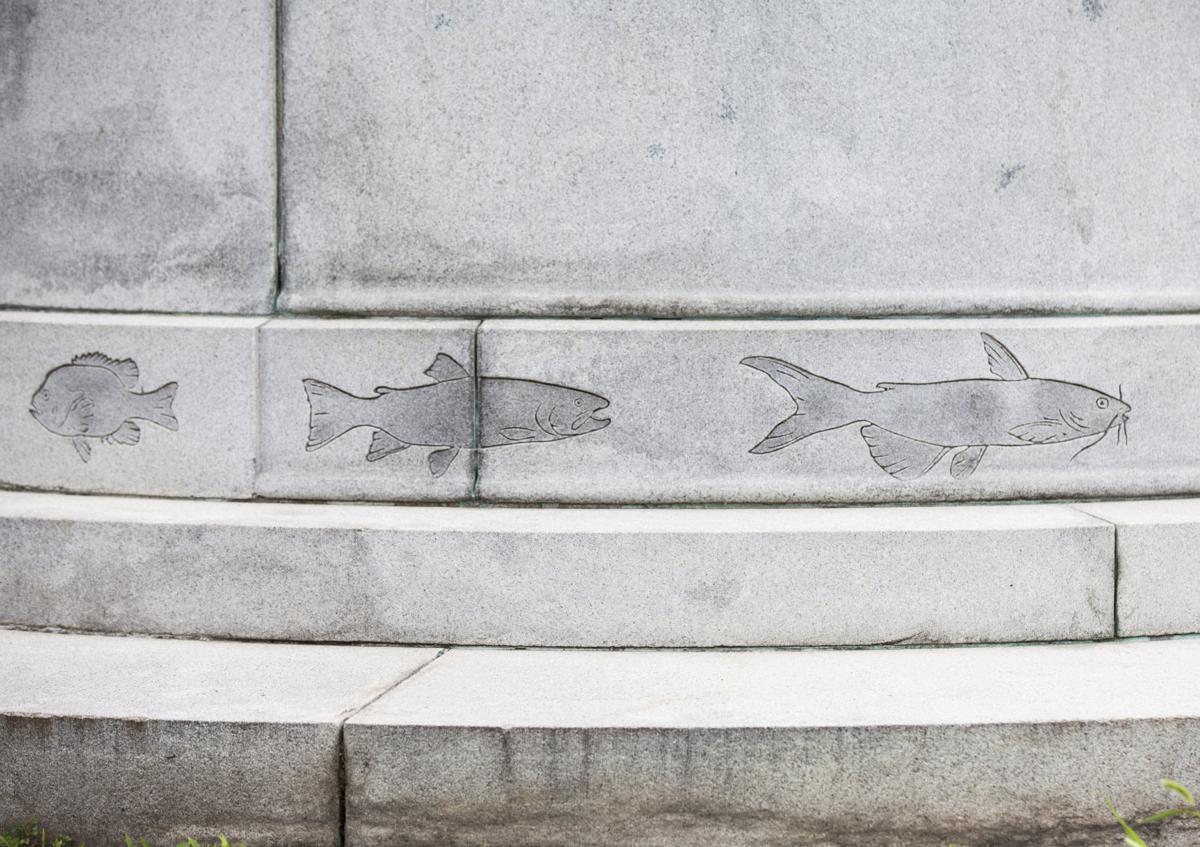 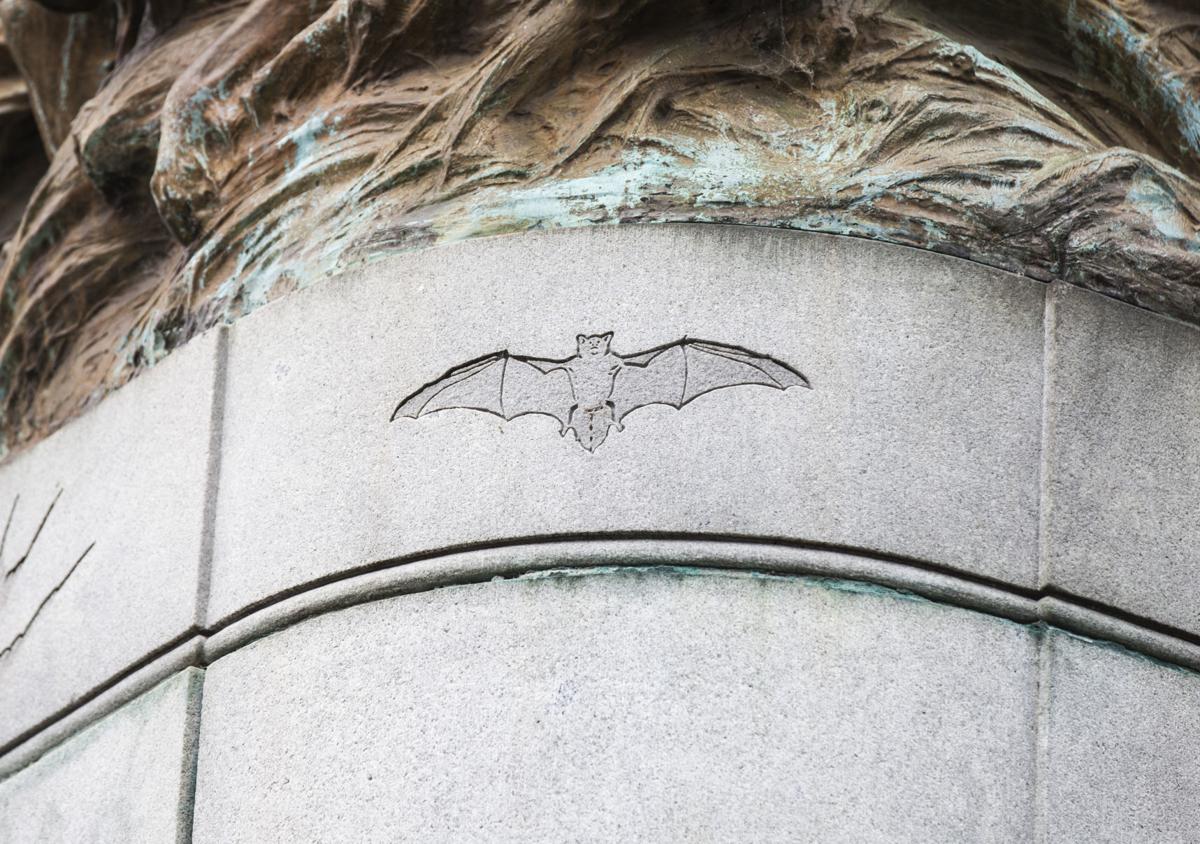 Monument Avenue is famous for its statues of Confederate leaders. Lee, Stuart and Jackson sit atop their steeds. Davis gazes on foot upon Richmond.

But the fifth Rebel – the man with the world above his shoulders – is an oddball.

Yes, he was an officer in the Confederate navy during the Civil War. But Matthew Fontaine Maury – the “Pathfinder of the Seas" – was better known for his work in oceanography and other sciences before the Civil War.

The statue at Monument and Belmont avenues in the Museum District reflects those achievements. Under a stormy globe, Maury is surrounded by fish, birds, bats and other creatures.

"It was so different from the others on Monument Avenue," said John Grady of Fairfax County, who came across the Maury monument almost by accident years ago. Grady later wrote the biography, "Matthew Fontaine Maury, Father of Oceanography."

Shortly before the Maury monument's unveiling in 1929, Sievers shared with the RTD his mindset about the new work: "The whole idea may be termed an allegory of the sphere of Maury's mind, which was nothing less than the entire universe."

In representing a storm on land and sea, Sievers said he uses fish to symbolize general marine investigation, while shells denote mapping the sea floor. Swallows and bats represent the air by day and night. The globe symbolizes geography, and wind suggests meteorology. He said the humans are looking forward, with hope, for Maury's help.

Maury holds sea charts and a compass, and he "is portrayed in a reminiscent attitude, listening to the voice of the storm," the sculptor said.

In a book about Monument Avenue, author Matthew Mace Barbee wrote that the Maury monument was "remarkably modern. ... Sievers' design not only emphasized the global importance of Maury's penetrating knowledge, it marked an important break from the visual rhetorics of the Lost Cause" – a school of thought that glorified the Confederacy.

The statue was unveiled on Nov. 11, 1929 – the 11th anniversary of the armistice that ended World War I. The next day, an RTD editorial took note of some interesting context.

Famed inventor Thomas Edison had been feted prominently three weeks earlier for his scientific achievements. Maury had died more than a half-century before – in 1873, at age 67 – "but at home he remained unsung." The editorial noted that he "was ever a modest gentleman. He never presumed to seek honor."

Born in 1806 near Fredericksburg, Maury spent his youth in Tennessee. He entered the U.S. Navy at 19. He went on to become an oceanographer, meteorologist, cartographer, author and educator, among other pursuits.

"Although he never fought a battle and was prone to seasickness, Maury became one of the U.S. Navy’s most accomplished officers," according to an American Civil War Museum article. An 1839 accident "left him lame and unfit for sea duty," so the Navy assigned him to a post in Washington, "from which he supervised the charting of the world’s oceans."

Maury's writings included “The Physical Geography of the Sea” in 1855, often called the first textbook of modern oceanography. His ocean-floor studies provided data used to lay the trans-Atlantic telegraph cable.

Maury's contributions to the Confederacy included improvements to underwater torpedoes, or mines.

After the war, Maury joined the faculty at Virginia Military Institute. He died on Feb. 1, 1873, in Lexington and is buried in Hollywood Cemetery in Richmond.

"Maury’s death prompted a flood of eulogies and remembrances from all over the world," Brumfield wrote. "The March 20, 1873, issue of the British journal Nature, for example, stated that Maury was the first to show meteorology was indeed a science. The Oct. 20, 1888, Saturday Review admitted that scientific ocean navigation was practically nonexistent before Maury’s work."

In his address at the statue's unveiling in 1929, as reported in the RTD, Gov. Harry F. Byrd Sr. took note of some of Maury's last words: "On the evening before his death ... he asked his son, Richmond, 'Are my feet growing cold? Do I drag my anchors?' When his son answered 'yes,' Maury replied, in the language of the seaman's watch of the night, 'All's well.' "

11:18 a.m.: Crews moved from Maury to the cannon on the west side of the Ashe statue now.

Sculptor Frederick William Sievers said his design “may be termed an allegory of the sphere of Maury’s mind.”