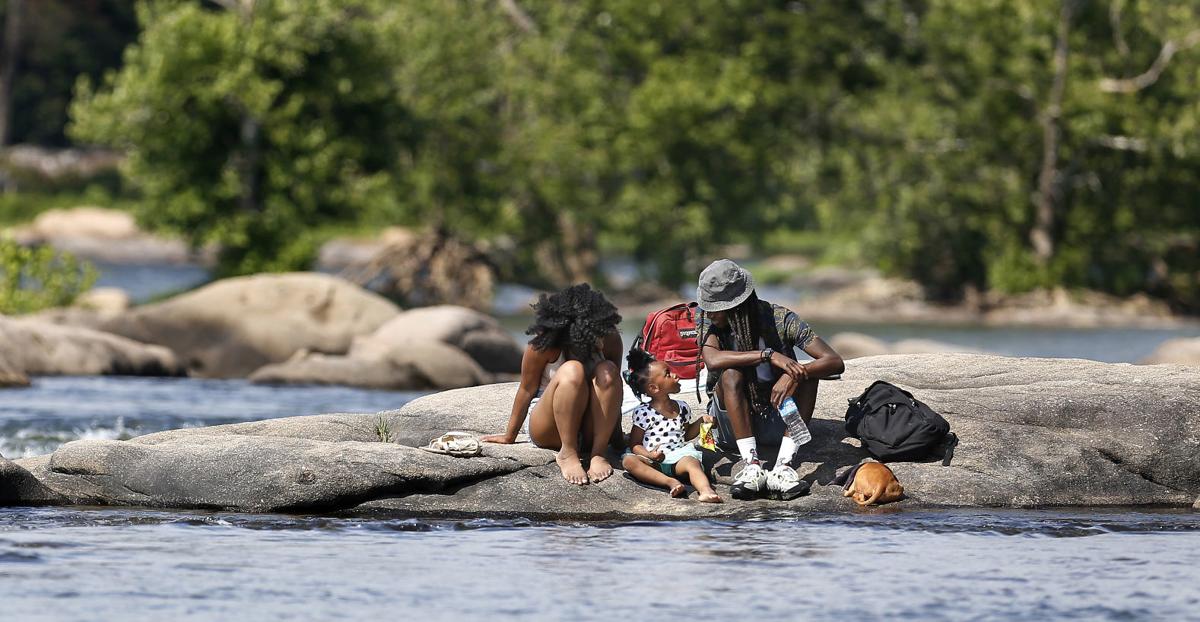 People sit on the rocks in the James River at Belle Isle. 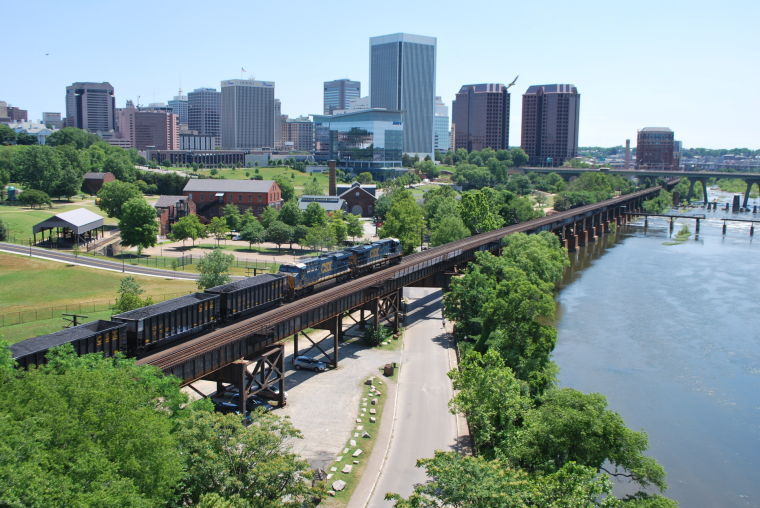 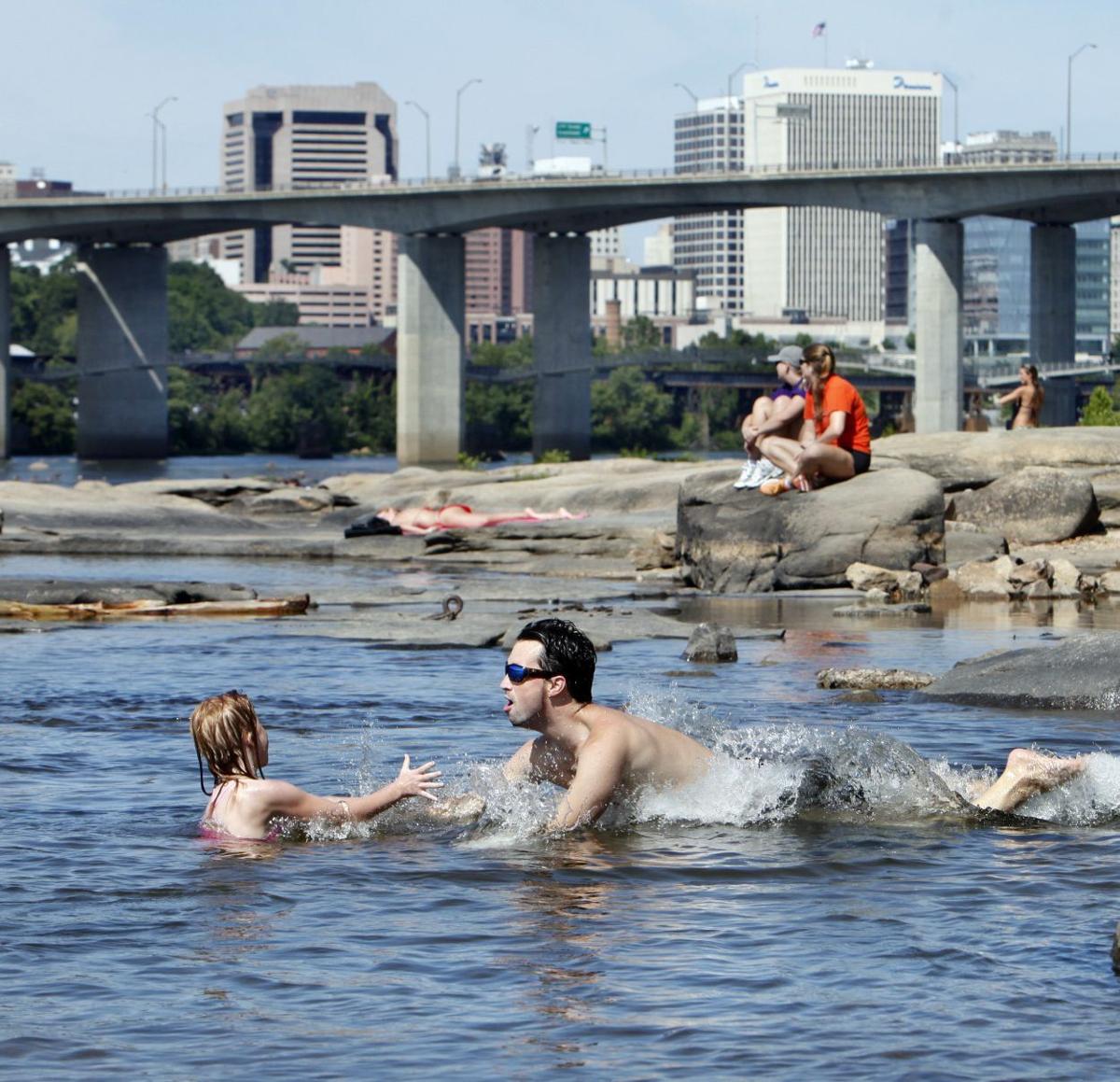 Harley Syephens (right) plays with his niece, Mackenzie Gower, 6, in the James River at Belle Isle, July 12, 2013. They live in Sandston.

"America's Founding River" was once so polluted in Richmond that it was largely avoided. But within the past four decades, the James was embraced as the region's outdoor treasure. It was cleaned up, its historic canal system was reclaimed, and the downtown riverfront became a destination.

The James is the only urban waterway with Class III and IV rapids, but it's also mild enough in spots for children. A magnet for water recreation, the expansive James River Park System has more than a dozen segments from the Huguenot Bridge to beyond the Interstate 95 bridge downtown.

And in a typical year, more than 100,000 people would hit the riverfront for the Richmond Folk Festival and Dominion Riverrock, the largest outdoor sports and music festival in the United States.

Here are some of the popular features on or along the river.

Pony Pasture Rapids: This is a popular family-friendly spot for wading, sunbathing and rock-hopping. Located off scenic Riverside Drive on the south bank, Pony Pasture features granite boulders that allow rivergoers to venture into the James without getting too wet – but the water is usually calm enough for swimming and rides down the Class II rapids. And the name? The Brauer family kept ponies on a farm in the area up until the 1960s.

Williams Island: For a more secluded experience, head to Williams Island, a 95-acre wildlife area near Pony Pasture that is flanked by two dams. The island is accessible by boat, swimming and, when the river is low, rock-hopping.

Main Area: This 2½-mile stretch on the south bank, which includes the park system's headquarters at Reedy Creek, extends from the Atlantic Coast railroad bridge to the Manchester Climbing Wall. The popular Buttermilk Trail runs through the area.

Belle Isle: The island was the site of an open-air prison for Union soldiers during the Civil War. Today, the loop around it is used by joggers and cyclists, and its rocks are a notable spot for sunbathing, wading and drinking in views of the river and downtown skyline. It can be reached from the north bank via a pedestrian span that runs beneath the Robert E. Lee Bridge.

Brown's Island: A popular staging area for concerts and festivals, Brown's Island features a monument called "The Headman," a tribute to the skilled Black boatmen who navigated the James and its canals.

T-Pot Bridge: In late 2016, the T. Tyler Potterfield Memorial Bridge opened to great acclaim. Built atop an old dam walk, the pedestrian and cycling span connects Brown's Island to Manchester on the south bank of the James.

Canal Walk: The brainchild of George Washington, the James River canal network was designed to facilitate commerce. During the 1850s, nearly 200 boats passed through regularly, with barges bringing raw materials from western Virginia and returning with products from the city. Remnants of this system are part of the James River and Kanawha Canal Historic District. Check out the James River Power Plant murals, which is an outdoor art gallery along the Canal Walk.

Pipeline Walk: Often described as downtown's best-kept secret, this is a catwalk atop a large city sewer pipeline that runs beneath the CSX viaduct along the riverfront. Follow the signs for access at the south end of 12th Street.

Civil War history: The American Civil War Museum is based at Tredegar, the primary iron and munitions works for the Confederacy. And the 1865 Exhibit, on part of the T-Pot Bridge overlooking the James off Brown's Island, features historical markers documenting the fall of Richmond during the war's waning days.

Virginia Capital Trail: The 52-mile bicycle and pedestrian route connects Richmond to Jamestown, starting along the James at Great Shiplock Park in Shockoe Bottom. The paved path follows the state Route 5 corridor through parts of Richmond and the counties of Henrico, Charles City and James City. Riders pass dozens of historic properties along the scenic byway, and the stretch through Chickahominy Riverfront Park offers beautiful water views.

Out and about: the James River, museums and other great destinations

People sit on the rocks in the James River at Belle Isle.

Harley Syephens (right) plays with his niece, Mackenzie Gower, 6, in the James River at Belle Isle, July 12, 2013. They live in Sandston.